We all know Giannis loves the WWE.

And he’s dominating the competition like your favorite pro wrestler would.

Reigning NBA MVP Giannis Antetokounmpo is the overwhelming favorite to win the award for the second year in a row.

"Giannis is in the midst of what will go down as one of the greatest regular seasons ever. In the last 2 years, there's been no one in the regular season, including LeBron, on Giannis' level." — @getnickwright pic.twitter.com/xyjevAWVQH

The Greek Freak has also led the Milwaukee Bucks to the best record in the NBA at 50-8, and the Bucks are now the fastest team to reach 50 wins since the 2015-16 Golden State Warriors, who started 50-5 and set an NBA record with 73 wins.

But it’s not just all the wins that are impressive.

It’s how they’re winning and who they’re beating. 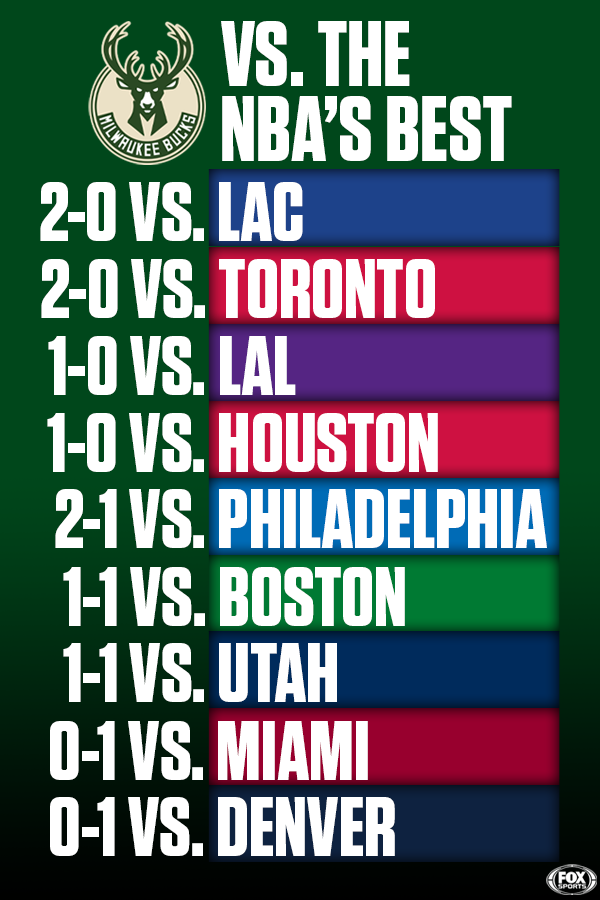 Let’s dive in to exactly how good the Bucks have been.

Milwaukee has lost only a single game to a team below .500. Against the rest of the top 10 teams in the league – Miami, Houston, Boston, Utah, Denver, Philadelphia, Toronto, the LA Lakers and the LA Clippers – the Bucks 10-5, a winning clip of 67 percent.

Furthermore, Milwaukee hasn’t endured a two-game losing streak and boast a +12.4 point differential, which is the best of any team in NBA history.

"This year is the best opportunity for Giannis [to win a championship]. The talent is still in the West, KD isn't playing, Jayson Tatum is only getting better, Philly is a year from figuring it out. It's a great year for the Bucks come out of the East." — @GottliebShow pic.twitter.com/bmTp4p2jqg

With that said, if the Bucks don’t make it to the NBA Finals this year – and win – who do they have to blame but themselves?

"If somehow, some way the Bucks don't make the NBA Finals it's going to be self-inflicted. … I don't see Toronto, Miami, Philly or Boston being able to throw a real scare into Milwaukee." — @getnickwright pic.twitter.com/u719b0HKdc

Take into account that of their 50 wins, 33 have come by double digits.

The Bucks are an absolute juggernaut.

"The Bucks are the best team. They're going to get to the Finals. … We don't talk about Khris Middleton enough. He's a 50-40-90 guy. Giannis is playing at an MVP level. The defense is unbelievable. They're head & shoulders better than anyone in the East." — @WalkerAntoine8 pic.twitter.com/lRajN6nkam

The scary part for the rest of the league is that no Milwaukee player – not even their superstar – ranks in the top 50 of minutes played in the NBA this season.

Yes, the Bucks are indeed running away with this thing.

We’ll see if the rest of the league can catch up.