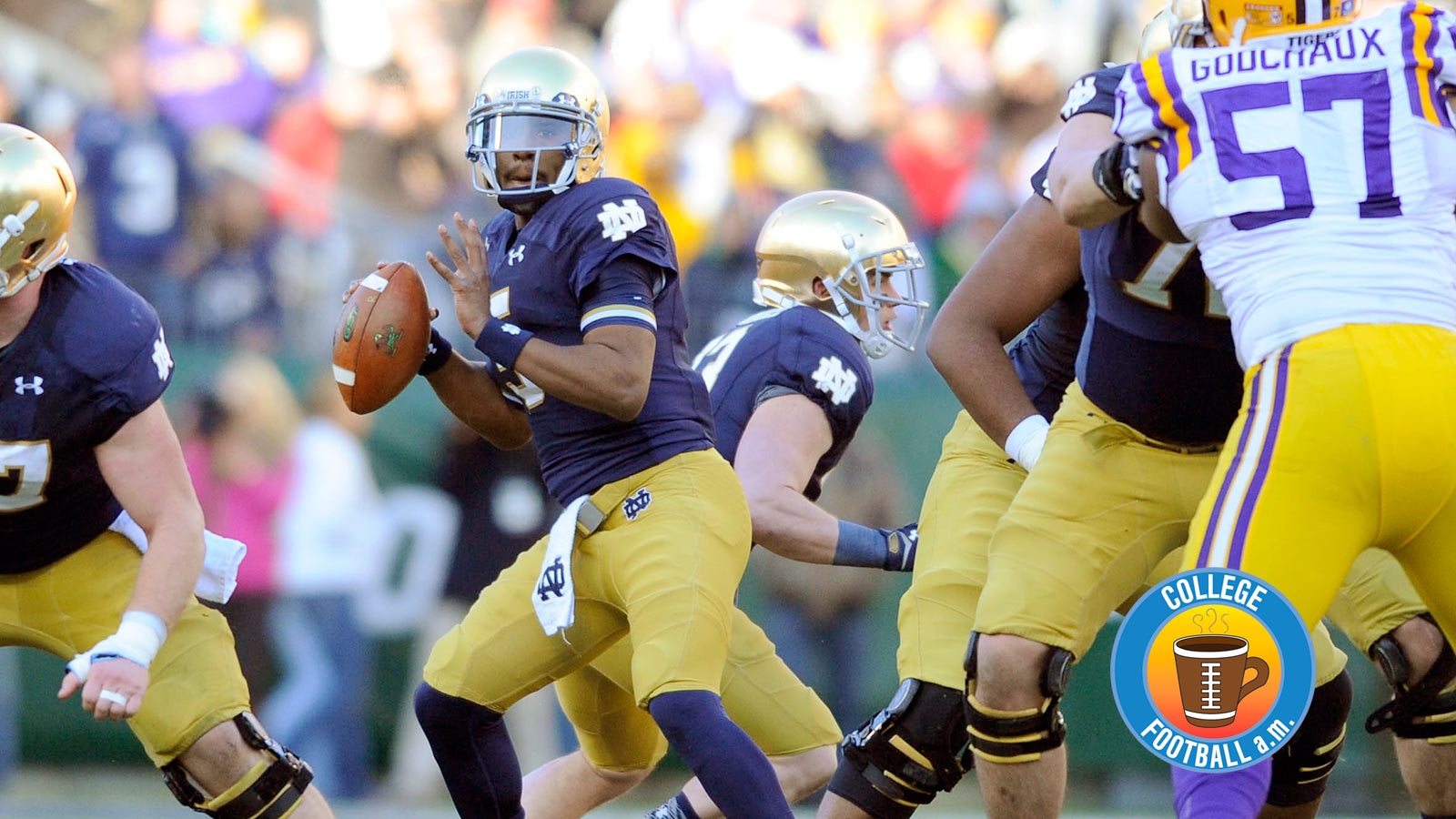 The offseason isn’t just a time for coaches to find new gigs, but players as well, and here’s an interesting idea: Could Notre Dame quarterback Everett Golson be leading the LSU Tigers in 2015?

Nola.com is reporting that Golson has reached out to the Tigers about the possibility after Notre Dame and LSU played in the Music City Bowl last week.

Couple things about this: It seems pretty clear Notre Dame coach Brian Kelly is ready to turn the QB job over to Malik Zaire after Golson completed 60 percent of his passes (50th nationally) and threw 14 picks in 2014. Golson has one year of eligibility left and wouldn’t be given the same benefit of the doubt as he did entering 2014, considering the last time he played for the Irish before that — after being suspended for the 2013 season — he was the QB on the 2012 team that went to the national championship. So it might make sense for Golson to seek opportunity elsewhere.

LSU is a possibility for Golson — who will graduate in May and will then be eligible to play immediately at another school — after an SEC rule change last year allowed its members to accept graduate transfers. One wrinkle for Golson: Because he was academically ineligible for the 2013 season, LSU would need to obtain a waiver from the SEC to complete the transfer, as Nola.com notes.

For the Tigers, their QB situation is unsettled heading into 2015 although there isn’t a lack of talent. Junior Anthony Jennings and sophomore Brandon Harris will compete for the job in the camp, with Harris expected to be the QB of the future in Baton Rouge. But bringing in Golson would add some competition to camp, at the very least, and at best give the Tigers a more viable option at QB in 2015. Jennings completed only 48.9 percent of his passes in 2014, and Harris completed 55.6 percent in 45 attempts.

The one thing any LSU QB will have is plenty of support. Rising sophomore running back Leonard Fournette is ready to be a breakout star in 2015, and junior WR Travin Dural and sophomore WR Malachi Dupre should become big-time threats. In an unsettled SEC West, maybe Golson — with another offseason of improvement — would give LSU the best chance at contending in 2015.

Everett, what do you think about going to LSU?

Don't believe everything you hear..

You mean everything on the internet ISN’T true?

1. Has Kliff Kingsbury finally found the guy who will bring defense to Texas Tech? Kingsbury hired former Houston defensive coordinator David Gibbs as the Red Raiders’ new DC, and Gibbs, who’s respected in the industry and was coveted by new Houston coach Tom Herman, will be tasked with improving a defense that ranked 106th in the country in yards per play allowed this season (6.24). Tech also hired Zac Spavital, who worked with Gibbs at Houston, as a defensive assistant.

"I am extremely excited to have Coach Gibbs and Coach Spavital join our staff," Kingsbury said in a statement. "What they were able to accomplish in their short time at the University of Houston is incredible. Coach Gibbs developed UH into a top-20 defense that led the country in turnovers over a two-year span. With stops in both college football and the NFL, Coach Gibbs will bring experience and ingenuity to our defensive unit."

2. Couple other coaching moves: Oklahoma coach Bob Stoops has reportedly fired his other co-offensive coordinator, Josh Heupel, after firing Jay Norvell earlier this week. Cal assistant head coach Rob Likens will be the new OC on David Beaty’s staff at Kansas, a source tells Bruce Feldman. Kentucky signed one of its best recruiters to a three-year extension after Jim Harbaugh came calling with a job offer from Michigan. Manny Diaz, the former Texas DC who was once presumed to be Mack Brown’s successor before the Longhorns’ defense collapsed, has landed Mississippi State’s DC gig after a year at Louisiana Tech. Vanderbilt coach Derek Mason hired former Wisconsin assistant Andy Ludwig as his new OC and has decided to take on the defensive responsibilities himself in 2015.

3. Did you know Oregon’s Mark Helfrich is the lowest-paid coach in the Pac-12 at $2 million per year, just behind Cal’s Sonny Dykes, once all deferred payments are accounted for? That shocked me, and I suspect – win or lose next week – that should change very soon. Bruce Feldman has a good piece on Helfrich, the best bargain in college football.

1. Missouri’s Shane Ray, the SEC defensive player of the year in 2014, will hold a press conference today and is expected to declare for the NFL Draft. Meanwhile, superb Washington linebacker Shaq Thompson is turning pro.

2. Oregon and Ohio State revealed the uniforms the will wear in the national title game. Gotta say: was hoping for something a bit more exotic from the Ducks.

What they'll be wearing: National Championship uniforms for Oregon and Ohio State pic.twitter.com/ypapS6Zoo6

3. The current line for the Oregon-Ohio State is Ducks minus-7, and Bovada is seeing 70 percent of the early action from the public come in on Oregon while the sharps are leaning Ohio State. Bovada sports book manager Kevin Bradley tells FOX Sports they believe this is the public overreacting a bit to the way Oregon beat FSU in the Rose Bowl and are resisting bumping the line up to 7.5 because the sharp money indicates they’re right on at seven, or even a touch too high.

1. What will be the biggest difference between Ohio State and Florida State? The Buckeyes won’t quit, says an Oregon player. Oh.

2. Marcus Mariota’s explanation for his modest touchdown celebration is cool:

Mariota was asked about his TD celebration. Said he taps his heart three times, once each for his mom, his dad and his brother. #GoDucks

3. Ty Duffy has five teams who could be overhyped going into 2015 after impressive bowl performances. I respectfully disagree with TCU, which will return a bunch of key starters from a dominant 12-1 team. A top-five preseason ranking for TCU would seem to be properly hyped.

* Six Alabama stories to follow as the Tide transition to 2015, per Michael Casagrande.

Have a great Tuesday, everybody.