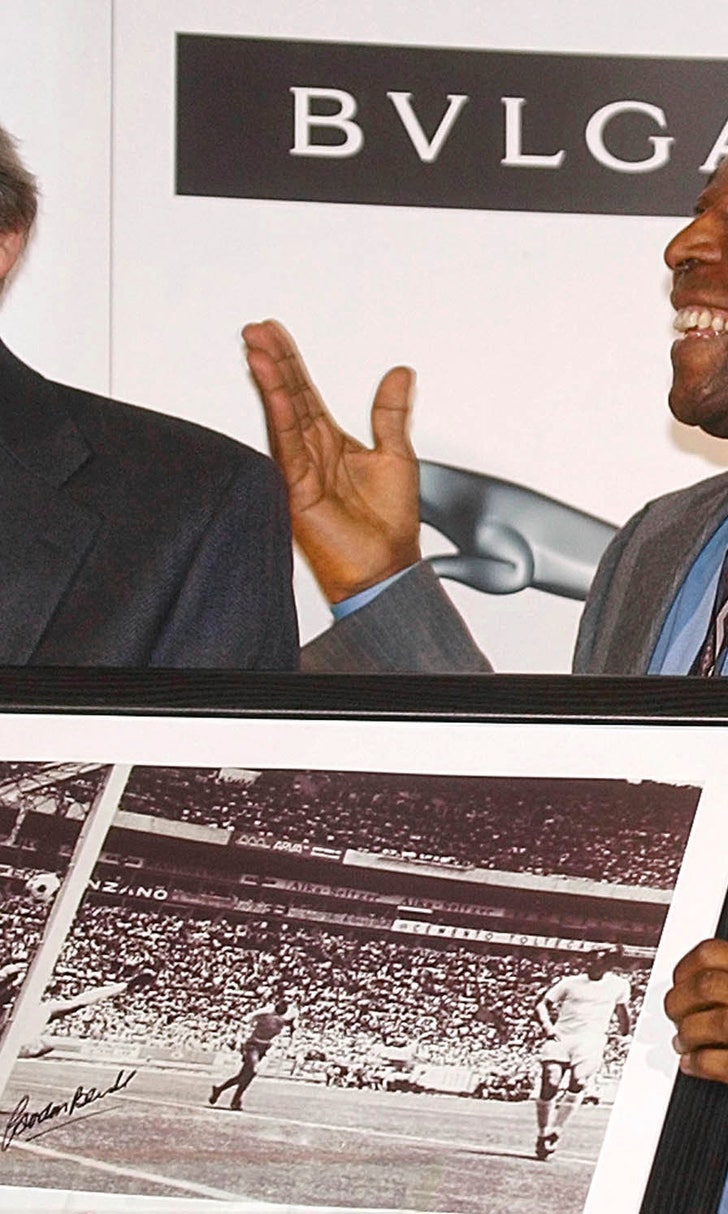 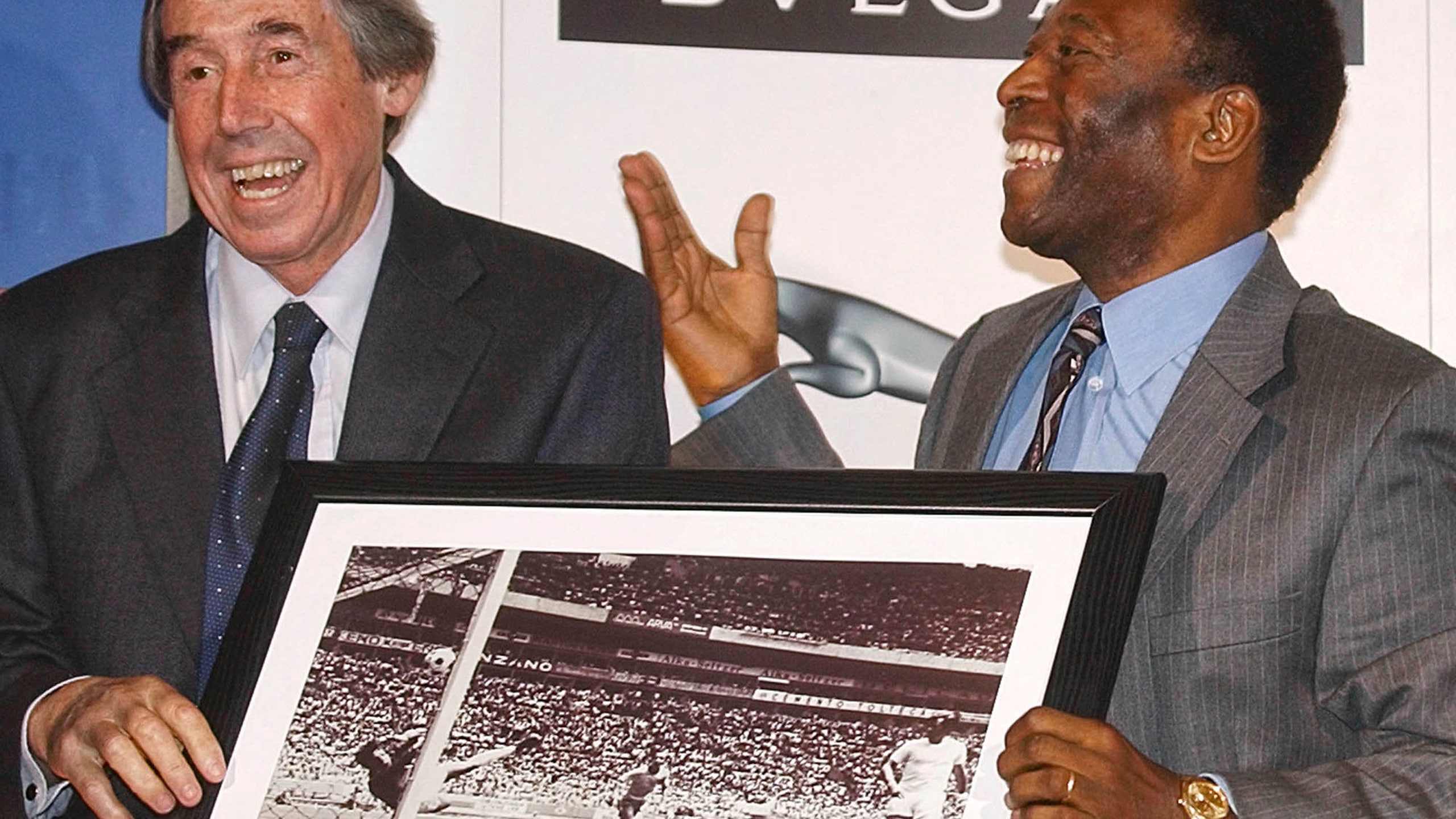 Aiming a header to bounce off the hard field, Pele was certain the ball would creep inside the England goalkeeper's right post and threw his arms into the air to celebrate what he thought was an opening goal for Brazil.

Banks, though, had already scurried across his line as the cross was coming into the penalty area, dived and with his outstretched right hand scooped the ball over the crossbar.

The supreme feat of athleticism and agility on soccer's biggest stage became widely acclaimed as the save of the century. When Banks died on Tuesday at age 81, this was the viral moment from an analogue age racking up millions of views across social media.

Banks already had cemented his status as one of English soccer's most revered players four years earlier in helping soccer's home nation win what remains its only World Cup title. He conceded only one goal in five games, on a penalty kick by Portugal's Eusebio, before England's 4-2 win over West Germany in the final at Wembley Stadium.

"They won't remember me for winning the World Cup," Banks said. "It will be for that save."

Pele himself once compared it to a "salmon leaping up a waterfall ," and says the save remains among the best he has ever seen.

"Banks appeared in my sight like a kind of blue phantom," Pele recalled Tuesday. "He came from nowhere and he did something I didn't feel was possible. He pushed my header, somehow, up and over. And I couldn't believe what I saw. Even now when I watch it l, I can't believe it. I can't believe how he moved so far, so fast."

Brazil won that 1970 group game 1-0 and then went on to its third World Cup title. Banks was beaten by the player who had provided that earlier cross for Pele — Jairzinho — but the save has gained more recognition than the goal in the annals of soccer history.

It was the result of Banks' attention to detail in training sessions in Mexico.

"I noticed that when the ball was dropping in front of me, it was kicking up, not staying low like it did in England," Banks recalled in January 2018 at a Football Writers' Association tribute dinner to Pele. "I stopped back to do some extra shooting training to help me get used to it, and that helped me make the save."

It still required quite a bit of improvisation as well.

"I knew that I had to come off the line to narrow the angle, then once Pele had punched it with his head down to my right-hand side, I knew I had to get over there very quickly," Banks said. "The ball was going in and as I dived I had to anticipate how high it was going to come up from the hard surface.

"As I reached across, I got it right, the ball hit the top of my hand and went off."

At that moment Pele was already wheeling away in celebration.

"As I hit the floor I saw that the ball had missed the goal," Banks said in a 2017 interview with the BBC. "At first I thought, 'You lucky so-and-so,' but then I realized it has been a bit special."

It forged a special bond between one of the greatest strikers and goalkeepers. When a statute of Banks was unveiled outside Stoke City's stadium in 2008, Pele attended the ceremony.

"I am glad he saved my header because that act was the start of a friendship between us that I will always treasure," Pele said. "Whenever we met, it was always like we had never been apart."

Banks' death was announced in a short statement from his family on the website of Stoke, the English club he was playing for in 1970. No cause of death was given.

"It is with great sadness that we announce that Gordon passed away peacefully overnight," the Banks family said. "We are devastated to lose him but we have so many happy memories and could not have been more proud of him."

"Banksie," as he was known, was already in his 20s when he started his club career by making his debut for Chesterfield in 1958-59 before spells with Leicester (1959-67) and Stoke (1967-73) in England's top division. He won the League Cup with Leicester and Stoke.

He is the fourth member of England's lineup from the 1966 World Cup final to die, following captain Bobby Moore, Alan Ball and Ray Wilson.

"Gordon was a fantastic goalkeeper and I was proud to call him a teammate," former England teammate Bobby Charlton said on Manchester United's Twitter account. "He will be deeply missed."

England coach Gareth Southgate remembered Banks as "an all-time great for England," and the team posted video of the 1970 World Cup save on its Twitter account.

Banks' final moment on the international stage came at the Kremlin in Moscow in December 2017 when he helped to draw the teams for last summer's World Cup.

FIFA also paid tribute to Banks on Tuesday by tweeting the clip from 1970. World Cup-winning Italian goalkeeper Gianluigi Buffon said: "I am one of the many who built their dreams on your perfect save."

Banks made 73 appearances for England. He thought his career had ended in 1972, at the age of 35, after he lost the sight in his right eye in a car accident.

But he was able to enjoy one final spell playing in the United States for the Fort Lauderdale Strikers of the North American Soccer League in 1977 and 1978.

"I can't believe how well I played with one eye," Banks told the Daily Mail in 2016. "It shows what can be done if you try."

One of Banks' kidneys was removed in 2005 because of cancer. He underwent treatment again a decade later when the disease was discovered on the other kidney.

"If I could make a save like the one against Pele, while playing against the greatest in the world, then I will be able to battle through this health problem," Banks said then.

Banks is survived by his wife, Ursula, and three children.