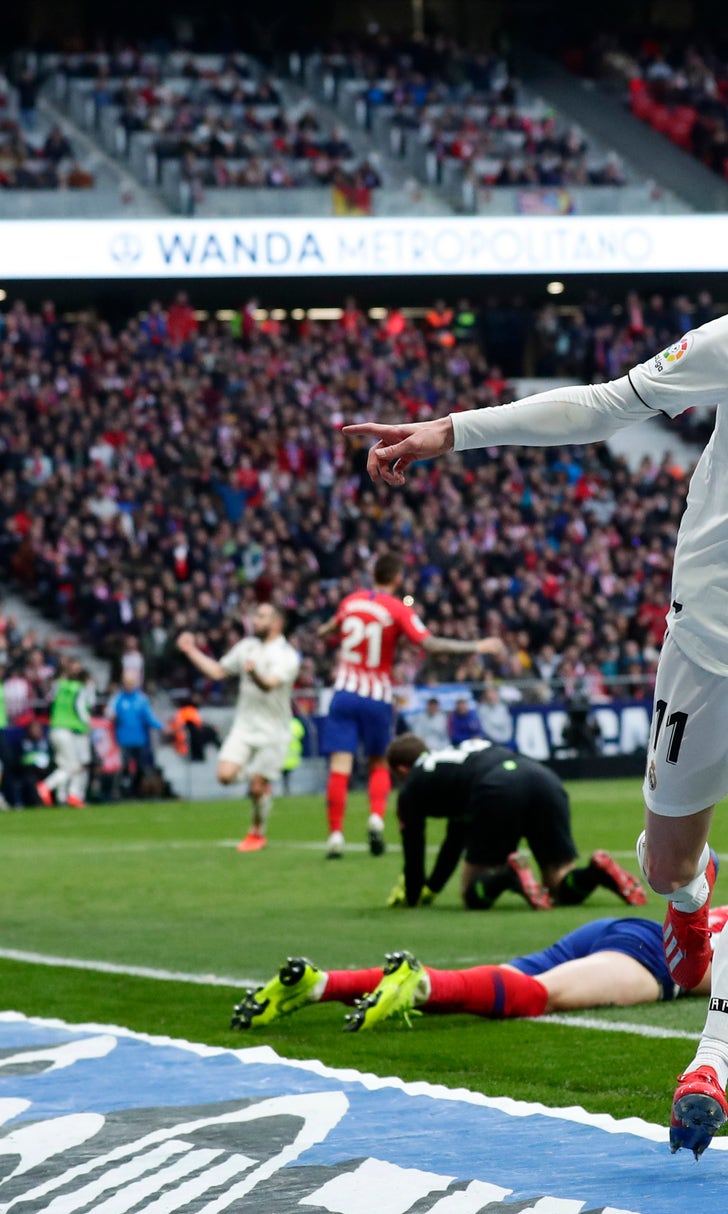 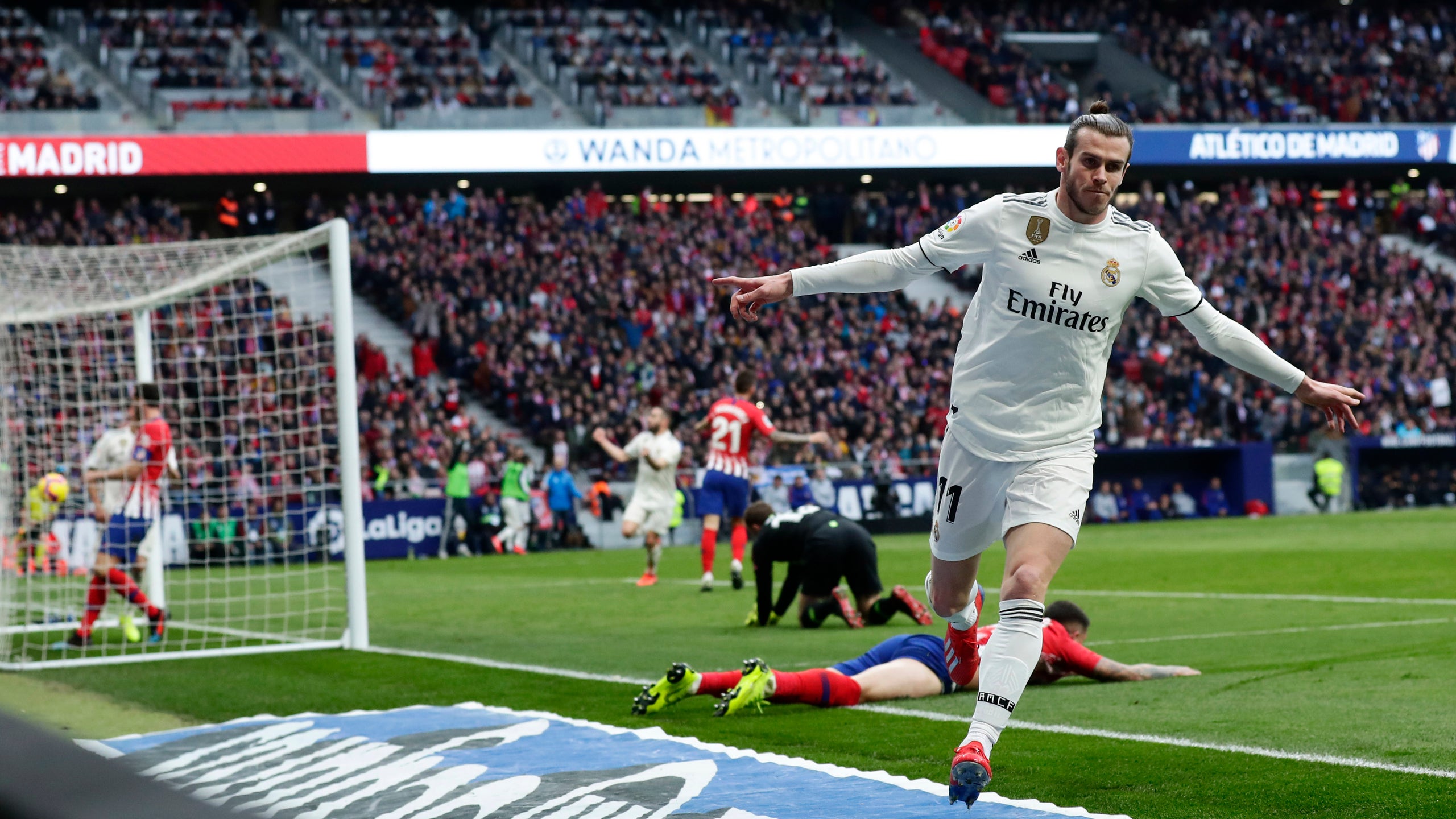 Three-time defending champion Real Madrid appears to have hit its stride again just in time for the return of the Champions League.

The knockout stages begin Tuesday with Manchester United hosting Paris Saint-Germain and Porto going to Roma in the first leg of the round of 16 games.

Madrid, confident after six wins and one draw from its last seven games across all competitions, visits Ajax on Wednesday, when the Spanish side will hope to record its seventh successive win over the Dutch club.

Madrid's hopes of claiming a record-extending fourth straight Champions League title appeared fanciful earlier this season after a run of five losses in seven matches across all competitions, culminating in the 5-1 defeat at Barcelona that left the side ninth in the Spanish league and saw Julen Lopetegui dismissed as coach.

Lopetegui's successor, Santiago Solari, endured a difficult start but he finally appears to have turned the side around with a run of good results.

Saturday's 3-1 win at Atletico Madrid moved Solari's team into second place in the Spanish league, just a few days after Madrid took a 1-1 draw at Barcelona in the first leg of their Copa del Rey semifinal.

Solari, a member of Madrid's 2002 Champions League-winning team, has got Croatia midfielder Luka Modric back to his best after his lackluster start to the season. The 2018 Ballon d'Or winner was a pivotal figure in the win over Atletico.

While Madrid has been improving, Ajax has been going in the other direction. Its defense has struggled since the Eredivisie resumed after its winter break, conceding four in a draw with Heerenveen and crumbling even further in a 6-2 defeat at rival Feyenoord.

Ajax bounced back with a 6-0 win over VVV Venlo but slumped to a 1-0 defeat at Heracles Almelo on Saturday.

Ajax midfielder Frenkie de Jong will get a taste of things to come against Madrid after agreeing to transfer to Barcelona next season in a deal that could cost 86 million euros ($99 million). De Jong was substituted late in the second half Saturday, but did not appear to be seriously injured.

When Jose Mourinho was fired in December, it looked like Manchester United could need to win the Champions League as the only way to qualify for the tournament next season.

But Ole Gunnar Solskjaer has reignited United's top-four challenge since being appointed manager until the end of the season.

Lifting the European Cup, just as Solskjaer did as a player with United in 1999, would make it hard for the club not to hand the job to the Norwegian on a permanent basis.

United was 11 points off fourth place when Mourinho was fired, but the side has only dropped two points since then, and beat Fulham 3-0 on Saturday.

PSG coach Thomas Tuchel has a major dilemma with star forwards Neymar and Edinson Cavani both out injured. Tuchel has to decide whether to pair French league top-scorer Kylian Mbappe with the ineffective Eric-Maxim Choupo-Moting — who has scored only one goal in 12 league matches and was poor in Saturday's 1-0 win over Bordeaux — in a 4-4-2 against United. Tuchel could push Julian Draxler further up in a 4-5-1, with Draxler effectively operating as a playmaker behind Mbappe.

Draxler could also find himself in a central midfield role if Marco Verratti is unable to play against United. Verratti only just returned from a sprained ankle and played about an hour of the game against Bordeaux.

If Verratti doesn't play, Tuchel is likely to put central defender Marquinhos as one of his two holding midfielders along with either Draxler or the newly signed Leandro Paredes.

The trip to Rome should hold no fear for Porto after an impressive campaign so far. Group D winner Porto is undefeated in the Champions League since losing to Liverpool in the first leg of last season's round of 16, while it hasn't lost in the Portuguese league since a 1-0 defeat at Benfica in October.

Porto has won its last five Champions League matches to match a club record and claimed 16 points — more than any other team — in the group phase.

Roma had a seven-game winning European run at the Stadio Olimpico until it was ended by a 2-0 defeat to Madrid in Group G.

Dortmund's Champions League ambitions could be undermined by its propensity to concede late goals in games most sides would consider wrapped up and won.

Dortmund squandered a 3-0 lead to draw 3-3 with Hoffenheim in the Bundesliga on Saturday, allowing its league lead to shrink to five points. Lucien Favre's side travels to London having failed to win any of its last three games, and it has injury worries over captain Marco Reus.

Reus, Dortmund's best player this season with 13 goals and nine assists in 19 league games, has a muscular injury picked up in the German Cup exit to Werder Bremen last week.

Tottenham is definitely without top striker Harry Kane due to ligament damage in his left ankle and midfielder Dele Alli due to a hamstring problem.

But at least the side has Christian Eriksen, who created the opener before scoring himself as Tottenham warmed up for Dortmund's visit with a 3-1 win over Leicester on Sunday.

Though it was third-placed Tottenham's fourth successive Premier League win, coach Mauricio Pochettino was unhappy his stretched squad had to play a day after Dortmund.

The game will be played at Wembley as Tottenham's new stadium at White Hart Lane is delayed.