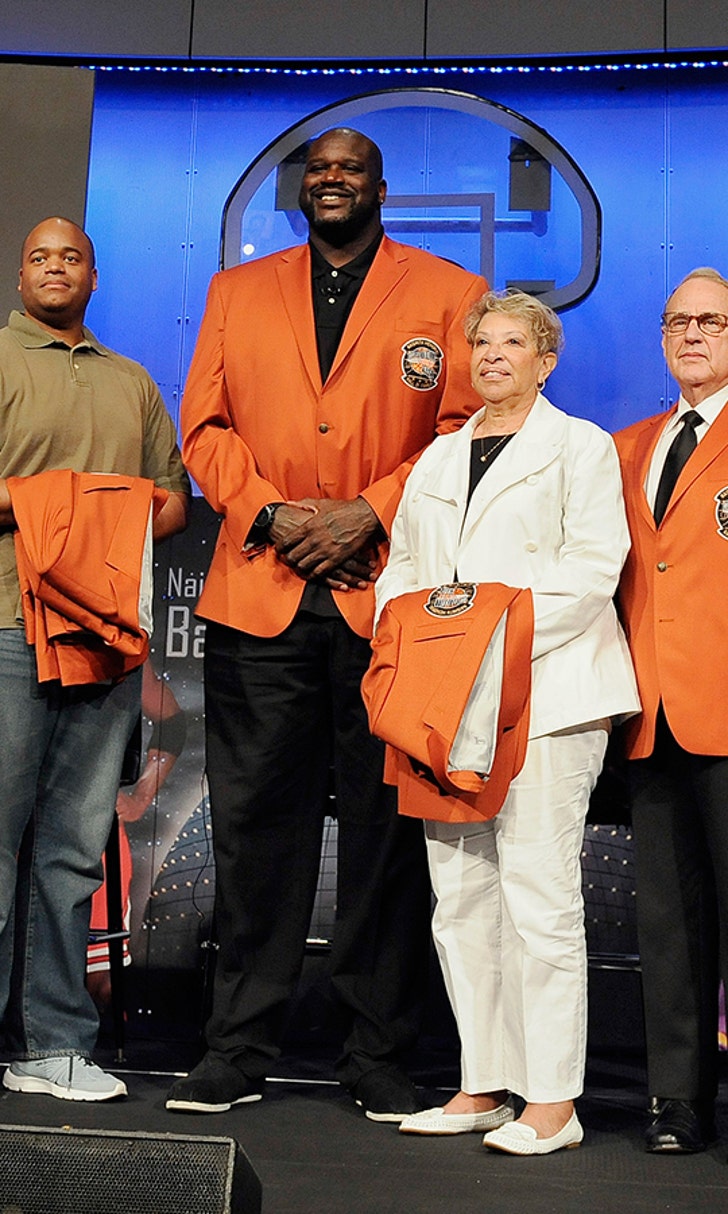 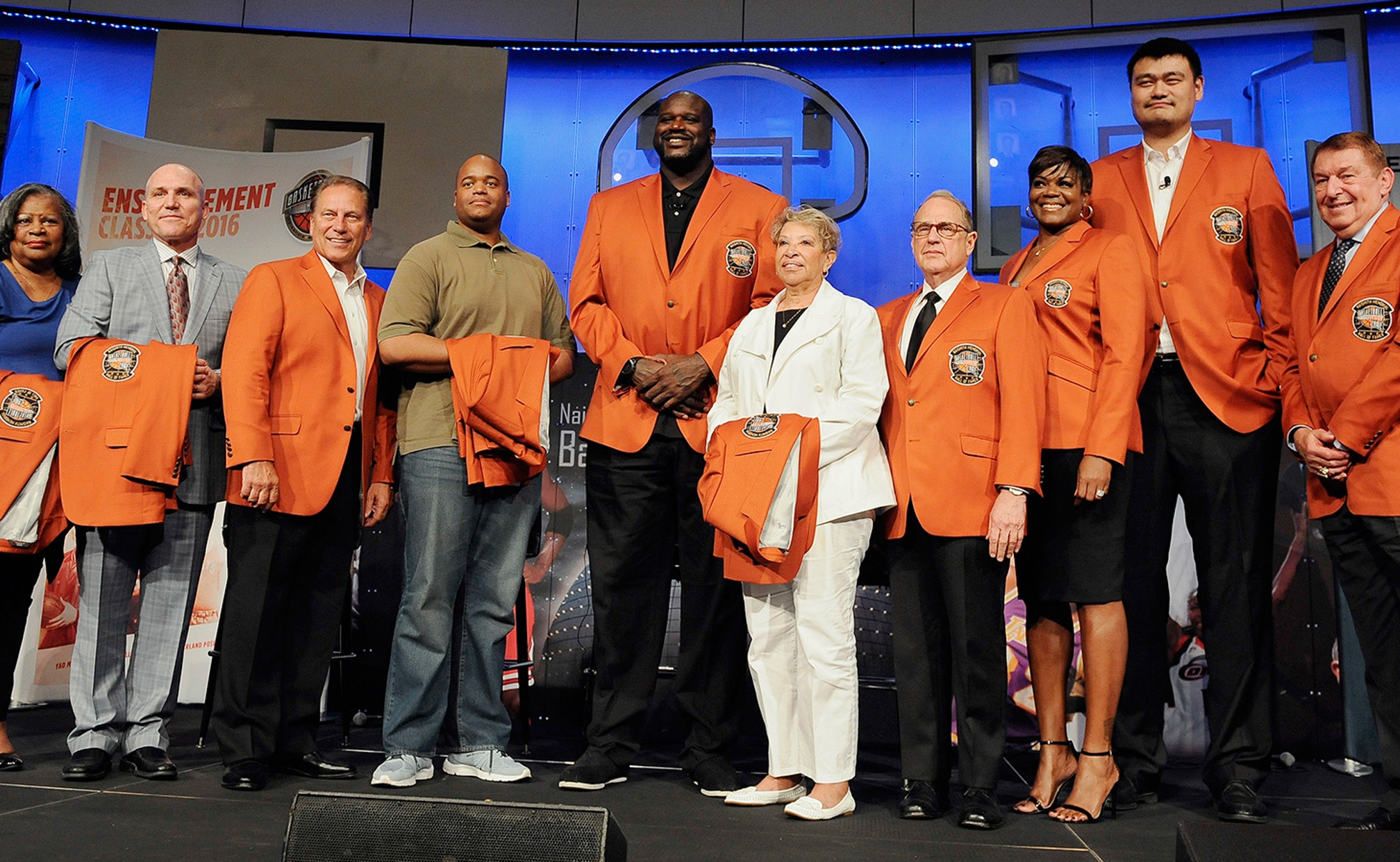 Shaq savoring every moment of his Hall of Fame experience 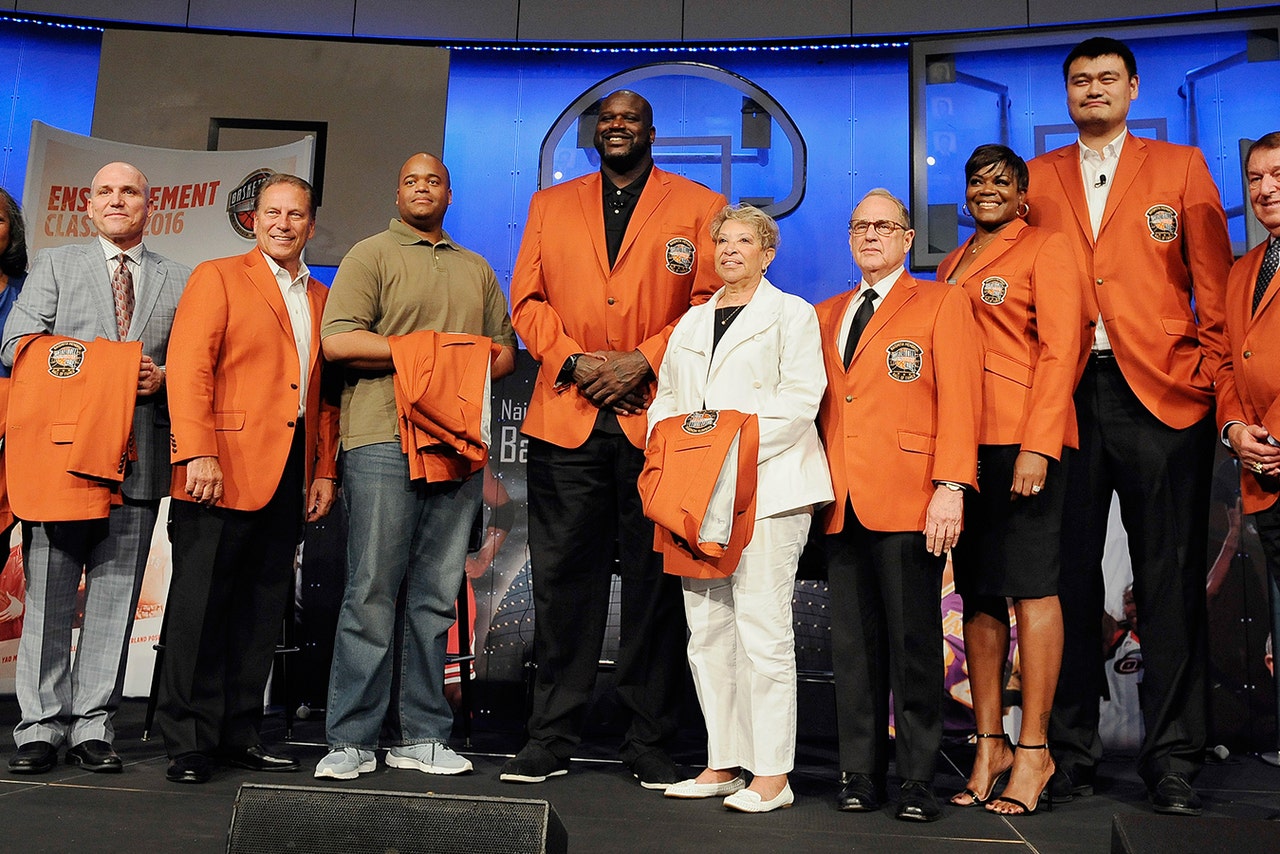 SPRINGFIELD, Mass. (AP) -- The Naismith Memorial Basketball Hall of Fame will soon welcome two of the sport's game-changing stars -- one big and one small.

Hall of Fame chairman Jerry Colangelo, a 2004 inductee, said it might be one of the top five classes he has seen.

"I think it's an extraordinary class," Colangelo told The Associated Press. "It's true that each year we think it's a great class. But some years some of them do stand out."

O'Neal, a four-time NBA champion and seventh on the all-time scoring list, was always must-watch television for what the 7-footer did both on and off the court. He again drew all eyes to him during Thursday's jacket ceremony for the inductees.

After he slipped on his custom orange blazer, Shaq theatrically waved off Hall of Fame president and CEO John Doleva, clearing the way for the man who once called himself "The Big Aristotle" to strut solo across the stage as camera bulbs flashed.

Then, when he was seated on the dais, Shaq sprung to his feet and relieved Doleva, who was struggling to reach the massive shoulders of the 7-foot-6 Ming. Shaq grabbed the jacket and gleefully assumed the role of impromptu butler for his fellow big man.

His antics started much earlier. Swoopes told a story of Shaq promising her $1 million if she would fake a fall during the class' walk to the stage. She declined, but only because she said Shaq wouldn't "show me the money."

Later, Shaq explained that his bravado was only his attempt to savor every moment of the experience. He said his speech Friday will be a love letter to those who helped him achieve a basketball dream that didn't seem real when he was a teenage army brat.

"I don't memorize a lot of stuff, but I have this one memorized," O'Neal said of his speech. "I wouldn't miss it for the world. I bought about 1,000 tickets to each event. All my family, everybody will be there. It's just great."

He said being in the same class with a guy like Iverson was appropriate for two players who brought their own unique styles to the NBA -- Shaq as an imposing force in the middle and Iverson as a small player whose skill and personal bravado still resonate today.

"He had a lot of heart," O'Neal said of Iverson. "We're similar in the aspect that we did it our way. ... I was only going to do it my way. He did it his way. Cultural icon. A lot of things were implemented because of his style -- with the dress code -- and the way he wears chains and big tattoos and all that stuff. He made it cool for that to happen."

Iverson missed Thursday's jacket ceremony, arriving late to speak with the assembled media. He got emotional when he was asked about the people who he credited for his success and highlighted John Thompson, his college coach at Georgetown, as well as Larry Brown, his longtime NBA coach with the Philadelphia 76ers.

Shaq said Iverson's crossover of Michael Jordan during his rookie season in 1997 was the definition of the kind of player Iverson was.

"Everybody talks about his move against Michael Jordan," Shaq said. "You got to have (guts) to pull off a move against a legend like that."

Yao ushered in a new era of international basketball when he left China to become the top pick of the NBA draft in 2002. As a member of the Houston Rockets, he earned All-Rookie honors and would go on to be an eight-time All-Star. He was named a three-time FIBA Asian Championship MVP.

"When I'm walking through the Hall, for the first time I feel I'm so small," Yao said. "I look up to the roof top and all the pictures around ... I really sense all the people before me that Mr. Naismith made possible with the life he had."