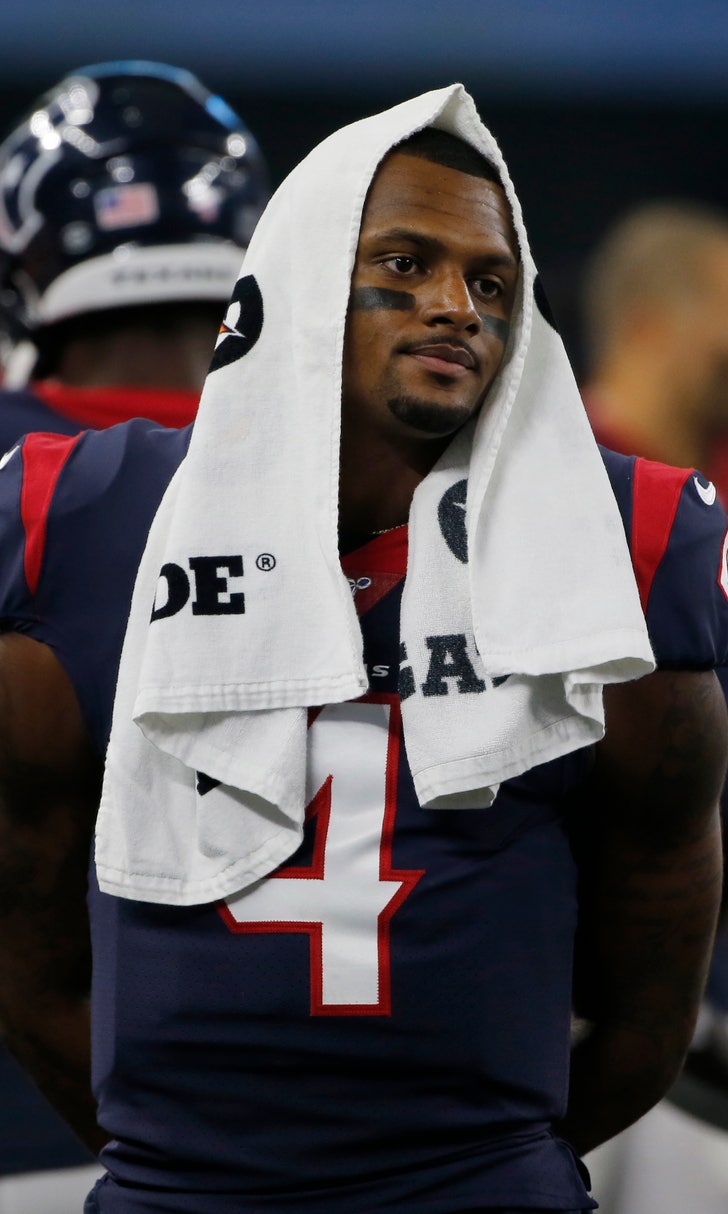 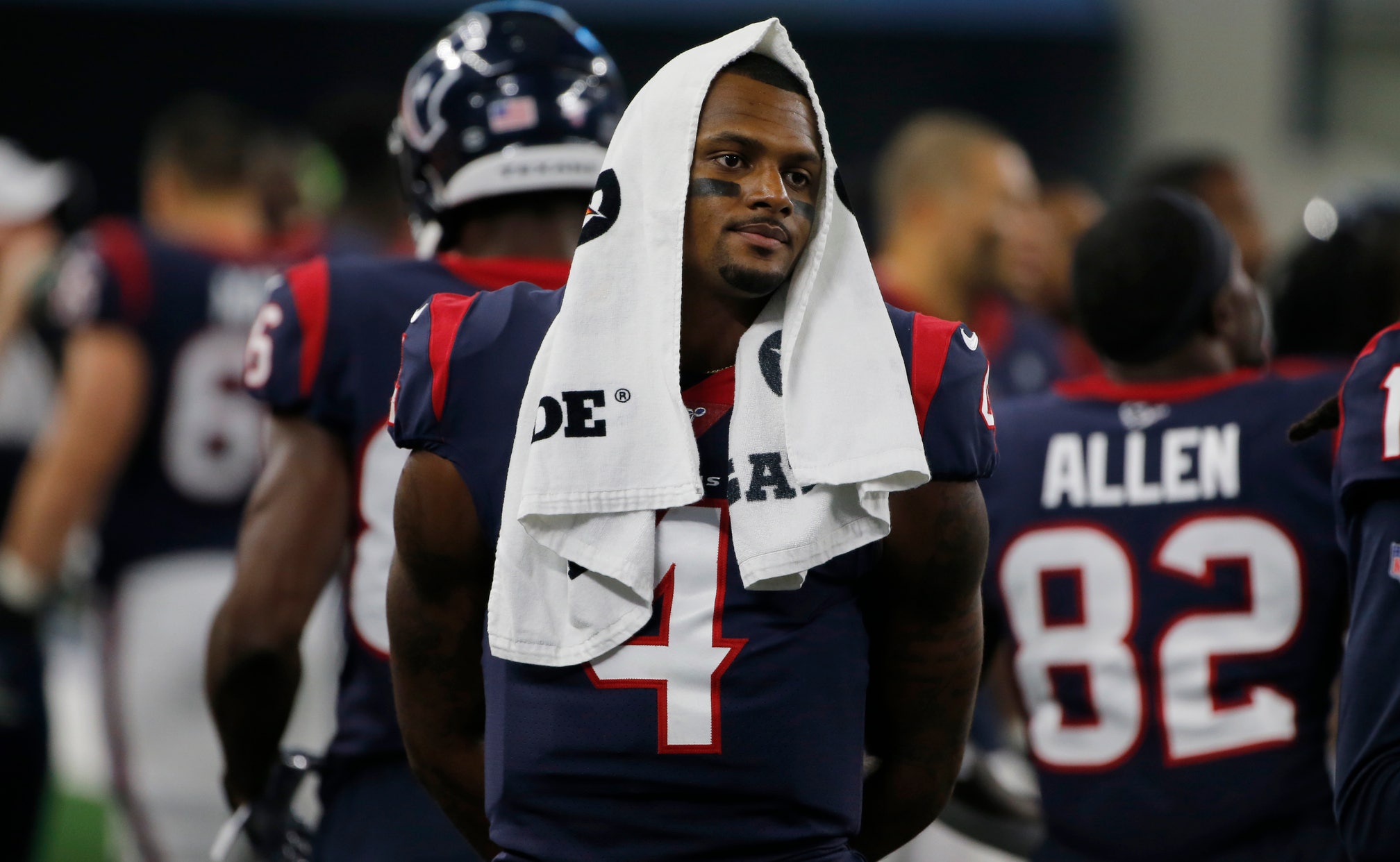 Texans' Watson out quickly, Miller hurt in loss to Cowboys

The Houston Texans couldn't get their quarterback off the field fast enough, especially after running back Lamar Miller sustained what coach Bill O'Brien called a serious knee injury on the second play.

Watson didn't return for a second series after getting dropped twice in three plays. The first play wasn't a sack because of defensive holding, the second was and resulted in a fumble , the first of four Houston turnovers in a 34-0 exhibition loss to the Cowboys on Saturday night.

Miller was carted off after defensive tackle Maliek Collins slammed into his left leg at the line of scrimmage in what figures to be Miller's only carry of the preseason. The eighth-year back didn't play in the first two exhibitions.

"It's very tough," Watson said. "You have a guy that's so special to our team. Anybody that gets hurt, it's tough. But he's one of the guys that has a lot of energy and a lot of power for this team. It's tough to see him go off in the cart."

Dak Prescott scrambled and threw a 12-yard touchdown pass to Michael Gallup while playing the first two series for Dallas. Prescott was 2 of 5 for 22 yards, the three incompletions his first of the preseason.

"I'm just excited for where we're going to go," Prescott said. "This team is coming together, this team is strong, this team is excited. A lot of youth, a lot of energy."

Tony Pollard, the starting running back with Ezekiel Elliott holding out, stayed an extra series, when the rookie had a 20-yard run to finish with 26 yards on six carries. Alfred Morris, the primary replacement during Elliott's six-game suspension two years ago, had a 1-yard TD run.

Pollard nearly reached the end zone by running 24 yards on a screen, but it was negated by an illegal block penalty on Jason Witten. The tight end, poised to set the Dallas record with a 16th season, was playing at home for the first time since coming out of retirement after a year in broadcasting.

Taco Charlton had both the hits on Watson, causing and recovering a fumble on the sack that counted to set up Gallup's touchdown. Charlton got a second sack against Joe Webb III and forced another fumble. Kerry Hyder also had two of the Cowboys' eight sacks.

Charlton, a 2017 first-round pick, went to training camp with his roster spot in jeopardy, but has been particularly strong in the past two preseason games.

"He's just gotten better and better and better right before your eyes and my eyes as well," owner Jerry Jones said. "He's really getting rewarded and I'm proud of him because he's had to really work to get to this point."

The night got worse for Houston's offensive line when versatile starter Zach Fulton was carted off in the first half. Last year's right guard has also played center and left guard in previous seasons.

Joe Thomas blocked a punt for Dallas, kicked the ball toward the goal line while trying to pick it up and ultimately recovered it in the end zone for a 14-0 lead. He almost had an interception return for a touchdown on a pass from Webb that went through his outstretched hands.

IT'LL HAVE TO DO

Watson was hoping for more than the single series he got in last week's 30-23 win over Detroit. His only other appearance was productive, though. Watson was 5 of 7 for 60 yards with a 4-yard touchdown to DeAndre Hopkins. Since he couldn't get a pass off in two dropbacks against the Cowboys, those will be his preseason numbers. The opener is Sept. 9 at New Orleans.

"Even if we went out and the starters played a half and put up 34 points, I still don't believe that we'd be ready," Watson said. "There's always ways to get better all the way to kickoff of the Saints game."

Dallas kicker Brett Maher had his best night in what's been a shaky preseason. Last year's surprise replacement for Dan Bailey made field goals of 36 and 23 yards and all four extra points.

If Miller is out for an extended period, the focus will turn to Duke Johnson, acquired from Cleveland in a trade this month. Johnson hasn't played for the Texans yet. The other two backs who got carries against the Cowboys are undrafted rookies: Karan Higdon Jr. (13 carries for 28 yards) and Damarea Crockett (three for 27).