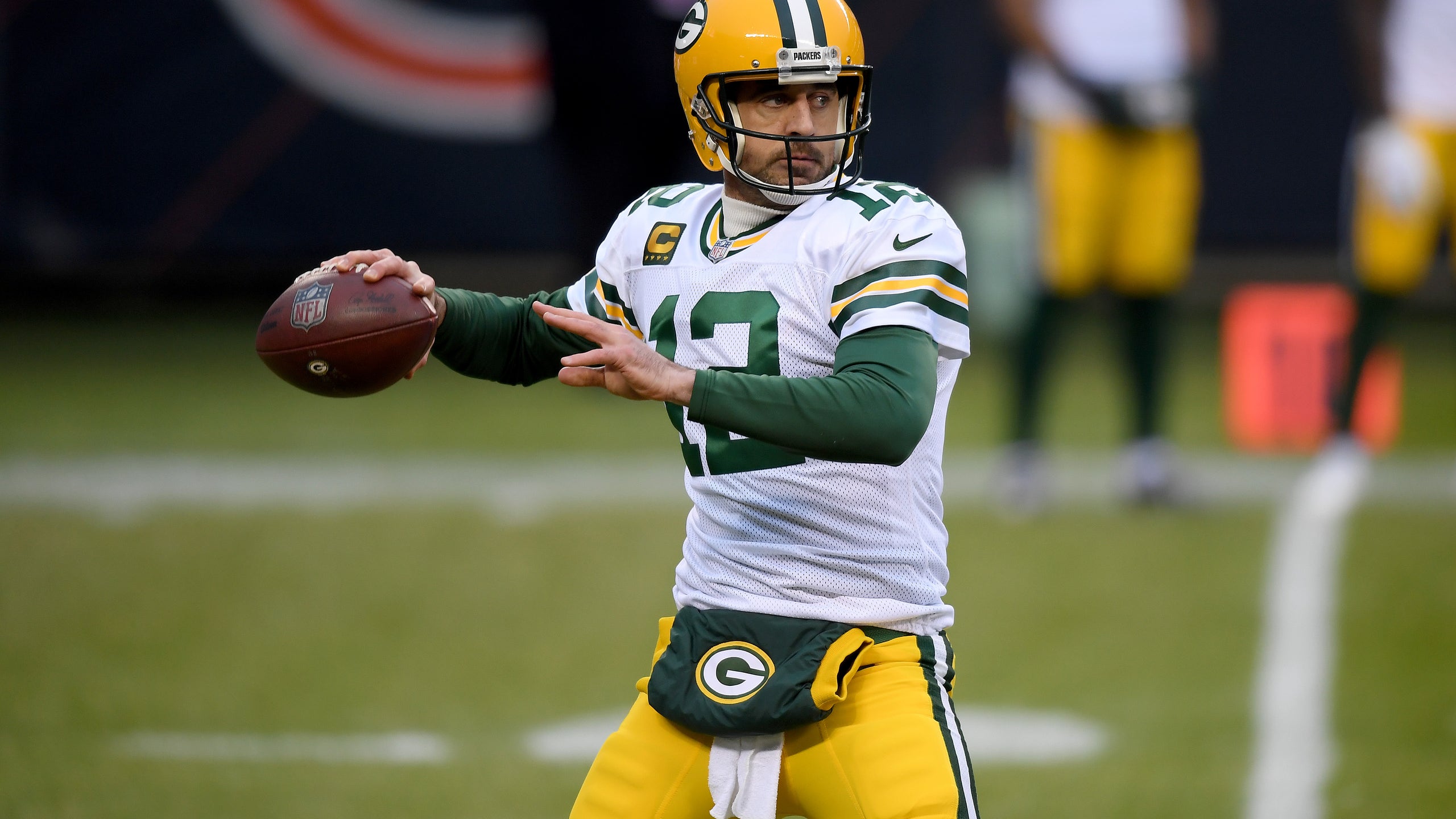 After the second window of games in Week 17, the AFC playoff picture is set.

Meanwhile, Sunday night's result will determine the final qualifier in the NFC playoffs.

Here are the major takeaways from Sunday afternoon in the NFL.

The Packers went to Chicago and handled business.

Now, they will get to take a break from handling business during Wild Card weekend.

With a 35-16 win over Chicago, Green Bay clinched the top-seed in the NFC, and will have home-field advantage throughout the NFC playoffs, in addition to a first round bye.

It was the Aaron Rodgers show once again, as the Packers quarterback and probable MVP frontrunner completed 19 of 24 passes for 240 yards, and added in four touchdowns for good measure.

Green Bay qualified for the playoffs for the second straight season and for the ninth time in Rodgers' 13 years as starter.

The last time the Packers finished atop the NFC was back in 2011, when Green Bay finished the season 15-1 but fell to the New York Giants in the divisional round.

Despite the loss, the Bears still qualified for the postseason as the No. 7 seed due to Arizona's defeat at the hands of the Los Angeles Rams.

Chicago will travel to take on New Orleans next week.

Los Angeles was without its starting quarterback in the most important game of the season.

So, its defense got the job done instead.

The Rams, minus Jared Goff, only scored 18 points, but were able to hold the Arizona Cardinals to just seven points on the day, officially booking their spot in the NFC playoffs as the No. 6 seed.

Goff's replacement John Wolford completed 22 of 38 passes on the day, and threw one interception, but it was enough to overcome the Cardinals, who watched franchise QB Kyler Murray finish the day 8-for-11 for 87 yards, after suffering an injury on Arizona's first drive of the game.

On their second drive, the Cardinals took a 7-0 lead behind an 11-yard TD pass from backup Chris Streveler to Jonathan Ward, but that would be Arizona's last score of the game.

Matt Gay would convert on three field goals for the Rams, and an 84-yard interception return from Troy Hill would prove to be the only touchdown scored for Los Angeles on the day.

LA will travel to face 3-seed Seattle next weekend.

Houston didn't make it easy, pushing Tennessee to its limits on Sunday afternoon, but a last-second, 37-yard field goal from Sam Sloman gave the Titans a 41-38 win and an AFC South title.

The story of the day, as is usually the case in Titans games, was all-world running back Derrick Henry, who rushed for 250 yards and two scores on 34 carries.

For the second consecutive season, Henry won the NFL rushing title, and for the first time in his career, he eclipsed the 2,000-yard rushing mark in a season, ending the year with 2,027 yards on the ground and 17 touchdowns, also a league-high.

The win gave Tennessee its first AFC South title since 2008, and the Titans will enter the playoffs as the No. 4 seed in the AFC.

Tennessee will play host to No. 5 Baltimore on Wild Card weekend. The Titans defeated the Ravens in overtime in Baltimore back in Week 11, 30-24.

It looked touchy for a moment in the fourth quarter, with Indianapolis nursing a narrow 20-14 lead over Jacksonville, but Jonathan Taylor refused to let the Colts lose.

Taylor ran all over Jacksonville to the tune of 253 yards – a career-high for the rookie – and two touchdowns on 30 carries, guiding Indy to a 28-14 win.

It marked just the third 100-yard rushing performance for Taylor on the season, and pushed him over the 1,000-yard mark for his rookie season.

Colts quarterback Philip Rivers finished the day 17-for-27 passing for 164 yards, one touchdown and one interception.

As the 7-seed in the AFC, the Colts will hit the road to face the No. 2 seed, the Buffalo Bills, on Wild Card weekend.

New Orleans took the drama out of its Week 17 matchup with division foe Carolina, taking a 26-7 lead over the Panthers heading into the fourth quarter and emerging with a 33-7 road win to close out the regular season and earn the 2-seed in the NFC playoffs.

The Saints rode the arm of Drew Brees to victory, as the future Hall of Famer finished the day 22-of-32 passing for 201 yards and three touchdowns.

It turns out the loss of superstar running back Alvin Kamara, who was placed on the COVID-19/reserve list this week, didn't doom the Saints' chances at securing a much-needed win.

Backup running back Ty Montgomery rushed for 105 yards on 18 carries, and backup QB Taysom Hill rushed for 41 yards and a TD on seven carries.

Five interceptions also helped the Saints' cause on Sunday, as they picked off Teddy Bridgewater twice and P.J. Walker three times.

The Saints will face 7-seed Chicago to open the playoffs. New Orleans defeated the Bears in overtime, 26-23, back in Week 8 in Chicago.

Russell Wilson put a cap on an up-and-down season with a 26-23 Week 17 win over San Francisco, securing the 3-seed for the Seahawks in the process.

Wilson finished the afternoon 20-of-36 passing for 181 yards and two touchdowns, finding receiver Tyler Lockett for both scores.

Seattle won four straight and six of seven to finish the regular season, capturing the NFC West crown for the first time since 2016.

The two teams split the season series, with each team winning on their home turf.

The Chiefs had already locked up the No. 1 seed and the AFC's only first round bye, so coach Andy Reid opted to sit quarterback Patrick Mahomes, wide receiver Tyreek Hill, safety Tyrann Mathieu, and several other key starters in Week 14.

With that, Justin Herbert led the Los Angeles Chargers to a 38-21 win – their fourth consecutive victory – adding another dominant performance to cap his rookie season in the process.

Herbert aired it out for 302 yards and three touchdowns, while adding a score on the ground to bolster his record-breaking rookie resume.

Herbert's future in the City of Angels looks bright.

With both teams already eliminated from playoff contention, Las Vegas pulled off a last-second 32-31 victory over Denver to finish the season at .500.

The Raiders overcame four turnovers in the second half, including three in a five-play stretch, and LV quarterback Derrick Carr tossed two interceptions and added a fumble.

Still, Carr would finish with 371 passing yards and two touchdowns.

The Broncos had a shot at victory, but with nine seconds left, Brandon McManus’ 63-yard field goal try was blocked by Maxx Crosby, for his second FG block of the day.

Despite the loss, Denver won't come away empty-handed, as the franchise secured a top 10 pick in the 2021 NFL Draft.

Pressure Point
With the NFC's Super Bowl berth at stake, two top QBs are feeling the heat, but who is under the most pressure?
10 hours ago