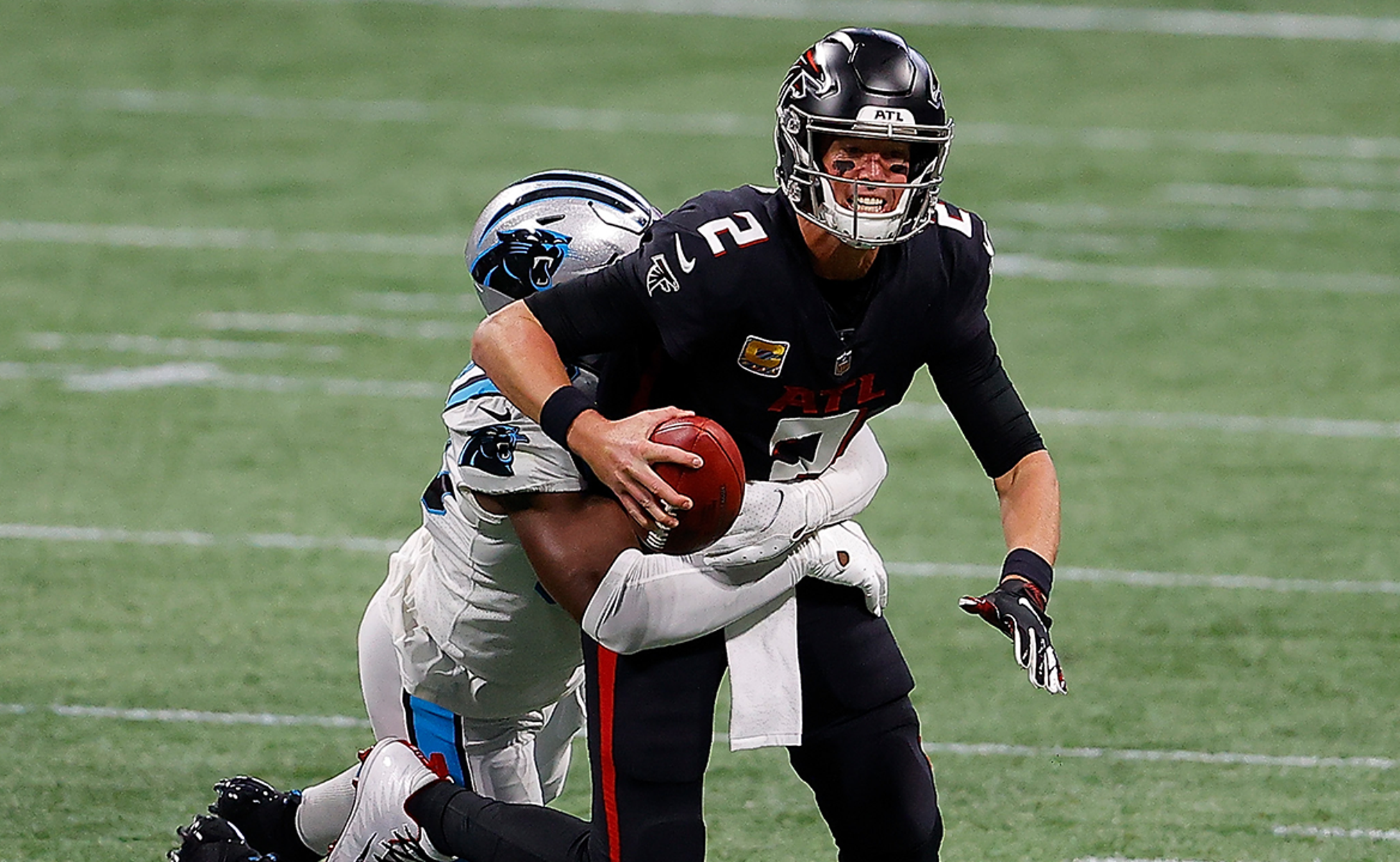 Editor's Note: This content is sponsored by FOX Bet, which was developed by a division of Flutter Entertainment in partnership with FOX Sports, a unit of FOX Corporation. FOX Bet is solely responsible for this content and the products and services it provides.

On the surface, the Carolina Panthers and Atlanta Falcons are teams heading in opposite directions.

With new coach Matt Rhule on the sidelines, the Panthers are 3-4 but have played close in just about every game this season. On the flip side, Atlanta is 1-6, fired head coach Dan Quinn earlier this season, and has lost three games via epic fourth-quarter collapses.

And yet, when the two meet at Bank of America Stadium in Charlotte for Thursday Night Football on FOX (kickoff at 8:20 p.m. ET), they will be more evenly matched than the records would show. And being able to predict the big happenings in this game could help you win $25,000 in FOX’s Super 6 contest.

Combined passing yards for Matt Ryan and Teddy Bridgewater in the first half?

Ryan is still one of the best passers in the game, and he posted 338 passing yards in Sunday’s loss to Detroit. In other words, there’s still a lot of receiver talent around the Falcons quarterback.

Bridgewater and the Panthers offense is a little more balanced, as he threw for 254 yards and two TDs on Sunday in a 27-24 loss at New Orleans. One number to keep in mind: the Falcons defense is allowing 8.7 yards per pass attempt right now – the worst in the NFL coming into Thursday night.

The Panthers allow 6.3 yards per pass attempt, a league-best.

How will the first touchdown in the second half be scored?

When these two teams met up three weeks ago – a 23-16 victory for Carolina in Atlanta – there were no touchdowns scored in the second half, as the game turned into a field-goal contest in the final 30 minutes (four field goals).

If there’s one choice to keep in mind: the short-yardage situations for both will likely see very conservative approaches that involve the run game.

How many total sacks, interceptions and fumbles will there be in the game?

Back in Week 5, the teams combined for two turnovers and two sacks. Both squads are middle of the pack when it comes to sacks – Bridgewater has been sacked 13 times, while Ryan has been sacked 15. Ryan has only thrown three interceptions – tied for fifth-fewest in the NFL.

In other words, there’s not a lot of underlying trends on this one to play.

How many different players will score a touchdown in the game?

There are some different trends to keep in mind on this one. Atlanta doesn’t have a TD reception by a running back this year. Only two running backs – Todd Gurley and Brian Hill – have rushing scores.

Five different Panthers have receiving touchdowns, while four have rushing scores. And both Atlanta and Carolina have no return scores. So, the pool might be limited unless something changes.

How many total points will be scored in the game?

Carolina’s offense hasn’t been the same without Christian McCaffery, but that doesn’t mean it is limited. The Panthers are still able to stretch the field with D.J. Moore on the outside and could take advantage of a porous Atlanta defense.

Meanwhile, the Falcons lowest point total of the season was 16 points, which they scored against both Green Bay and Carolina. So a game that ends up in the high 40s would seem likely.

Choose a team to win and by how many points.

The Panthers – with an expanded playoff field – need this game to hang in the conversation for an NFC wild-card spot, with the NFC South and NFC West already looking like it will dominate the conversation for that position (the Bears/Packers runner-up would also likely have a claim as well).

After another crushing loss, and in the final game before the trade deadline in the NFL, it's fair to wonder how the Falcons – in a short week – respond on the road.