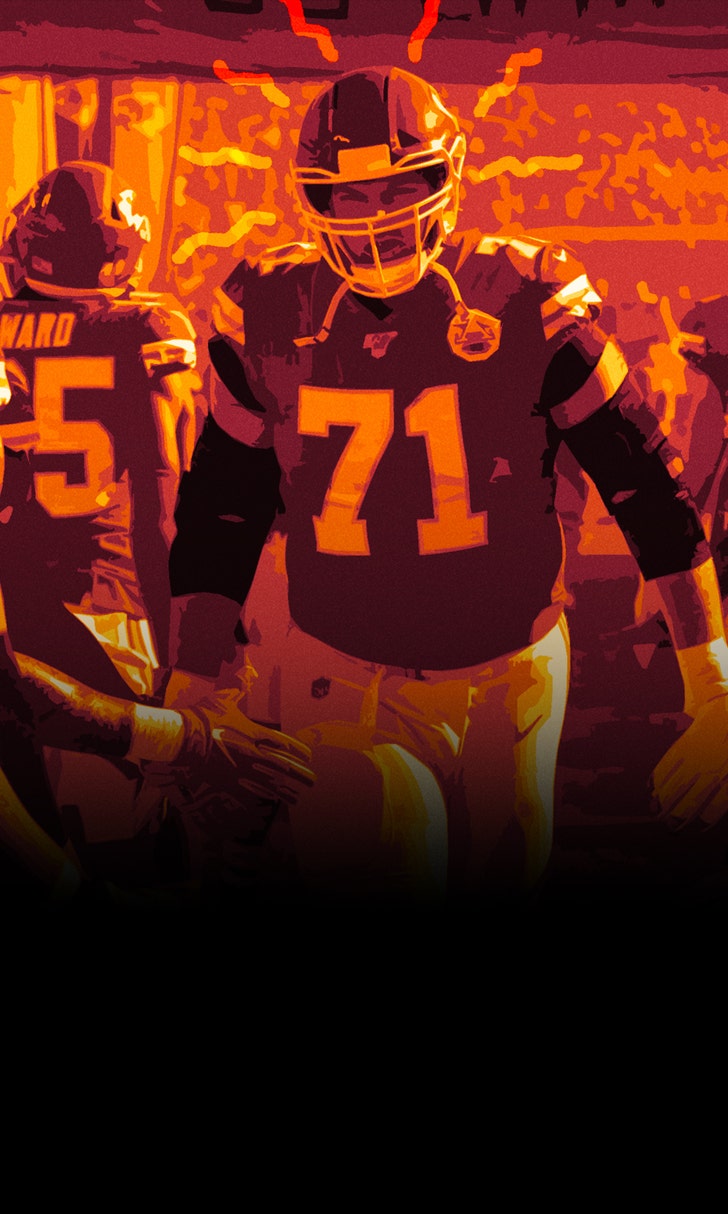 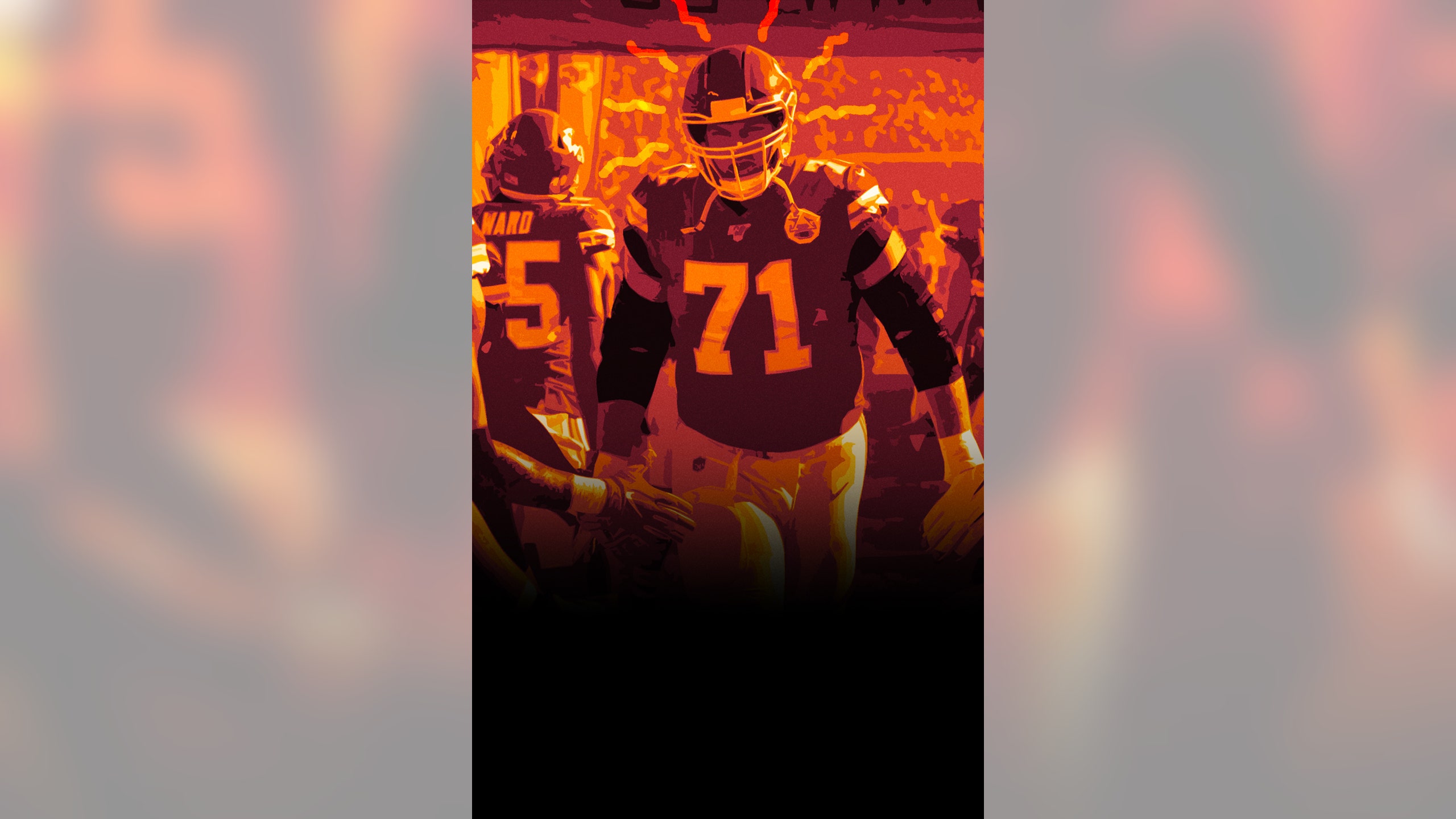 Mitch Schwartz, my brother, is forever a Super Bowl champion

I’m not the jealous type. I’m fortunate to have a kick-ass life.

That said, I do tend to get jealous in the minutes right after the NFL season ends, when the winning team is hoisting the Lombardi trophy as Super Bowl champions. And I’m not jealous just because they’ve won.

I’m jealous because I understand winning the Super Bowl is not only about the game – it’s also about legacy.

I played eight seasons in the NFL. I made the playoffs three times, not winning a single playoff game. In 2009, I was on the practice squad for the Carolina Panthers when the Arizona Cardinals came to town for a divisional matchup. We scored on the opening possession and then didn’t score again until the last 50 seconds of the game. In between, the Cardinals scored 33 unanswered points while our quarterback, Jake Delhomme, committed six turnovers.

In 2012, I played on a Minnesota Vikings team that visited Green Bay in the wild-card round. We had just beaten them in Week 17, but without our starting quarterback, we lost 27-3.

The following season, I started for the Kansas City Chiefs in an AFC wild-card game against the Indianapolis Colts. We were up 38-10 in the third quarter, and y’all know the rest. We lost 45-44, surrendering the second-biggest comeback in NFL playoff history.

That disappointment only gets stronger after you’re finished playing.

The reasons you play football change throughout your career. When you’re young, you’re playing for the love of the game. You play to win and to set your family up for life. Getting that second contract brings life-changing money, and if any player tells you they aren’t playing for it, they are lying.

As you get older, your focus turns almost solely to your legacy, and if you’re not a future Hall of Famer, legacy means being able to say you’re a Super Bowl champion for the rest of your life. There are countless examples of veteran players in the twilights of their careers choosing to play for Super Bowl-caliber teams.

The reason is clear: legacy.

Even as your career winds down and you get the itch to hoist that Lombardi Trophy, you still don’t truly understand what a Super Bowl can do for your life. You won’t get it until you retire without one and see your peers who are champs.

First, they will always be introduced as "Super Bowl champion."

This is why I was most excited to watch my brother, Mitch, who plays right tackle for the Chiefs, compete in Super Bowl LIV last season. For his legacy. As you can imagine, the week leading up to the game was hectic. I wasn’t nervous for him as much as I just felt anxious about the game. The San Francisco 49ers had an outstanding pass rush, and the Chiefs' offensive line was under the spotlight. All week, I had to discuss my brother blocking that defensive line as I previewed the game on radio row and beyond.

Once my media work was finished, I got time to relax with my wife and enjoy the Chiefs' team hotel. When Sunday finally rolled around, we got on the bus about four hours before game time.

It was a quick ride to Hard Rock Stadium. When we arrived, we wandered over to the Chiefs’ team tailgate. I managed to socialize, but my mind was on the game, and I couldn’t wait for the kickoff. After both teams had been introduced by Dwayne "The Rock" Johnson and the players were sprinting from their tunnels to the field, I was already getting goosebumps. 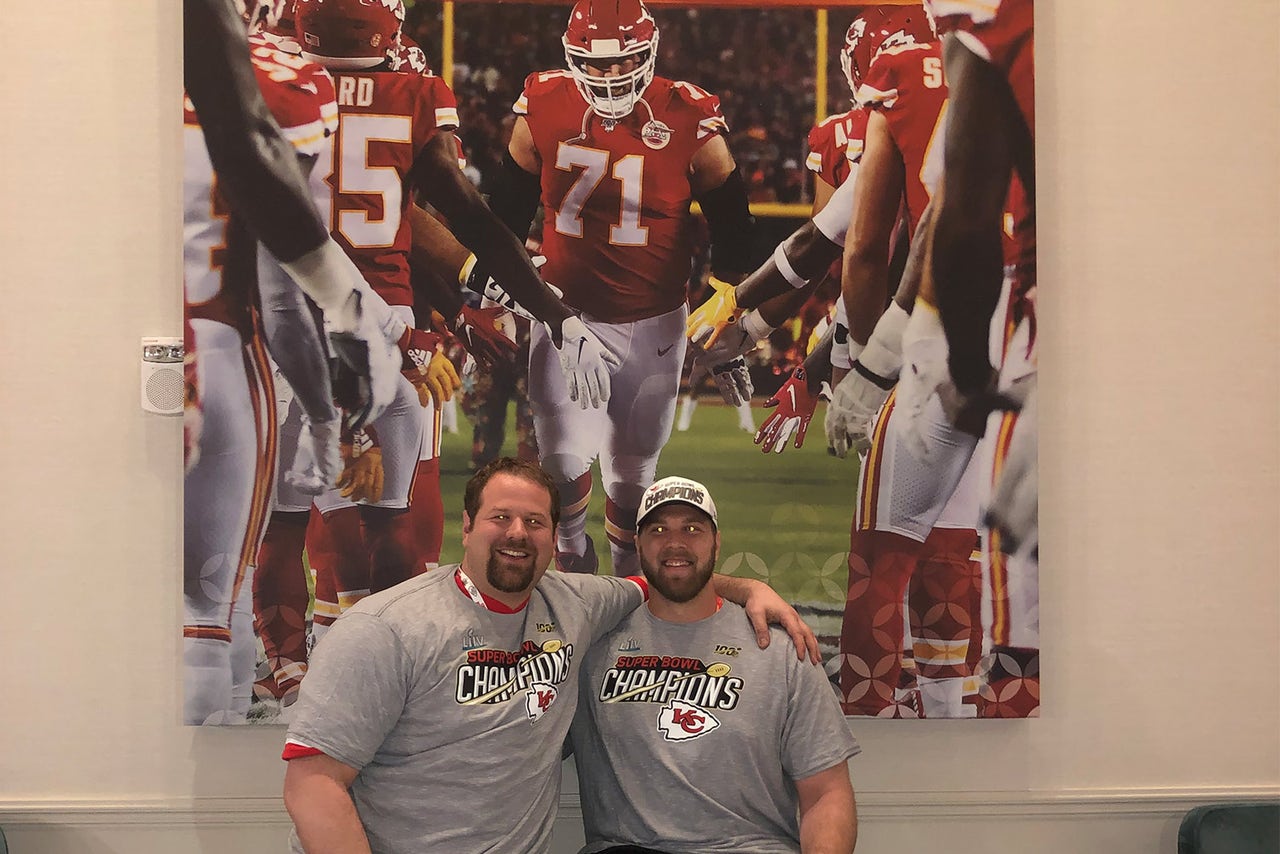 I was ready to suit up and play, and as the game began, I couldn’t imagine the adrenaline of the players on the field.

One thing about me: I do not like to watch football with anyone. I like to sit on my couch, with my television, my iPad and my Twitter account. I often turn the volume way down or mute the game. I want to be alone with my thoughts. So watching my brother play in Super Bowl LIV from the stands wasn’t the best for me, but what I absolutely loved was the energy of the Chiefs fans.

I’m a Mitch Schwartz fan first, Chiefs fan second. These Chiefs fans were die-hard. Most of them hadn't even been alive the last time the Chiefs won.

As you know, the game was up and down for the Chiefs and trending down with seven minutes left. I was resigned to the 49ers running out the clock to win the game. That’s what they do best — but it’s not at all what happened, as the Chiefs outscored the Niners 21-0 down the stretch to run away with the win.

As the game was winding down, my mind turned to my dad. He has always been the best fan to my brother and me, and we were determined to get him on the field to celebrate with Mitch. We rushed down to the area where family would be allowed to enter after the final whistle. But postgame field passes are limited, and my family didn’t have any. Luckily, my wife found a Chiefs employee, and he gave my dad an extra pass. It was so generous, and we are forever grateful.

My dad and Mitch got to share the memory of a lifetime. It was fabulous, and that amazing night was just beginning. 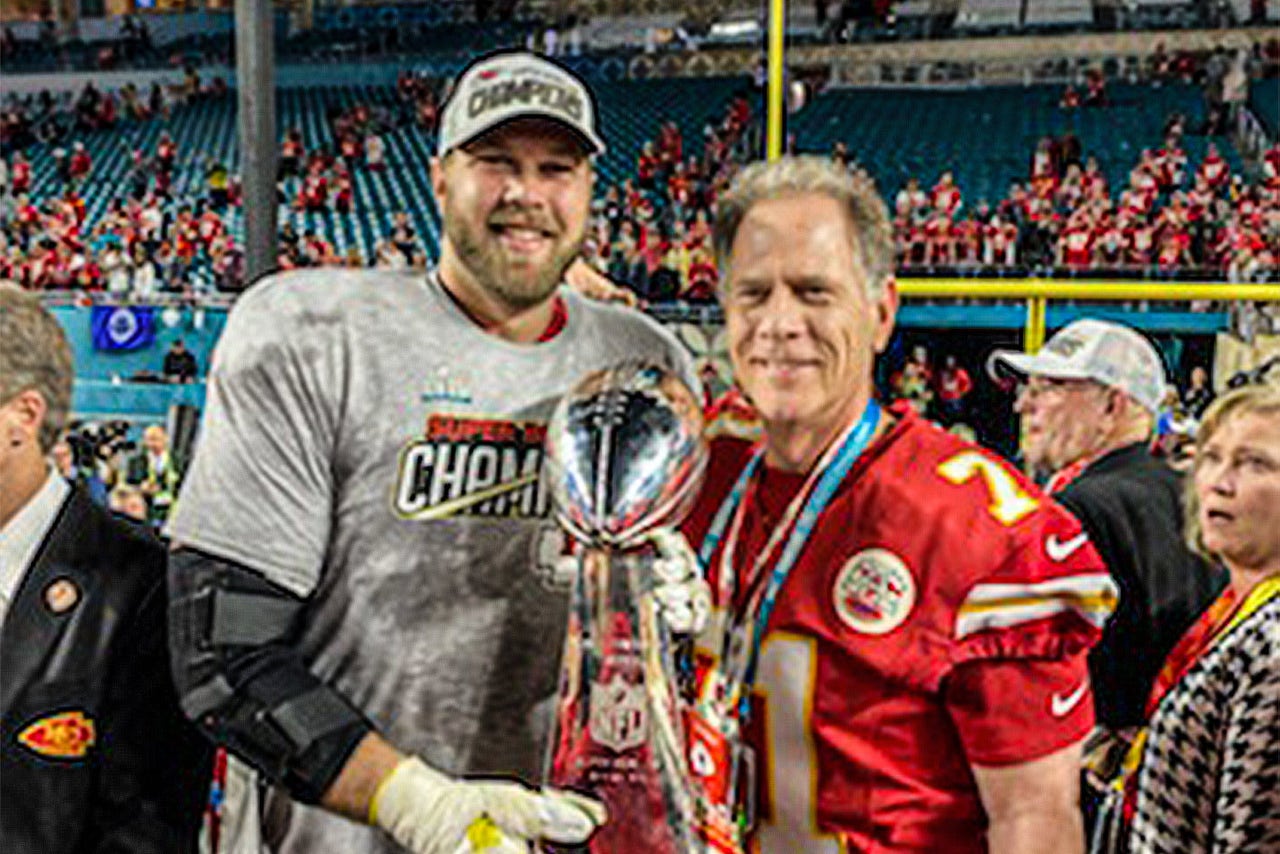 While Mitch and the Chiefs celebrated in the locker room, we bussed back to the team hotel. Man, it was wild. I’ve never seen anything quite like it. An entire hotel in celebration. Folks were drinking, cheering, dancing and living their best lives.

The after-party at the hotel was unforgettable. Around 1 a.m., maybe a tad sooner, Mitch texted me to let me know he’d arrived. We walked toward the giant ballroom, and I could hear Flo Rida performing inside. I met Mitch just outside the entrance and gave him a big hug. My brother is typically reserved — but not that night. I could see how proud he was.

Mitch and I talked about the game and geeked out about offensive line stuff no one else around us understood. We took some photos together, and then we all ducked back into the ballroom. He stayed for a bit before heading off to bed.

I don’t blame Mitch for leaving the party "early." I’m not a party person, either. Not in the slightest. I don’t drink. I love to sleep. You could even say I’m kinda boring. But oh, my – this after-party was incredible.

After Flo Rida’s set, we hit the buffet, tasting all the fancy catering and waiting for the next act to begin. We just didn’t want that night to end. At 2 a.m., the music restarted, and Pitbull hit the stage. He performed for almost two hours. Nonstop. The party was, as the kids say, lit.

We celebrated the Chiefs’ win until 4 a.m. and then went upstairs to our room and collapsed into bed. 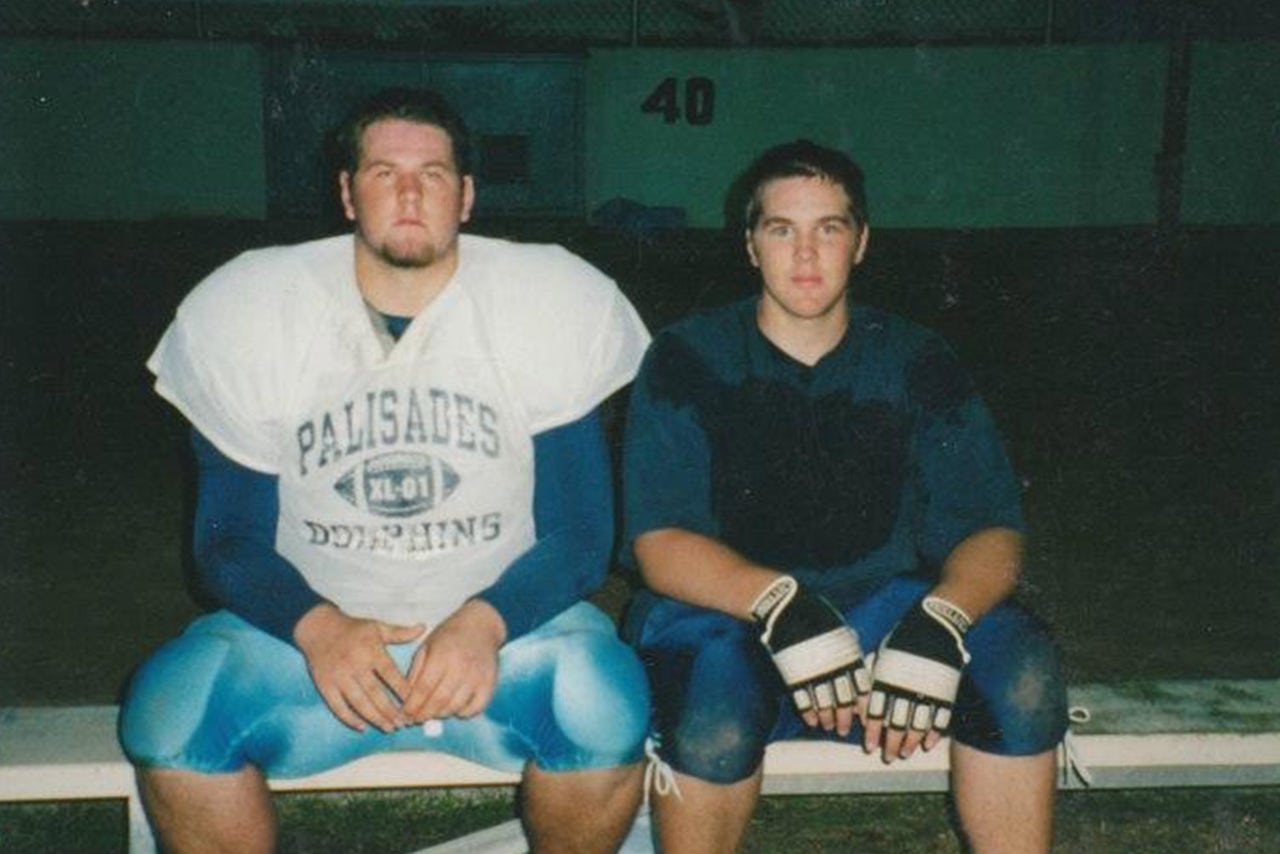 Thinking back on those moments from just over a year ago puts a huge smile on my face. Mitch and I never grew up dreaming of winning a Super Bowl. We didn’t even grow up wanting to play football. Heck, we had to trick Mitch into playing football once he got to high school by telling him that he could play quarterback.

But even though neither of us ever pictured ourselves winning the big game, we grew up always wanting the best for each other.

And that night, Mitch was the best.

Mitch was — and is — a Super Bowl champion.