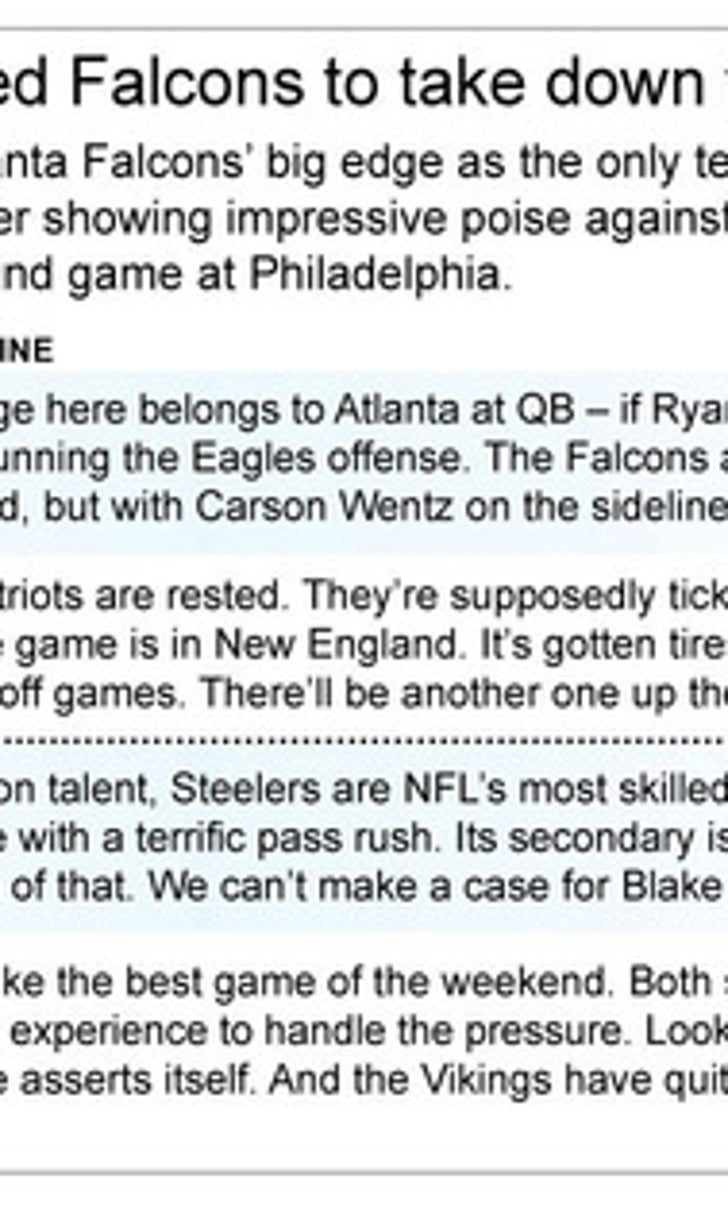 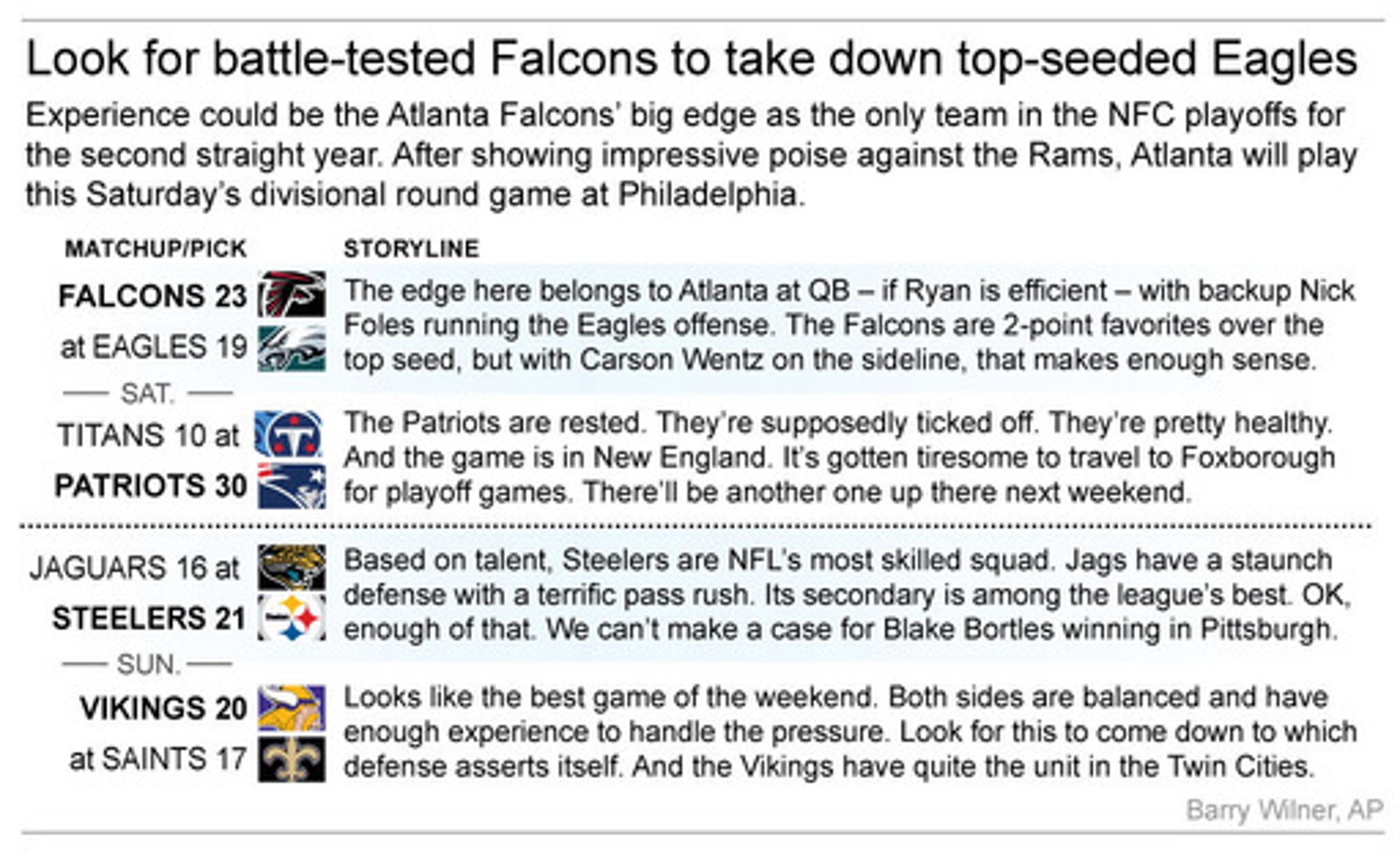 What America saw last weekend from the Atlanta Falcons was similar to what the team showed for 2+ quarters of last year's Super Bowl.

Can they keep it up as they head on the road again Saturday to Philadelphia?

The Falcons have that balanced offense - if Matt Ryan is efficient - to challenge any opponents. Where they made their mark against the Rams was on defense.

''We don't have a (complicated) defense, but we are very detailed,'' says defensive coordinator Marquand Manuel, a former NFL player who got the job last February. ''And the detail of expectations of understanding that they have to make our defense come to life, and they're doing an awesome job at it.''

Philadelphia's defense has been up and down recently, and it has dealt with a bunch of injuries. Depth has been a plus for Jim Schwartz's unit.

The edge here belongs to Atlanta at quarterback - if Ryan is efficient - with backup Nick Foles running the offense for the Eagles. It wouldn't be shocking to see Foles fly. Or struggle.

The Falcons are 2-point favorites over the top-seeded Eagles, a highly unusual occurrence. But one that, with Carson Wentz on the sideline, makes enough sense.

Tennessee (plus 13) at New England, Saturday

The Patriots are rested. They're supposedly ticked off. They're pretty healthy.

And they are miles better than the Titans.

Still, let's give Tennessee tremendous credit for how it rallied in Kansas City. The Titans showed resolve and an ability to come up with big plays on offense that few expected.

''You've got every team fighting to play for the next week,'' Patriots safety Devin McCourty says. ''Nobody's going to go out there - and I don't care if you're down, if you're up - like no one is going to quit. So, that's something I think we always talk about, and obviously you could see it in that game against Kansas City.''

But this one is in New England. Yes, it's gotten tiresome to travel (and travel, and travel) to Foxborough for playoff games. There'll be another one up there next weekend.

Jacksonville (plus 7+) at Pittsburgh, Sunday

One thing about the Steelers: They tend to play much closer games than they should. Based on talent alone, they probably are the NFL's most skilled squad.

Here comes Jacksonville, following an offensive stinker in beating outmanned Buffalo. Logic says this should be a rout.

Forget logic and remember that Ben Roethlisberger was so victimized in a 30-9 Week 5 loss to the Jaguars that he had one of the worst games of his career.

There's also the Antonio Brown factor: How healthy is the unanimous All-Pro receiver, who was injured in Week 15?

Jacksonville has a staunch defense with a terrific pass rush, too. Its secondary is among the league's best.

OK, enough of that. We can't make a case for Blake Bortles winning in Pittsburgh.

New Orleans (plus 4) at Minnesota, Sunday

What figures to be the best game of the divisional round, a redux of the Vikings' 29-19 home victory in the season opener.

Both sides are balanced and have enough experience to handle the pressure. While the Saints have the Hall of Fame-level skills of Drew Brees at quarterback, Minnesota's Case Keenum has been among the most pleasant surprises in the league.

Look for this one to come down to which defense asserts itself. Coach Mike Zimmer has built quite the unit in the Twin Cities.

''Well, you want to have pass rushers, you want to have guys that can cover,'' he says. ''Without giving away all my secrets, I like a certain body type with guys. You can kind of look at most of them and tell what we're trying to get. Athleticism, guys who can think quickly on their feet, safeties that have versatility, corners who can cover.''

Don't Count Out The Cowboys
Fans have a chance to win $1 million this week. And Jason McIntyre believes Dallas has a chance to prove the doubters wrong.
19 hours ago

The GOATS, the bad and the Jets
Charlotte Wilder recaps a wild NFL Sunday, including a battle of QB legends, a bevy of QB struggles and one hapless, winless team.
2 days ago