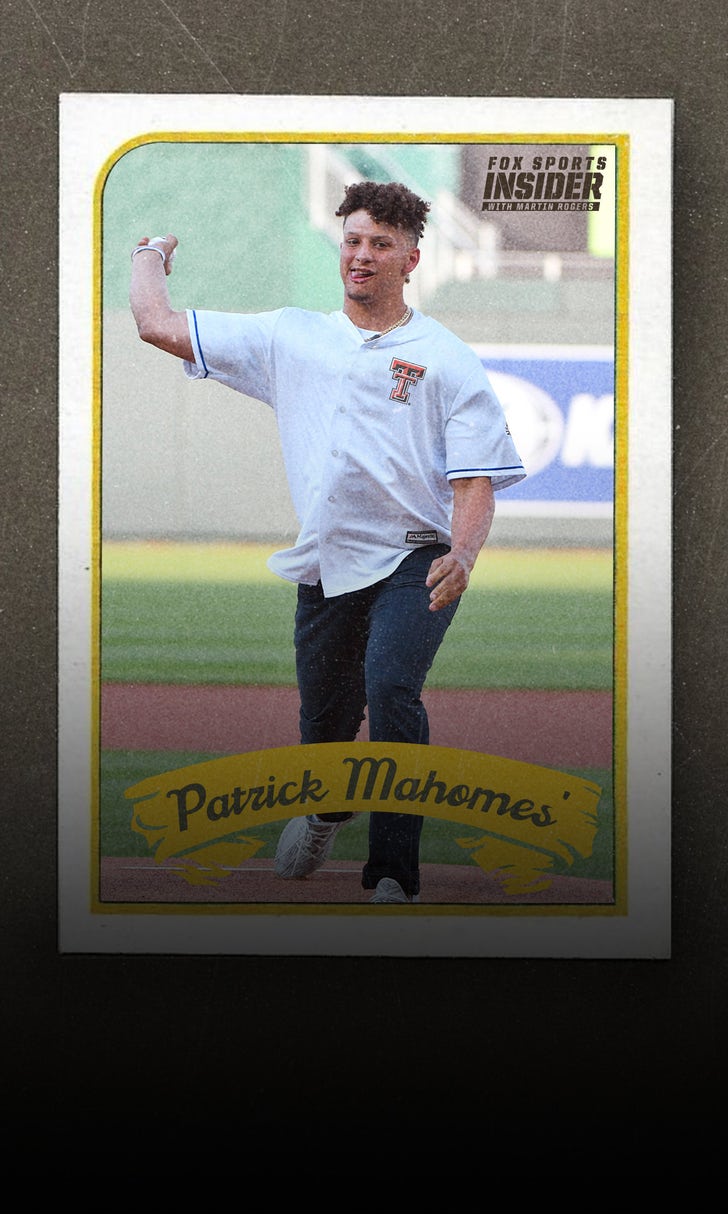 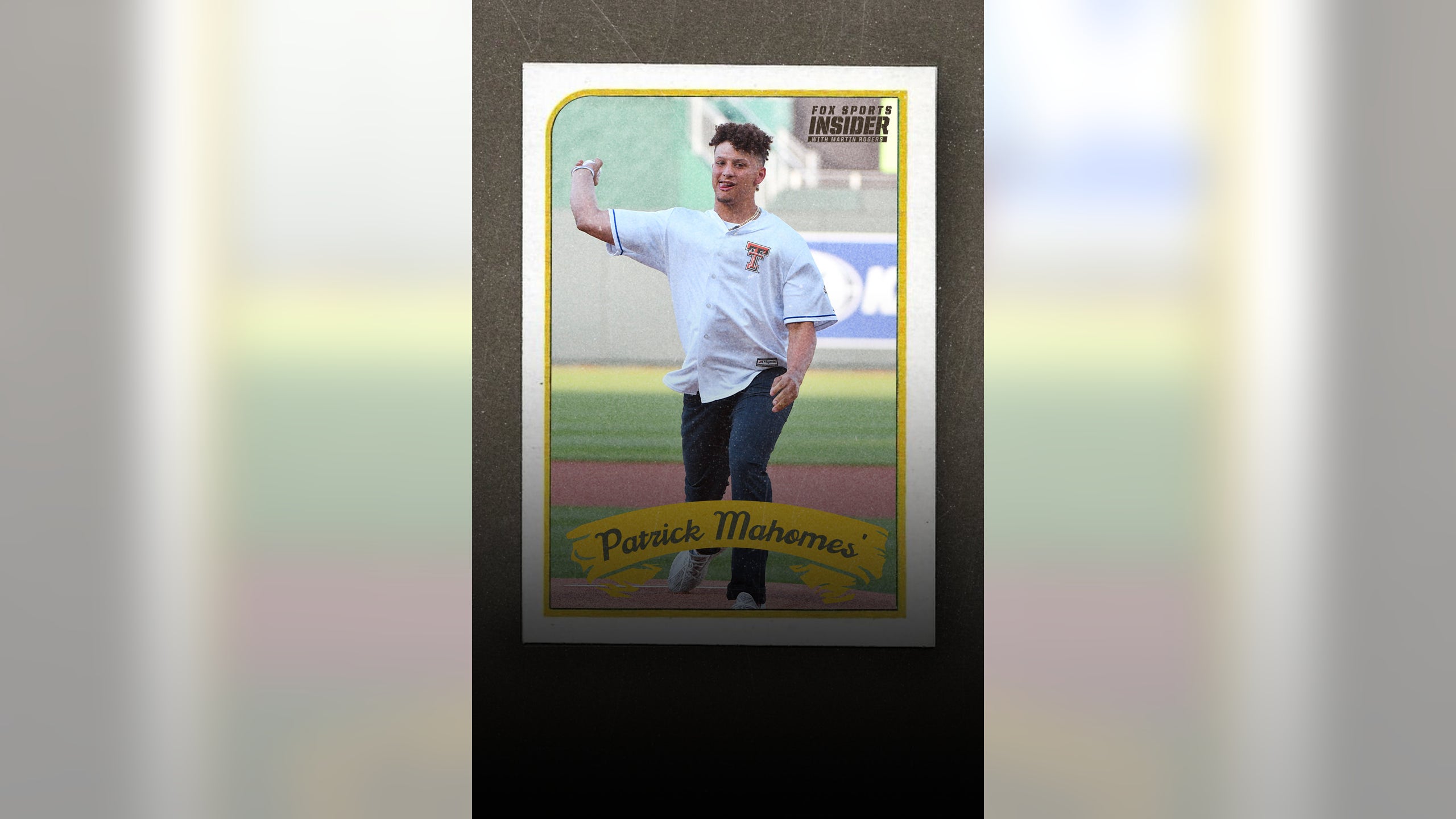 Every time – and it happens pretty frequently – Johnathon Tripp hears a commentator on a National Football League broadcast describe a Patrick Mahomes throw as "impossible," he gives a little laugh.

"It’s really difficult, but obviously it’s not impossible because he’s doing it," Tripp, Mahomes’ former Texas Tech baseball teammate, told me via telephone. "And I know where it comes from. It comes from baseball."

As Mahomes prepares to take on the Tampa Bay Buccaneers in Super Bowl LV, the Kansas City Chiefs' quarterback gave a self-deprecating assessment Wednesday of his time on the diamond for the Red Raiders, which included just one ill-fated pitching outing as a freshman before he decided to focus on football. 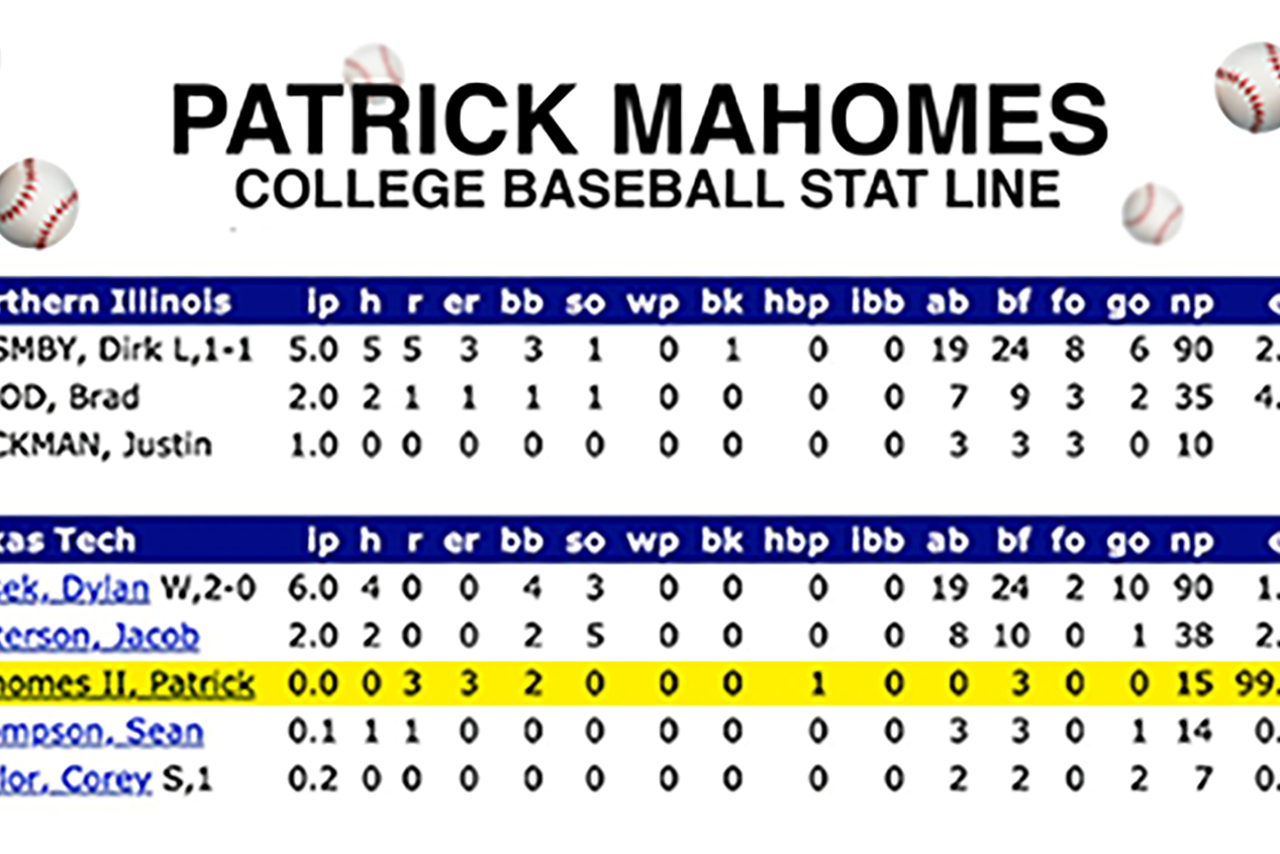 Yeah, the gridiron thing has worked out pretty well.

"I think I have an infinity ERA, which isn't probably a good one," Mahomes told reporters. "That's something I'm not very proud to have on my record."

Introduced into the game with Texas Tech leading 6-0 in the ninth inning, Mahomes walked Carl Russell, drilled Malique Ziegler in the backside with a fastball and walked Justin Fletcher on five pitches.

Each of the three scored, spawning the undesirable ERA, and Mahomes never pitched competitively again.

But don’t be fooled into thinking his college baseball career was a negative.

Indeed, the sport might have given Mahomes the ability to make game announcers and fans alike shake their heads in wonderment.

Tripp, who signed with the Cincinnati Reds organization in 2019 and is currently playing with the Florence Y’Alls (formerly Florence Freedom) of the Frontier League, regularly notices baseball techniques when he watches Mahomes play for the Chiefs.

"Like when he rolls out of the pocket to the right and lets off one of those throws – you’ve seen it – which is literally a sidearm throw on the run across his body," said Tripp, who had a locker stall next to Mahomes' at Texas Tech. "It is similar to a slow roller where the shortstop grabs it. It is very common for shortstops and third basemen to have the arm that low because of the momentum. It looks weird in football, but I’m sure it feels natural to him.

"Then, when a linebacker is blitzing up the middle, Patrick might be back-pedaling and looking left and right. He will drop his arm real low and get it out as fast as he can to get it around a defensive player. It’s an unbelievable throw, it’s so athletic. But if you’re a baseball player, it’s not impossible."

Patrick starred at Whitehouse High School in Whitehouse, Texas, and was drafted in the 37th round by the Detroit Tigers. At 14, he helped lead Rose Capital East to the Junior League World Series championship game.

In college, Mahomes held serious aspirations to excel in both sports, but the scheduling rigors ultimately proved too demanding. With football and pitching requiring different physiology, Mahomes bulked up during a freshman football season that saw him play the final four games and light up Baylor for six touchdowns.

Teammate Dylan Dusek said Mahomes made an admirable effort to be at the baseball field whenever he could, but football commitments severely impacted his practice opportunities.

"In spring, he rarely participated in an entire practice with us, as he either had weights or something involved with football," Dusek said in an email. "Pat was a great pitcher, [but] just one semester of fully focusing on football can deter you from your full capability in baseball. We all knew he had the talent. If he would have been there the entire year, there is no doubt he would have been a great player for us."

Texas Tech baseball coach Tim Tadlock loved having Mahomes around, correctly assuming his positivity would have an uplifting effect on the group. After the Northern Illinois game, Mahomes did not pitch again, but he stayed on as a backup infielder. During a weather delay in a game at Kansas State, he grabbed a spare football as the team stretched at an indoor training facility and hurled passes for his teammates.

"He had a lot of positive energy about him," Ryan Moseley, now a pitcher in the Los Angeles Dodgers organization, told me. For Moseley, and the rest of the players I spoke to, the most memorable part of Mahomes’ one trip to the mound wasn’t how he played.

"It was the huge standing ovation that he got," Moseley added. "He was pretty muscular at that point, and his velocity was down. It was tough for him because he didn’t have the pitching reps in because he’d been busy with football. But he came in with everyone standing up and cheering for him.

"He pitched, he got taken out, and it was the same again – a standing ovation. The fans were so into it, having the QB out there pitching. You could see he was bummed and had this kind of embarrassed little smile. But everyone had his back."

When the team needed a rally, Mahomes could be relied on to try to spark one with encouraging words, and several players said they sensed he enjoyed being part of a more normal college experience, going to parties, relaxing with the guys, away from the intensity that is football in Texas.

"I think the baseball experience actually fueled him in some way," teammate Hunter Hargrove said. "He always wanted to be the best (Mahomes was intensely competitive in locker room ping-pong games). How baseball worked out maybe made him see that football was for him but also that he saw what it was like to struggle, and it pushed him on further.

"He’s human, even though it doesn’t always look like it when he plays football. The funniest thing is to see him now in commercials and all that because he is such a regular guy – and a good guy."

Mahomes now finds himself in the biggest game in football for the second year in a row, and while his old baseball crew support different NFL teams, they’re all honorary Chiefs fans.

Tripp saw Mahomes most recently at a Dallas Stars game a couple of years ago and said Mahomes was unaffected by the fame, fortune and spotlight that now make up his reality. He also says the sight of what Mahomes can do with his arm on the gridiron is a welcome reminder that playing multiple sports – in an era when early age specialization is increasingly prominent – can only help a young athlete.

"Yeah, it’s a baseball throw," Tripp said. "But he’s doing it with a football — not a baseball — while there are a bunch of guys trying to tackle him. So it’s still pretty ridiculous."

Another Dimension
Is Kyler Murray a Super Bowl-level quarterback? J.J. Watt seems to think so, and Colin Cowherd agrees with the new Cardinal.
20 hours ago