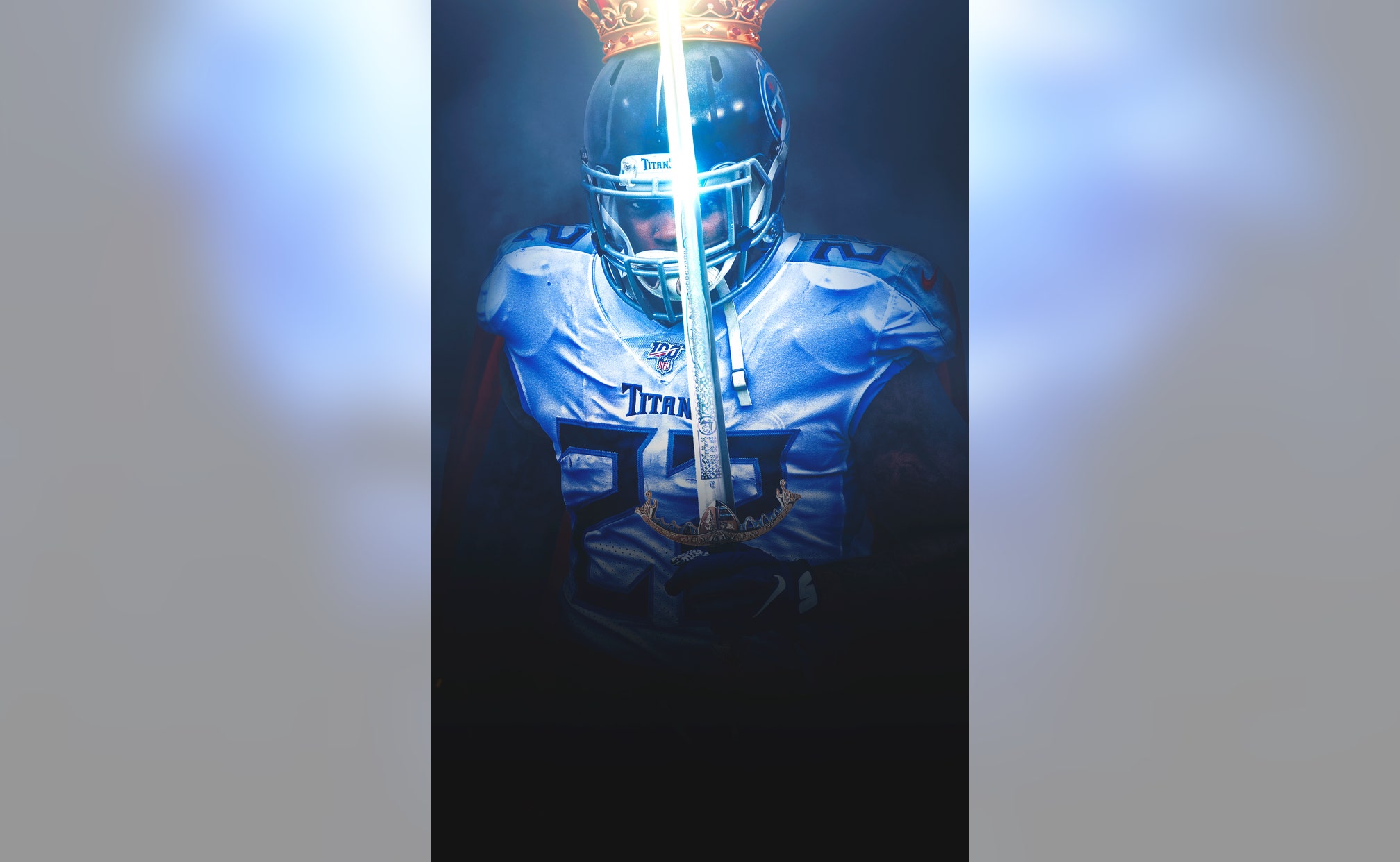 Back in January – when reporters could go into NFL locker rooms, and we actually were allowed to hug our grandparents – I spotted a crown in the locker Derrick Henry was using at M&T Bank Stadium in Baltimore.

The Titans had just beaten the Ravens in the AFC Divisional playoffs, and the bass of a Roddy Ricch song mixed with the excited whoops of players delighting in their underdog victory.

Tennessee was one game away from the Super Bowl, and the energy was electric.

While the Titans didn’t ultimately make it to Miami, the team came close because of Henry. That night in Baltimore, he rushed for 195 yards on 30 carries and even threw a touchdown pass. I asked him where he got the crown – a golden, plastic marvel studded with fake jewels – and he said a fan gave it to him.

Baltimore couldn’t figure out how to stop someone like him, a brick house that grew legs and learned how to run at the speed of light.

Almost everything has changed in the 10 months following that game, but one thing hasn’t: Teams still can’t stop Henry.

The Colts were the latest squad to realize they were powerless against his rumbling Sunday. The Titans delivered a statement with their 45-26 victory over Indianapolis, and Tennessee now sits in first place in the AFC South.

It was obvious Henry was the difference maker. He scored three touchdowns before the half (and would’ve scored four if Ryan Tannehill hadn’t faked to him inside the 5), and he's currently on track to win his second consecutive rushing title.

Not only did Henry have a monster rushing game, he did it against the Colts. That’s saying something, because Indy’s rush defense ranked third in the league entering Week 12.

The Colts have allowed an average of only 89 rushing yards per game, and this was the first time Indy has allowed one guy to rush for more than 100 yards all season. In fact, it was just the third time the Colts allowed a player to hit the 100-yard mark over the past three seasons.

The player in the other two games?

I'll give you one, solitary guess.

I know quarterbacks usually win the MVP award, and with good reason. They're involved in almost every offensive play – duh – and if you don’t have a good one, your chances of doing well in the playoffs aren’t great.

If I had to put money on it right now, I’d say Patrick Mahomes will be the guy who takes home that honor, and he would deserve it. The Chiefs QB has thrown for nearly 3,500 yards with 27 TD passes and only two interceptions through 12 weeks, carrying the Chiefs to a 10-1 record.

He also beat the GOAT on Sunday in Tampa.

But I think we need to consider how deserving Henry really is of the MVP. If a running back has ever earned the honor — which many have, yet few have been rewarded with — it’s Henry.

Whether it was last season in the playoffs or the game this past Sunday, Henry is more often than not the reason the Titans win.

This isn’t to say that guys like AJ Brown and Tannehill don’t play their part — they do. And the Titans aren't bad.

Without Henry, however, they wouldn’t be where they are or have been where they’ve gone. He’s a cheat code in a video game, having surpassed 5,000 career rushing yards with 53 career touchdowns. This is his third season with 1,000 rushing yards and 10 rushing touchdowns.

If you aren’t sure, let me be clear: those stats are good.

And Brown agrees with me.

Perhaps who deserves it depends on how you define "MVP." Is it more valuable to be a once-in-a-generation quarterback on a great team that has a good chance of making it to its second Super Bowl in two years?

Or is it more valuable to be a running back on a team that probably wouldn’t be in first place in its division or make it deep into the playoffs without you?

It’s almost like comparing apples to oranges, and there’s a lot of season left, so this is all premature (but that’s what any sports media person worth her salt does — makes bold and potentially wrong predictions). After Week 12, however, it's become clear who is sustainably great.

And I’d argue that making as much of a difference as Henry has when you aren’t the quarterback is more impressive. Running back is such a physical and grueling position to play. The stamina, strength and grit it takes to do what Henry does is almost superhuman.

He’s earned that crown many times over, and he’s probably earned a more formal piece of hardware, too.

Only time will tell, and I’m not a doctor, so don’t take my word for it. But if there’s one comforting constant in this unpredictable year, it’s that Derrick Henry will juggernaut himself through a defense. And I, for one, am grateful we get to watch such greatness.

Going For Glory (And The Win)
Mahomes was out. But that didn't stop Andy Reid from laying it all on the line with Chad Henne, Charlotte Wilder writes.
5 hours ago

Top Plays: Divisional Sunday
The NFL playoffs featured a game-changing turnover for the second straight day. We broke down the big moments.
19 hours ago
those were the latest stories
Want to see more?
View All Stories
Fox Sports™ and © 2021 Fox Media LLC and Fox Sports Interactive Media, LLC. All rights reserved. Use of this website (including any and all parts and components) constitutes your acceptance of these Terms of Use and Updated Privacy Policy. Advertising Choices. Do Not Sell my Personal Info