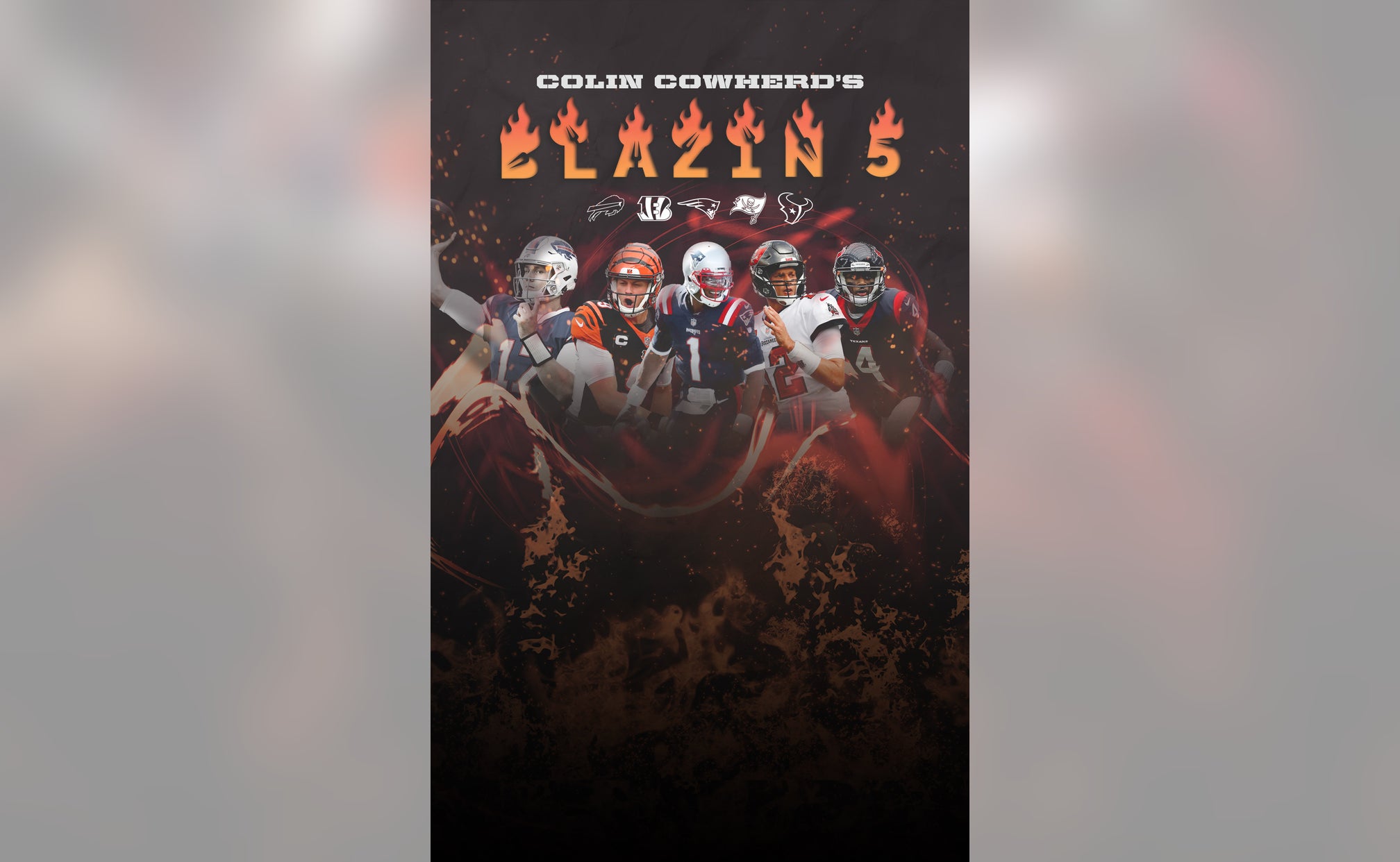 If it's the weekend, it must be time for Colin Cowherd's Blazin' 5, where Colin gives his favorite picks against the spread ahead of Sunday's slate.

With two weeks in the books, defense is one of the emerging themes to Colin's approach. Let's check out how Cowherd sees the board this week, with all odds via FOX Bet.

With Josh Allen at the helm, the Bills lead the NFL in passing yards and are 3rd in average total yards per game so far this season.

On the defensive side of the ball, Buffalo ranks in the top 5 in both total defense and rushing defense. The Bills have allowed a mere 75.5 yards per game on the ground (3rd in the NFL).

But Colin thinks the Bills' defense will rule the day. 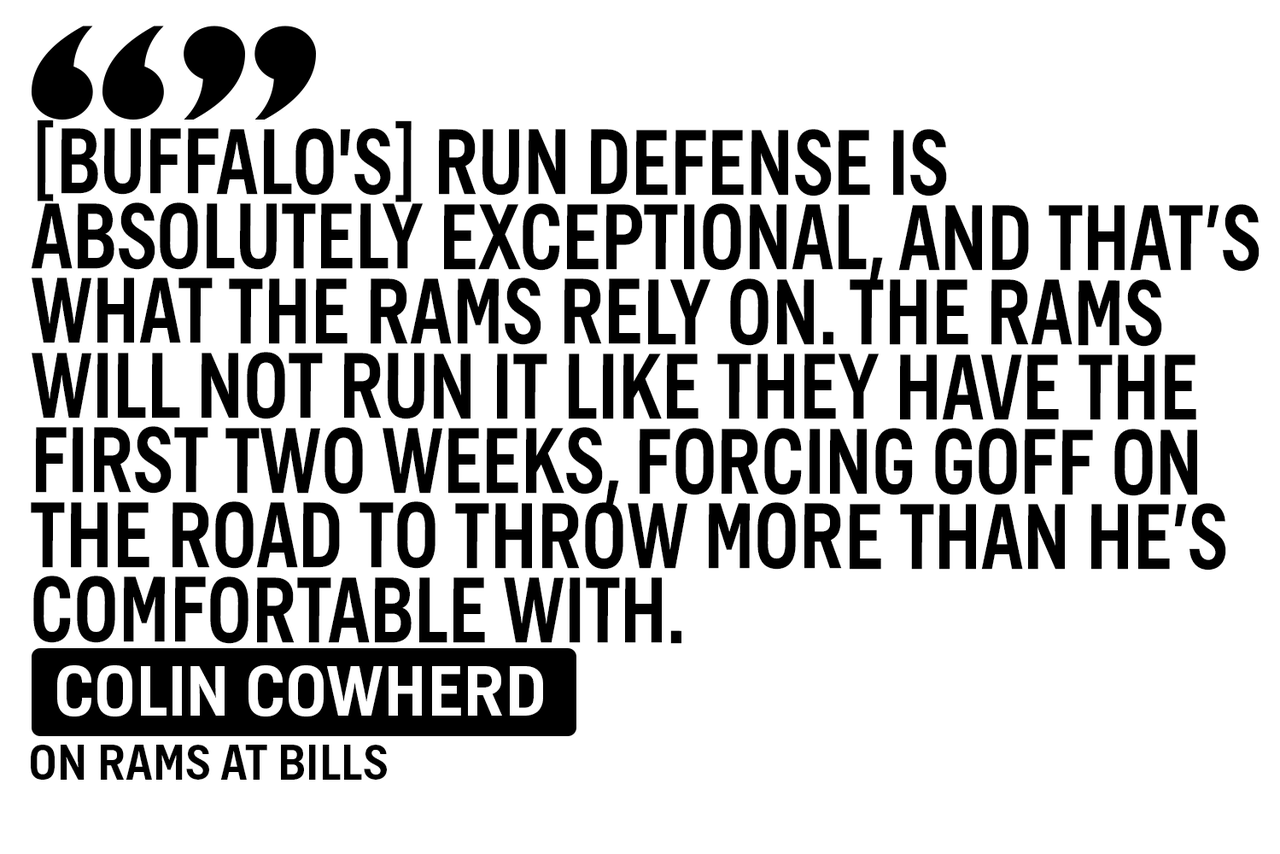 Here's a scary trend for Las Vegas: New England is 5-0 in their last five games after allowing 30 points or more in the previous matchup, as the Patriots did last week against the Seahawks.

On the opposite end, Las Vegas QB Derek Carr is 16-32 in his career on the road.

The Raiders have struggled to stop the passing attack this season. After two weeks, Vegas sits 29th in the league in passing yards allowed (571), giving up an average of 6.5 yards per play.

Combine that with the letdown from a big win over the Saints, and Colin's riding with Belichick & Co. 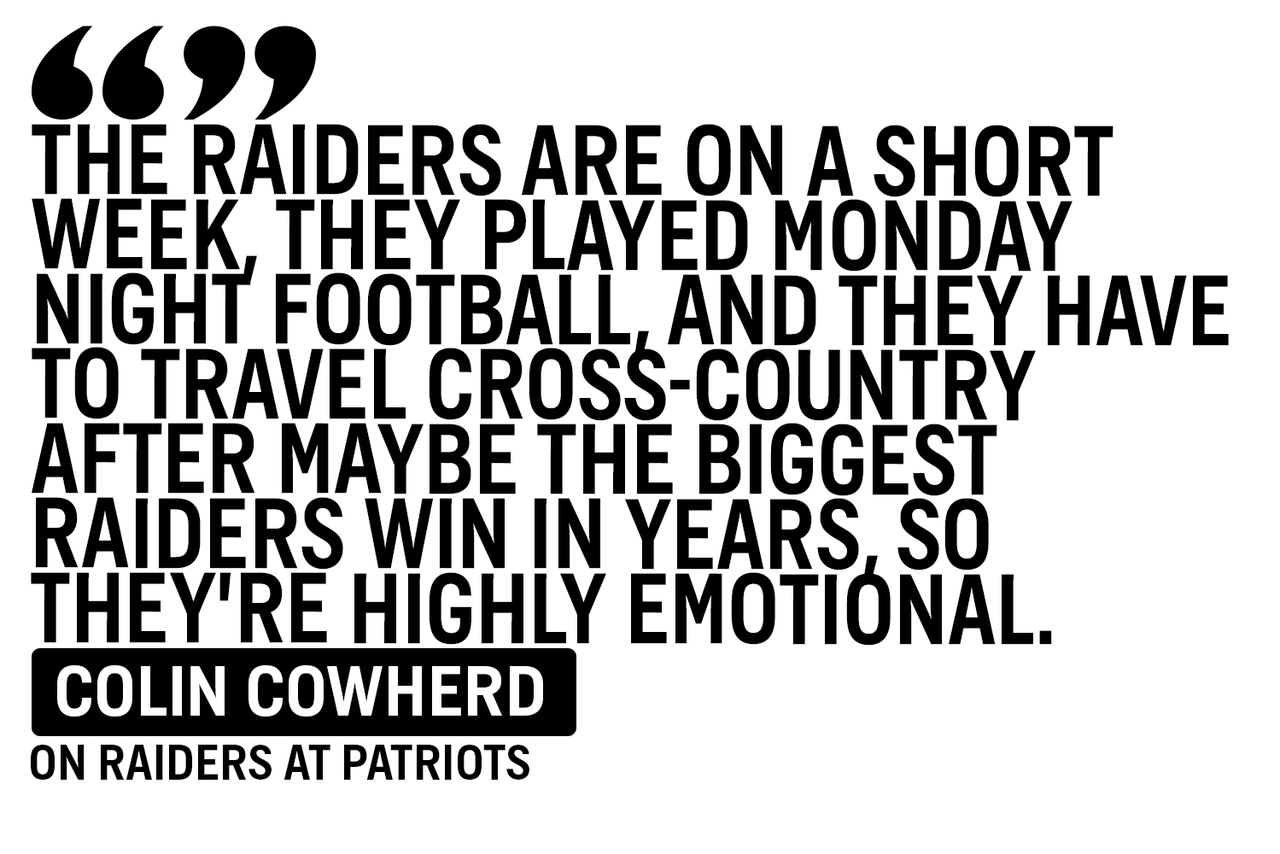 Cincinnati leads the all-time series 9-3-1, not to mention Philadelphia is 0-9 against the spread in its last nine matchups against the Bengals.

This one could come down to how comfortable Carson Wentz can be on Sunday. The Bengals blitz 39.7 percent of the time, the fifth-highest rate in the NFL.

The Eagles sit at 30th in the NFL in offensive drives ending in a score (28 percent). Add it up, and Colin believes the Bengals can pull off an outright upset. 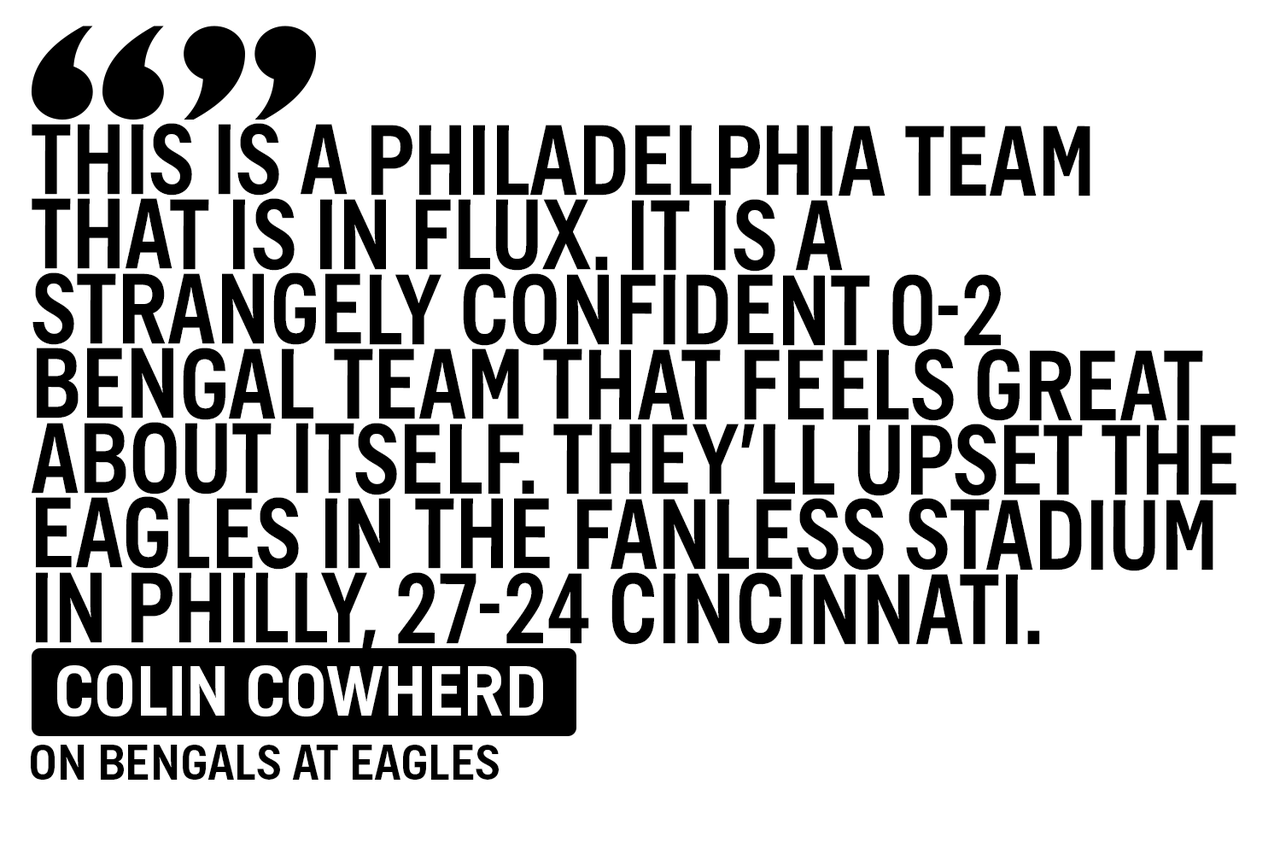 The Steelers are averaging 254.5 passing yards per game, ranking 10th in the NFL for the 2020 season.

But that same offense needs to take better care of the football, as Pittsburgh has allowed at least one giveaway in 25 straight games. They should take care of business against Houston, although Colin thinks it will be close.

It's worth noting that the Texans have been able to shut down the pass, allowing just 190.0 yards per game through the air (ranking 3rd in the league). 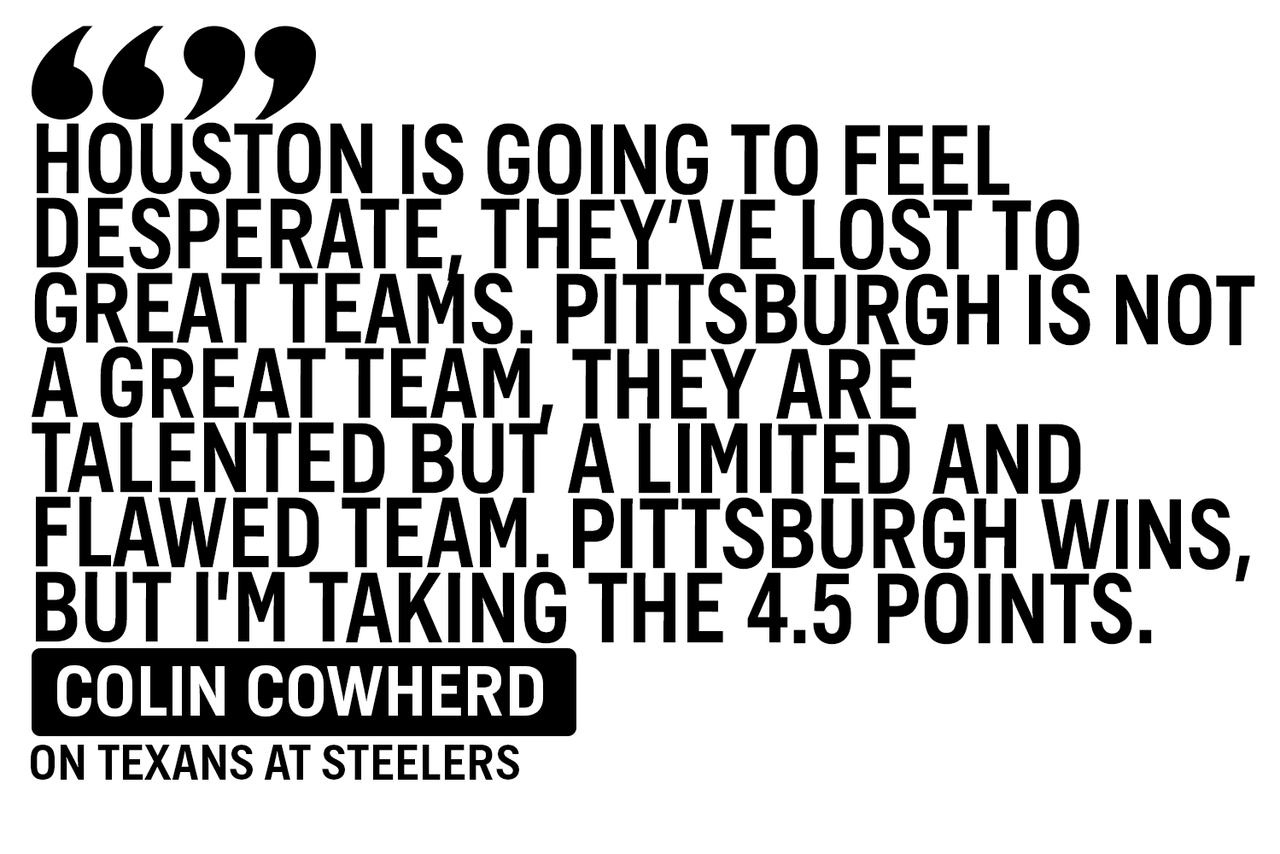 Denver's sophomore QB Drew Lock went down with an injury in Week 2, and his replacement Jeff Driskel is 1-7 as a starter.

The Broncos have been ravaged by injury, in fact, with about $47 million in contracts on injured reserve, including key players at wide receiver, cornerback and defensive end.

Meanwhile, the Bucs look dominant on defense this season. Tampa Bay is permitting a mere 2.91 yards per carry through two games, boasting the second-best run defense in the league (behind Pittsburgh, 2.89 yards per carry). 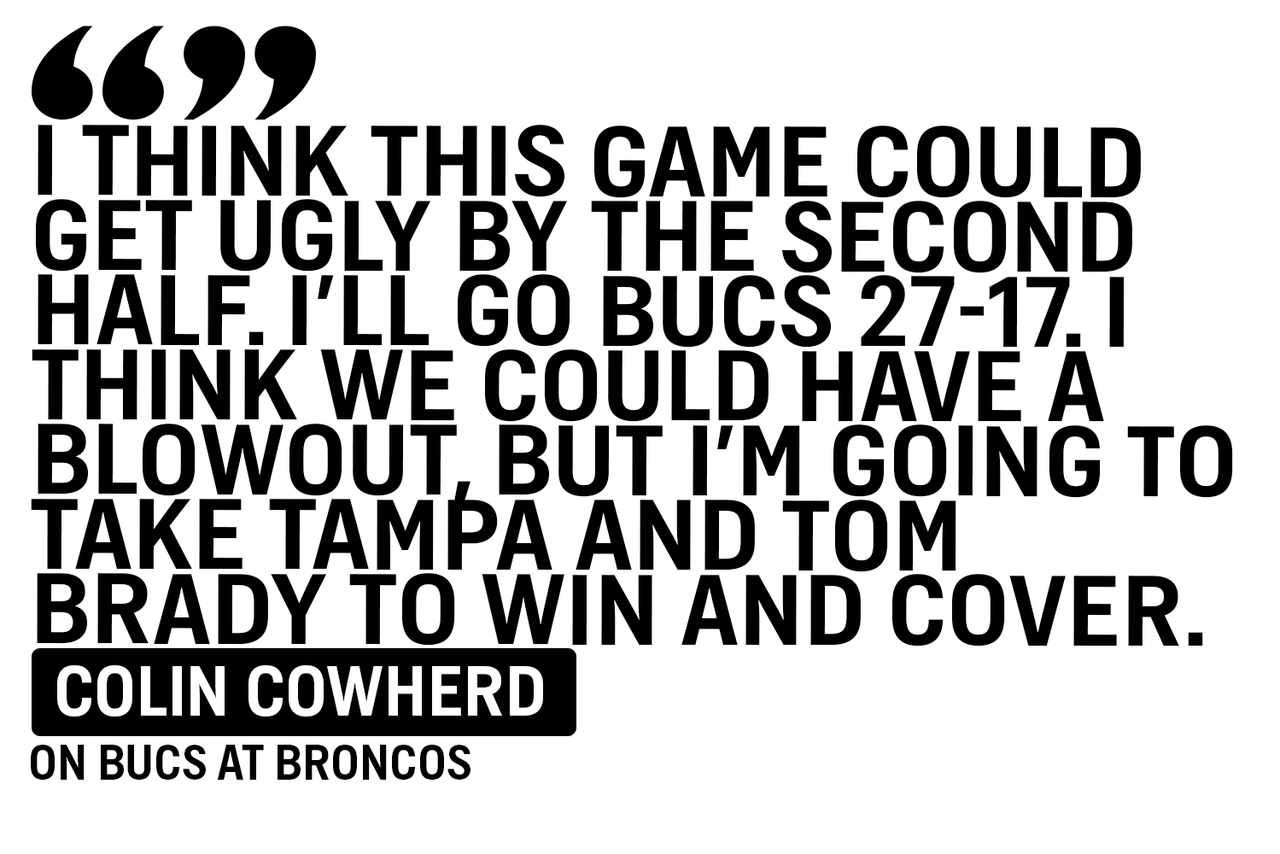 A Tale Of Two 5-2 Teams
The Rams and Bears are both 5-2, but after their Monday night matchup, it's clear both teams are on different levels.
8 hours ago

Help Wanted In Dallas
The Cowboys are on pace for one of the worst seasons in franchise history. Is it time for Jerry Jones to clean house?
12 hours ago

The Unexpected and the Uncanny
Week 7 was the craziest of the season so far, even though it featured a few predictable performances, writes Charlotte Wilder.
15 hours ago

No Passing These Bucs
In his Week 7 review, Geoff Schwartz explains why Tampa Bay is the NFL's best team. Plus, Mike McCarthy is in trouble in Dallas.
15 hours ago

Spitting Image
Sunday night proved that Kyler Murray is chasing Russell Wilson for the title of 'Best Undersized Quarterback' in the NFL.
18 hours ago
those were the latest stories
Want to see more?
View All Stories
Fox Sports™ and © 2020 Fox Media LLC and Fox Sports Interactive Media, LLC. All rights reserved. Use of this website (including any and all parts and components) constitutes your acceptance of these Terms of Use and Updated Privacy Policy. Advertising Choices. Do Not Sell my Personal Info