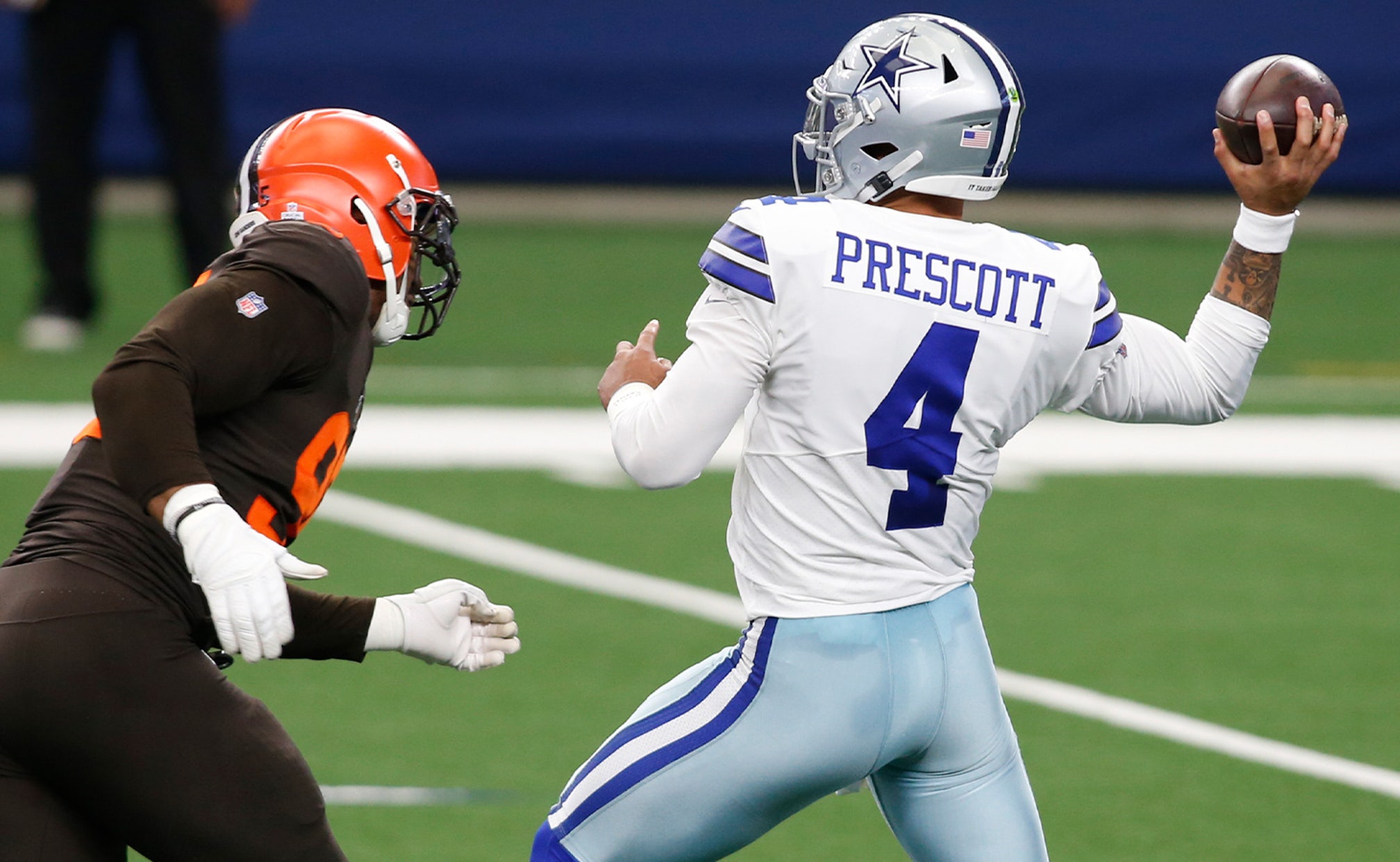 Sunday's slate of Week 4 matchups came equipped with a healthy dose of fireworks, including a shootout at AT&T Stadium in Dallas.

Check out the major takeaways from the early window of NFL games:

(All odds information via FOX Bet)

Odell Beckham Jr. and the Cleveland Browns flexed their muscle in the trick-play department, with OBJ scoring three times in a breathless 49-38 win for Cleveland.

On the defensive side of the ball, Myles Garrett recorded two sacks and forced a fumble.

Meanwhile, Dallas' defense continued trending in the wrong direction, and has now allowed 38-plus points in three straight games for the first time since their inaugural season in 1960.

The win pushes the underdog Browns, who were +4 coming into the tilt, to 3-1 on the season, while the Cowboys fall to 1-3.

Lamar Jackson and the Baltimore Ravens rinsed the sour taste of Monday night's 34-20 loss to the Kansas City Chiefs out of their mouths with a big win over the Washington Football Team.

After finishing with just 97 passing and 83 rushing yards in Week 3, Jackson hit Washington to the tune of 193 yards through the air and 53 yards rushing.

As the weekend's heaviest favorites, heading into the matchup at -14.5, the Ravens couldn't quite cover the large number in the 31-17 win, but moved to 3-1 on the season.

Jackson averaged 7.6 yards per carry on the day, and the Ravens are now 12-2 in Jackson starts where the reigning MVP rushes for at least 6.0 yards per carry.

And as a cherry on top, the Ravens put in backup quarterback Robert Griffin III, drafted by Washington second overall in 2012, to close out the blowout.

The back-and-forth shootout saw Brady strike pay dirt to five different receivers, as the Buccaneers held the Chargers scoreless in the fourth quarter.

With the win, the 43-year-old Brady extended his winning streak against rookie quarterbacks to 10 straight.

The Bucs have now won three straight after losing their season-opener to New Orleans, the 13th time that Brady has started the season winning at least three of his first four games in his 21-year career.

For those with a betting interest, the result wound up a push, with the Bucs favored by 7 prior to kickoff.

Drew Brees came into the week catching heat following a so-so start to the season.

An interception on New Orleans' first drive didn't dispel the chatter early, but Brees and the Saints locked in after an early 14-point deficit, rattling off 28 unanswered points before the halftime break.

It wasn't smooth sailing for the Saints, though. The Lions battled back to make it a one-possession game in the end, but New Orleans ultimately covered the -3 spread in the 35-29 triumph.

Russell Wilson powered the Seahawks to a 31-23 victory, as Seattle moved to 4-0 for the second time in franchise history.

D.K. Metcalf cracked the century mark in receiving yards (106) for the second consecutive game, while running back Chris Carson racked up a pair of rushing touchdowns as the favored Seahawks covered the -6 spread.

In his first two seasons, Seattle is 6-0 when Metcalf collects 90 or more receiving yards, and his 24.8 yards per reception this season is second in the NFL.

Joe Burrow got the first win of his young Bengals career, thanks in large part to a trio of touchdowns from running back Joe Mixon.

Mixon scored two TDs on the ground and one through the air, as the favored Bengals (-2.5) earned a 33-25 win, their third victory in the last 20 contests.

In the process, Burrow became the first rookie in NFL history to throw for 300+ yards in his first three games.

The Arizona Cardinals, favored by 3 heading to Carolina, had no answers for Teddy Bridgewater, as the Panthers signal-caller racked up three touchdowns, including an 18-yard scramble on the ground.

Despite an equally solid performance from Kyler Murray (133 passing yards and 78 rushing yards), who threw three touchdowns on the day, the Cardinals fell to 2-2 on the season following the 31-21 win for the Panthers.

With matching 0-3 records coming into Sunday, something had to give when the Vikings visited the Texans ⁠— unless they tied, of course.

As it happened, that wasn't the case, with Minnesota cashing in on a big day from Dalvin Cook (130 yards rushing, two rushing touchdowns) to win 31-23 and not only cover the +3.5 spread, but win outright.

Your Average American QB
Jared Goff's numbers might be not be eye-popping, but he continues to get the job done for the Los Angeles Rams. How?
1 hour ago

Inside The Patriots' Shocking Decline
Something has changed in New England and it has done so with stunning rapidity, Martin Rogers writes.
19 hours ago

Playing Favorites In Week 8
A big-time NFC West clash leads Week 8, and Jason McIntyre's riding with the Seahawks in his parlays and teasers.
23 hours ago