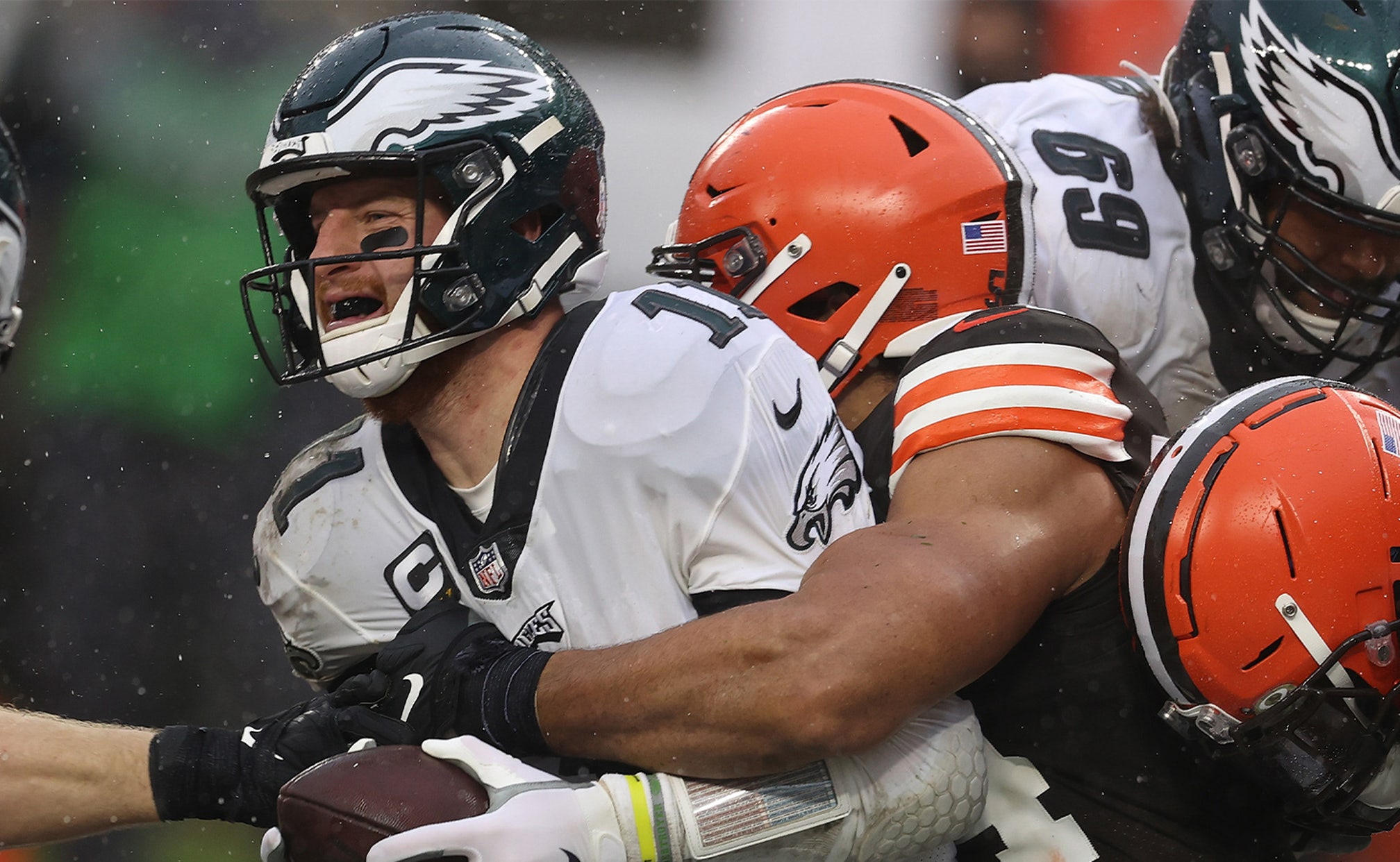 Through 11 weeks of the 2020 NFL season, the Philadelphia Eagles are in first place in the NFC East ⁠— but you wouldn't know it based on the mood surrounding the team.

That's because the division is so historically bad that the 3-6-1 Eagles have the slenderest of margins to lead the East right now, by virtue of their Week 3 tie with the Cincinnati Bengals.

It's more of a trudge to the finish than it is a sprint, but someone among the Eagles, Giants, Cowboys and Washington will claim the victory and host a playoff game this postseason.

And despite currently being in the driver's seat, there's waning confidence the Eagles will be the ones to do it.

The biggest source of the qualms in Philadelphia center around one man: franchise quarterback Carson Wentz.

Wentz is on track to have his worst season since his rookie year, when the Eagles went 7-9 in 2016. He's already matched his career high for interceptions, 14, and has fumbled the ball 10 times this season.

His completion percentage of 58.4 percent would be the lowest of his career, as would his 73.3 passer rating.

Following Sunday's 22-17 loss to the Cleveland Browns, which saw Wentz throw two of his league-leading 14 interceptions and fumble once, Wentz holds the inauspicious title of the league's most turnover-prone player.

Yes, there are injuries to consider, particularly along Philadelphia's offensive line, but that's life in the NFL.

There's plenty of blame to go around for the league-leading 40 sacks Wentz has endured this season, seven more than second-place Russell Wilson.

But while Wentz might not have all the time in pocket that he'd prefer, a patchwork o-line doesn't account for some of the fifth-year quarterback's rookie-like play.

As former NFL head coach Rex Ryan bluntly put it on ESPN's Get Up on Monday morning: "Carson Wentz is garbage."

And speaking of rookies, there are calls for head coach Doug Pederson to make a switch at the position and hand control of his offense over to 2020 second-round pick Jalen Hurts.

Emmanuel Acho doesn't see the sense in that move, citing the daunting upcoming schedule for Philly.

Max Kellerman of First Take sees it a different way, however. To Kellerman, benching Wentz would hold the quarterback responsible for his shortcomings this season.

Wentz's monster contract must also be factored into the calculus of any Pederson decision.

The Eagles were quick to extend their franchise quarterback in 2019, locking him up through 2024 with a four-year, $128 million deal.

As The Sporting News' Vinnie Iyer spelled out in an in-depth breakdown, the Eagles "literally cannot afford to sit Wentz" for Hurts, given the financial commitment.

As of now, Pederson isn't ready to send Wentz to the bench. After all, the Eagles are in the midst of a division title chase and are in control of their own destiny.

Pederson insists that would send a bad message, and that the team still has a lot to play for.

Will Wentz be able to correct his mistakes and get the Eagles back on track?

It'll be a tough run with the Seahawks, Packers and Saints all next on the docket. But the reward could very well be a home playoff game, despite all the tribulations of roughly the first two-thirds of the season.

Bills Pick Off Ravens To Advance
A low-scoring first half gave way to one explosive, game-changing play. Here's how Buffalo knocked off Lamar Jackson & Co.
1 hour ago

One More Matchup For The Ages
Tom Brady and Drew Brees have faced countless big occasions before, yet Sunday’s showdown between the Bucs and Saints feels different.
23 hours ago
those were the latest stories
Want to see more?
View All Stories
Fox Sports™ and © 2021 Fox Media LLC and Fox Sports Interactive Media, LLC. All rights reserved. Use of this website (including any and all parts and components) constitutes your acceptance of these Terms of Use and Updated Privacy Policy. Advertising Choices. Do Not Sell my Personal Info