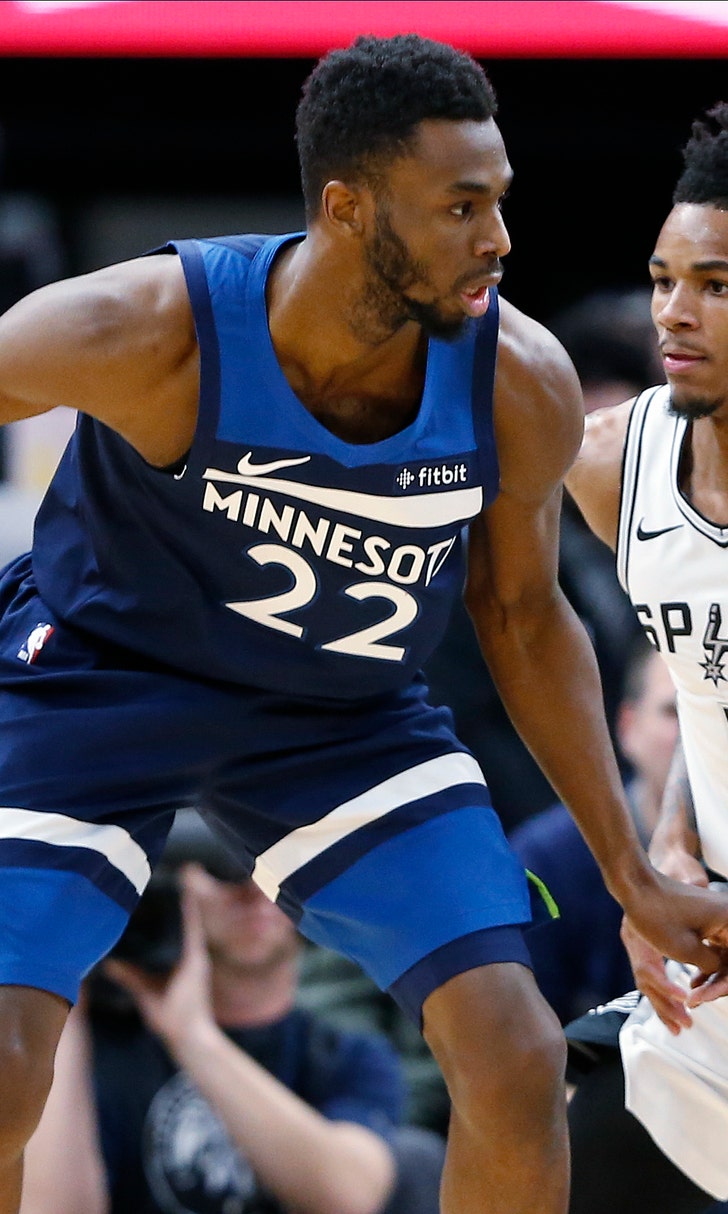 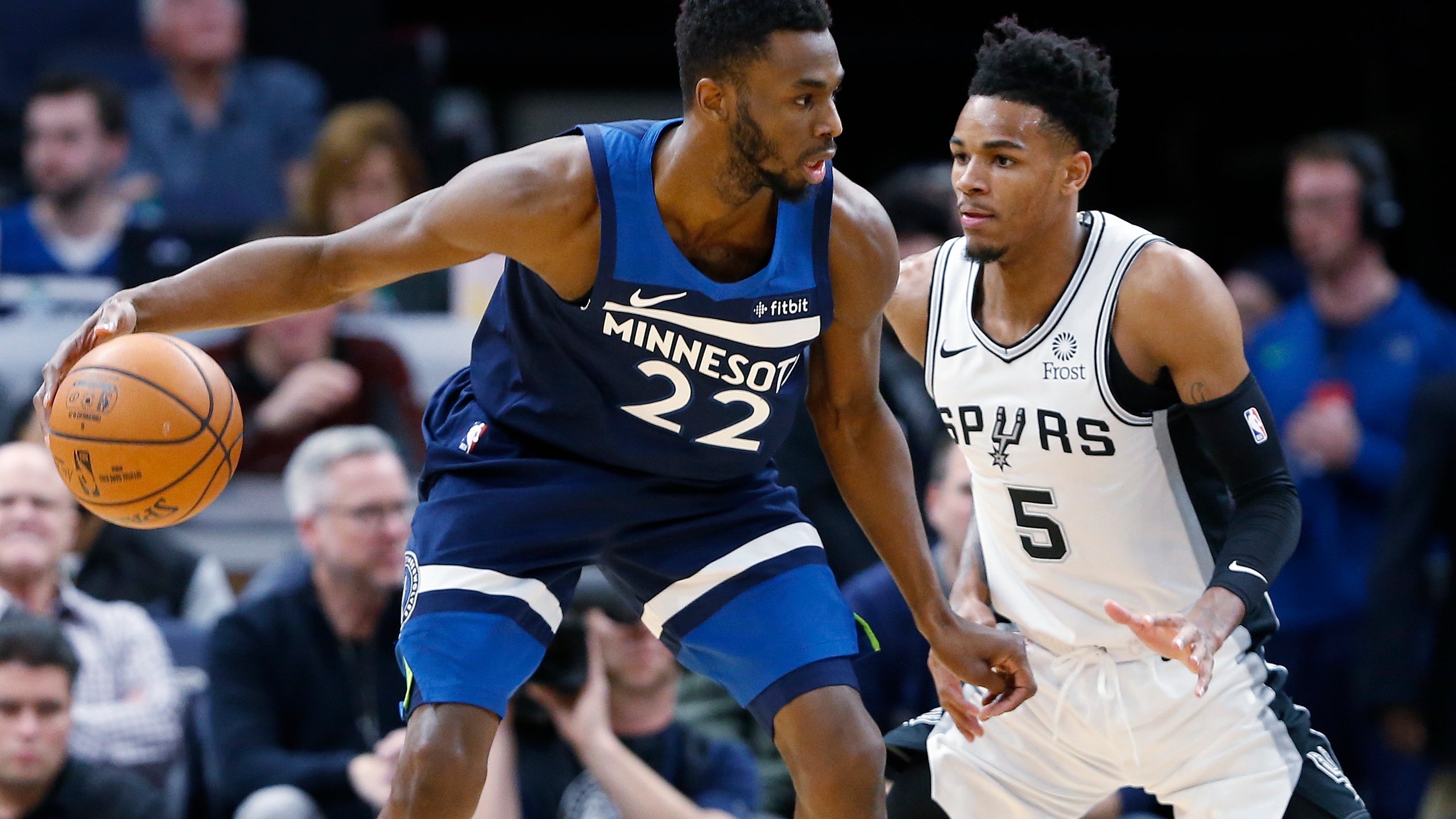 MINNEAPOLIS (AP) — Andrew Wiggins is making an impact all over the floor, from the arc to the rim, and the Minnesota Timberwolves are playing with a carefree connectedness that has helped elevate their overall performance.

These developments are not mutually exclusive.

Wiggins kept up his early season surge with 30 points on 12-for-23 shooting, and the Timberwolves handed the San Antonio Spurs their third straight loss, 129-114 on Wednesday night.

“Hey, if you haven’t watched us much, these guys are fun to be around,” coach Ryan Saunders said.

Karl-Anthony Towns scored 28 points and grabbed 11 rebounds, giving Minnesota’s maximum-contract duo a third consecutive game with 25-plus points apiece. Towns and Wiggins are currently the only teammates in the NBA averaging more than 25 points per game.

Wiggins, who added eight rebounds and seven rebounds, drained a pull-up 3-pointer from the left wing in the waning seconds of the third quarter to give the Wolves their biggest lead of the night at 106-95 before they breezed through the final 12 minutes. Wiggins, who has shown a sharp improvement in shot selection under Saunders, received a standing ovation when he was removed late in the game.

“I feel like everybody is happy for each other,” Wiggins said. “When someone does good, there’s genuine love.”

DeMar DeRozan had 27 points and LaMarcus Aldridge added 23 points for San Antonio, with the two stars combining to shoot 22 for 34 from the floor, but the Spurs finished just 3 for 17 from 3-point range. The Wolves were 11 for 34, a behind-the-arc advantage they rarely enjoyed in recent seasons.

Though they went just 6 for 45 on Sunday in an overtime defeat against Denver and this game ranked third-worst in the league at 30.8%, the increased volume can only help. The Wolves went 15 for 34 from 3-point range at Detroit in their previous game, a season best.

“I think opponents see our organization a little differently. They’ve been so used to us taking mid-ranges and layups and whatever the case may be, that we never adjusted to what the game has changed to,” Towns said. “Not only have we now changed to what the modern NBA is, we are excelling at it tremendously well and being pioneers of excellence with it.”

Towns and Wiggins have 35 games with 25-plus points apiece, the fourth-most in the NBA since Towns was a rookie in 2015-16. Wiggins hit the 30-point mark for the fourth time in five games.

“They executed, they were unselfish, and they made 3s,” said a dismayed Spurs coach Gregg Popovich, who took no questions from reporters. “They had a lot of guys that played well, and they were aggressive. From our end, I think we were very challenged defensively, another poor outing.”

The Spurs, with Tony Parker’s jersey now hanging from their arena rafters next to Tim Duncan’s and Manu Ginobili’s, are well past the glory days of their five NBA championships. Popovich lamented their “really soft” defense after a 135-115 defeat against Boston last week, and they entered this game ranked just 21st in the league in average points against.

They weren’t exactly overflowing with intensity on the defensive end in this one, either, squandering a strong start to the second half while watching the Wolves pull away for the third consecutive quarter. Bryn Forbes missed a 3-pointer that would have broken an 83-all tie, and Jake Layman, who was continually slashing to the basket all game, dropped in a finger roll for a lead the Wolves never relinquished. DeRozan picked up a technical foul after arguing a personal foul against him, and the free throws helped the Wolves on their way.

“Nobody wants to lose, but I’d rather that we have these mistakes now. We have plenty of time to clean it up. I know for a fact that we definitely will,” DeRozan said.

Spurs: For the third time in 11 games this season, the Spurs allowed 120-plus points. ... DeRozan and Aldridge each hit the 20-point mark for the second game this season. They did that 24 times during the 2018-19 regular season.

Timberwolves: Jeff Teague, who missed the last four games because of illness, returned to action at point guard in a reserve role, with rookie Jarrett Culver in the starting lineup for a fourth time in five games. Teague had 18 points and six assists in 23 minutes. ... The Wolves had consecutive 40-point quarters for the first time in franchise history, in the second and third.

Towns and San Antonio’s Rudy Gay were given double technical fouls for a testy exchange, sparked when Gay fouled Towns while he was shooting. A few minutes later, Towns and Wiggins swished 3-pointers on consecutive possessions to break a tie and give the Timberwolves a 57-51 lead.

Spurs: Play at Orlando on Friday night. They have a 43-18 lead in the all-time series with the Magic.

Timberwolves: Host Washington on Friday night, then Houston on Saturday night to conclude a stretch with five home games, and six total, in eight days.