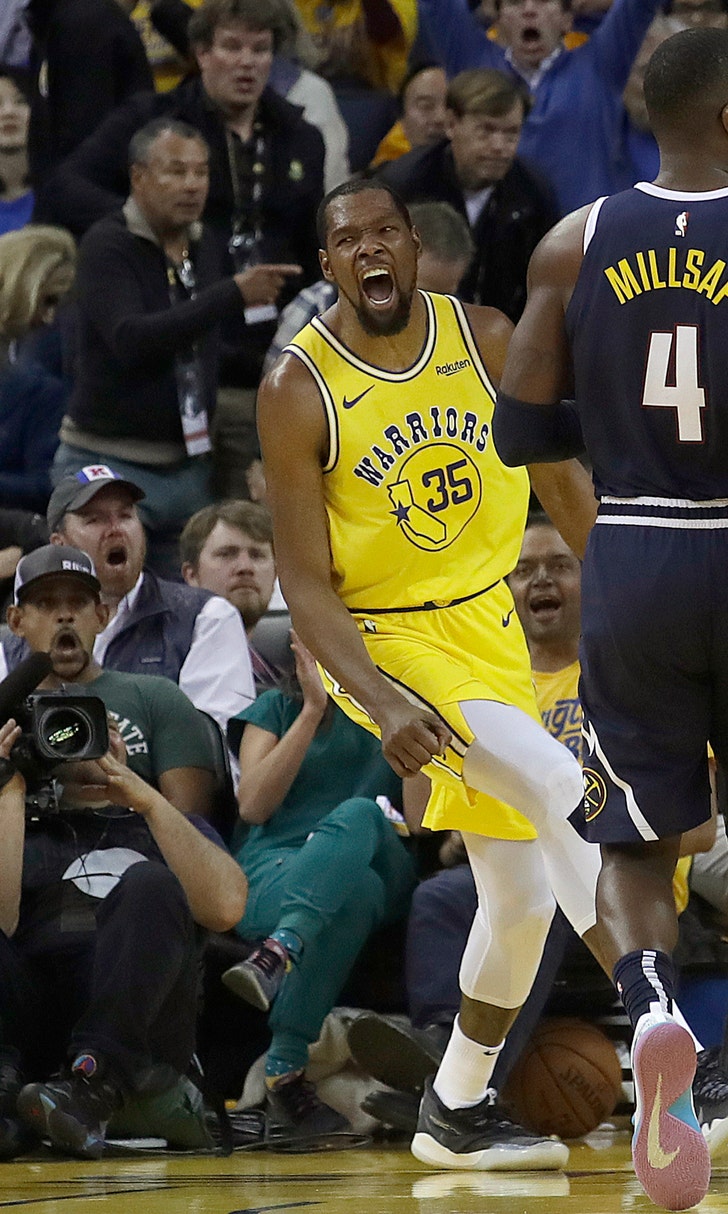 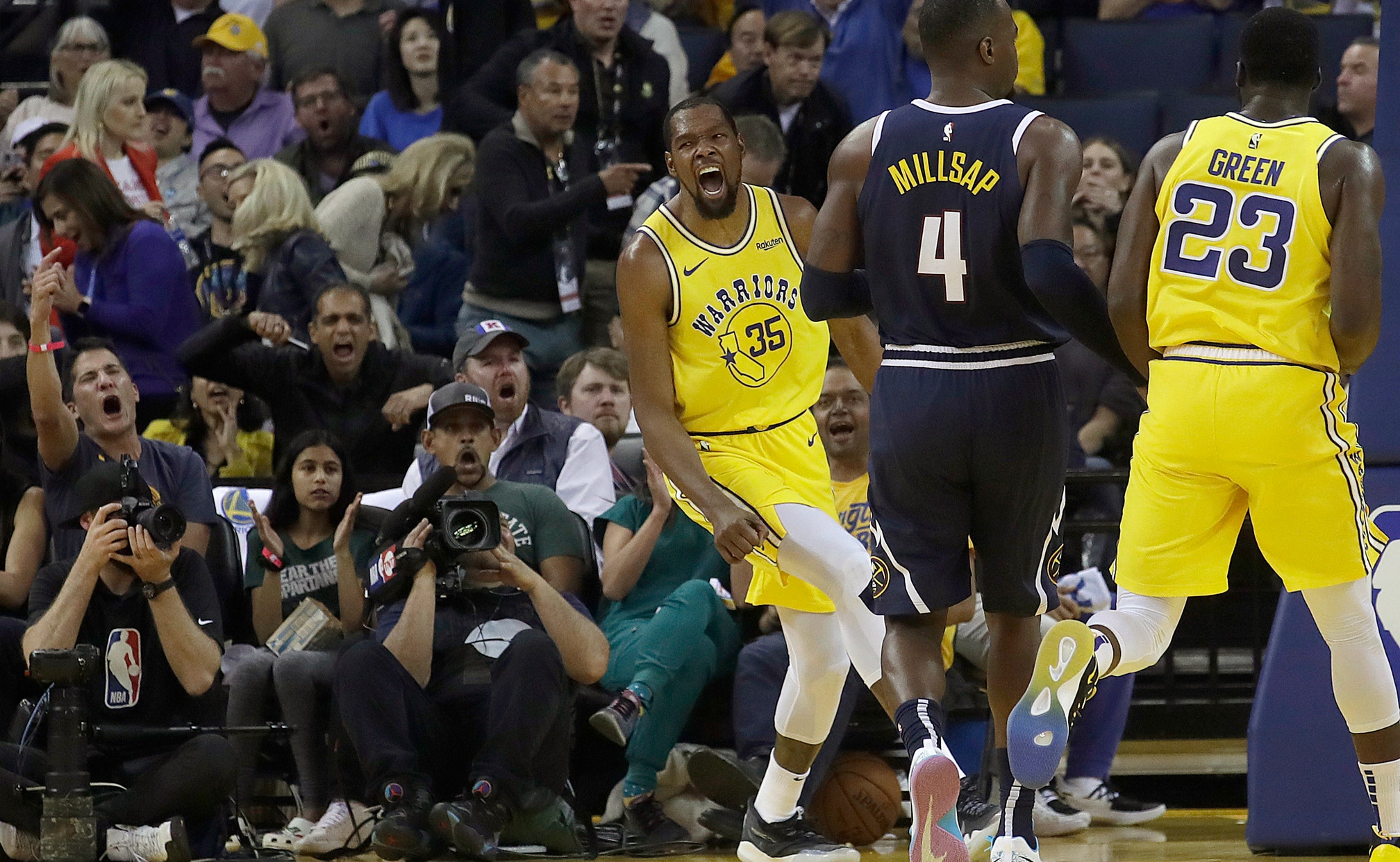 OAKLAND, Calif. (AP) — Kevin Durant's brilliant night on both ends got cut short by an ejection.

Durant emphatically showed who is still No. 1 in the West, delivering a pair of jarring dunks late in the first half and finishing with 21 points and six assists before being tossed to lead the Golden State Warriors past the Denver Nuggets 116-99 on Tuesday night in a matchup of the top teams in the conference.

"The energy in the crowd at that point was incredible. When he attacked like that and hammered those two dunks down you could feel the power in the arena, you could feel our home crowd, you could feel the energy of our players," coach Steve Kerr said. "Those two plays kind of broke the game open and gave us a lot of life. I thought Kevin was tremendous tonight. It's unfortunate he didn't get to play more."

DeMarcus Cousins had a season-best 28 points, on 12-for-17 shooting, 13 rebounds, five assists and two blocks for the Warriors (53-24), who have a two-game lead and the tiebreaker on Denver (51-26) with five games to go in the chase for the Western Conference's top seed and home-court advantage throughout the playoffs. Golden State lost out on the No. 1 spot to Houston last year, but still went on to capture a repeat title.

Durant was ejected with 8:21 left in the third. He became furious wanting a foul call when he airballed a 3-point shot over Paul Millsap, then pointed at and yelled toward official Zach Zarba. Cousins stood between Durant and Zarba, who wasted no time tossing the two-time reigning finals MVP.

Those were his 14th and 15th technicals, meaning he is one away from an automatic suspension. Cousins was ejected against Charlotte on Sunday, when the Warriors clinched their fifth straight Pacific Division crown.

"I think we can be better at keeping our poise, myself included," Kerr said.

Before that, Durant dazzled.

He rebounded Jamal Murray's missed 3 and drove the court, dribbling with his left hand through the paint before switching hands to deliver a powerful one-handed slam. Durant had another moment before halftime, driving the baseline for a two-handed dunk as the Warriors grabbed a 59-43 halftime lead. He also had a pair of blocked shots.

"Kevin attacking the rim got the crowd into it even more," Klay Thompson said. "That was unbelievable. No one was trying to get in the way of that second dunk he had. That was ridiculous."

Stephen Curry added 17 points, five rebounds and five assists. His 3-pointer with 7:22 left gave him five or more 3s in a career-best nine straight games and moved the two-time MVP (16,236) past Chris Mullin (16,235) for fourth place on the Warriors all-time points list.

Murray scored 17 points after he departed the Nuggets' 95-90 home loss Sunday to Washington in the third quarter with a sprained left ankle and didn't return. Murray, who missed six games from Jan. 26-Feb. 4 with an injury to the same ankle, was closely monitored and played nearly 29 minutes.

Millsap had 11 points shooting 4 of 11 for Denver, which lost for the third time in four games and played the first night of a tough back-to-back with San Antonio visiting the Mile High City on Wednesday.

Coach Michael Malone didn't like his team's mistakes right after Durant was tossed.

"When you're playing against a team that's won three of the last four world championships you can't beat yourself and we did that tonight and that's disappointing," Malone said.

Durant and Draymond Green had four assists apiece in the opening quarter as Cousins got hot. The big man stole the ball from Nikola Jokic and took it coast-to-coast for a left-handed layup.

Denver jumped to a 20-16 lead before Golden State's 14-4 burst put the Warriors up 30-24 heading into the second. Denver never recovered.

Curry teased the PR staff regarding the Mullin mark "because I did not know that was on the horizon."

"It kind of caught me off guard but it was a pretty special night, understanding what Chris Mullin was able to do in his career wearing a Warrior uniform representing the organization, the Bay Area," Curry said. "His jersey is in the rafters obviously for a reason. Pretty cool moment. I'll hopefully talk to him or see him at some point and we'll share a good moment."

Nuggets: Host the Spurs on Wednesday.

Warriors: At the Lakers on Thursday.