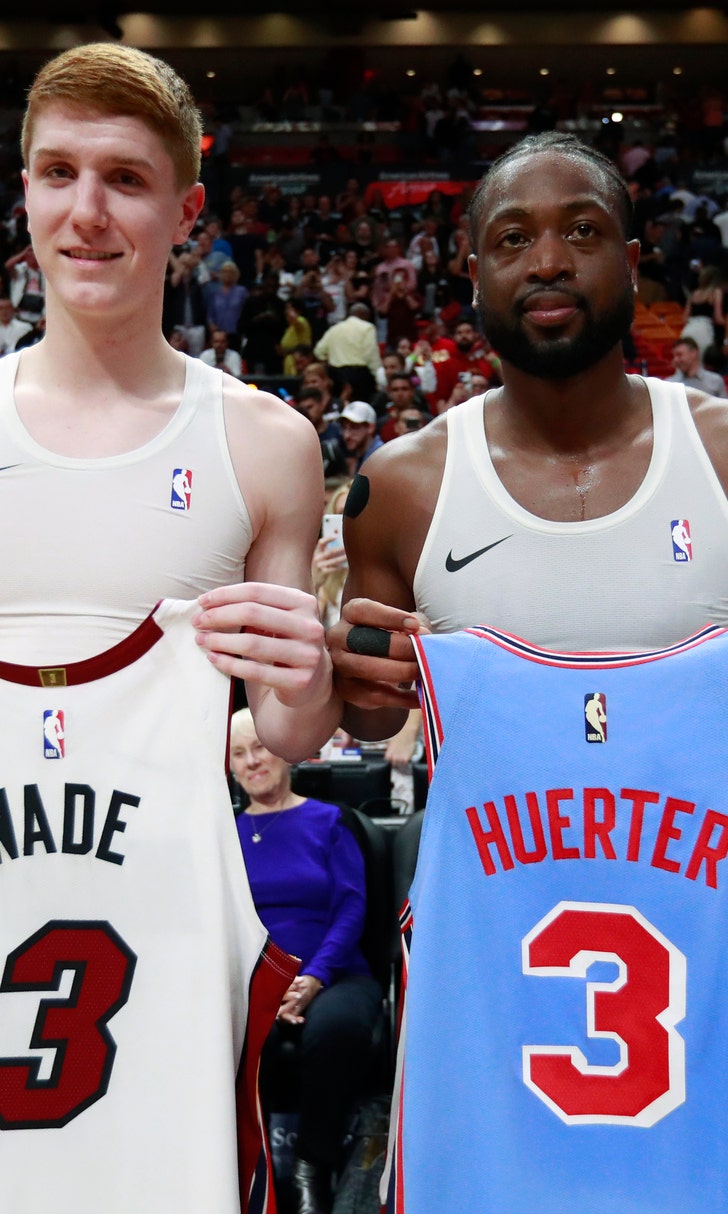 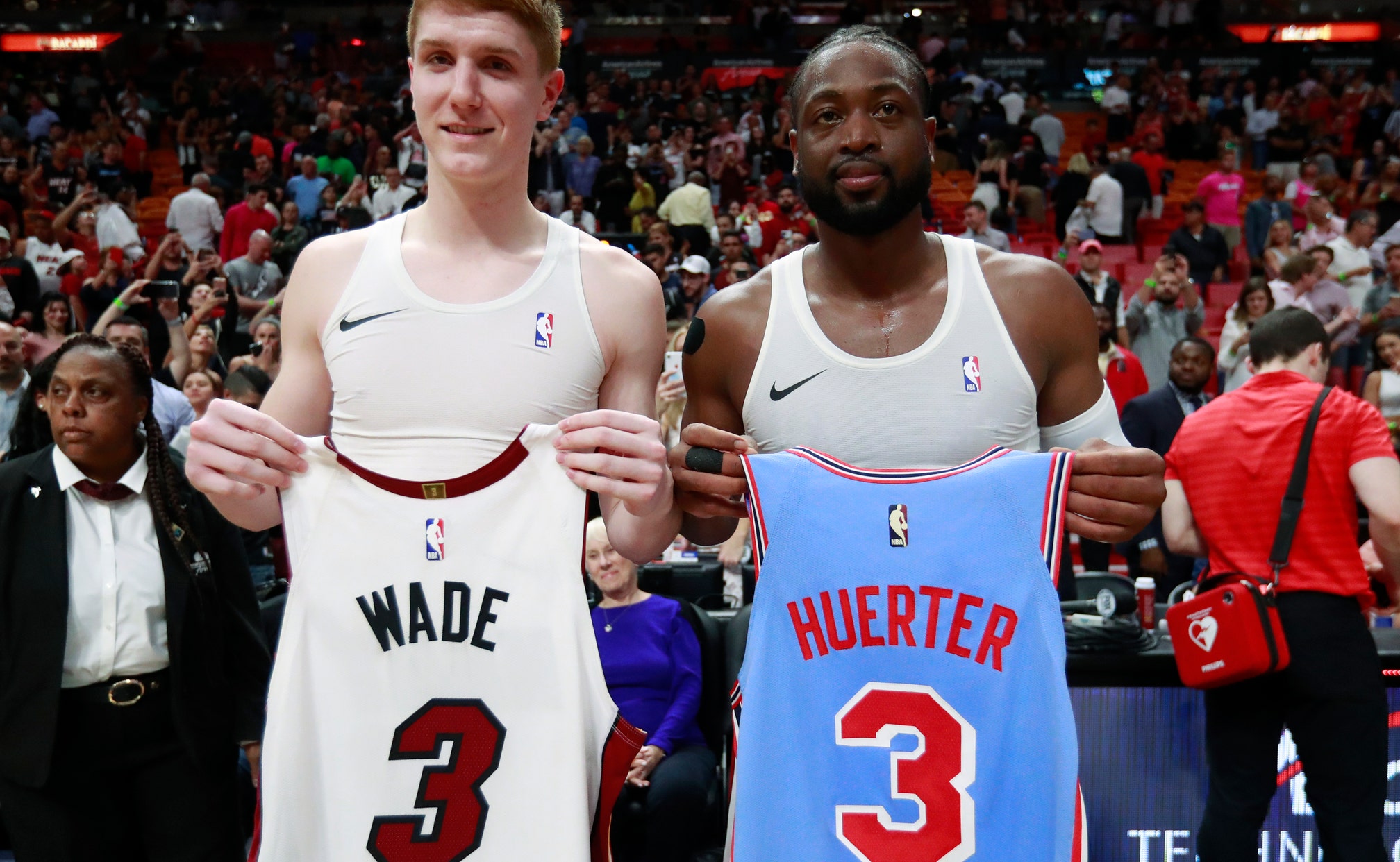 Wade surprises Huerter with a farewell gift _ his jersey

Now, he's got his jersey.

Wade has been exchanging uniform tops with opposing players all season long as part of his "One Last Dance" before he retires — swapping with close friends like LeBron James and Chris Paul, fellow longtime stars such as Dirk Nowitzki and Vince Carter, and the next wave of greats in Paul George and Bradley Beal.

And on Monday night in Miami, Huerter — a rookie guard for Atlanta — got his name added to the list. There they stood, side by side, each wearing the other's No. 3 jersey from Miami's 114-113 win.

"Obviously, us No. 3s got to stick together," Wade said. "But I've been watching this kid grow from the preseason on to now and I like his game. I think his game can go to another level as well. I always want to be someone that a player like that can count on, can reach out to. That was a cool moment for me."

Huerter wasn't expecting the gesture. He was leaving the court and heading to the locker room when Wade motioned for him to come over.

That's when the rookie realized what was happening.

"The look on his face, I understood it meant a lot to him," Wade said.

The jersey exchange with Wade has become a phenomenon this season, with no shortage of players wanting a one-of-a-kind souvenir. Huerter never expected to be part of the club, especially since he's considered Wade one of his idols and one of the reasons why he wears No. 3.

"He's always done it the right way," Huerter said. "You never hear him with off-court type of stuff. He brought championships to this city. He's been with the Heat for the majority of his career. He's been loyal to them. And as a guy coming up, a young guy, starting out with the Hawks, I hope I can continue a long career with them. The league's going to miss him, for sure."

He has been in Wade gear for as long as he can remember.

Huerter is from a basketball family. His father Tom, who turned 50 on Monday and was home in Clifton Park, New York, after a birthday dinner to watch his son swap jerseys with a three-time NBA champion, was part of the Siena team that upset third-seeded Stanford in the 1989 NCAA Tournament. His older brother Thomas plays at Siena now. His younger sisters Meghan and Jillian play for Shenendehowa High, which will be in the New York state quarterfinals this weekend.

About a decade ago, Kevin and Thomas got the same pair of sneakers — Converse, in Heat red and black colors, the model Wade was using at the time.

"For as long as I can remember, me and my brother would wear his shoes when we were younger," Huerter said. "We'd watch his game. He was really one of the first NBA guys I looked up to."

He already knows what to do with the jersey.

"I can't wait to get it framed," Huerter said. 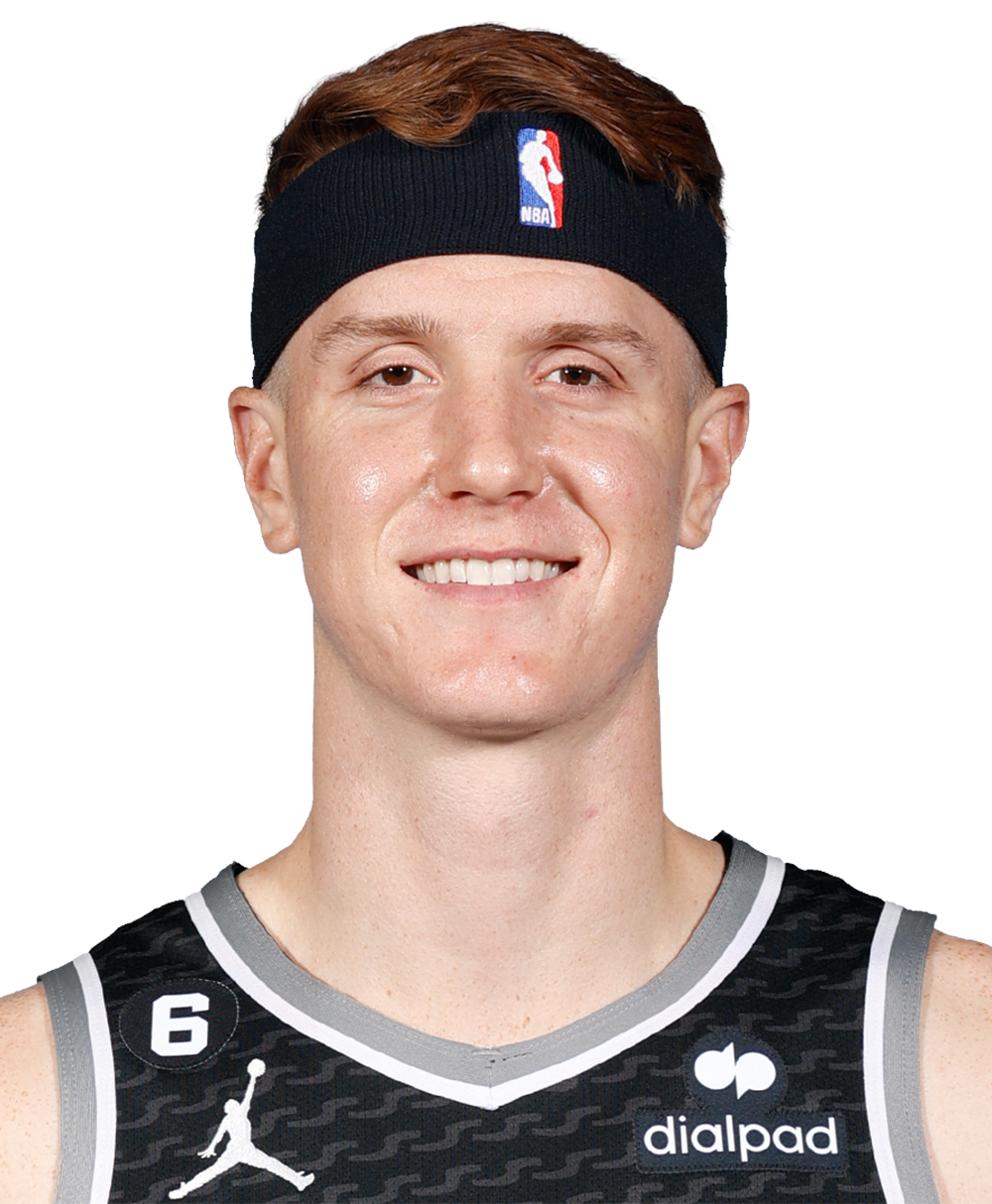