OKLAHOMA CITY — The Thunder flipped the script, and now they're heading to the Western Conference finals.

Oklahoma City lost 124-92 in Game 1, but first-year coach Billy Donovan led the Thunder to victory in four of the next five. Oklahoma City controlled Game 6, leading by as many as 28 points.

"We had that game, and we left it behind us," he said. "We came out after that and had a different mindset. We knew what we had to do to win the series. They're a great team. They've been winning for 10-plus years, same pace. I'm just proud of our guys."

"Golden State's a great team," Donovan said. "It will be a great challenge. We've got a little bit of time to prepare before we play, but right now, for us, it's just to enjoy the opportunity to move on, get a chance to continue to play and get as prepared as we can going into Game 1."

The Spurs were trying to extend the winningest season in franchise history after going 67-15. The 40-year-old Duncan struggled for much of the series before scoring 19 points as San Antonio tried to fight back in the fourth quarter.

Duncan didn't clear anything up about his future after the game. He has a player option for next season.

"I'll get to that after I get out of here and figure life out," he said.

Kawhi Leonard scored 22 points and LaMarcus Aldridge added 18 for the Spurs. San Antonio lost just once at home during the regular season, but the Thunder beat the Spurs twice in San Antonio during the series.

In Game 6, Oklahoma City opened up a 47-29 lead late in the second quarter after a 3-pointer by Westbrook that brought a roar from the crowd. Durant's 3-pointer with 2.3 seconds left in the half pushed the lead to 55-31 at the break. Durant scored 18 points in the first half and Westbrook added 13.

The Thunder looked like the Spurs often do in the first half, running an efficient offense while committing just three turnovers.

It was a season-low point total for the Spurs in a first half. San Antonio shot 31.1 percent from the field before the break and missed all nine of its 3-pointers.

"They did a great job of coming out and punching us in the stomach," Leonard said. "But we got some open looks that didn't go down, turned over the ball a couple of times, and that's all on me."

Oklahoma City kept the pressure on and led 91-65 at the end of the third quarter.

The veteran Spurs had one last surge left and got as close as 11, but a 3-pointer by Westbrook, then a driving layup by Westbrook, killed San Antonio's momentum for good.

"We always give credit to our opponents, and obviously, OKC turned it up there and turned our execution into forced bad shots, and then we kind of trickled down from there and it snowballed," Duncan said. "We put ourselves in the hole. We actually played somewhat solid for the second half but it was too little, too late." 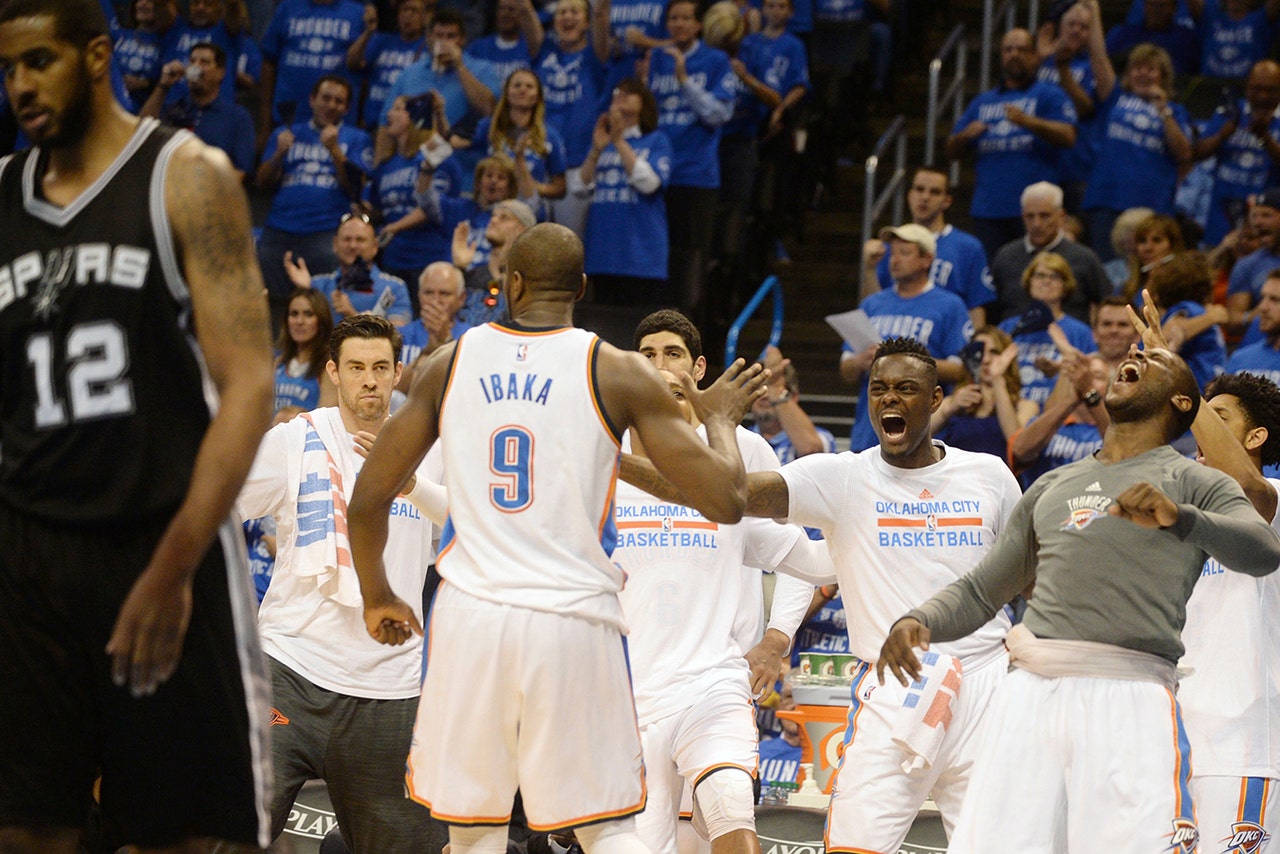 The Thunder dominated the boards in the series, winning the rebounding battle in five of the six games. Oklahoma City outrebounded San Antonio 50-40 on Thursday.

"We knew that they were going to be dominant on the boards and be good down low," Aldridge said. "We just wanted to try to match their intensity."

Roberson was 0 for 7 from 3-point range the first five games, but he made 3 of 5 on Thursday. It was his career high for made 3s, regular season or playoffs

Spurs: Aldridge had eight points and seven rebounds in the first quarter. ... Duncan, who had been quiet in the series, had six points in the first five minutes of the game.

Thunder: The Spurs led 16-10, but the Thunder closed the quarter on a 15-3 run to lead 25-19 at the end of the period. ... Westbrook was called for a flagrant foul on a drive by Danny Green with 3:45 remaining in the fourth quarter. 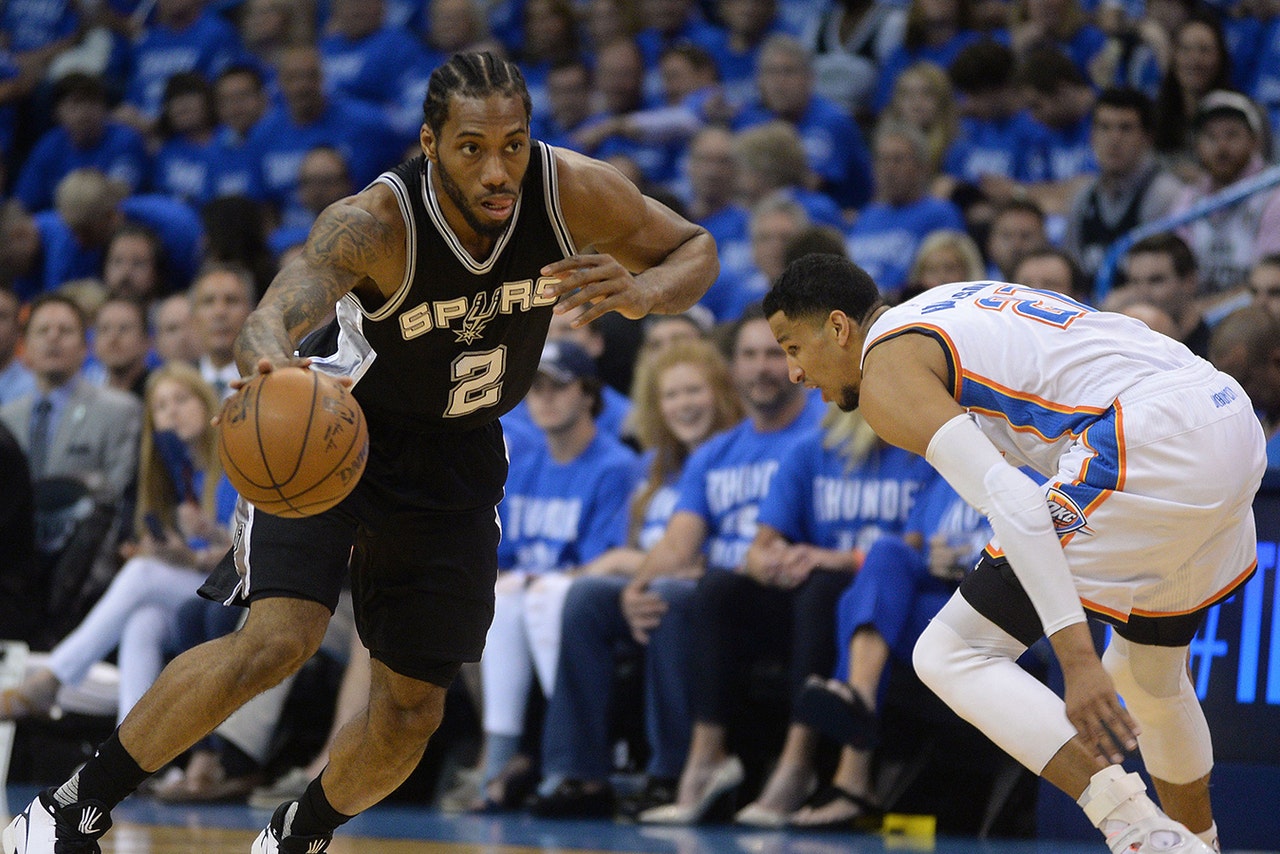