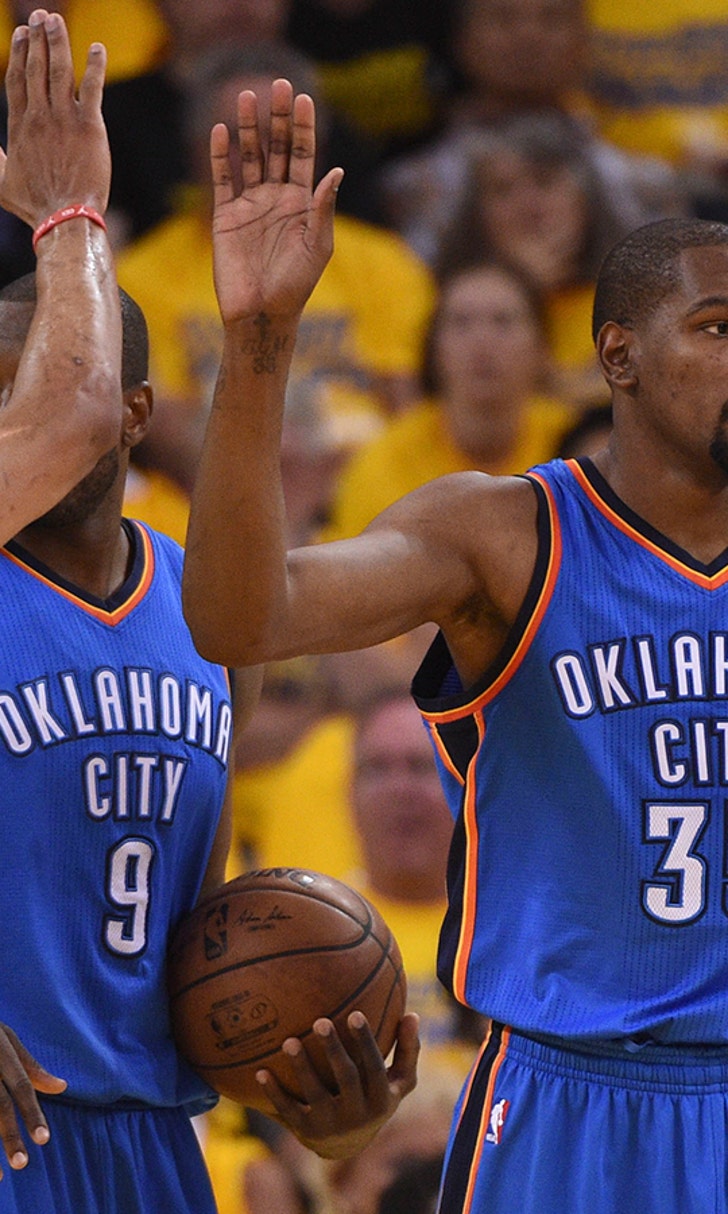 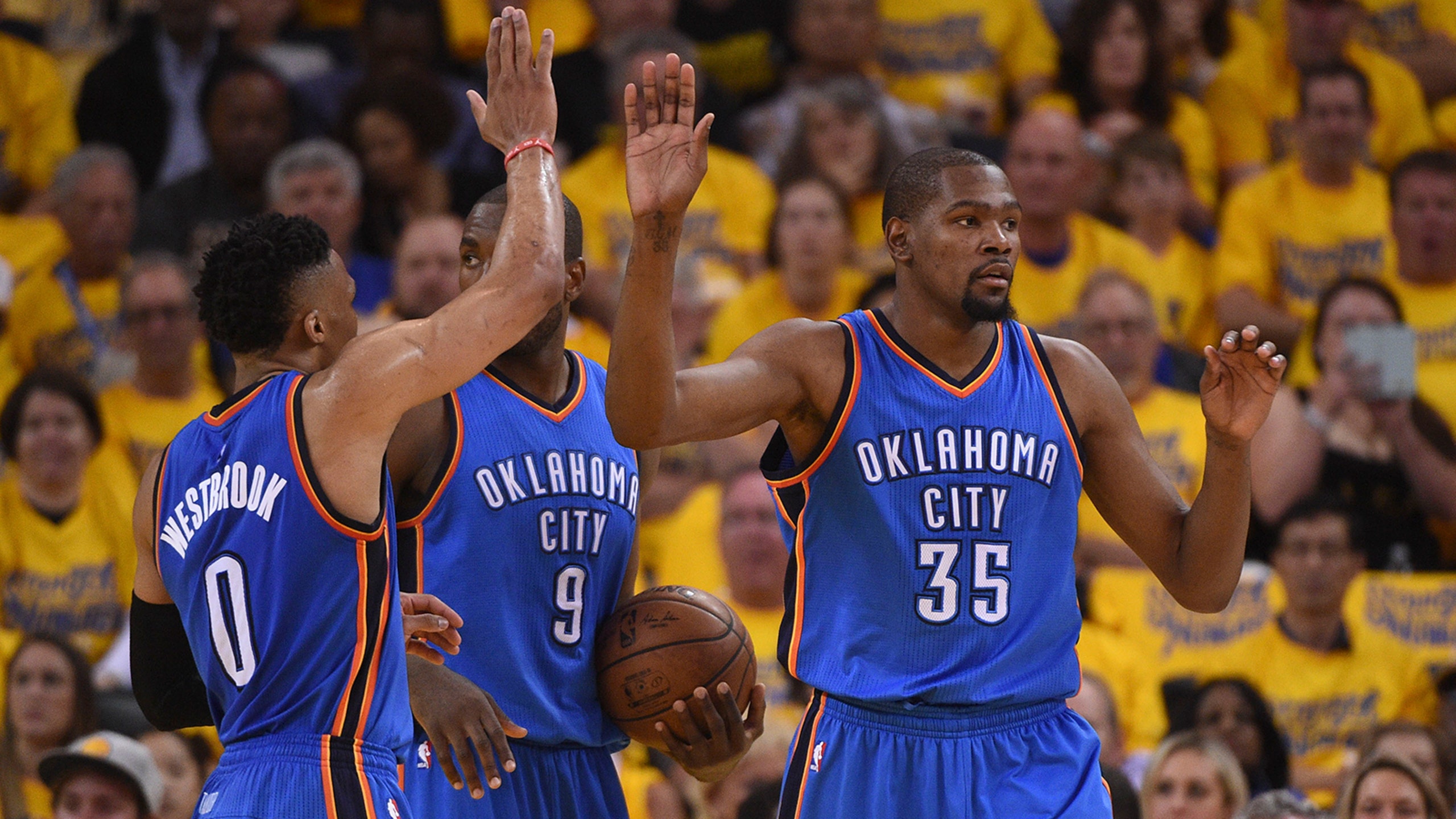 Thunder come from 14 down to take Game 1 from Warriors 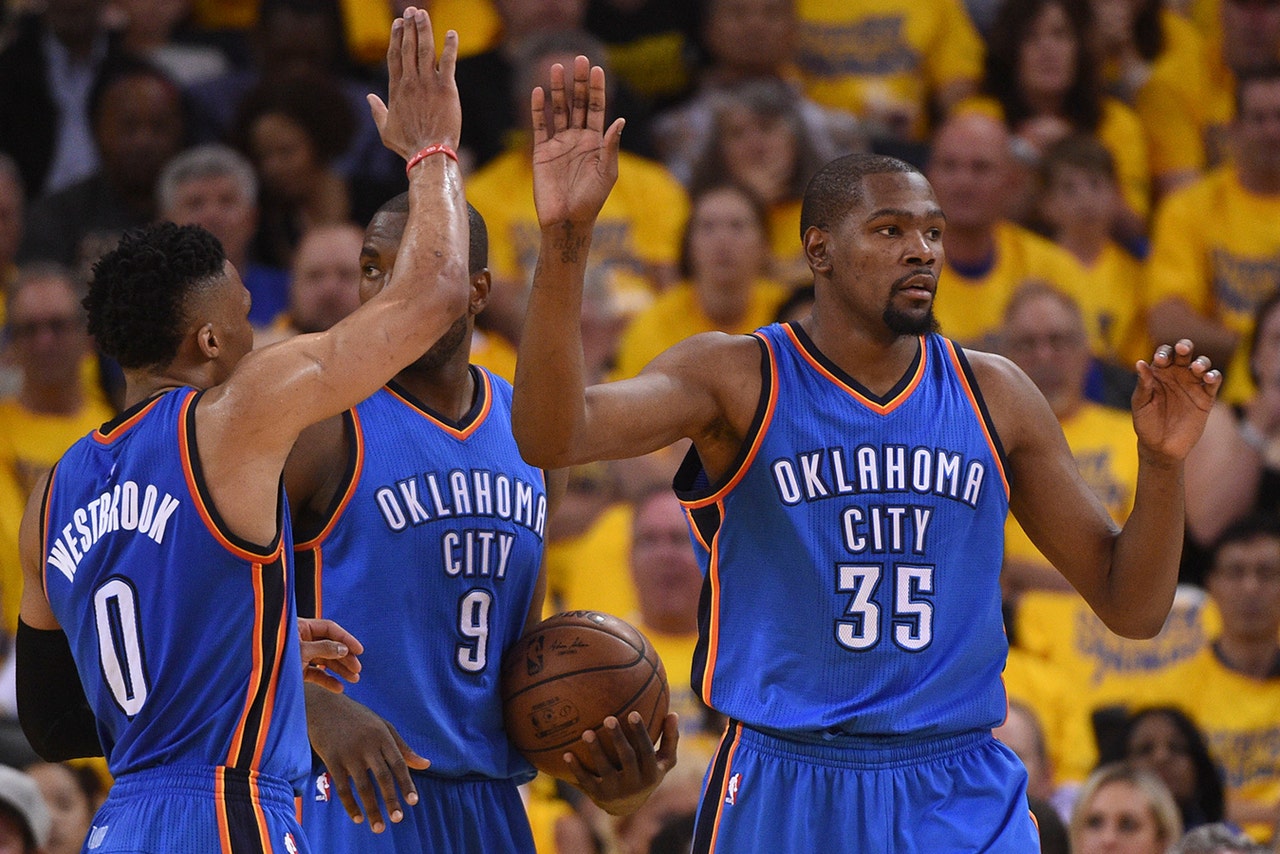 OAKLAND, Calif. -- Outside his locker room, first-year Thunder coach Billy Donovan received a round of hugs and celebratory handshakes for pulling off something no other team has done at Oracle Arena this postseason: win.

Kevin Durant, Russell Westbrook and Oklahoma City dazzled in the fourth quarter the way the defending champion Warriors have done so many times this season on their home floor, rallying from 14 points down for a 108-102 victory in Game 1 of the Western Conference finals Monday night.

Durant scored 26 points and made a key 17-foot jumper with 30.7 seconds left, while Westbrook scored 24 of his 27 points in the second half. Westbrook also had 12 assists and seven steals in the opener of the Thunder's fourth West finals in six years.

Game 2 is Wednesday night at Oracle Arena. If this one was any kind of preview of what is coming, this should be a dandy of a series between the NBA's highest-scoring teams from the regular season.

"We've just got to compete," Westbrook said. "It's going to be a tough game. It's a tough building. They have a lot of great players on their team, but I know we're a great team and when we put our minds to it, tonight we didn't play our best game and we came out with a win."

Steven Adams made a pair of free throws for Oklahoma City with 1:01 remaining, and Klay Thompson missed a reverse lay-in moments later on the other end. Adams finished with 16 points, 12 rebounds and two blocked shots.

MVP Stephen Curry had 26 points and a playoff career-high 10 rebounds, but the Warriors missed too many shots down the stretch. The Warriors' 42 second-half points and 14 in the fourth both were lows this postseason.

"We got rushed and tried to go for the home-run plays. Sometimes it works," Curry said. "Defensively we were getting enough stops and rebounds. We got out of character a little bit. It's something we'll learn from going forward."

With his team down 105-102, Steve Kerr begged for a traveling call on Westbrook at midcourt with 17.2 seconds left, with the NBA Coach of the Year signaling with his arms before going into a squat. Oklahoma City got a timeout instead. Westbrook made one free throw with 14.5 seconds to go.

"I do think we lost our poise a little bit," Kerr said. "And that had a lot to do with the quick shots."

Thompson scored 19 of his 25 points in the first half, but shot 3 for 10 over the last two quarters. Curry's 3-pointer to beat the halftime buzzer gave Golden State a 60-47 lead at the break.

Durant scored to get his team within 88-85 going into the final quarter, and then knocked down a tying 3 just 12 seconds into the fourth. Dion Waiters' layup at 10:30 put the Thunder ahead for the first time since the opening quarter.

Westbrook missed nine of his first 10 shots before finding a groove and scoring 19 points in his team's 38-point third quarter. His jumper with 5:03 left pulled Oklahoma City to 73-68 before Thompson answered two possessions later. Westbrook stole the ball from Green and drove the length of the court for a dunk at the 3:07 mark of the third, and that helped swing momentum.

Durant, Serge Ibaka and Adams each had double-digit rebounds -- a focal point for Golden State after the Warriors won 121-118 in overtime on Curry's long game-winner at Oklahoma City on Feb. 27 despite being outrebounded 62-32.

Westbrook took a hard hit to the face by Andrew Bogut for a foul ruled a Flagrant 1 after a review at the 5:37 mark of the first quarter. Trainers checked Westbrook's mouth.

Curry was 9 for 22 from the field, including a 6-for-14 performance from beyond the arc, and committed seven turnovers to go with seven assists. He hit a 3-pointer in his 45th straight playoff game, breaking Reggie Miller's record set from 1995-2000.

"It's not a good feeling losing Game 1, especially at home," Curry said. "It's fun to have this opportunity to come back, show what we're made of."

This marked the unanimous MVP's second straight start since coming off the bench in Game 4 against the Trail Blazers following a right knee sprain that still isn't 100 percent. He said he can manage just fine, it's just about "pain tolerance" going forward.

It also marked the first playoff matchup between Oklahoma City and the Warriors, though Golden State lost a first-round series 3-1 to the franchise when it was the Seattle SuperSonics in 1992.

Bogut started but didn't score after returning to practice Sunday from a strained muscle in his right leg between the groin and hamstring that he injured in last Wednesday's Game 5 clincher against Portland.

Curry and Thompson were the highest-scoring duo in the NBA, averaging 52.2 points, while Durant and Westbrook were a close second at 51.7.

Thompson has scored 20 or more points in eight straight playoff games, the longest such streak by a Warriors player since Tim Hardaway's 12 games in a row from 1991-92.

Westbrook's 19 third-quarter points were the most Golden State allowed to an opposing player in a quarter this postseason.

Warriors: Thompson made three 3-pointers, ending his streak with at least five 3s at seven playoff games. ... Golden State had its streak of seven straight Game 1 playoff wins snapped with its first such defeat since dropping Game 1 of the Western Conference semifinals to the Spurs in 2013. ... The Warriors dropped to 6-1 at home this postseason. ... Curry passed Paul Arizin (1,145) for third-most playoff points in franchise history.