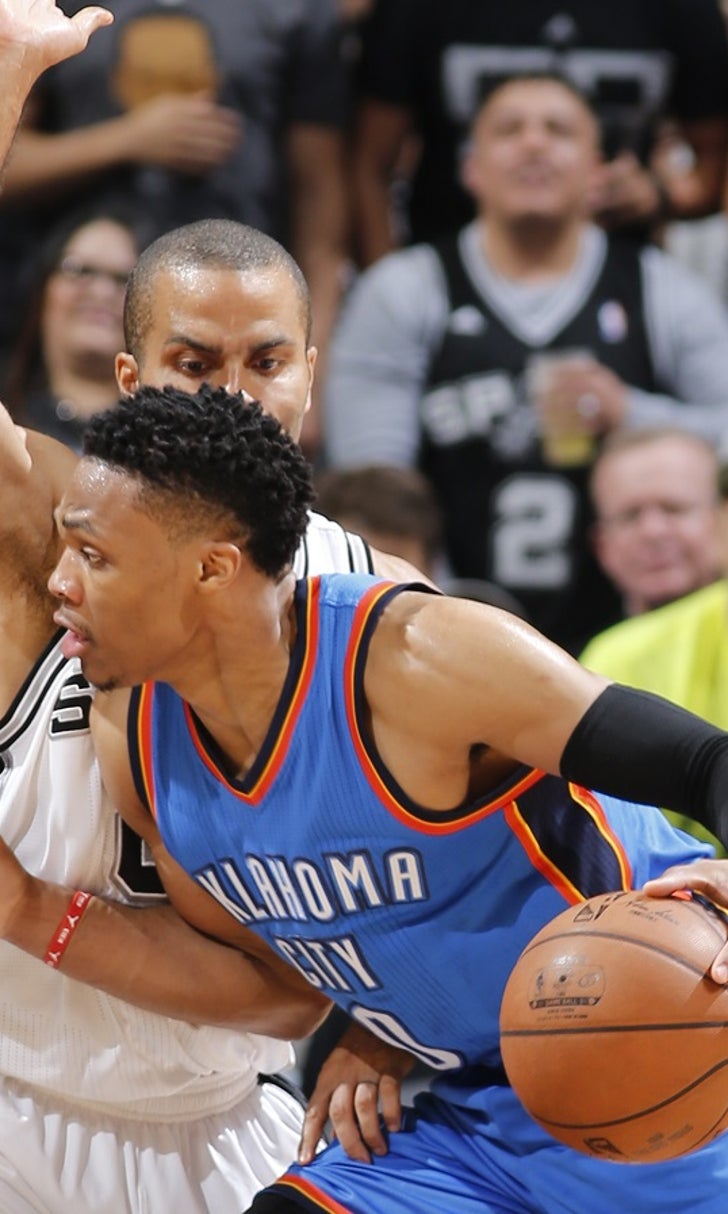 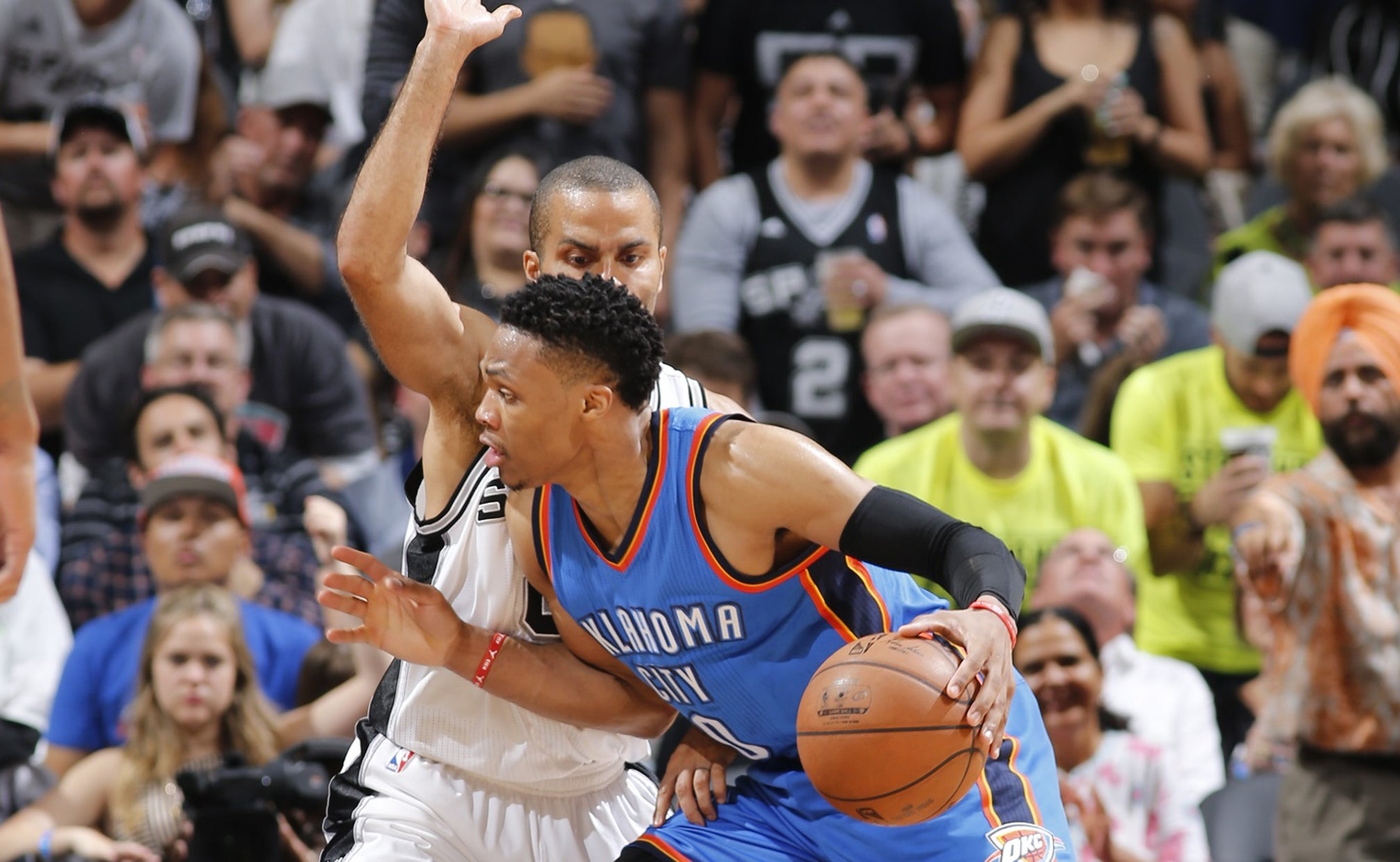 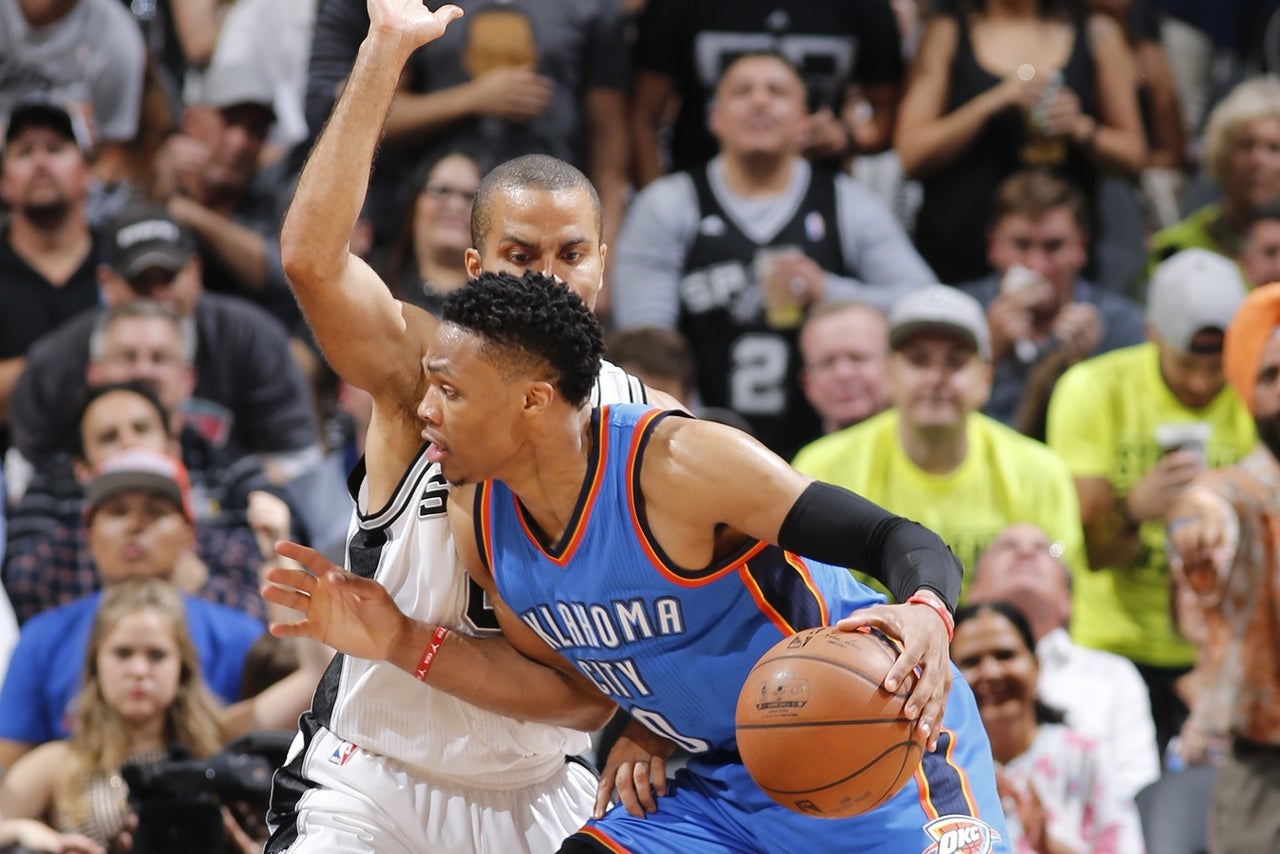 SAN ANTONIO -- Russell Westbrook had 35 points, 11 rebounds and nine assists, and the Oklahoma City Thunder rallied in the fourth quarter to beat the San Antonio Spurs 95-91 on Tuesday night and take a 3-2 lead in the Western Conference semifinals.

Kevin Durant added 23 points as the Thunder won for the second time in San Antonio in the series. Oklahoma City can close out the series Thursday in Game 6 at home.

Westbrook sealed the victory with a three-point play with 6.3 seconds remaining, scoring after the Spurs weren't able to foul him intentionally and he drove for a layup while being fouled.

Kawhi Leonard finished with 26 points for San Antonio, which lost at home once in the regular season and has dropped two straight there now.

The Thunder took a 92-90 lead with 54 seconds remaining on a pair of free throws by Durant after Spurs guard Danny Green fell into his legs when he appeared to be tripped by Steven Adams on an attempted screen.

Tony Parker missed the second of free throws to make it to 92-91. Parker also missed a 12-foot jumper.

Westbrook settled in after an erratic first half in which he committed six of the Thunder's 13 first-half turnovers. He only had two turnovers after halftime.

Westbrook was 12 for 27 from the field in scoring a personal series high.

Besides scoring at least 28 points for the fourth time in the series, the electrifying point guard had four offensive rebounds and two steals in 39 minutes.

The aggressive defense that brought Oklahoma City back into the series after an embarrassing Game 1 loss continued Tuesday night. The Thunder bodied the Spurs on the wings and then collapsed fully when San Antonio attempted to attack the lane.

KD after the win. "We got stops and Russ was a maniac." #KevinDurant #NBACommunityAssist pic.twitter.com/AeAzwbytbJ

Thunder: F Kyle Singler was inactive, sitting out his fourth straight game in the series. Singler played 12 minutes in the opener, missing his only field goal attempt. . Westbrook and Durant have both scored 25 or more points in the same contest in 33 postseason games. Elgin Baylor and Jerry West have the most combined playoff games of 25-plus at 50. Fellow Lakers greats Shaquille O'Neal and Kobe Bryant are tied for second at 33. . F Nick Collison played 50 seconds in the final two minutes of the first half, subbing for Adams before exiting for Randy Foye.

Spurs: Tim Duncan's dunk with 2:58 left in the first half were his first points since a layup 31 seconds into the second half in Game 3. Duncan, who finished with five points, was held scoreless in Game 4 for the first time in 249 postseason games over a 19-year career. His 250 postseason games are nine shy of the record held by former Lakers guard Derek Fisher, and his 157 wins trail only Fisher's 161. . Boris Diaw entered Tuesday's game averaging 5.6 points in the postseason, slightly below his 6.4 average in the regular season. . Popovich became enraged, turning bright red and throwing his fist toward the court after the Spurs failed to get a shot off with 9:19 remaining in the final quarter. The Spurs responded with a steal by Leonard followed by a 3-pointer by Green.