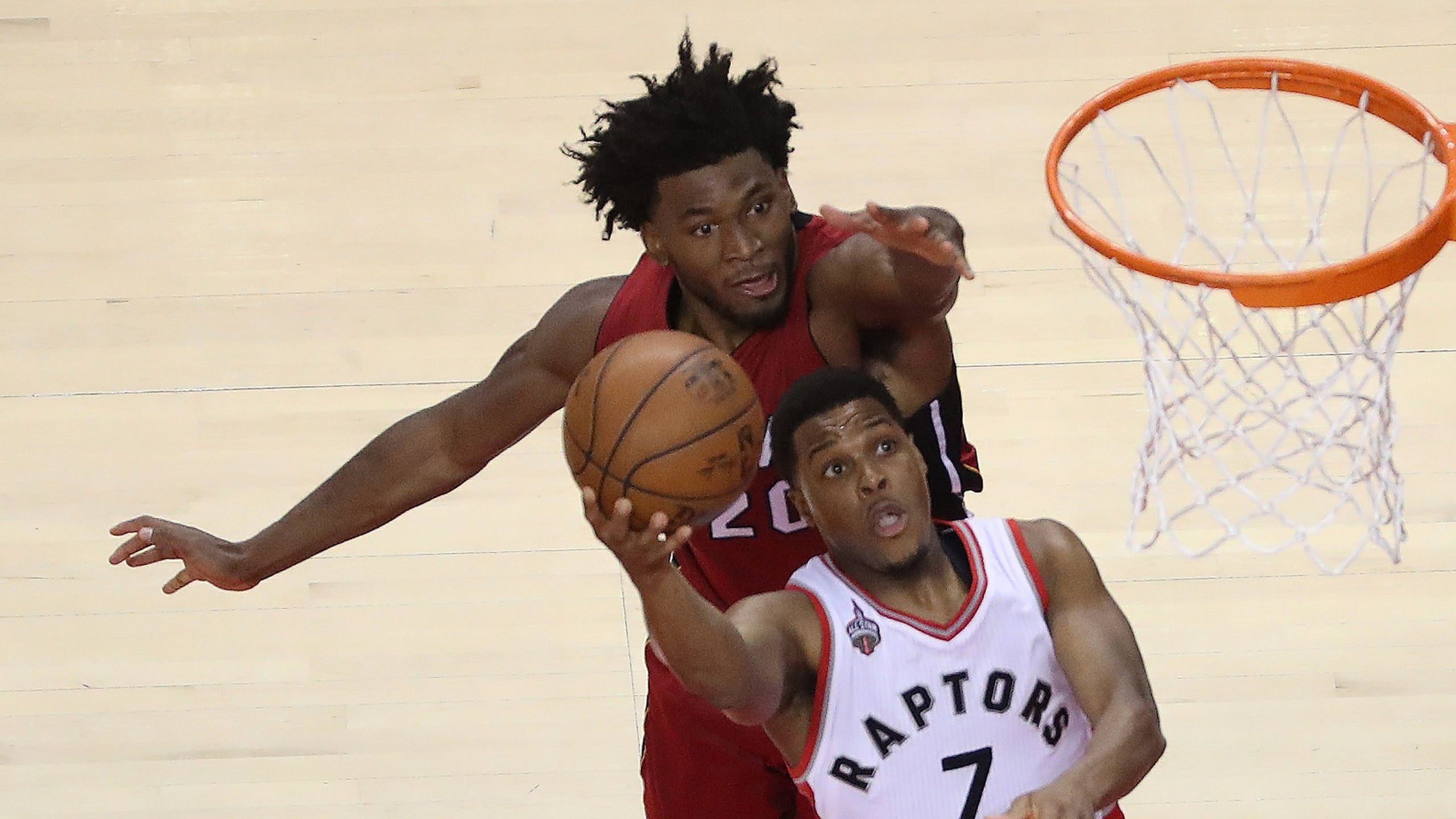 Raptors roll past Heat in Game 7, advance to face Cavs 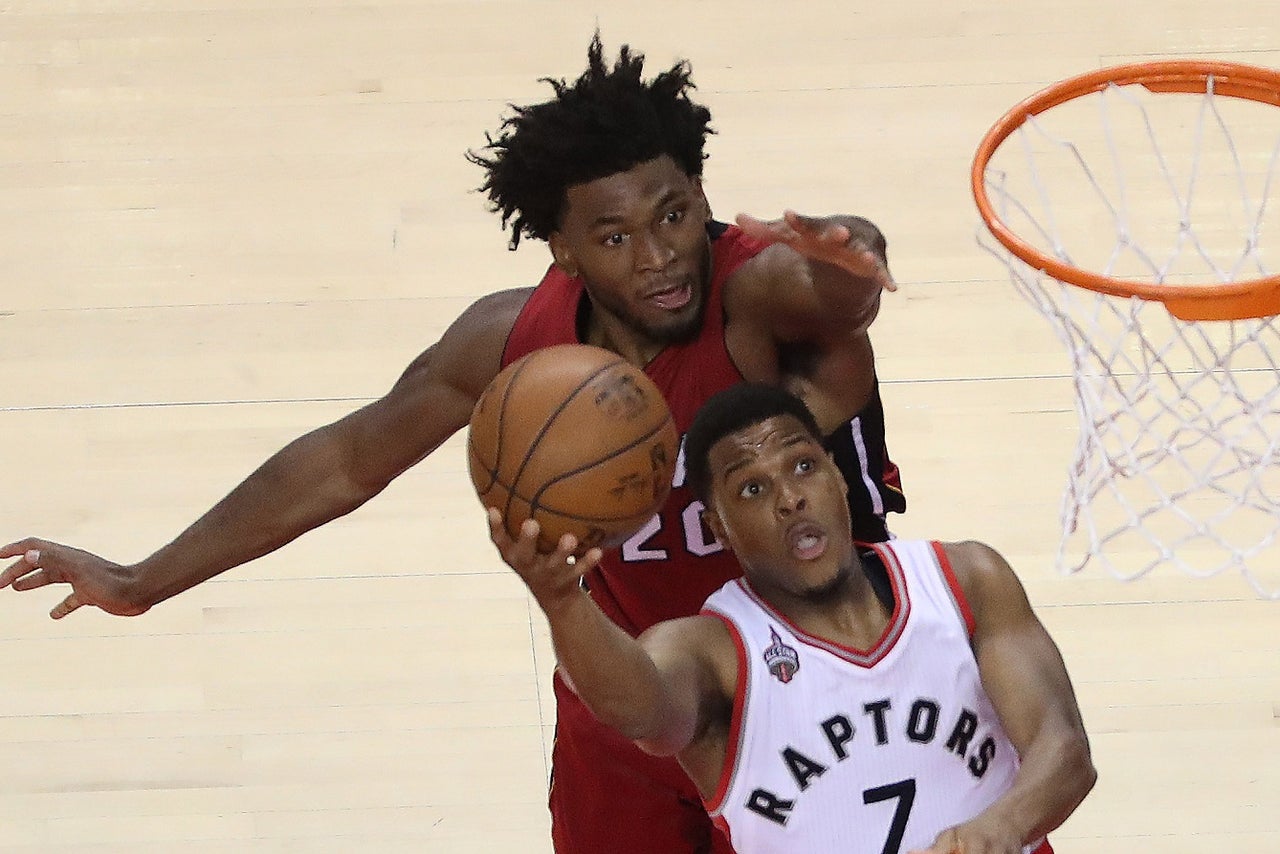 TORONTO -- Toronto fans chanted `We Want Cleveland!' in the final seconds. They got it.

Kyle Lowry scored 35 points, DeMar DeRozan had 28 and the Raptors beat the Miami Heat 116-89 in Game 7 on Sunday to advance to the conference finals for the first time in franchise history.

Bismack Biyombo added 17 points and 16 rebounds for the Raptors. They'll open the Eastern Conference finals in Cleveland against LeBron James and the Cavaliers on Tuesday night.

"It's great to hear the home crowd," DeRozan said. "This organization deserves it, this country deserves it, to see them get to the next step, somewhere they haven't been. But we're not done yet."

After struggling for much of the playoffs, Lowry and DeRozan were in top form for Game 7. Lowry made 11 of 20 shots, including five of seven from 3-point range, and DeRozan connected on 12 of 29 attempts. Lowry had nine assists and seven rebounds, DeRozan had eight rebounds.

35p-9a-7r-4s in tonight's series-clinching win for @klow7. He is your @BioSteelSports Performer of the Game.https://t.co/rUxPkJAlMl

"We never doubted Kyle and DeMar," Raptors coach Dwane Casey said. "They're our All Stars and they both played like it tonight. They both stepped up and carried us."

DeMarre Carroll scored 14 points, and Patrick Patterson had 11 to help the Raptors become the 15th team in NBA history to win two Game 7s in one postseason. Toronto beat Indiana in the first round.

Now the Raptors get ready for the Cavaliers, who swept Detroit in the first round and have been resting since May 8, when they capped a second-round sweep of Atlanta.

"I think this group is hungry," Casey said about his team. "Never say never."

Casey declined to say whether center Jonas Valanciunas, who sprained his right ankle in Game 3 against the Heat, would be available against Cleveland.

Scouting booklets for the Cleveland series were sitting on the chair of each Raptors player inside their locker room less than an hour the game.

"We know we've got a tough task ahead," Lowry said. "It's always a challenge going against those guys."

Dwyane Wade and Goran Dragic each scored 16 points for the Heat. Miami was denied the opportunity to renew acquaintances with former teammate James in the conference finals.

"We fought tooth and nail to try to get to that goal of getting to the Eastern Conference Finals," Wade said. "We came up obviously one game short of that. For myself and a lot of guys on this team, there's not always mother season, another season, so you want to take advantage of the opportunities."

"I had one question for everybody: Are we satisfied?" - @pdpatt on his pregame speech.

Miami hadn't lost a Game 7 since the first round at Atlanta in 2009. They won their past four Game 7s, all at home. Miami was seeking to join the Los Angeles Lakers and Boston Celtics as the only teams to win five straight Game 7s.

Instead, the Heat were left to wonder what might have been after losing Chris Bosh at the All-Star break for the second straight year, then losing center Hassan Whiteside to a sprained right knee in Game 3 against Toronto.

"Hopefully, going forward this organization is not snakebitten like we've been the last two years, losing key players," Wade said.

Joe Johnson and Justise Winslow scored 13 points, and Luol Deng had 12 for the Heat. After rallying to beat Charlotte in the first round, Miami fell short in its bid to become the first team to erase 3-2 deficits in consecutive series.

The Raptors improved to 3-6 when they had a chance to eliminate their opponent, and won for the first time in 14 tries in a playoff game that started before 4 p.m.

Biz was gettin' Bizzy in tonight's Juicy Fruit Sweet Touch of the Game.

Patterson made a layup and, following Lowry's steal on Dragic, added a pair of free throws that gave the Raptors a 102-82 lead at 7:30, all but sealing Miami's fate.

"Their most aggressive, most energetic burst was at the beginning of that fourth quarter and they put it away," Heat coach Erik Spoelstra said. "They wore us down."

The Raptors lost Game 7 of the conference semifinals to Philadelphia in 2001 when Vince Carter's buzzer beater rimmed out. Charlotte, the Los Angeles Clippers, and New Orleans are the only three NBA teams to never reach a conference final. Toronto got there in its 21st season.

Raptors: Toronto hasn't lost back-to-back games since March 23-25. ... The Raptors broke the 100-point barrier for the first time in nine games, snapping a season-worst streak. ... Toronto out rebounded Miami 50-30. The Raptors had 20 offensive rebounds while the Heat had seven.