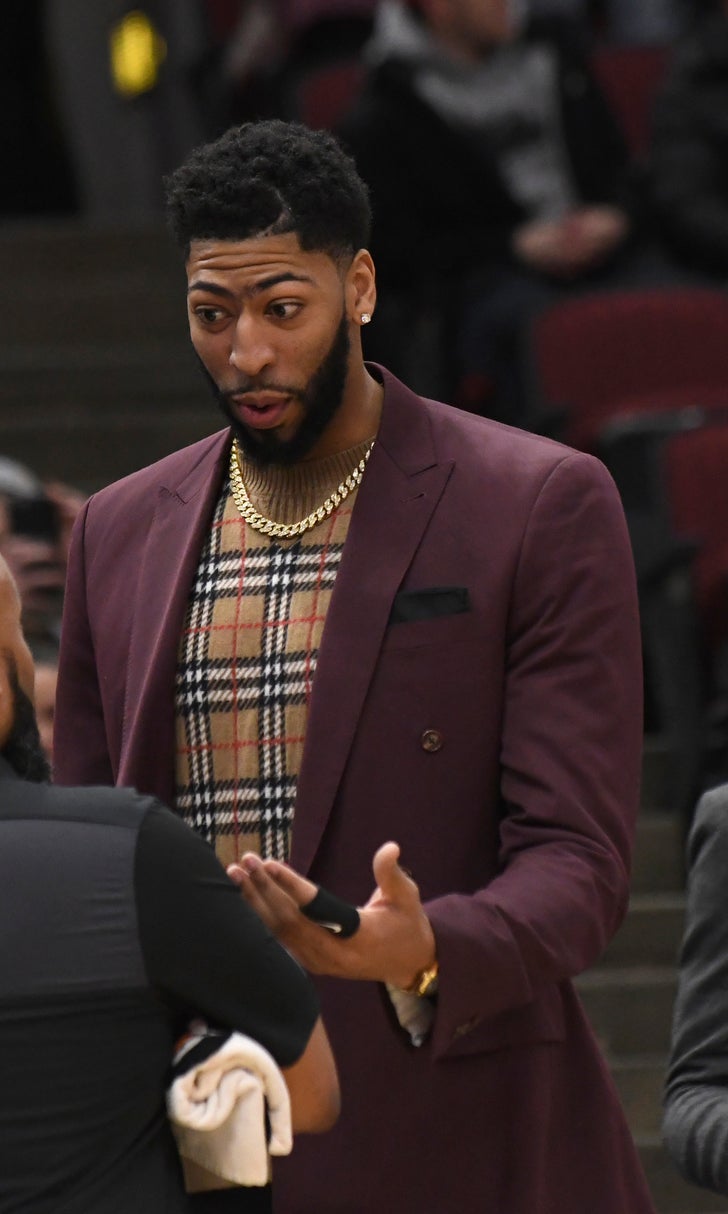 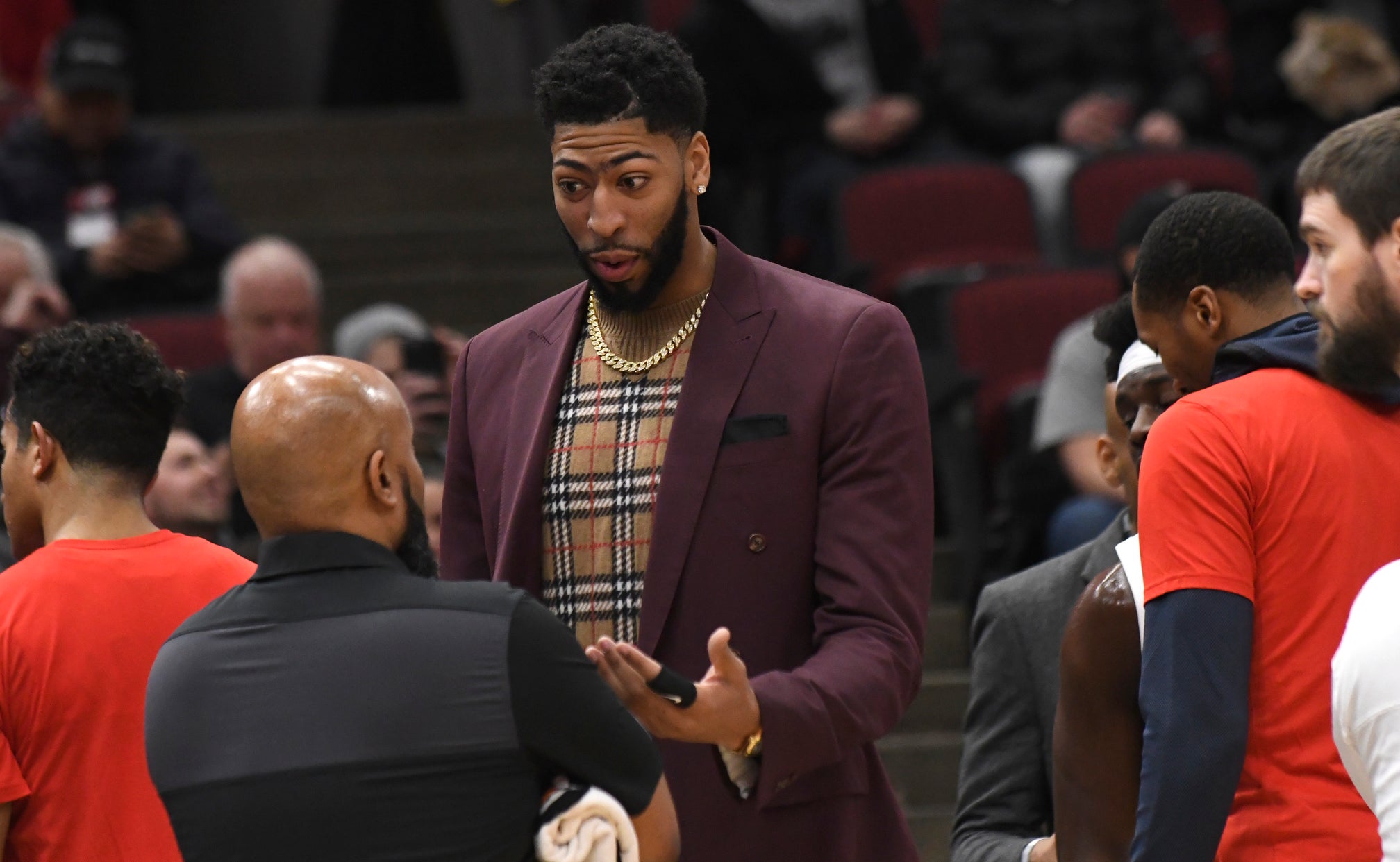 CHICAGO (AP) — Anthony Davis watched near the end of the bench, looking sharp in a maroon sport coat as he waited to see if the New Orleans Pelicans would grant his wish.

The All-Star forward wants to be traded. The Pelicans didn't need him to beat the struggling Chicago Bulls.

Davis was healthy enough to return from a sprained left index finger that has sidelined him since Jan. 18. But the Pelicans opted to hold him out with Thursday's trade deadline approaching.

The six-time All-Star has made it known he wants out of New Orleans. He was even fined $50,000 by the NBA after his agent went public with that request.

Davis' teammates would hate to see him go.

"Selfishly, I would love to be by him every day like I have been this year," fellow Chicago product Jahlil Okafor said. "At the end of the day I want him to be happy. If I'm being selfish, of course I'm going to say I want you to be my teammate."

"Still a professional, still love having him around," Holiday said. "Again, he's like a brother to all of us. Having him here would be a joy."

Randle scored 19 in a blistering fourth quarter and finished six points shy of his season high.

He hit 4 of 6 3-pointers and shot 10 of 18 overall, helping the Pelicans pick up the win after losing six of seven.

The Bulls agreed to trade Jabari Parker and Bobby Portis to Washington for Otto Porter Jr. shortly before tipoff. Then, they lost for the 16th time in 18 games.

"Everybody's gotta step up," Lauri Markkanen said. "I thought the guys that played, they played well. We just adjust. Change is always tough, but next man up. It's not the first time. I can't say too much about it."

"We've got to do the little things," Dunn said. "The little things help us win games, get over the hump, and that's what we have to do. There's some great fans. The journey we've been going through, it's a roller-coaster ride, and they keep showing up to the building. We definitely appreciate that."

Bulls: G Denzel Valentine, who had season-ending surgery on his left ankle in November, said he is able to do some resistance work. ... Chicago scored 65 in its second-highest scoring first half of the season. ... Porter, Parker and Portis will see their former teams when the Wizards visit the Bulls on Saturday. 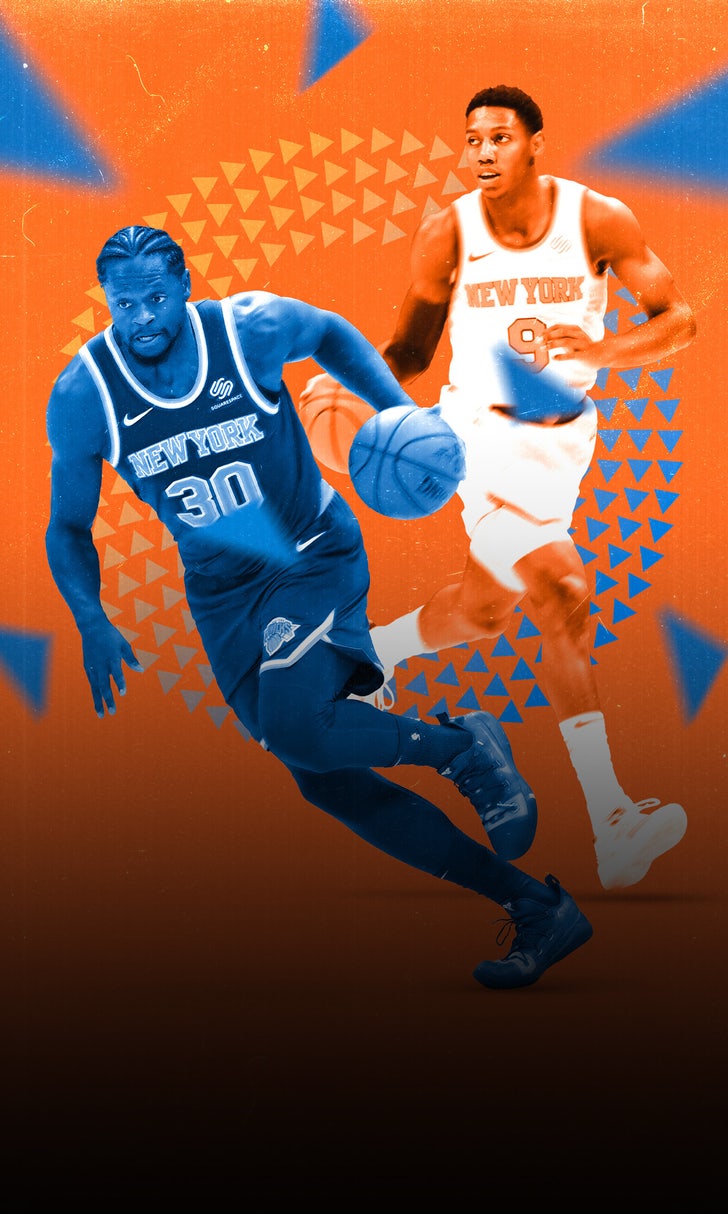 New Hope
Julius Randle and RJ Barrett have given Knicks fans high hopes early this season. Is this New York's year to return to glory?
January 5
those were the latest stories
Want to see more?
View All Stories
Fox Sports™ and © 2021 Fox Media LLC and Fox Sports Interactive Media, LLC. All rights reserved. Use of this website (including any and all parts and components) constitutes your acceptance of these Terms of Use and Updated Privacy Policy. Advertising Choices. Do Not Sell my Personal Info