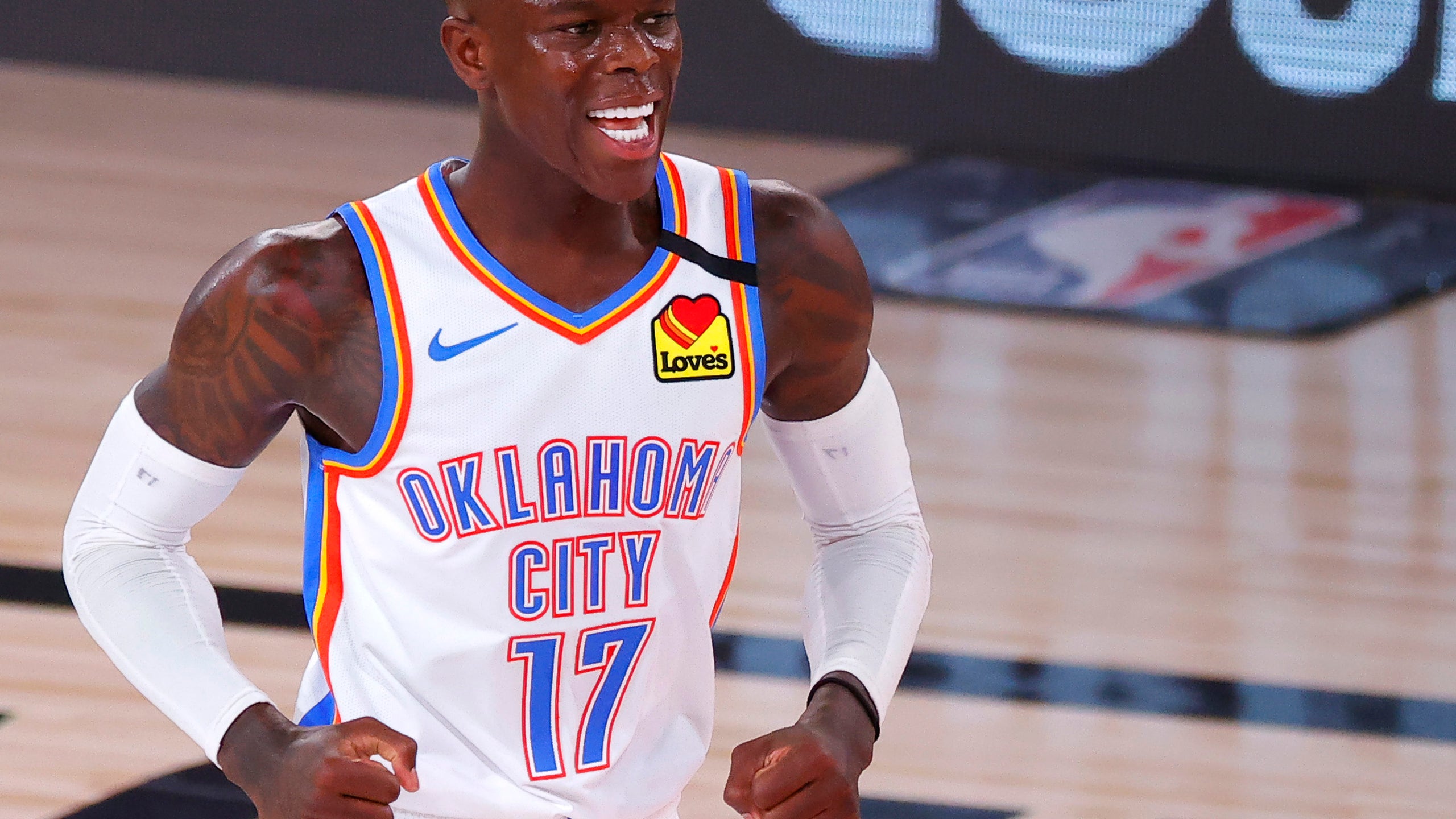 Dennis Schroder, who has made a name for himself as one of the best reserves in the NBA, envisions himself in a new role on the Lakers.

He wants to be the team's starting point guard.

"I did this off the bench stuff already in two years with OKC," Schroder said Monday in his first interview as a Laker. "I think I try to move forward and I think with AD [Anthony Davis] and LeBron [James], I can be helpful as a starter in the PG position and LeBron don’t have [to have] so much stuff in his mind."

James, who turns 36 in December, recently officially added elite "point guard" to his illustrious list of accomplishments, averaging an NBA-best 10.2 assists a game for the Lakers last season, a remarkable responsibility for a player who also averaged 25.3 points a game.

It's a tall task for anyone and has only been exaggerated by the extremely tight month-and-a-half turnaround between the Lakers winning their NBA record-tying 17th championship Oct. 11 and training camp beginning Dec. 1.

The Lakers made it clear they wanted to add playmakers, but it remains to be seen whether coach Frank Vogel shares Schroder's lineup vision.

When asked if that was discussed, Schroder inferred it hadn't been a direct conversation between the two of them.

"I think my agent talked to the organization before they was trading me, so um, that’s that," Schroder said.

Behind Westbrook, Schroder averaged 15.5 points and 4.1 assists in 29.3 minutes, and last season, he led the league in bench scoring with 18.9 points per game, adding 4.0 assists into the mix.

Still, Schroder thinks he can lighten James' load if he starts the game at PG, presumably enabling James to return to the small forward position.

"I can bring it up, call a set play or whatever and put [James] in a position to score," Schroder said. "I think him to play ... off-the-ball, I mean, is I think great. I think that’s the reason why they brought me in. And I think we’re going to fit perfectly with LeBron and AD [Anthony Davis], [Kentavious] Caldwell-Pope is there, Wesley Matthews, [Montrezl] Harrell – I think we all fit together and we’re looking forward to it." The Lakers acquired Schroder in exchange for Danny Green and the No. 28 pick from the Thunder earlier this month. Schroder, whom the Atlanta Hawks selected with the 17th overall pick in the 2013 draft, was in his native Germany when he heard the news.

"In Germany, everybody went crazy when they seen the news to play for this organization," Schroder said. "Like I said, it’s an honor. It’s the biggest platform in the NBA, for NBA teams. For me and Germany, it’s not getting bigger than that. So everybody’s excited, everybody knows we’re competing for something big, and everybody is cheering for me."

Last season, Schroder, 27, averaged 18.9 points, 3.6 rebounds and four assists off the bench for the Thunder, while shooting 46.9 percent from the field and 38.5 percent from beyond the 3-point line.

Schroder thinks he can step in and make a difference on the Lakers right away.

"What I bring is energy and try to make it as simple as possible for my teammates to knock down shots and to make a basketball play," Schroder said. "And I'm here as a leader, but on the court as well to create open shots, to create my own shot and help this team win."

During a game last November, James gave Schroder a hug as he tried to defend him during a free throw.

"It went viral as you guys know," Schroder said. "A pretty good moment."

He knows it's an opportunity of a lifetime.

"It’s an honor to be here in this organization," Schroder said. "I think they brought me in for a reason."