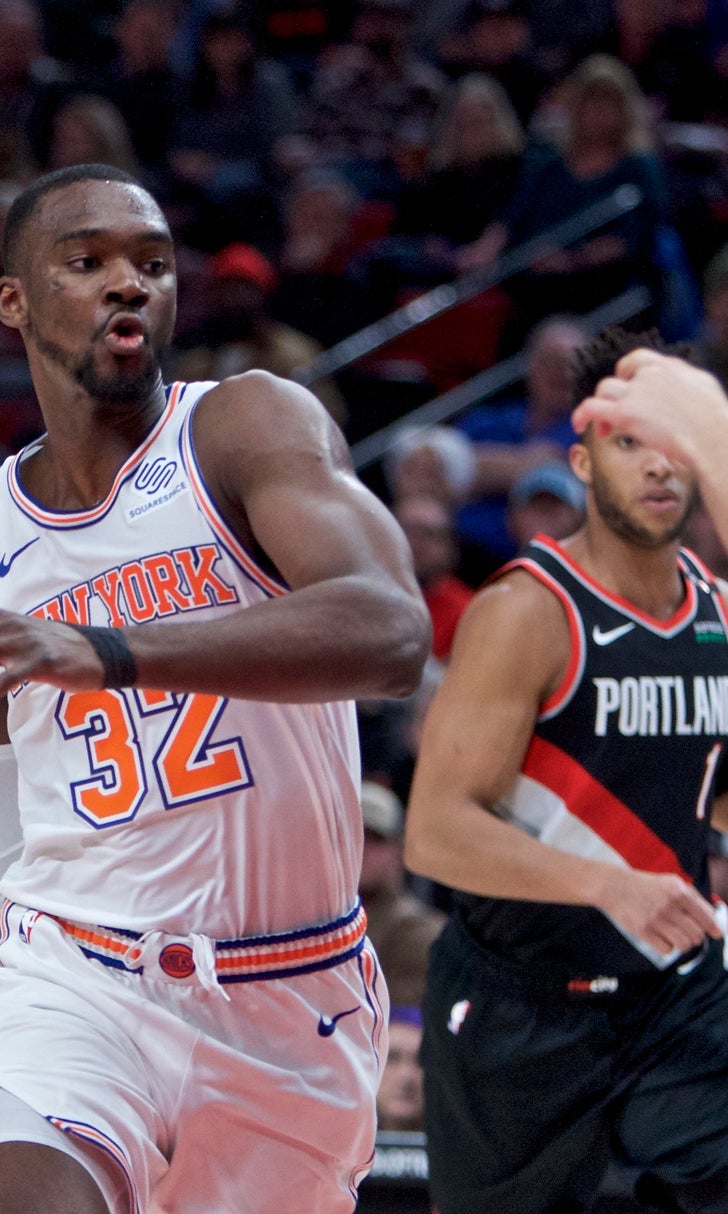 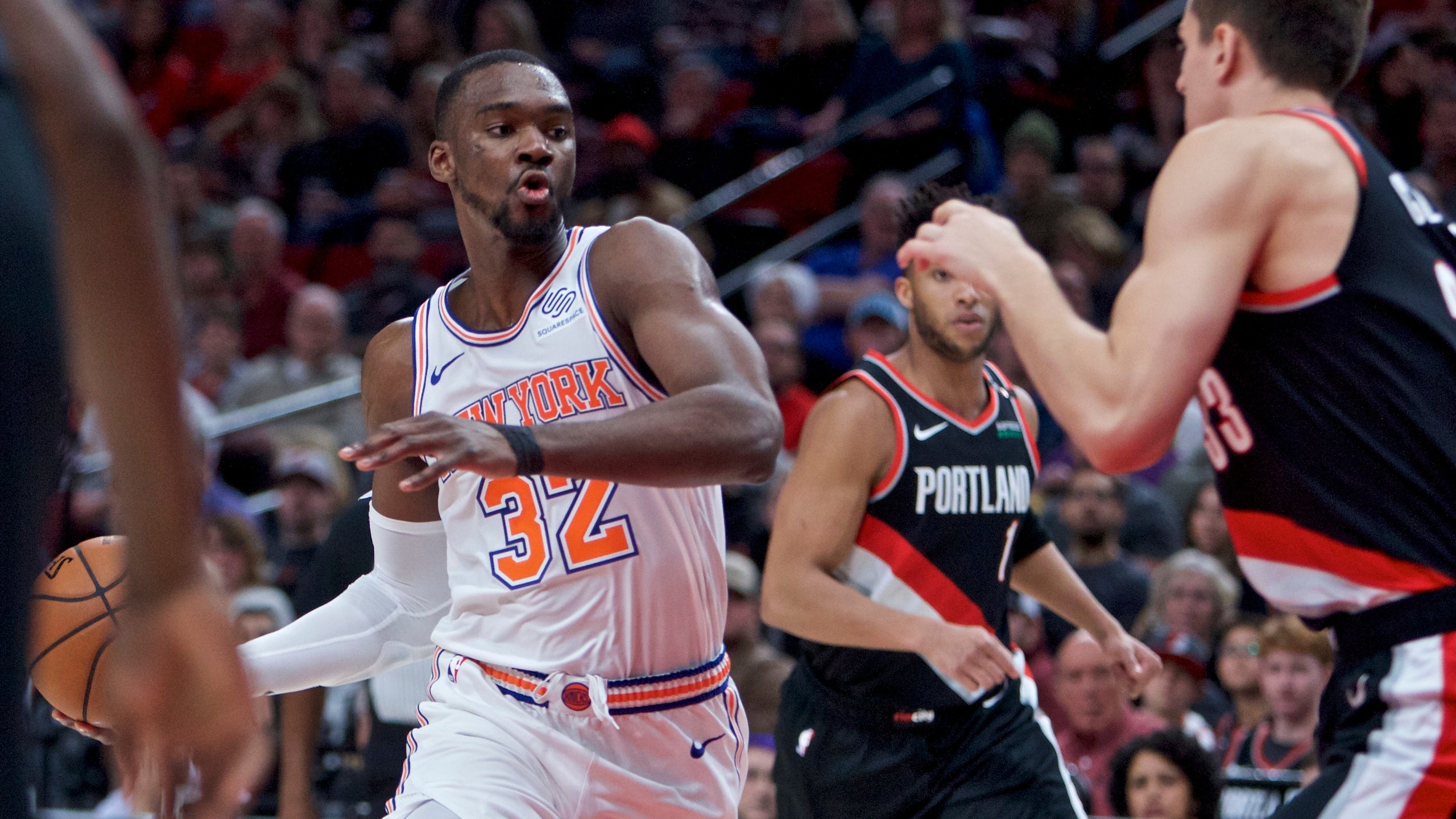 PORTLAND, Ore. (AP) — It really hasn't been any easier for Jusuf Nurkic for the past half-dozen games, even if it appears that way.

Nurkic had 20 points for his fourth straight game with 20 or more and the Portland Trail Blazers beat the New York Knicks 111-101 on Monday night.

The 7-foot Bosnian center has been on a roll lately, averaging 21 points and 11.8 rebounds in the last six games for Portland.

"I work hard for that," Nurkic said when asked about his recent success. "I got in foul trouble tonight, but I keep myself in the game. We won, so it's good."

Damian Lillard added 17 points and nine assists for Portland, which has won four of five. CJ McCollum also had 17 points.

Enes Kanter came off the bench with 18 points and 14 rebounds for his third straight double-double for the Knicks, who have lost nine of 10.

The teams played a lackluster first half, but Portland pulled away in the third quarter, stretching the lead to 18 points at one point.

"Their big guy (Nurkic) is a beast. He's huge. He is a mountain man. You can't move him and the guy is so nimble. He's never really off balance. He sees the floor well and finishes great around the rim with his touch," Knicks coach David Fizdale said. "He's just a really difficult cover and he's just a mountain of a screener so when those guys coming running off of him and he gets contact on you it's just really hard to get around to that screen and they've built some great chemistry together."

Blazer coach Terry Stotts echoed Fizdale's praise, saying it's likely one of the best stretches that Nurkic has had in Portland. Stotts pointed to the rapport he's developed with Lillard on pick and rolls.

"He's slowed his game down to where he's making good reads in those situations," Stotts said. "He's not turning the ball over as much. He's finishing in the paint. He's making his free throws. And that's not to mention what he's been giving us on the defensive end."

The Blazers led 54-53 at halftime. The top scorer at the break was Mario Hezonja, who had 12 points off the bench for the Knicks.

Jake Layman started for Portland in the second half and the team announced that Maurice Harkless wouldn't return because of left knee soreness. Harkless, who had surgery on the knee in March, left without speaking to reporters after the game.

The Blazers started to pull away in the third quarter, jumping to a 65-55 lead. But they were stung when Nurkic collected his fourth foul and had to head for the bench with 6:14 left in the period.

Still, Portland had the momentum and went up 80-67 after Lillard's 3-pointer.

Nurkic finished with eight rebounds, shy of his 21st double-double of the season.

"I always feel confident, even before," Nurkic said. "But you never know, sometimes shots are going to go in, sometimes then go out."

There was drama earlier in the day when former NBA player Hedo Turkoglu posted a statement to Twitter challenging Kanter's concerns about safety for a game in London on Jan. 17. Kanter, who is Turkish, has said he won't go because he fears retribution for his criticism of the leadership in his native country.

Turkoglu, an adviser to the Turkish President Recep Tayyip Erdogan, suggested the reason Kanter could not travel was because he did not have the proper documents, accusing him of a "political smear campaign." In response, Kanter posted his travel documents and wrote: "I CAN go to London. Either you are delusional, or still Erdogan's lap dog."

Knicks: The Knicks were coming off a 119-112 victory over the Los Angeles Lakers on Friday, which snapped an eight-game losing streak. ... Courtney Lee hasn't played for the last three games. Lee told the New York Daily News he understands the Knicks are focusing on the younger players. The Knicks have been looking to trade Lee.

Trail Blazers: The Blazers improved to 24-17 at the official halfway point of the season. It is their best record at this point since the 2014-15 season when they were 30-11. ... Layman had 10 points and a career-high 10 rebounds. It was the first double-double of his career.

QUOTABLE: "I like the fact that we've had a little bit of ups and downs already. We've experienced some adversity early in the season and we got through it. We got to the midway point feeling good about ourselves." -- Damian Lillard.

The Knicks play at Golden State on Tuesday night.

The Trail Blazers host the Chicago Bulls on Wednesday night.

Portland Trail Blazers
share story
those were the latest stories
Want to see more?
View All Stories
Fox Sports™ and © 2021 Fox Media LLC and Fox Sports Interactive Media, LLC. All rights reserved. Use of this website (including any and all parts and components) constitutes your acceptance of these Terms of Use and Updated Privacy Policy. Advertising Choices. Do Not Sell my Personal Info