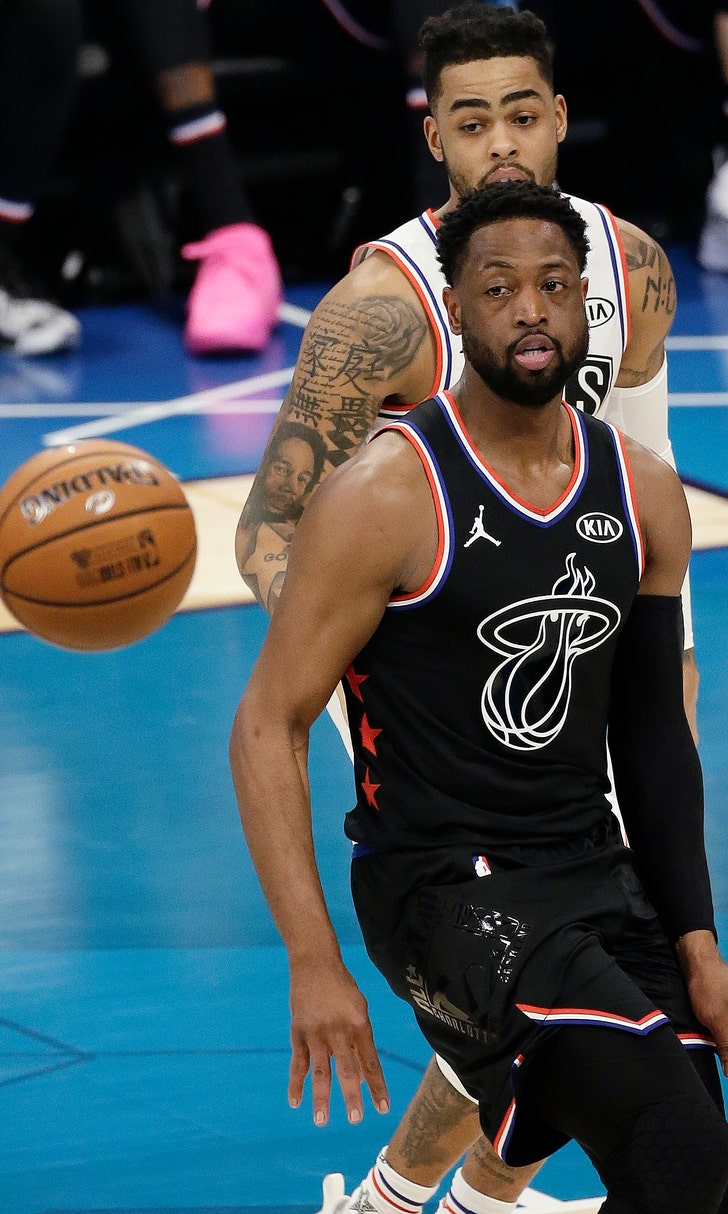 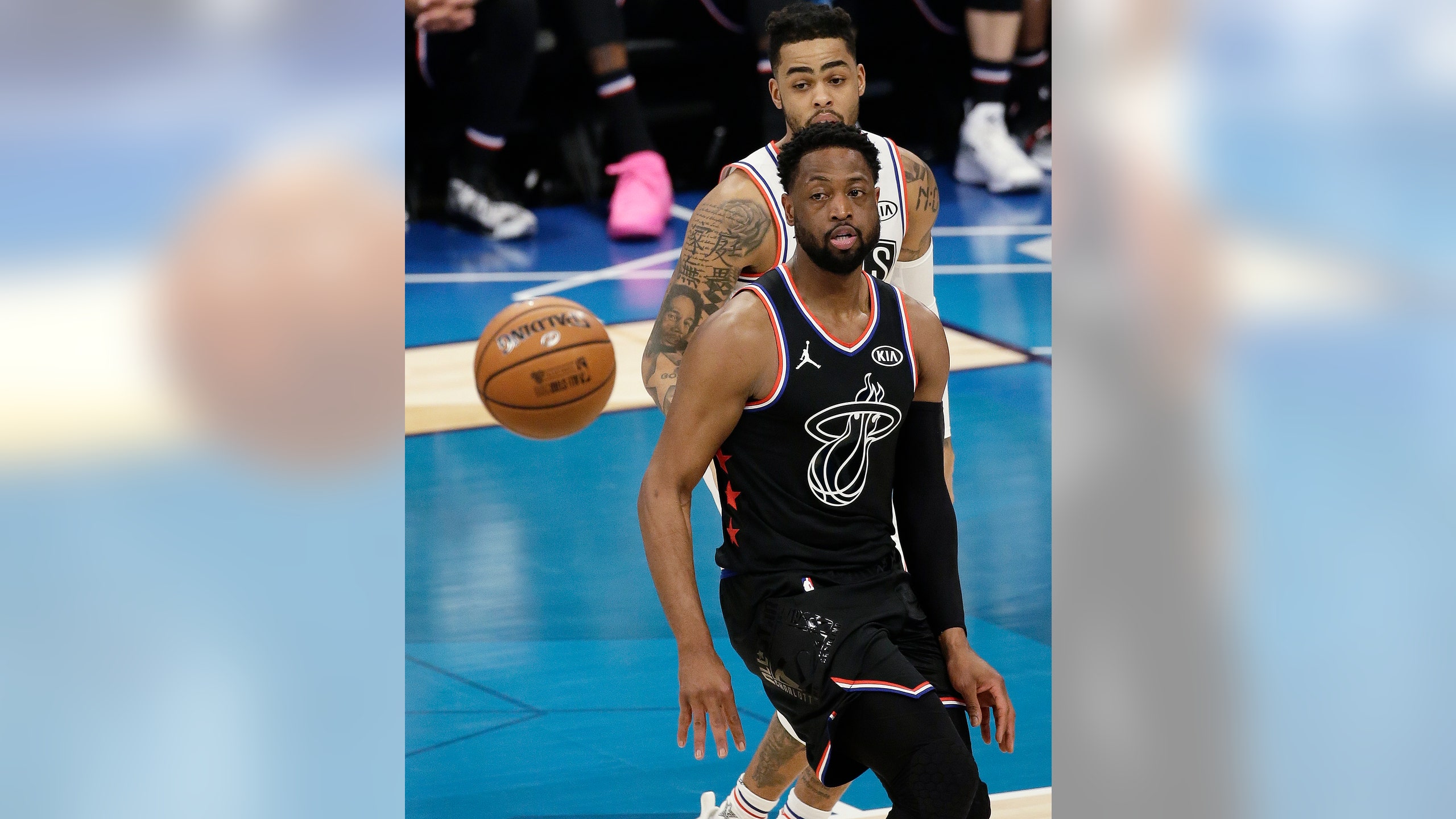 CHARLOTTE, N.C. (AP) — Dwyane Wade is adamant that the end of this season will be the right time for him to bid farewell to the game of basketball.

The game of basketball spent the weekend disagreeing with him.

Wade's final All-Star appearance as a player is now complete, a four-day trip that had testimonials, celebrations, moments with his family, countless photos and chats with some of basketball's royalty, and one more lob to LeBron James for good measure. He scored seven points in his final NBA All-Star Game, helping Team LeBron get a 178-164 victory over Team Giannis.

The score and the stats from the weekend will be forgotten.

The moments won't be, at least not anytime soon. And with 26 games left in the Heat season, the NBA is not ready to say goodbye.

"He's been one of the guys who's been a leader in our league, an ambassador worldwide as well as a champion," said Los Angeles Lakers President Magic Johnson, one of many who lauded Wade at a dinner to start the weekend. "D-Wade embraced being the face of the league for a long time. ... I think the league has done well by him this season, with every arena honoring him, but also we're going to miss him."

So this weekend was about the past, present and future.

A few hours after landing in Charlotte, Wade thought he was headed to a dinner with some family and close friends. When he arrived with his wife Gabrielle Union and their new daughter Kaavia James, he quickly realized that he'd been misled by his inner circle — and dinner for a few was becoming dinner for a few hundred instead.

It turned out to be a five-hour party, replete with a red carpet arrival, him seated on a throne and simultaneously drinking from two glasses of red wine at one point, laughs, hugs, tears and capped by karaoke — one of his off-court obsessions. Speakers included Caron Butler, Donovan Mitchell, Isiah Thomas, Tim Hardaway, his parents Jolinda Wade and Dwyane Wade Sr., Charles Barkley, Chris Paul, Carmelo Anthony and Heat President Pat Riley.

They all told different stories with the same theme: Wade has meant so much, to so many, for so long.

"No one — when I say no one, I mean no one — has done the things at a professional level out of Chicago on a basketball stage better than Dwyane Wade," said Thomas, who like Wade is a proud son of the Windy City.

Riley spoke longer than anyone, nearly 20 minutes, and when he got done he tried to play off Wade's "One Last Dance" theme for his final season by having the sounds of Donna Summer's "Last Dance" blare through the room where revelers dined on filet mignon and sea bass.

The music played. Wade and Riley hugged. Riley kissed the most important draftee of his career on the cheek.

Wade even savored the regular All-Star machinations — interviews, practice, appearances. Fans screamed for him and clamored for him to sign anything and everything when he walked into media day on Saturday, and he couldn't go anywhere without someone asking for a photo or autograph.

"To be here, for me to be able to choose him to be part of Team LeBron, for him to be here this weekend, it's a bittersweet moment, obviously," said James, Wade's championship-winning teammate in Miami and later a teammate again in Cleveland. "The bitter part of it, that this is his last weekend being in All-Star Weekend and knowing that his journey is coming to an end as far as a basketball player. But the sweet moment is that we've got so much more life to live together, and we will continue that."

The biggest thrill Wade got of his celebration weekend, however, had nothing to do with his own play.

His kid was a star on the All-Star stage.

From throwing lobs with his dad and James at practice Saturday, getting an on-court tutorial from reigning NBA MVP James Harden, posing for photos himself, even being on the court for warmups at the All-Star Game and slapping fives with Blake Griffin among others, Zaire Wade — a budding star — soaked up everything he could all weekend.

That was precisely what his father wanted.

"Having Zaire by my side every step of this road is something that I really wanted to do," Wade said. "But I couldn't imagine it'd be this cool. He was trending worldwide. That's, like, insane."

Wade's last regular season with the Heat ends April 10. After that, the Heat hope, there's a playoff run. And then he's done, sans for one final game — a 1-on-1 matchup against Zaire, the high school junior who has multiple Division I offers already and will likely draw more this summer before he commits to a college this fall.

Zaire has never beaten his dad.

Time will tell on that.

But first, there's the season to finish. Wade will take a couple of days off before practice resumes Wednesday, ready for some sun and some golf. When the playoff push resumes Thursday in Philadelphia — and Miami has some work to do in the Eastern Conference race — Wade insists he will be ready.

"My mind will be right," Wade said.

Whatever happens, though, the legacy is clearly secure.

"There will never be another D-Wade," Johnson said. "And that stretches further than Miami. That's all over the world."