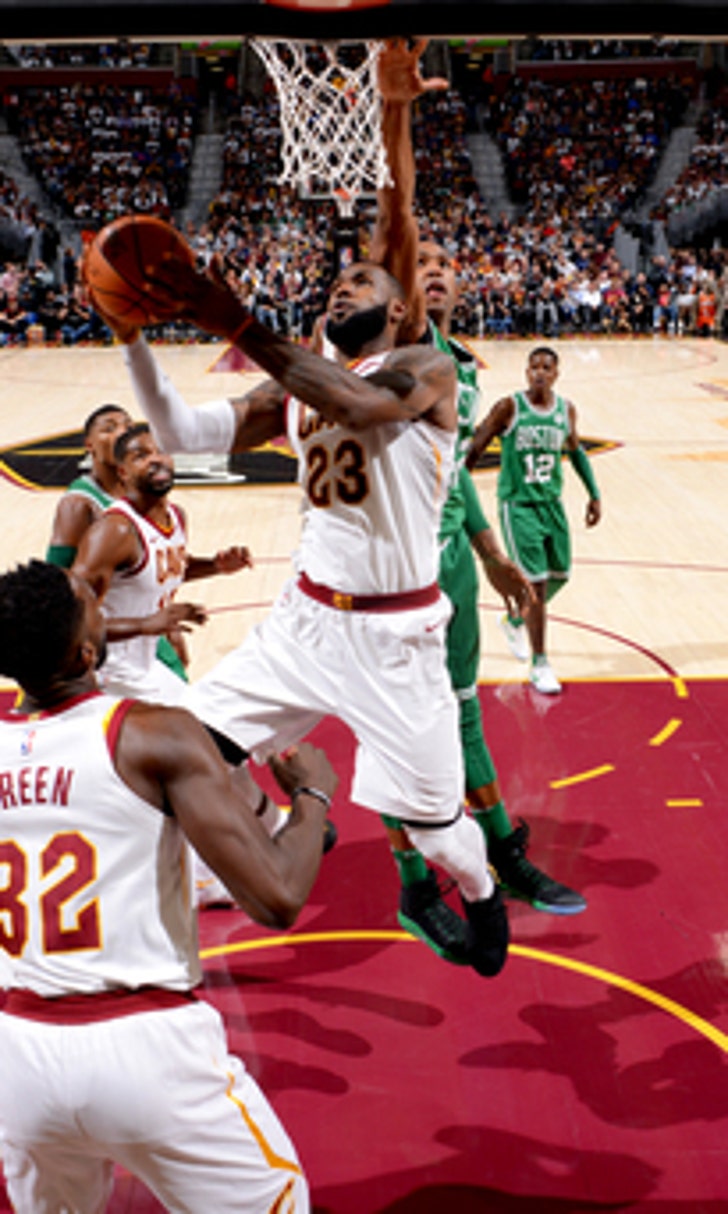 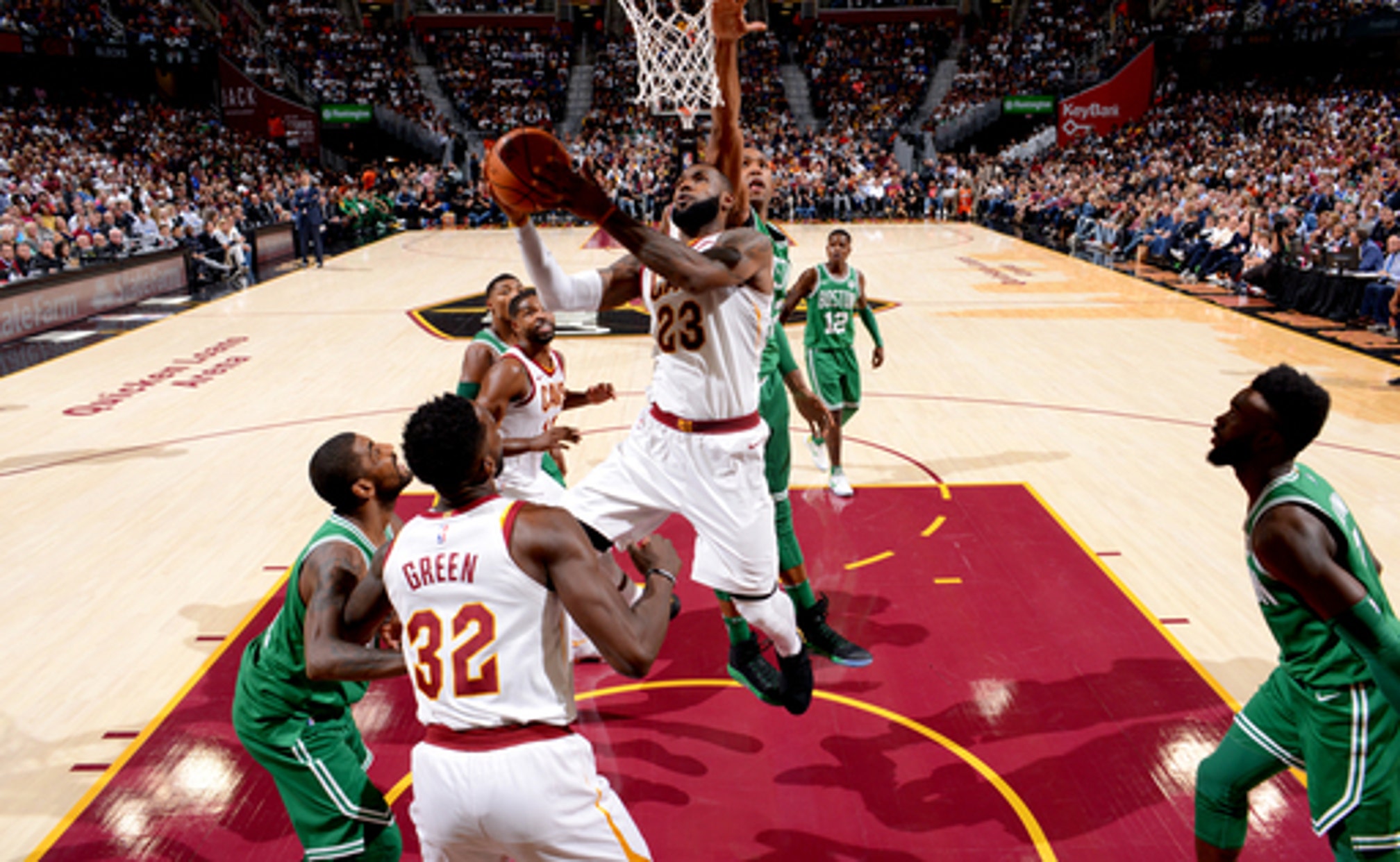 Of all the juicy subplots for this hyped homecoming and a season opener between heated rivals, a serious injury to Hayward wasn't on the list.

Hayward, one of the new Celtics who was going to help them close the gap on Cleveland, broke his left ankle just five minutes into his debut, and Boston was beaten 102-99 on Tuesday night by LeBron James and the Cavaliers.

After the 27-year-old was wheeled from Quicken Loans Arena on a stretcher , offering a thumbs-up on his way to the ambulance, the Celtics rallied but came up short.

The outcome, though, hardly mattered.

''You hurt for him,'' Celtics coach Brad Stevens said of Hayward, his former star at Butler. ''It's a tough, tough deal, but I guess that's part of the risk of injury. I really feel for him.''

James scored 29 points - 13 in the fourth quarter - in his most extensive action in three weeks because of a sprained left ankle. The superstar also fed Kevin Love for a critical 3-pointer with 46.3 seconds left to put the Cavs up 102-98.

Irving, who asked to be traded this summer after six seasons in Cleveland, had a chance to tie it with a 3-pointer at the horn but his shot was short. As the crowd exhaled, Irving shared a warm handshake and embrace with James, his teammate for three seasons and the one he wanted to get away from by demanding a trade this summer.

Jaylen Brown scored 25 and Irving 22 and 10 assists for the Celtics, who overcame an 18-point deficit in the third and led with 2:04 left.

Hayward, who signed a four-year, $128 million free agent contract with the Celtics this summer, was bumped by James while trying to catch an alley-oop pass with 6:45 left in the first quarter. The forward's leg got twisted underneath him as he came back to the floor and snapped his ankle grotesquely, his foot pointing awkwardly to one side.

The 27-year-old sat up, looked at his foot and yelled while some players covered their mouths and others turned their heads.

''My thoughts and prayers go out to Gordon's family. Hope for a speedy recovery, a healthy recovery,'' James said. ''Those are the injuries that you never see coming, you never want to happen, no matter who it is, no matter what the stature, no matter how much competitive nature that you have. It's just very unfortunate.''

Hayward's injury changed the tenor of the highly anticipated matchup, and will alter the direction of Boston's season. Hayward will require surgery and need months to recover. Stevens said Hayward will be taken directly to the hospital in Boston once the Celtics' plane lands

The Celtics were understandably shaken at halftime, and went to the locker room down 16.

However, they battled back and were still leading 98-97 when James, who only played in one exhibition after spraining his ankle on Sept. 27, spun in the lane and made a layup to put Cleveland up by one. On Boston's next possession, James cut off Marcus Smart and deflected the ball off the guard's leg and out of bounds.

James then made a crosscourt pass to a wide-open Love, who drained his 3 to give the Cavs a four-point cushion.

''I just found a familiar face and Kevin was in the right place at the right time,'' James said.

Irving's free throw made it 102-99, and the Celtics had two late chances but both Brown and Irving missed late 3s.

Love had 15 and Derrick Rose 14 in his debut for the Cavs, who are trying to blend new faces and big egos quickly.

After the final horn, James and Irving, who spent part of the summer making subtle jabs at each other following the blockbuster trade, completed their signature handshake and the All-Star point guard greeted several former teammates.

He may still have a ways to go with Cleveland's crowd, which booed him every time he touched the ball.

Irving heard it from the moment he took the floor as Cleveland fans got their first chance to voice their displeasure toward him for demanding to be traded this summer despite three consecutive trips to the NBA Finals and one title.

''It's a really hard game for a guy to play, especially the first game of the season with all the emotion you have to go through,'' Stevens said. ''How he can play at that level is beyond me.''

At halftime, Stevens tried to calm his players.

''I don't have any magic words for that,'' he said. ''We're all feeling for him. I'm not going to try to take the human element out of it.''

In his Cleveland debut, Dwyane Wade scored eight points on 3 of 10 shooting in 28 minutes.

Celtics: Stevens has been impressed with Irving's basketball acumen and how quickly he has picked up Boston's system. ''He's spent a lot of time watching film, a lot of extra time talking about it. He has good insights,'' Stevens said. ''Guys like that can fit in anywhere. It's about how do we all put our strengths together.'' ... Marcus Morris (sore right knee) took part in pregame drills but is out for a week or more.

Cavaliers: James (28,816) passed numerous Hall of Famers while jumping to No. 7 on the career scoring list last season. He came in nearly 1,500 points behind Dirk Nowitzki at No. 6. ... Although it may take some time for the Cavs to find their on-court chemistry, coach Tyronn Lue said that doesn't change his early expectations. ''We still expect to win,'' he said. ''We still expect to play hard and play the right way.''

Cavaliers: At Milwaukee on Friday.