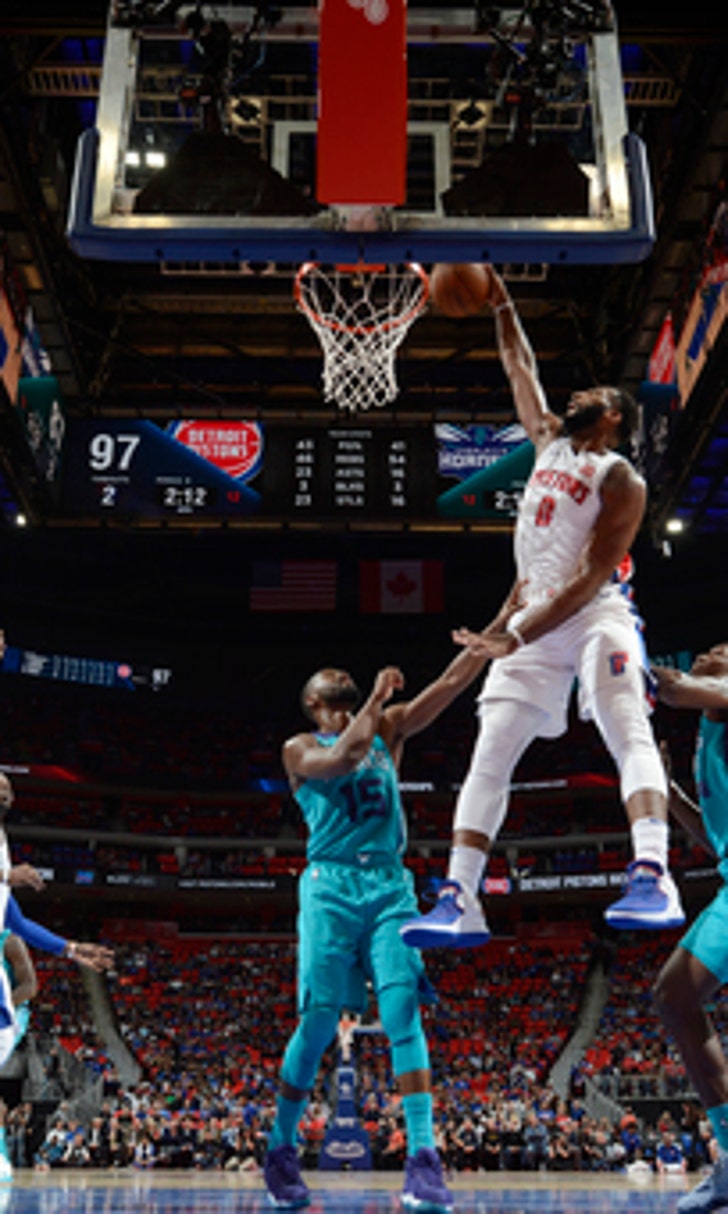 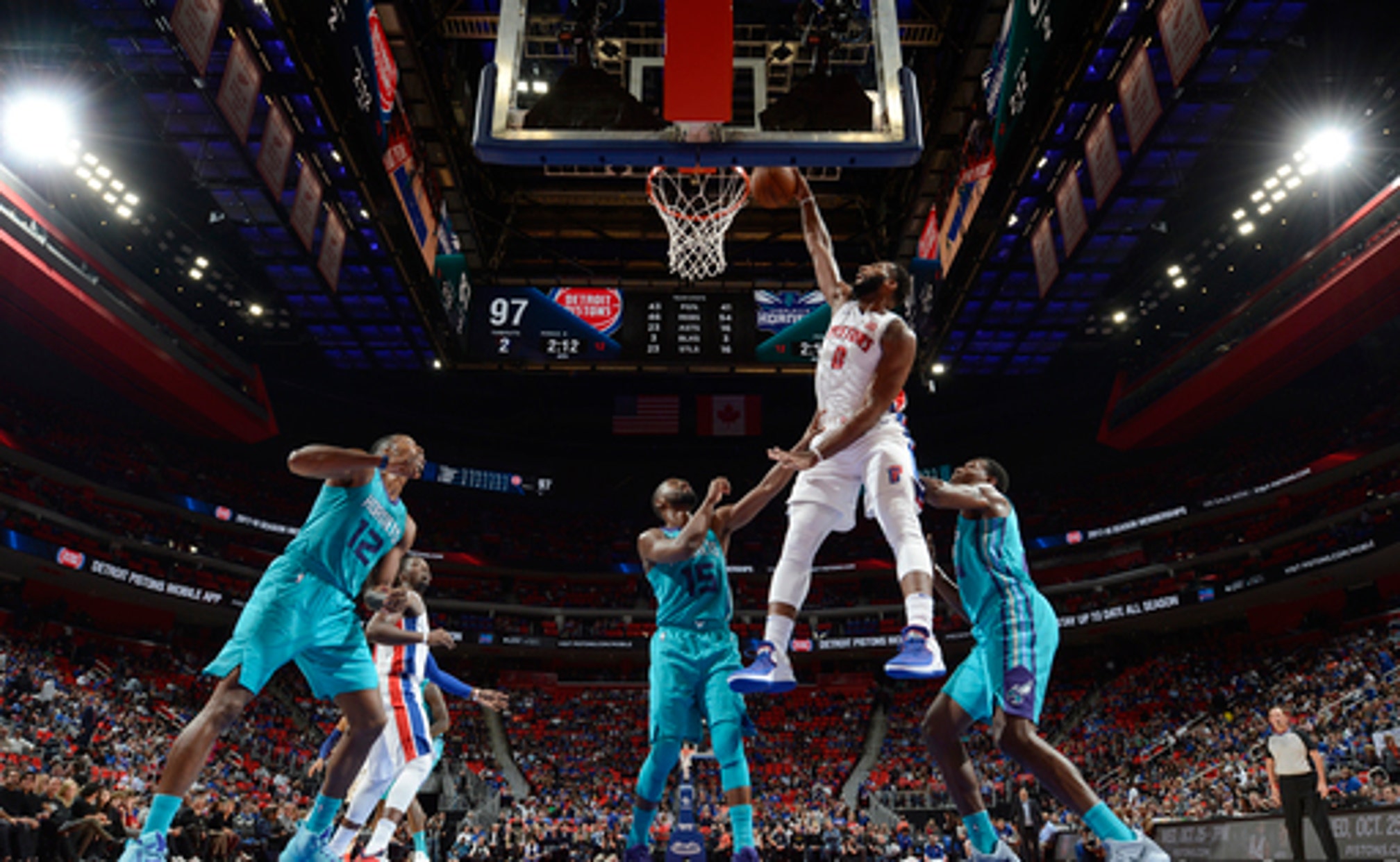 And the Motor City's NBA team gave their fans a reason to cheer.

Tobias Harris scored 17 of his 27 points in the first quarter and grabbed 10 rebounds, helping Detroit celebrate its return to the city with a 102-90 victory over the Charlotte Hornets on Wednesday night.

The Pistons and Charlotte opened the season in Little Caesars Arena, a new facility that drew them downtown for the first time in nearly four decades. Eminem made a surprise appearance, grabbing the microphone to fire up the crowd just before tipoff.

Eminem slipped away from the arena floor, and was later introduced to NBA Commissioner Adam Silver by former Pistons star Grant Hill. Kid Rock and Big Sean , a couple other Motor City musical artists, sat in baseline seats at the opposite ends of the court during the game.

Dwight Howard had 10 points, 15 rebounds and two blocks in his debut with the Hornets.

''This is a long season, so we can't panic after one game,'' Howard said. ''The champs lost (Tuesday night), so anything can happen. We just have to learn from tonight and be better for Friday. We'll do that.

Reserve Langston Galloway scored 16 points, Avery Bradley had 15, and Henry Ellenson added 13 points for Detroit in their first game with the franchise. Reggie Jackson had 13 points and eight assists. Detroit's point guard spent the final seconds of the game hugging teammate Andre Drummond at midcourt, soaking up the feel-good moment after a disappointing season.

''We were just talking about how we have to lead each and every night and be our best selves,'' Jackson said. ''If we want to do something special, we have to do it on a day to day basis.''

The Pistons outscored Charlotte 27-18 in the second quarter, building an 11-point lead they didn't have much trouble keeping.

Hornets: Howard, Lamb, Walker, Marvin Williams and rookie Dwayne Bacon started the game, but coach Steve Clifford said that may not be the team's regular lineup. ''I just don't think we have that kind of team,'' Clifford said. ... Cody Zeller had eight points and nine rebounds for an offensively challenged team that made fewer than 40 percent of its shots.

Pistons: Pistons owner Tom Gores said he has talked to Silver about Detroit hosting an All-Star game and believes it will happen. ''It's just a matter of when,'' Gore said. ... Stanley Johnson was 0 for 13 from the field and made two free throws.

Detroit scored 26 points off Charlotte's 17 turnovers while the Hornets had just six points off the Pistons' nine turnovers.

''Most games, you have to look at the film to figure out the difference in the game, but that's not the case,'' Charlotte coach Steve Clifford said. ''It was obviously the turnovers.''

The Pistons moved back downtown to share an arena with the Red Wings after playing in the suburbs at the Palace of Auburn Hills and the Pontiac Silverdome. The team left Detroit in 1978 after playing in Cobo Arena and Olympia Stadium in the city. The Pistons' welcomed back former starts including Hill, Dave Bing and Bob Lanier for their Little Caesars Arena debut.

''My friends in the `burbs and the city are excited about this,'' Lanier said. ''I think this will bring the energy back for the Pistons from the streets to the suites.''

''Without making any statement, they were able to make a statement by involving Eminem,'' Van Gundy said.

Hornets: Host Atlanta on Friday night in their home opener.

This story has been corrected to show the NBA commissioner's first name is Adam, not David, Silver.

Tobias Harris
share story
those were the latest stories
Want to see more?
View All Stories
Fox Sports™ and © 2020 Fox Media LLC and Fox Sports Interactive Media, LLC. All rights reserved. Use of this website (including any and all parts and components) constitutes your acceptance of these Terms of Use and Updated Privacy Policy. Advertising Choices. Do Not Sell my Personal Info