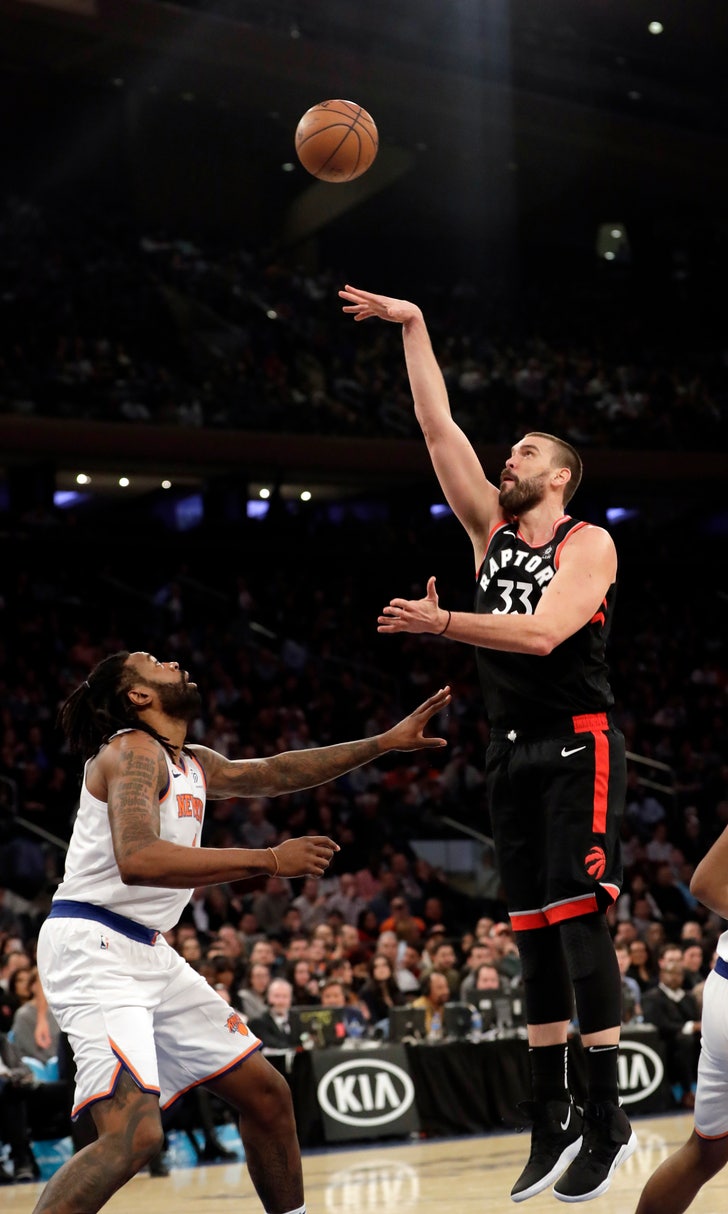 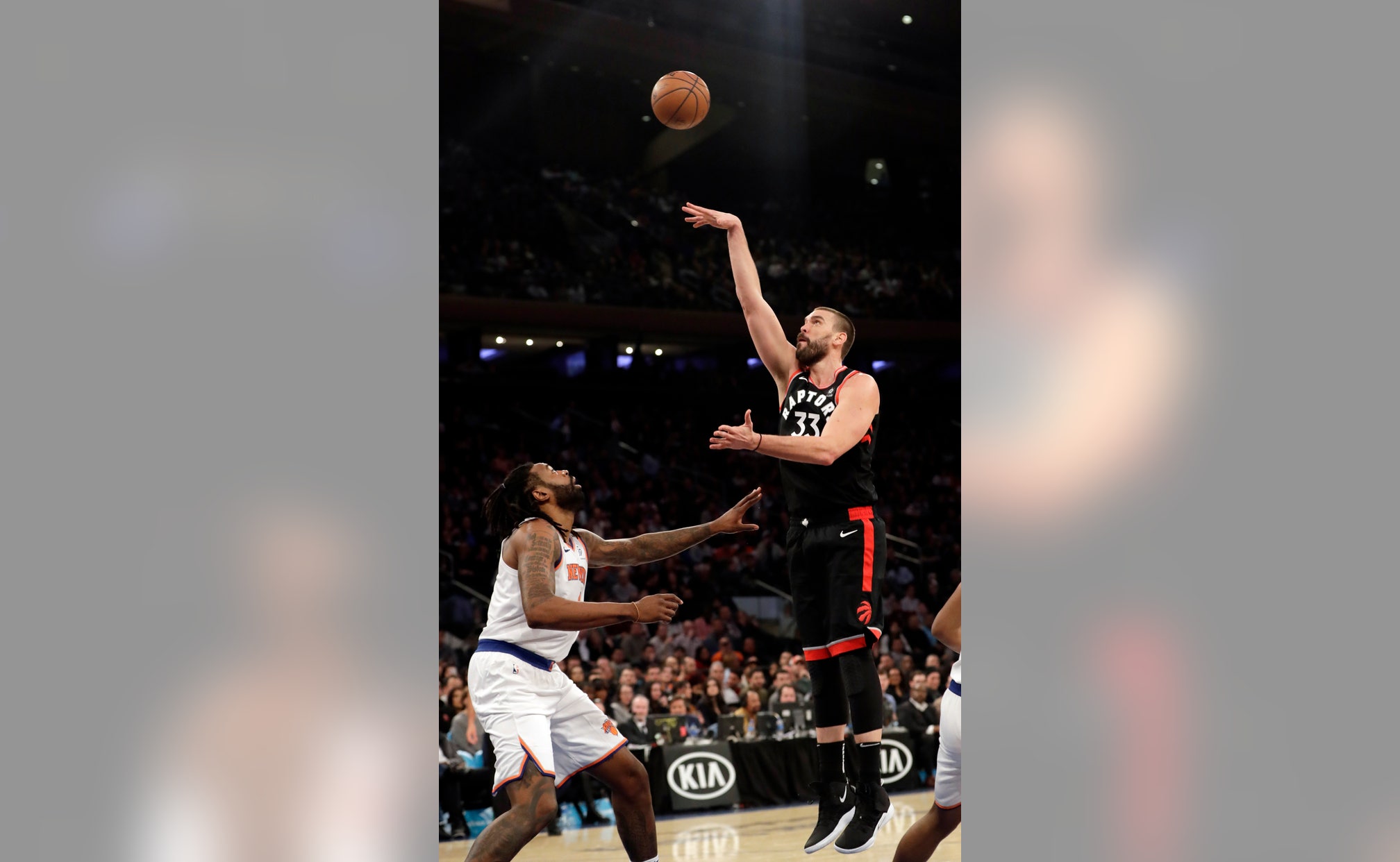 NEW YORK (AP) — Marc Gasol felt like the new kid at school before his first game with the Toronto Raptors.

To get ready, he spent time studying with Raptors assistant coach Sergio Scariolo — who happens to be Gasol's coach on Spain's national team.

"Obviously I asked him a lot of questions about what should have been happening in each situation," Gasol said after a 104-99 win over the New York Knicks on Saturday night.

Gasol had seven points and six rebounds as Toronto sent the Knicks to their franchise record-tying 16th straight loss.

Acquired from Memphis before Thursday's trade deadline, Gasol played 19 minutes. The three-time All-Star entered late in the first quarter and made a hook shot on his first try.

The 7-footer, who spent his first 11 years in the league with the Grizzlies and is set to become a free agent at the conclusion of the season, was beaming about his new teammates.

Gasol teamed up with Kyle Lowry for half a season in Memphis before the point guard moved on and developed himself into an All-Star with Toronto. And Gasol knows Kawhi Leonard well from their battles out in the Western Conference while Leonard was a member of the San Antonio Spurs.

"The mindset is all in. It's a clear goal, it's one goal and that's to play for a championship," Gasol said.

Lowry scored 22 points and Serge Ibaka added 15 points and 13 rebounds for the Raptors.

Mario Hezonja's 3-pointer with 11 seconds to go pulled the Knicks within 102-99. A pair of free throws from Lowry sealed it with eight seconds left.

Green and Norman Powell each had 14 points for the Raptors, who have won their last three games, all on the road.

Raptors coach Nick Nurse inserted Gasol into the game with 2:20 remaining in the first quarter.

"I think for a guy that hasn't been with us, you could see the offense moving pretty well," Nurse said. "He's a guy who is in the right spots to keep things flowing. You throw it to him and there is cutting going on, there is flow to the offense."

Rookie Kevin Knox had 20 points and DeAndre Jordan had 10 points and 18 rebounds for a Knicks team that has not won a game since beating the Los Angeles Lakers on Jan. 4.

This year's squad, with three rookies and seven players with less than three years in the league, also extended a franchise-worst record of 16 consecutive losses on their home floor.

"We understand what this year is," Knicks coach David Fizdale said. "Whatever happens to us this year will not make us crack or waver."

The Knicks took a 14-3 lead on Jordan's put-back dunk before the Raptors called a timeout.

Raptors: Leonard returned to the lineup after missing Thursday's game at Atlanta due to a sore left knee. He scored 11 points, shooting 4-for-15 in 32 minutes.

Leonard will be an unrestricted free agent for the first time in his career and definitely a target of the rebuilding Knicks when the signing period opens up July 1.

New York has enough room in its salary cap to sign two free agents to max contracts, but the low-key Raptors star, who will also be courted by a couple of other teams this summers, was quick to squash any potential free agency rumors in his first visit of the season to Madison Square Garden.

"Just playing my season right now," Leonard said. "Just talk to people, see what I want to do."

Leonard spent some time in the New York area last year away from the Spurs while rehabbing.

He credited the home crowd for supporting a team that dropped to a league-worst 10-45.

"They still come out and support the team even with a losing record," Leonard said. "That's what you want, I guess, from an organization if you're playing for them."

Scariolo will definitely play a big role in Gasol's transitional period with so little practice dates left and 25 games remaining in the regular season before the playoffs start.

The Italian assistant coach, who has led Spain's national team to three Eurobasket gold medals and a silver medal at the 2012 London Olympics and a bronze medal at the 2016 Games in Rio de Janeiro, glowed about some of the attributes that Toronto's prized acquisition brings to the court.

"He probably brings to this team something which they never had, a type of player who never was on this team," Scariolo said.

"Basically he is a great passer, someone who sees the next play a split-second before most of the opponents, most of the teammates as well, most of the coaches."