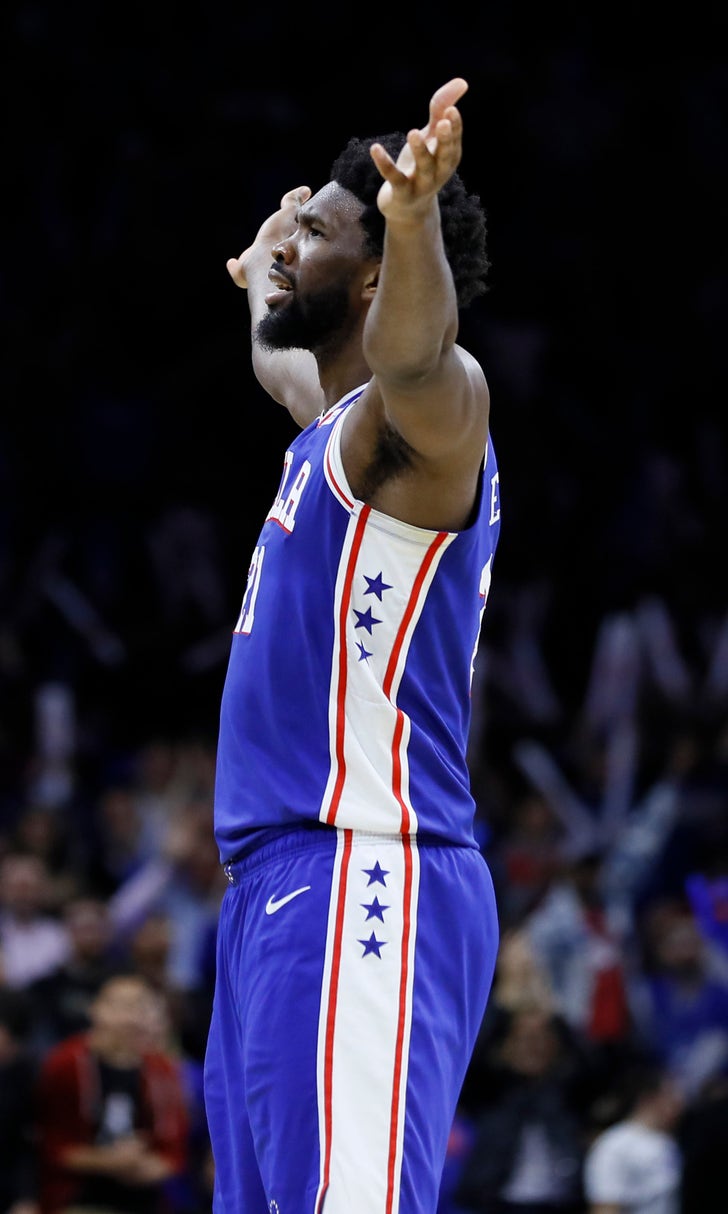 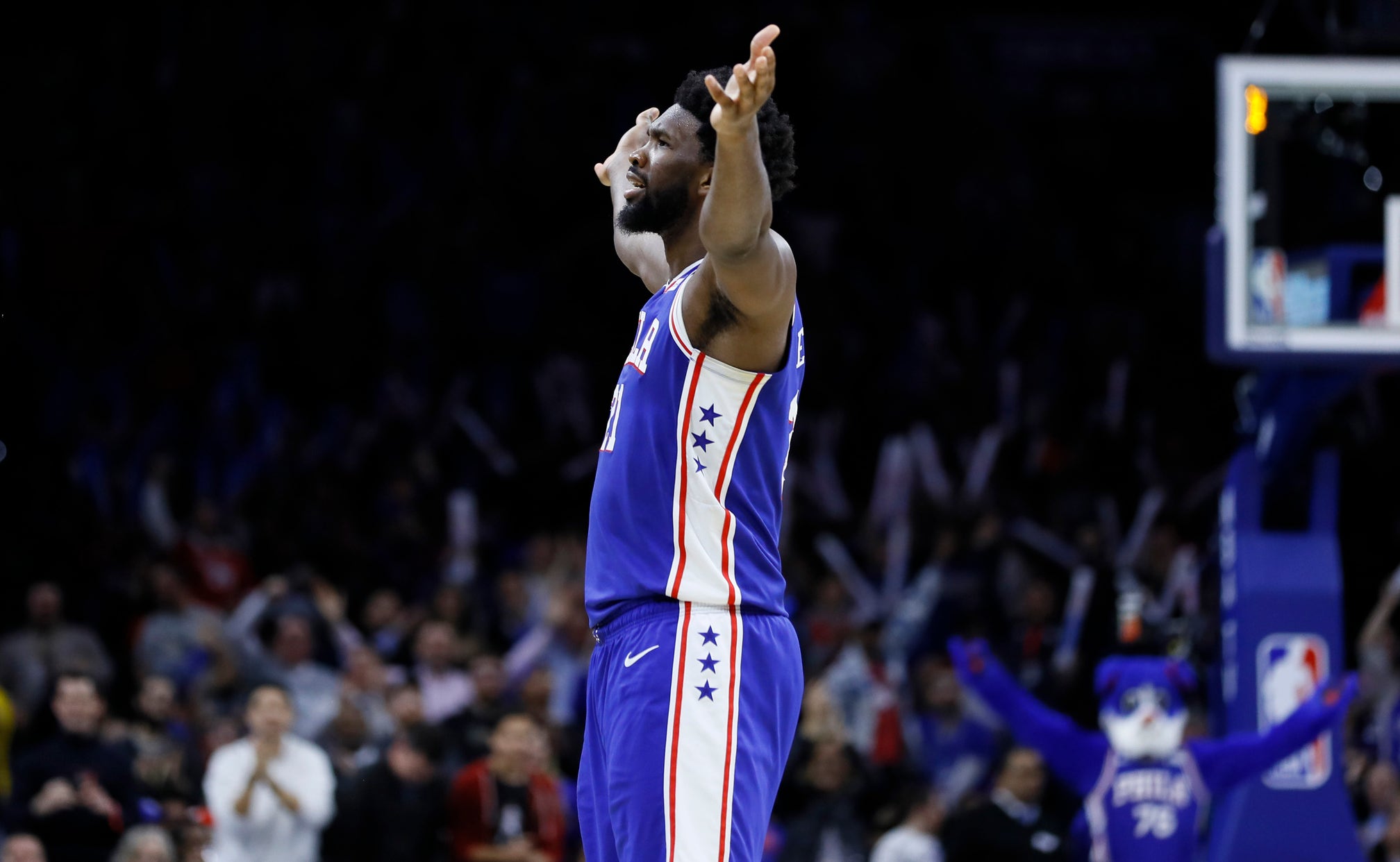 Embiid leads 76ers past Nuggets to stay perfect at home

PHILADELPHIA (AP) — Joel Embiid threw the ball over his shoulder into the basket and celebrated the no-look shot with a little shake and shimmy for the crowd. It was vintage Embiid — and something the fun-loving center wants to do more.

Yes, the 76ers are winning. But their star big man wants to be in the middle of it.

Embiid scored 22 points, including two key free throws with 15.3 seconds left, and Tobias Harris added 20 to keep Philadelphia perfect at home with a 97-92 victory over the Denver Nuggets on Tuesday night.

Matisse Thybulle added 13 points for the Sixers, who are 13-0 in Philadelphia. They have won three straight and seven of eight.

Embiid added 10 rebounds but once again struggled offensively down the stretch. After being benched late in Philadelphia’s 110-104 win over Toronto on Sunday for committing three straight turnovers, he missed a 3-pointer, a jumper and committed a turnover in crunch time before making the two big foul shots.

Fortunately for the 76ers, their defense clamped down on Denver down the stretch.

“I need to be myself,” Embiid said. “When I’m having fun, I dominate.”

Embiid said he has cut back on the extra-curricular activity while trying to be more mature since his two-game suspension for fighting Karl-Anthony Towns on Oct. 30, which was followed by a postgame barrage of insults on social media.

Embiid, however, let loose after his improbable shot ended the third quarter with Philadelphia ahead 83-76, and the crowd loved it.

A two-time All-Star, Embiid entered averaging 21.9 points and 12.5 rebounds per game after putting up 27.5 points and 13.6 boards last season.

Will Barton had 26 points to lead the Nuggets, who have lost three in a row and five of six. Leading scorer Jamal Murray was injured with 6:49 left in the first quarter when he collided with Ben Simmons and didn’t return.

The Nuggets set a franchise record for largest fourth-quarter comeback when they rebounded from 19 points down to start the final period in a 100-97 win over Philadelphia in Denver on Nov. 8. They tried again, but couldn’t come all the way back this time.

The 76ers led by 10 early in the fourth after Josh Richardson’s deep 3-pointer from the top of the key made it 88-78 with 8:54 remaining. The Nuggets scored the next eight, capped by Barton’s three-point play with seven minutes left, to pull to 88-86.

But then Thybulle hit a pivotal 3 and grabbed a big offensive rebound on Philadelphia’s next possession, which ended with Al Horford’s jumper that put the 76ers in front 93-86 with 4:36 to play.

"You could feel the building light up," Philadelphia coach Brett Brown said of Thybulle's impact. "He's an energy giver when he can make those plays."

Denver had chances from that point on but went cold from the field, making just one field goal until Nikola Jokic’s runner made it 95-92 with 18.9 seconds left. The Nuggets had just six points in the last seven minutes, missing seven of nine shots.

Nuggets coach Michael Malone liked his team’s resolve but said the lack of offensive execution is a recurring problem.

“Our offense has been holding us back and tonight was another example,” he said. “We have to find ways to be more consistent.”

Philadelphia is within nine victories of matching the franchise mark for consecutive home wins to start a season, set during the 1966-67 season.

“It says we have a great crowd and great focus here,” Harris said.

Nuggets: Malone received a technical with 7:16 left in the first half. … Barton scored the first 13 Denver points. … Jokic had 15 points, seven rebounds and 11 assists. ... Murray went scoreless and left with what the team called a "trunk contusion."

76ers: Richardson returned to the lineup after missing six games with a right hamstring strain. He had three points.

76ers: At the Boston Celtics on Thursday.