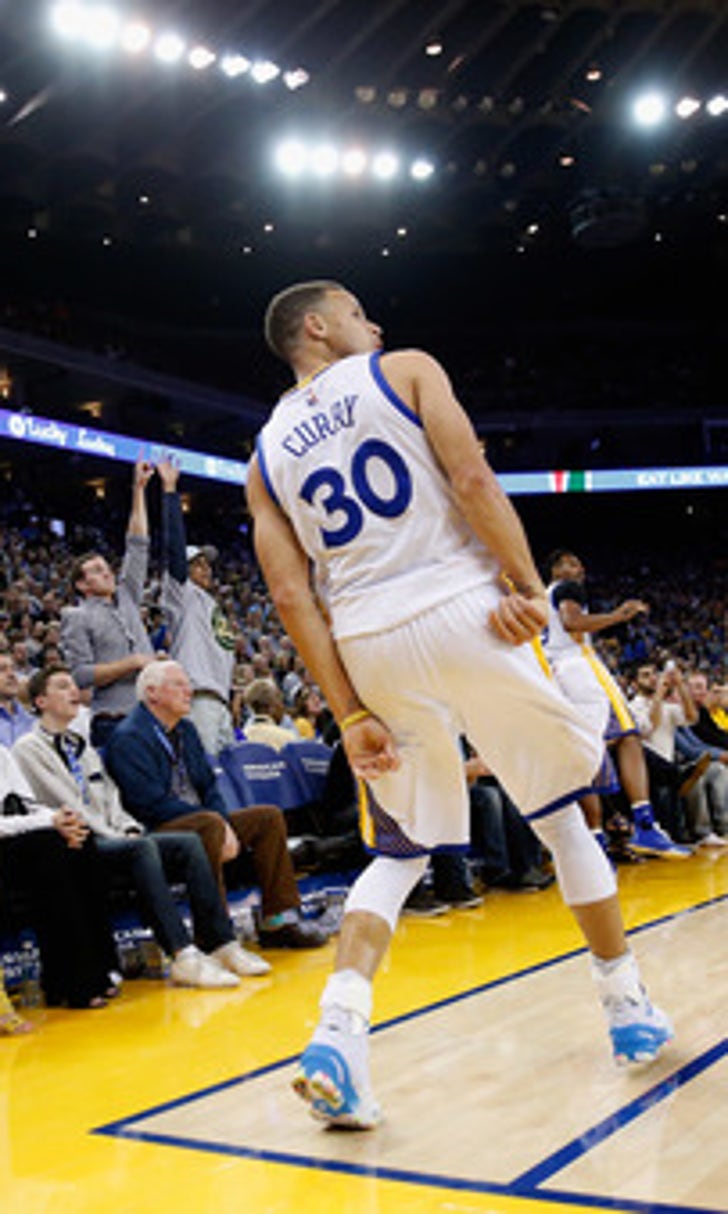 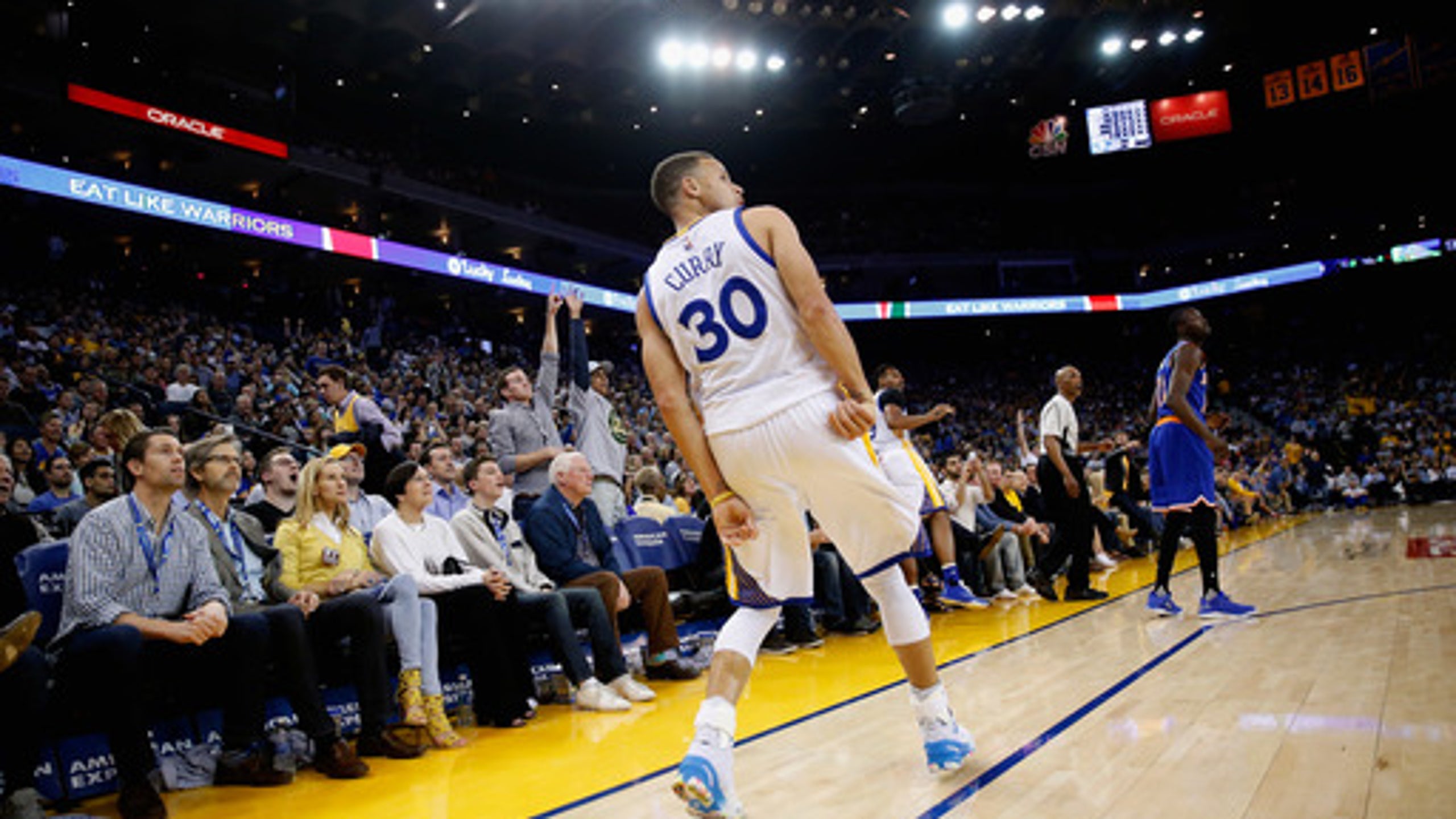 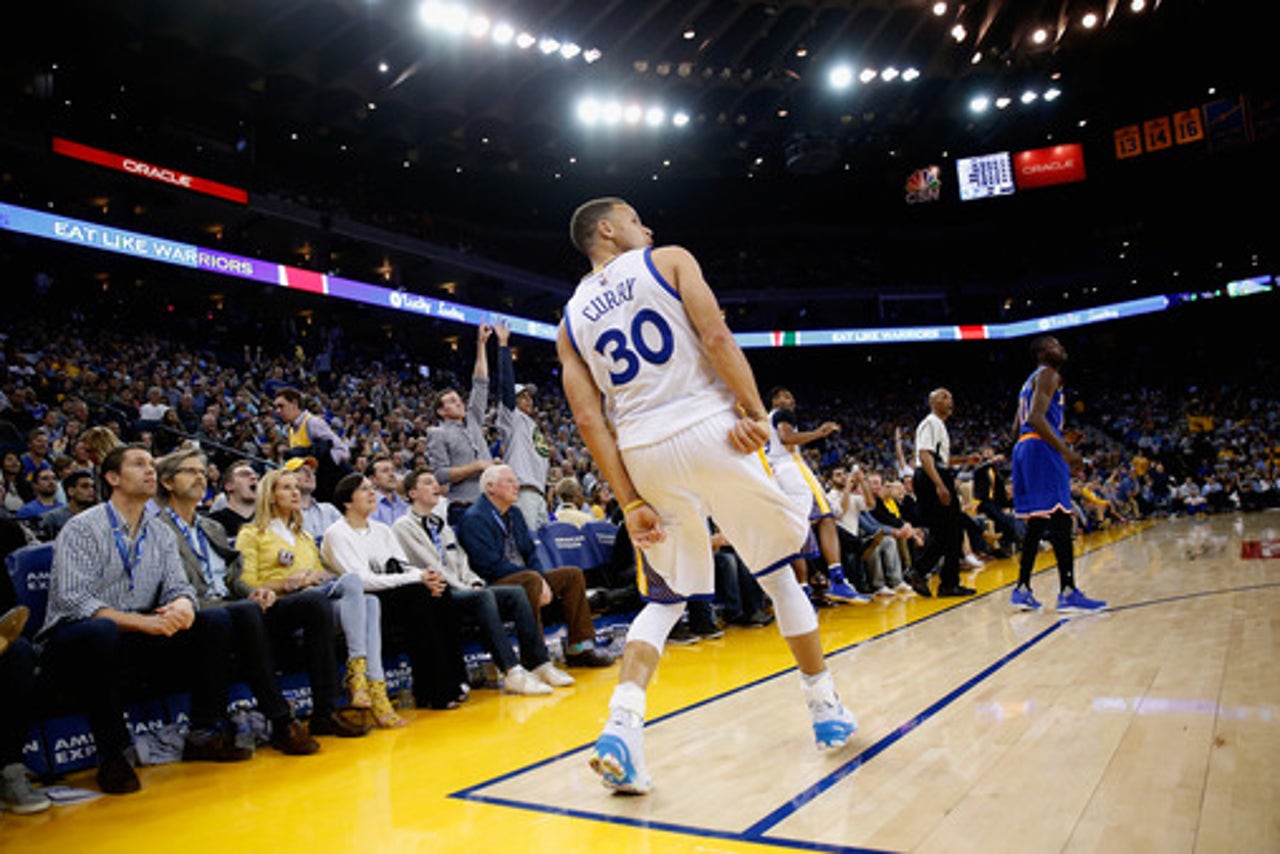 OAKLAND, Calif. — Here's an uncanny option for the defending NBA champions: 6-foot-10 Marreese Speights spotting up from deep and getting in on the 3-point fun right alongside Stephen Curry and Klay Thompson.

"He's auditioning for that Splash Cousin, maybe," said Curry, who with Thompson makes up Golden State's Splash Brothers. "He's definitely confident out there now. We love that. It adds a new element to our lineup and our rotation when he's able to step into those 3s and knock them down. We'll keep feeding him. Definitely a crowd pleaser, and it gets us going on the bench, too."

Curry scored 34 points in another brilliant 3-point shooting performance and the Warriors extended their record regular-season home winning streak to 50 games with a 121-85 victory over the New York Knicks on Wednesday night.

Curry shot 8 for 13 from long range and 12 of 20 from the floor overall before sitting out the fourth quarter with his team up big. The reigning MVP hit 3-pointers on three straight possessions late in the first quarter and on two in a row at the end of the third as the Warriors improved to 32-0 at Oracle Arena this season.

So, how about 50 straight home wins?

"I don't think any of us are really thinking about numbers," coach Steve Kerr said. "That's one of the reasons we're having such a good season. We're not paying any attention to anything that doesn't matter."

Carmelo Anthony had 18 points, six rebounds and six assists for the Knicks.

"It's unbelievable, the way that they play. The lineups that they mess around with out there," Anthony said. "Their record, 61-6, we're witnessing, kind of, history here. It's hard to give them a pat on the back when you just got your (tail) whipped."

Curry banked in an off-balance 3 as the shot clock expired late in the third, then hit one from the baseline moments later. Already the first player in NBA history with 300 3s during a season, he has 330 with 15 games to go.

Draymond Green, who had a triple-double at New York on Jan. 31 in which he made all nine of his field goals, finished with six points, 11 rebounds and 10 assists.

During one stretch, the Warriors had four 3s in five trips down the floor late in the first and made eight straight shots to build a commanding lead they never relinquished in a fourth straight victory against the Knicks. Golden State wound up 18 for 37 from deep, 48.6 percent.

"It's good to have a green light from the 3-point line when you're open," Speights said.

The second time around is harder, Kerr knows that much. Even with his loose, winning bunch.

Everything was a first for Golden State a year ago, its first title in 40 years during Kerr's first season as coach.

VIDEO: Stephen Curry on Warriors win over Knicks: "The energy was amazing from the start" ? (0:43) https://t.co/RIP51y1JeS

All the records this season and pressure to win another trophy while getting every team's best each night, it can be a tough grind for his team.

"This year feels a little more tiresome," Kerr said. "Trying to give them time off at the right time, trying to keep the practices short and sweet and not overwhelming them with too many film sessions and that kind of stuff."

Knicks: New York has lost 21 of the last 27 to Golden State. ... Coach Kurt Rambis said G Tony Wroten won't join the team until after the season. "We'll see what he can bring in summer league."

Warriors: Speights hit two or more 3s in a game for the fifth time in his career and fourth this season. ... F Kevon Looney had an MRI exam that revealed right hip inflammation. He won't go on the upcoming three-game road trip. G Andre Iguodala (sprained left ankle) and C Festus Ezeli (left knee surgery) also won't travel. Ezeli is scheduled to be re-evaluated next week. ... Golden State plays at San Antonio on Saturday in a back-to-back during a quick three-game road trip and has lost 32 straight there since 1996 — and hasn't won on San Antonio's home floor in the regular season since Tim Duncan arrived in the league. The Warriors return for nine of their final 12 games at home. ... James Michael McAdoo hit his first career 3 on his first attempt.

Knicks: At Washington on Saturday.

Warriors: At Dallas on Friday.