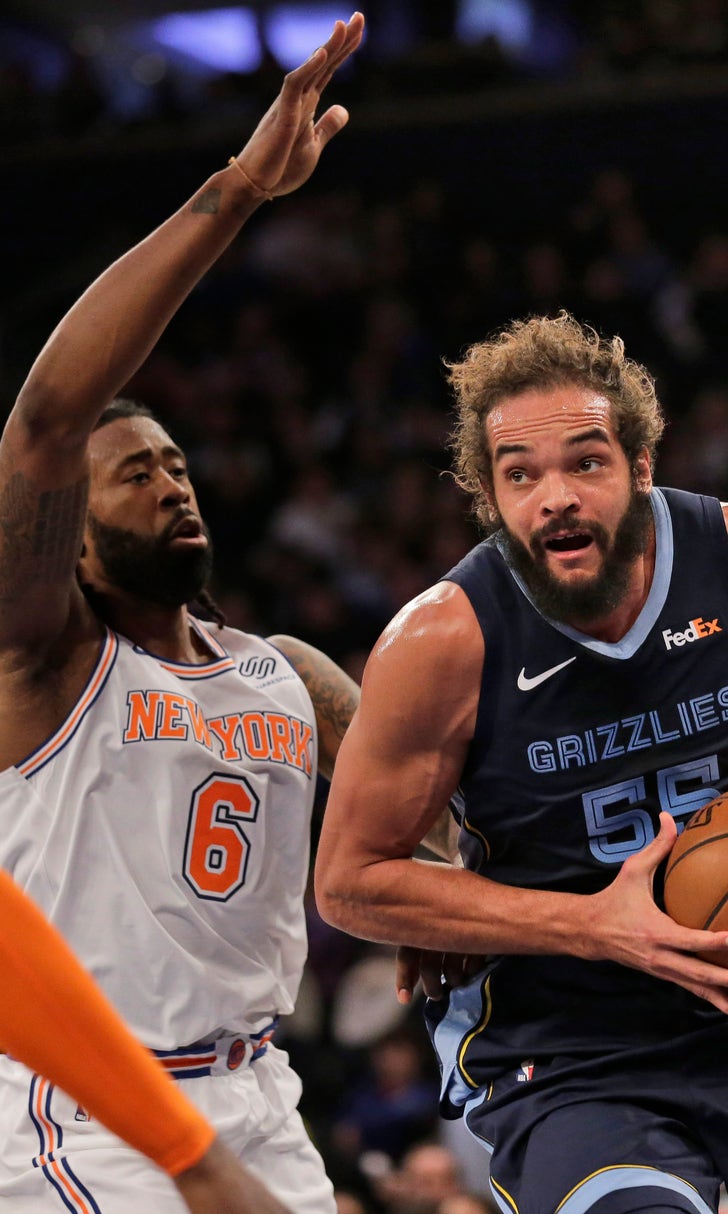 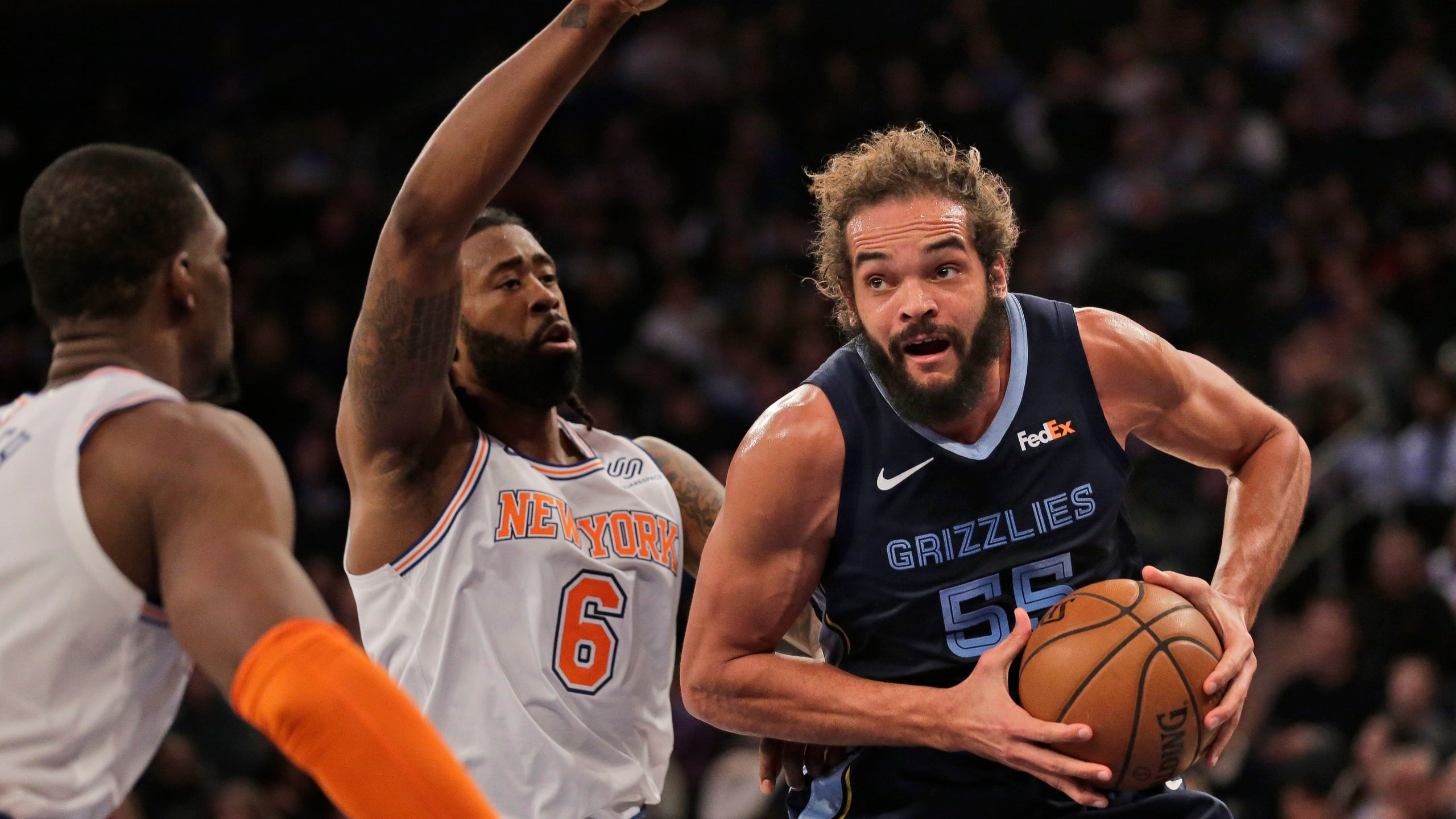 NEW YORK (AP) — Marc Gasol was conducting his postgame interviews when his cellphone began buzzing with a call from his agent.

Gasol declined to answer. If it was trade news, it could wait until after he was done talking basketball.

"I'm not in the mood right now," Gasol said, smiling. "I still want to enjoy this."

Especially because his team had just looked like the Memphis Grizzlies of old.

Mike Conley scored 25 points, Gasol had 24 and Memphis snapped a nine-game road losing streak with a 96-84 victory over the New York Knicks on Sunday.

Memphis had lost three in a row and 17 of its last 19 overall but didn't allow more than 22 points in a quarter Sunday in a performance that used to be the norm when the Grizzlies were a perennial playoff team, not one that could be preparing for a rebuild.

"This showed that we still have that, have that core grit-grind kind of mentality regardless of how we've been playing," Conley said.

Conley added eight rebounds and seven assists in a strong return to the lineup after missing a game with left knee soreness. Gasol chipped in nine rebounds in what could have been the longtime teammates' final road game with the Grizzlies.

The team has fallen from playoff contention after a strong start and told the players it will listen to offers for both ahead of Thursday's NBA trade deadline. Conley and Gasol both acknowledged it's been hard not to think about their futures in recent days.

"When we play together, we know the things that we can do," Gasol said.

The Grizzlies have one more game before the deadline, at home Tuesday against Minnesota.

Justin Holiday added 19 points and Jaren Jackson Jr. had 16 in the Grizzlies' first road victory since Dec. 23 at the Lakers.

Kevin Knox scored 17 points and DeAndre Jordan had 12 points and 12 rebounds for the Knicks, who lost their 13th straight overall and 14th in a row at Madison Square Garden.

The Knicks started Dennis Smith Jr. and Jordan in their first game in uniform since coming to New York from Dallas along with Wesley Matthews on Thursday in the Kristaps Porzingis trade. Smith made the first basket of the game, but the Knicks — with the newcomers not having practiced with the team yet — shot just 38 percent against one of the league's best defensive teams.

Grizzlies: Jackson had also missed the previous game with a right quadriceps injury. ... The Grizzlies signed forward Bruno Caboclo to a second 10-day contract Sunday. He started and was scoreless.

Knicks: Smith, Jordan and Matthews played their second straight game at MSG but for two different teams. Dallas won here on Wednesday night, when Smith had his second career triple-double. ... Matthews was 2 for 8 for five points. ... Fizdale split two meetings this season against the team he formerly coached.

Enes Kanter thought he was getting a chance to play in the second quarter, walking from the bench toward the scorer's table as fans cheered. Assistant coach Keith Smart actually wanted Smith, so Kanter returned to his seat as the cheers quickly turned to boos.

"He did say Dennis and I looked at him, I looked at the other players. They're looking at me. I am like, 'OK, I guess he called my name,' and then I got up," Kanter said. "I just walked in there and they said nope, sit down. The crowd was like, 'Ugh.'"

Joakim Noah was booed nearly every time he touched the ball in his first game at Madison Square Garden since his failed run here that ended with him banished from the team after an argument with former coach Jeff Hornacek. Noah, who had been given a $72 million, four-year deal by Phil Jackson to return to his hometown, was eventually waived and signed with the Grizzlies. Noah, who scored four points, felt the Knicks underachieved while he was here.

"I take some blame. I didn't perform to what I was capable of, even though I had a lot of injures, I had a lot going on outside the court," Noah said. "So it's disappointing. It's definitely something I have to live with."