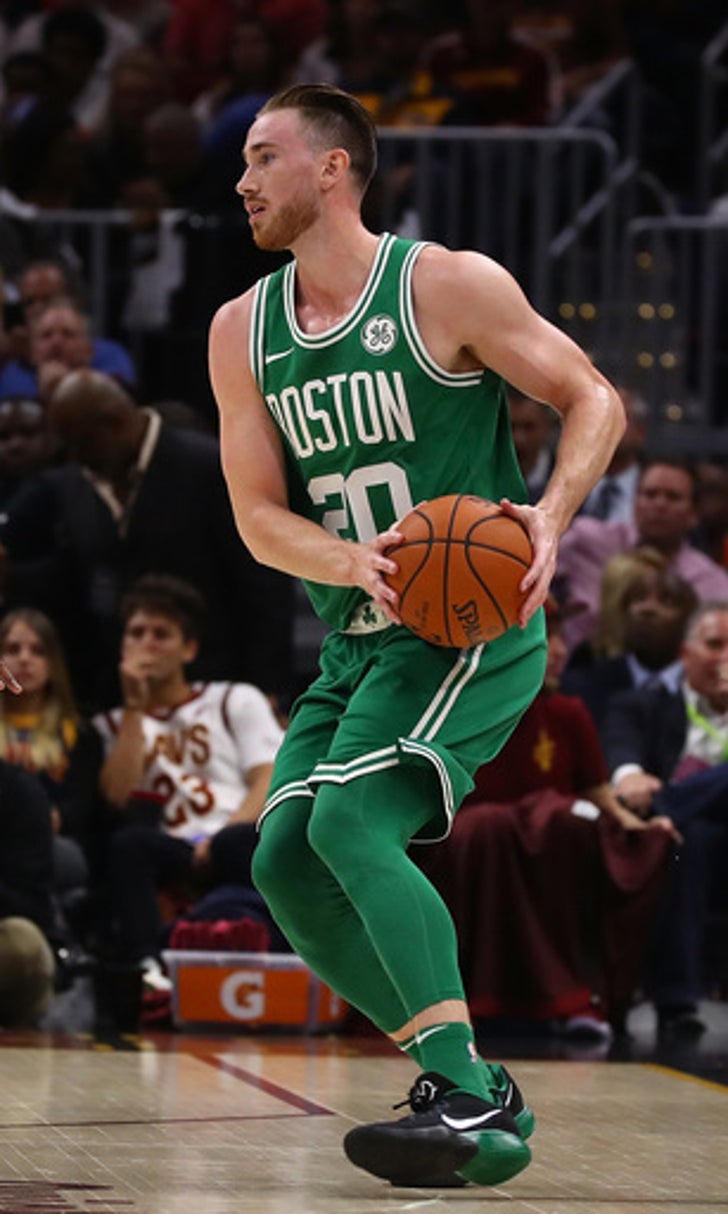 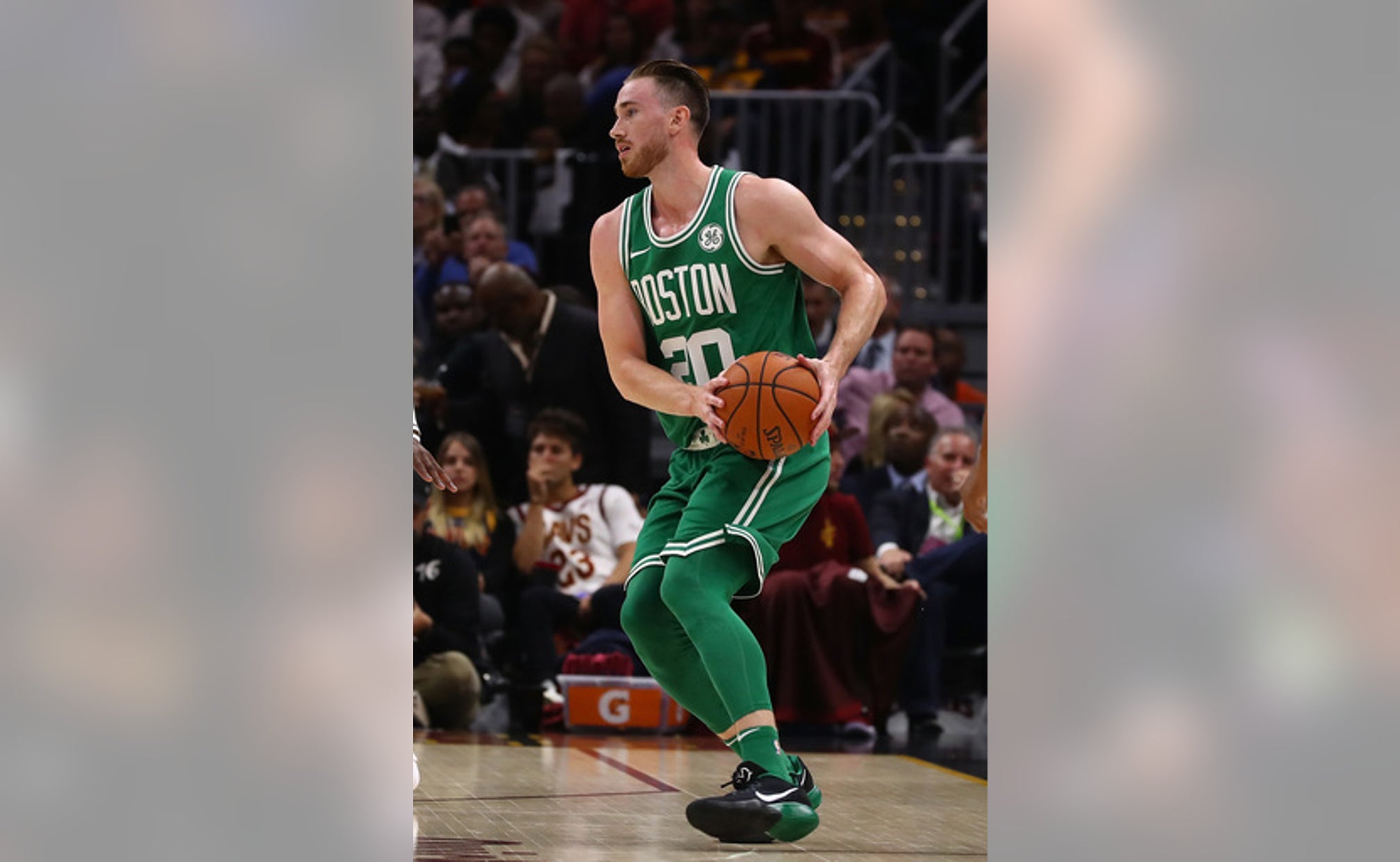 WALTHAM, Mass. (AP) Gordon Hayward has been able to spend time with his daughters since his injury, though the 1- and 2-year-old girls aren't sure what to make of the fact that he's around so much more.

''They know Daddy has a `boo-boo,''' the Boston Celtics forward said Thursday in his first news conference since a horrific opening-night injury that is expected to keep him out for the rest of the season. ''I have a scooter at home; it's another toy for them to play with. Another thing for them to get hurt on.''

Less than three weeks after breaking his left leg on the court less than six minutes into his Celtics career, Hawyard limped out onto the team's practice court with crutches to talk about the injury and his plans for the season. Unwilling to put a timetable on his return - his agent has said it won't be this year - Hayward will instead spend his time rehabbing, helping the coaching staff and ''chair-shooting,'' just to keep his eye sharp.

''I'm on the road to recovery,'' he told reporters. ''It feels good to talk in front of you guys and to get out of the house a little bit.''

An Indianapolis native who stayed home to play at Butler, Hayward played the first seven years of his NBA career with the Utah Jazz before agreeing to a four-year, $128 million deal to reunite with Bulldogs coach Brad Stevens in Boston. But in the first quarter of the season opener against Cleveland, Hayward landed awkwardly and crumpled to the court with his left leg bent at an unnatural angle.

To fly back to Boston with the team that night, Hayward had to be carried up two flights of stairs onto the plane. It took four people, and Stevens insisted on helping.

''There was probably 20 people there. But Brad wanted to make sure he was one of the people who carried me up the stairs,'' Hayward said. ''That's just the type of person he is.''

The next night, while the Celtics played their home opener without him, Hayward had surgery to repair a broken tibia and dislocated ankle. His agent, Mark Bartelstein, said he is expected to make a full recovery but ''it's very unlikely he'll play this season.''

Hayward said he has heard from all around the NBA since the injury - including Oklahoma City forward Paul George, who had a similarly devastating injury while practicing for the U.S. Olympic team. Hayward was there when it happened.

''I know that he knows exactly what it's like,'' Hayward said, adding that one of the things George told him was that the recovery ''doesn't go as fast as you want it to go.''

Hayward also received messages from other athletes, including Kobe Bryant and NFL players Odell Beckham Jr. and J.J. Watt. He also got an email from former President Barack Obama. All of the support has helped him keep his injury in perspective.

''I still have negative thoughts; it's hard not to, especially when you watch the games. I think I wouldn't be human if I didn't have those thoughts. But there's no reason to continue to sulk and have self-pity,'' he said. ''At the end of the day, it's a basketball injury and people are going through way, way worse.''

The Celtics finished with the No. 1 seed in the East last season, losing in the conference finals to the Cavaliers. During the summer, general manager Danny Ainge revamped the roster, signing Hayward as a free agent and then trading star point guard Isaiah Thomas to Cleveland for fellow all-star Kyrie Irving.

Hayward, who agonized over leaving Utah, said he had high hopes for the season, and he ''wanted it to go differently.''

''So I was just devastated that I wouldn't be able to contribute, wouldn't be able to have the season I wanted to have,'' he said. ''It's going to be really important for me and my mental health to stay involved, to still be a part of the team, be around them as much as I can.''

At breakfast with Stevens on Thursday morning, the two discussed ways to keep Hayward involved. He will watch video and offer tips to his teammates while also doing everything he can to get back - if not for this season, then 2018-19.

For now, he's even gotten back onto the court, even if it's only for ''chair-shooting.''

''For two weeks I was in a bed. Those hours seem to last forever,'' he said. ''Just to be out on the court and holding the basketball, that was an incredible feeling.''