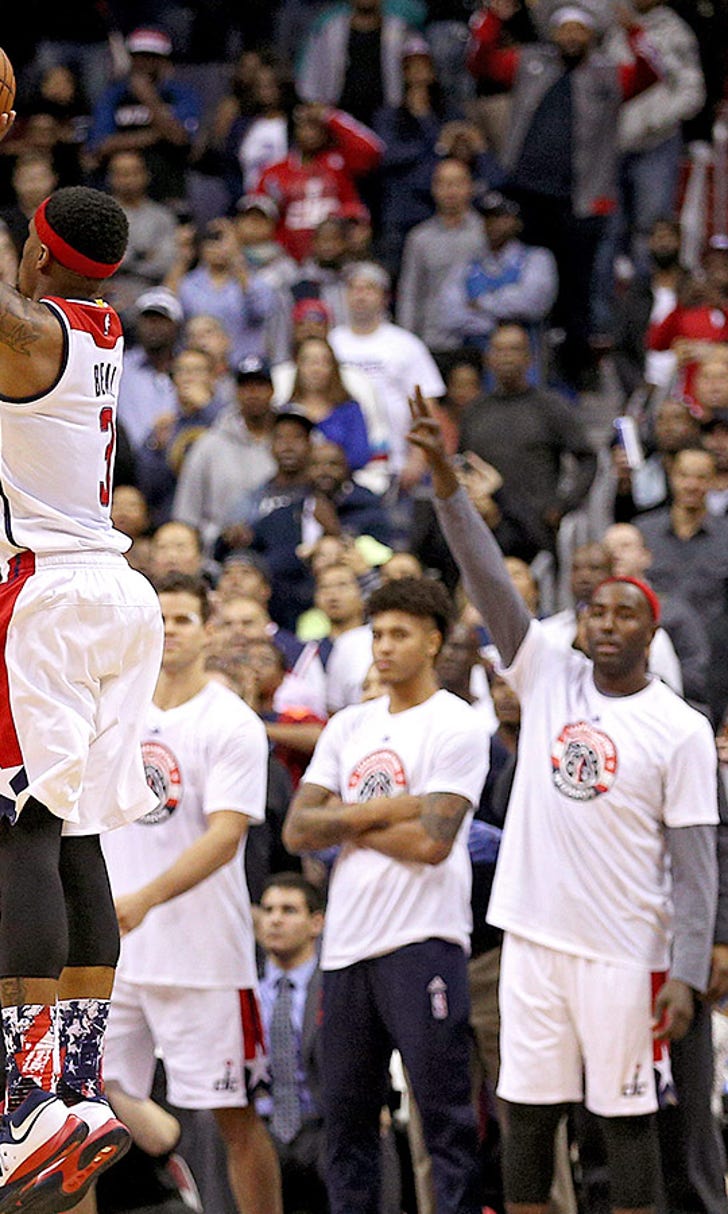 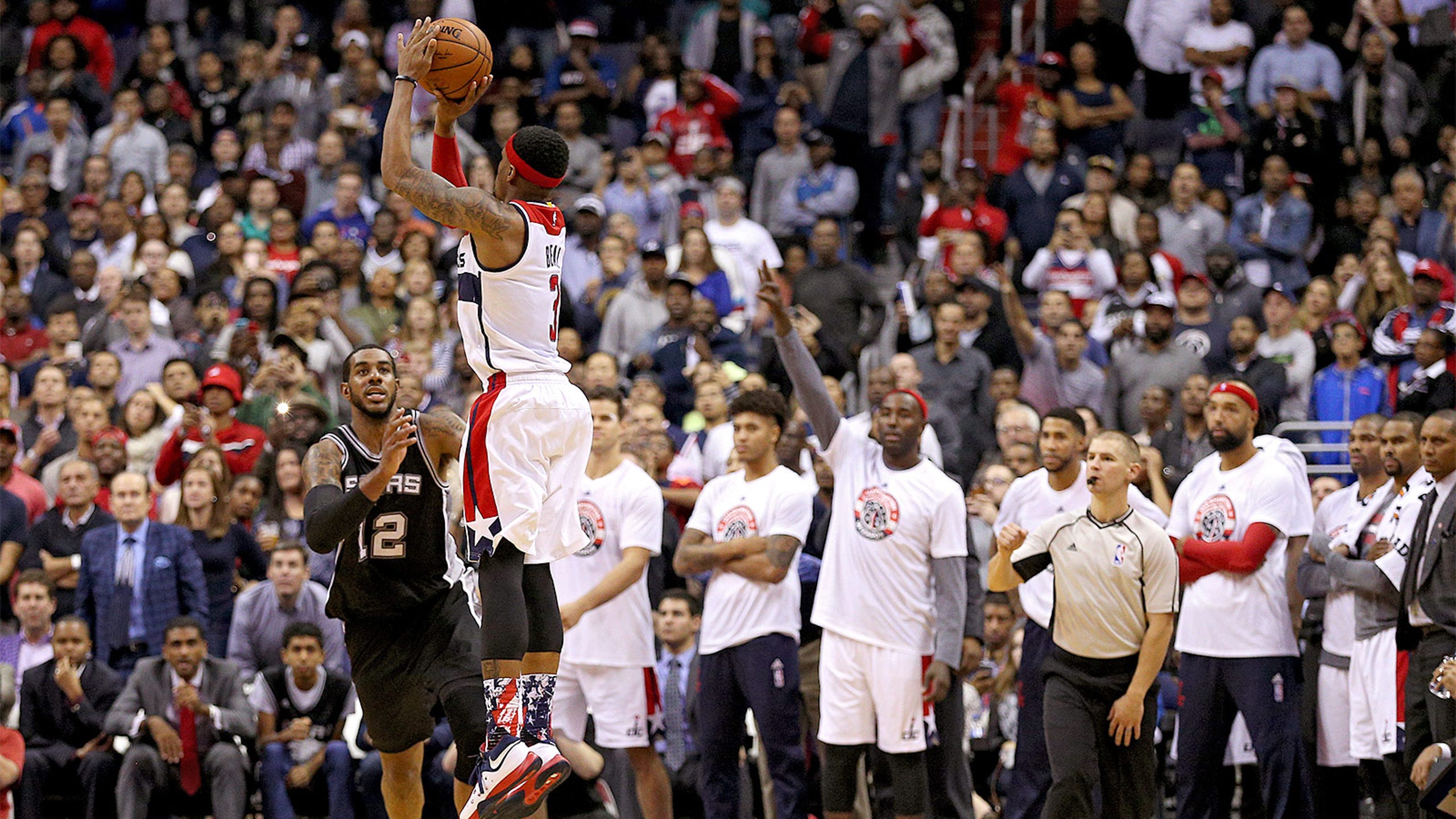 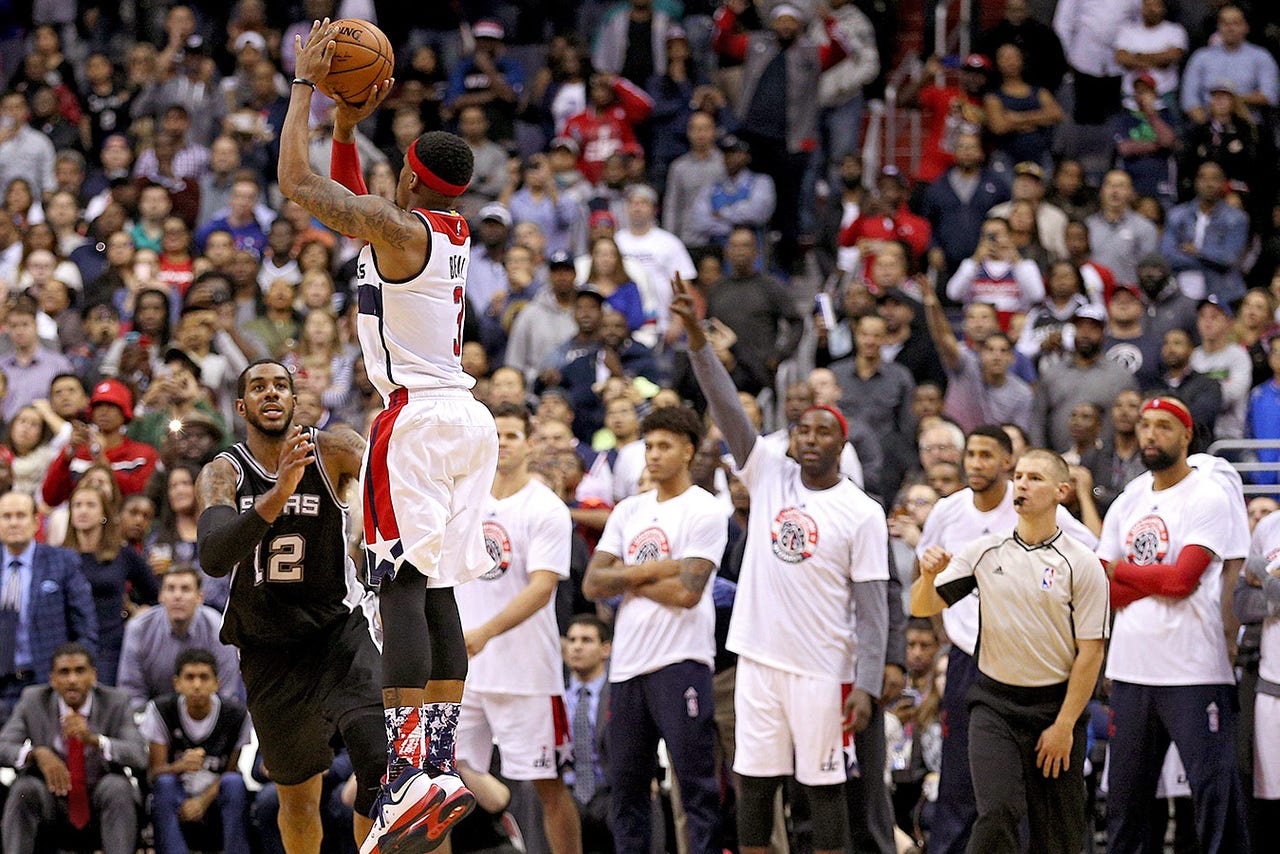 WASHINGTON — Even the NBA's reigning defender of the year couldn't stop Bradley Beal on Wednesday night.

Beal made a 3-pointer with 0.3 seconds remaining to punctuate his 25-point performance against Kawhi Leonard and lift the Washington Wizards to a 102-99 victory over the San Antonio Spurs.

"It's just me coming into my own, I guess," said the 22-year-old Beal, who shot 11 of 22 on a night when Leonard was his primary defender.

"He's definitely one of the best to ever guard me," said Beal, who has scored 24 or more points in all four of Washington's games this season. "But at the same time, I'm not going to let anybody just keep me from being me."

John Wall scored 15 of his 17 points after halftime, including 13 in the fourth quarter, and added 13 assists for Washington. Wall and Beal, who entered Wednesday as the league's top-scoring guard duo, had the Wizards' last 15 points.

Leonard led San Antonio with 23 points and Tony Parker scored 11 of his 17 points in the fourth quarter. LaMarcus Aldridge had 10 points and 14 rebounds for the Spurs, who committed 21 turnovers and had their three-game win streak snapped.

"We had turnovers that weren't caused," Aldridge said. "Trying to throw full-court passes, trying to throw fast-break passes and the guys not looking. Things like that."

After losing their lead late in the fourth quarter, the Spurs tied it three times, the last coming when Parker sank a 3-pointer from the right wing to make it 99-all with 7.9 seconds left.

After two Wizards timeouts, Wall got the ball off the inbounds and Beal set a screen, popped out to the right and took Wall's pass. Aldridge switched to guard Beal, who took a dribble to his left and rose to sink the winning shot over Aldridge's late lunge.

"It was a late read," Aldridge said. "I tried to get out there, and he made a good jab on me and made the shot."

Said Beal: "Out of all my shots tonight, that one felt the best. Everything was in rhythm. It just felt naturally good."

Spurs: F Tim Duncan played in his 1,336th NBA game, moving ahead of Gary Payton for 10th all-time. ... Parker made his 1,000th NBA start. ... The Spurs made their first 11 free throws before Boris Diaw missed the first of two with 33 seconds remaining in the third quarter.

Wizards: The Wizards have allowed at least 50 points in every first half this season after allowing 51 to the Spurs. ... Wall's 13 assists were his most since registering 14 at Memphis on April 4 last season.

New Washington Nationals manager Dusty Baker received a hearty ovation when he was shown on the videoboard sitting in a lower-level suite with general manager Mike Rizzo. Baker will be officially introduced at a news conference Thursday.

RUNS AT THE START

Washington opened the game on a 19-2 run before San Antonio answered with a 28-5 response to lead 30-24 early in the second quarter.

Spurs: "What would you like to hear? We did drills before we came? Or we sought counsel from a yogi? You just go play the game." — Coach Gregg Popovich, asked before the game about preparing for Wall and Beal.