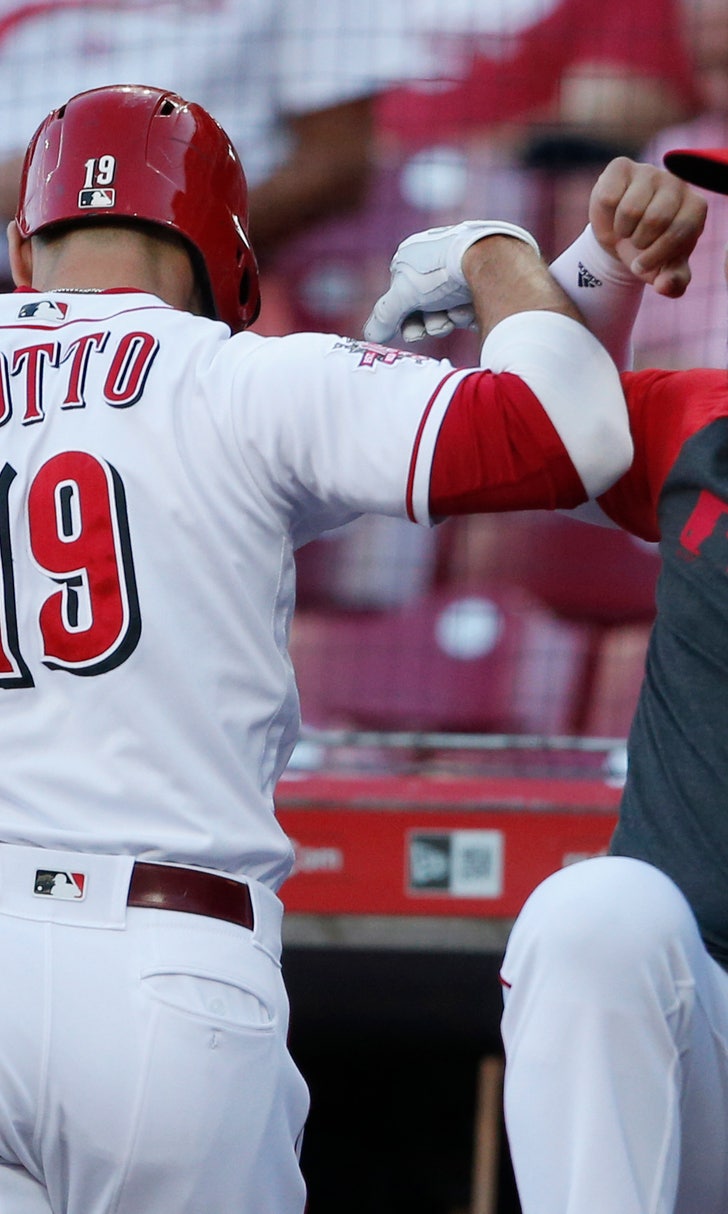 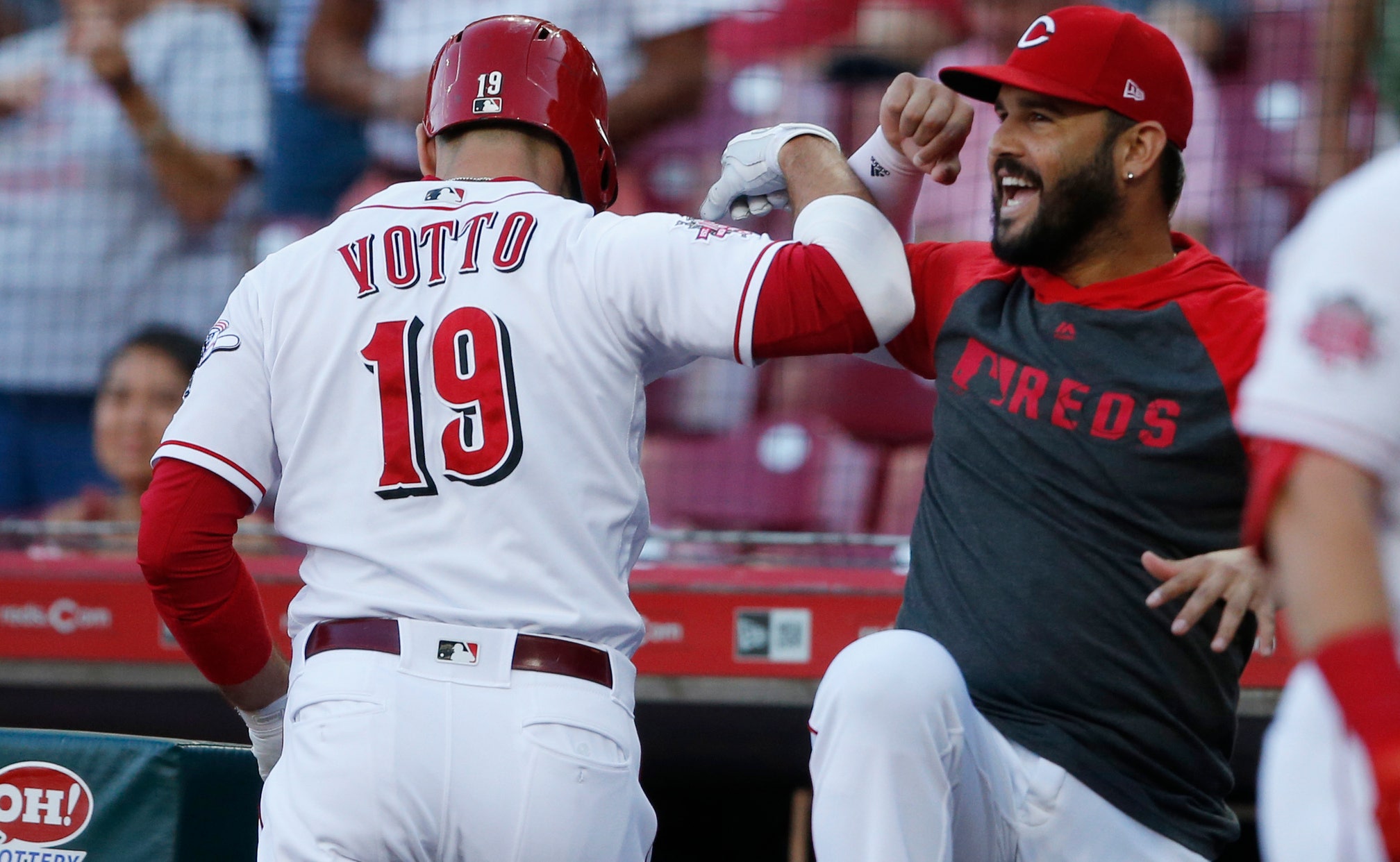 CINCINNATI (AP) — With a homer, a win and an appearance in the outfield, Michael Lorenzen pulled off a feat last accomplished by The Babe. Cincinnati's versatile reliever also blocked the Phillies from gaining ground in the playoff chase.

That last part stung the most for Philadelphia.

Lorenzen hit a two-run homer in the eighth inning Wednesday night as the Reds pulled away to an 8-5 victory. He got his first win and first homer of the season. He also finished the game playing center field.

The last player to get a victory, hit a homer and play outfield in the same game was Babe Ruth for the Yankees on June 13, 1921, according to STATS.

"That's pretty exciting," said Lorenzen, who has seven career homers. "I'm going to have to look into what Babe Ruth would be making today and sit down with (the front office). It's one of those funny little baseball stats. I'm definitely honored to be part of that. It's cool to be part of a Babe Ruth stat."

The Phillies had their three-game winning streak snapped. They also slipped to three games behind the idle Cubs for the final NL wild card. Chicago begins a four-game series in Milwaukee on Thursday.

"Right now we're in the race, and it stings a little bit," said starter Aaron Nola, who lasted only four innings.

Joey Votto homered and had an RBI double off Nola as Cincinnati surged ahead 5-0, but the Phillies' resurgent offense caught up. Logan Morrison and J.T. Realmuto had two-run homers off Trevor Bauer, who has only one victory since coming to Cincinnati in a trade with Cleveland.

Jay Bruce tied it with his third career pinch-hit homer in the seventh off Lorenzen (1-4), rounding the bases to a "BRUUUUCE" chant from the crowd of 13,448. Bruce played more than eight seasons in Cincinnati and has 137 homers at Great American Ball Park, second only to Votto.

Jose Iglesias connected for his first career pinch-hit homer off Jose Alvarez (3-4) in the bottom of the inning to break the tie. Lorenzen connected off Blake Parker in the eighth, then moved to center field with Raisel Iglesias pitching the ninth for his 29th save in 34 chances.

"I told him I underestimated his ability," Reds manager David Bell said. "I've never seen anything like it. To have the athletic ability to do something like that is something I have to get used to."

Nola fanned six in four innings, giving him 200 strikeouts for the season. He's the ninth Phillie — and the youngest at age 26 — to have multiple 200-strikeout seasons. Nola fanned 224 last year.

Nola struggled with his breaking pitches in his shortest outing since May 13.

"I think what's most frustrating is we had an opportunity to pick up Aaron tonight," manager Gabe Kapler said. "He's picked us up so many times along the way, been a rock and a foundation, carried us in many ways."

Bauer pitched on short rest for only the fifth time in his career and lasted five innings. Bauer is 1-5 in seven starts with an 8.23 ERA since arriving in a trade for Yasiel Puig.

"I'm slamming my head against a brick wall," Bauer said. "I think I've been the unluckiest pitcher in baseball the last two months."

Phillies: Corey Dickerson hurt his left foot while hitting a single in the fifth inning and left the game after reaching first base. X-rays were negative. ... Jean Segura fouled a pitch off the plate in the eighth and the ball bounced up and cut his lip. He stayed in the game and popped out.

Reds: Catcher Kyle Farmer went on the 10-day injured list with a strained left oblique. Infielder Jose Peraza was recalled from Triple-A Louisville. ... Center fielder Nick Senzel was a late scratch with a sore right shoulder. ... Alex Blandino left after getting hit by a pitch on the left arm in the eighth.

Adam Haseley reached over the wall in center to rob Freddy Galvis of a homer in the eighth.