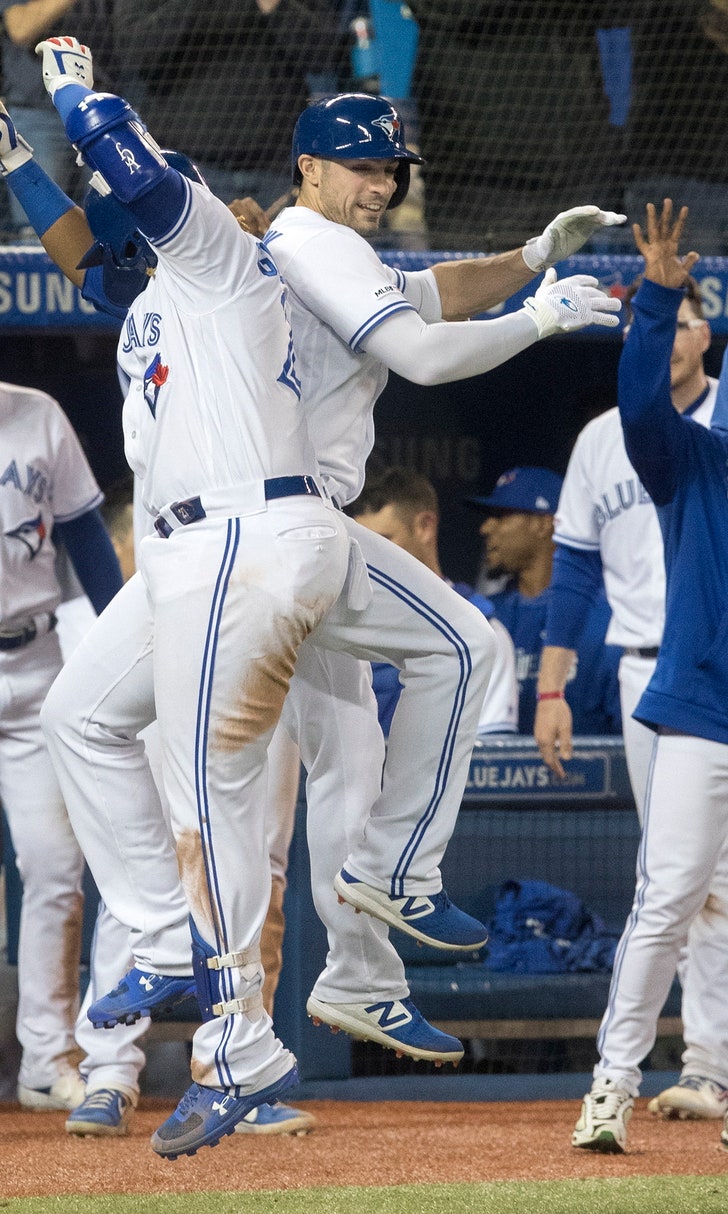 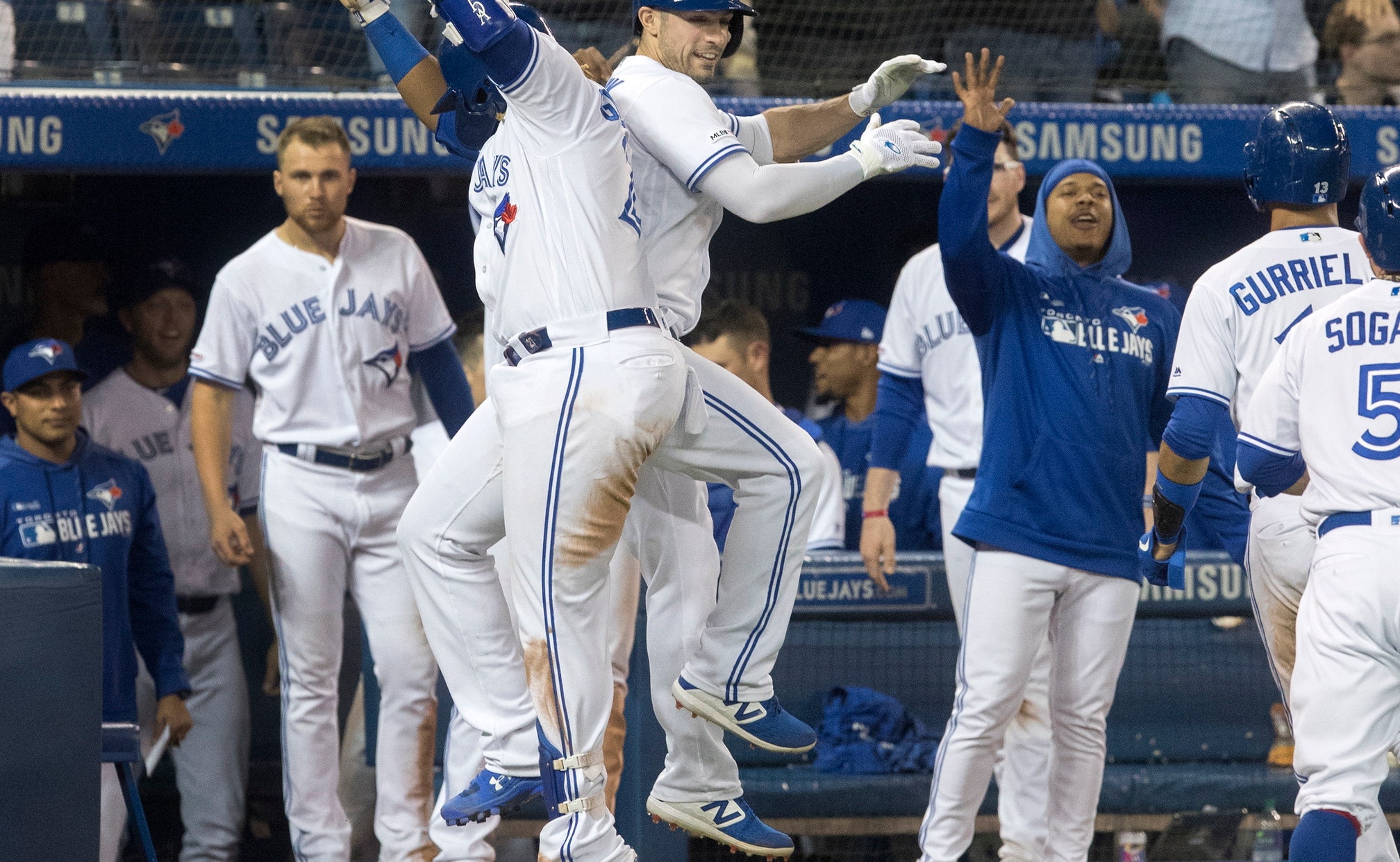 Vladimir Guerrero Jr. hit a go-ahead, three-run homer off Britton in a five-run eighth inning, Randal Grichuk had a pair of homers and the Toronto Blue Jays rallied to beat the Yankees 11-7, sending New York to its first three-game losing streak since early April.

Britton (2-1) entered with a season-high 13 1/3 scoreless innings streak, then allowed three runs in one inning in blowing a save opportunity for the second time this season.

"Britt's been so good, so dominant, really," manager Aaron Boone said. "A good hitter got one on him. Simple as that."

Guerrero's home run off on a Britton sinker was the seventh in 33 games for the 20-year-old, who debuted April 26.

"He's a good young hitter but, if I make a good pitch, I can get him out," Britton said. "It's definitely frustrating."

New York had been 32-0 when leading after seven innings.

"It's part of the game," Boone said. "Even the best of 'pens it's going to happen every now and then, you've going to have the blip."

Toronto trailed 7-4 in the seventh but closed against Jonathan Holder on a two-run, two-out double by Teoscar Hernández, who was recalled from Triple-A Buffalo. Both runs were unearned because of a throwing error by shortstop Torres on Guerrero's leadoff grounder.

A poor throw by Urshela, one of two errors by the third baseman, led to an unearned run in the fifth.

AL East-leading New York had not lost three in a row since a season-high four-game skid from April 8-12.

James Paxton allowed four runs over 4 2/3 innings and 83 pitches in his second start back from the injured list. Adam Ottavino followed and Tommy Kahnle stranded the bases loaded in the sixth by striking out Lourdes Gurriel Jr.

Yankees center fielder Aaron Hicks, who did not make his season debut until May 15 because of a back injury, was down briefly after leaping into the wall in an unsuccessful attempt to catch Grichuk's eighth-inning homer.

Grichuk has three home runs in the series, raising his season total to 12. He had a two-run homer in the first off the Canadian-born Paxton.

DJ LeMahieu hit a three-run homer and had four RBIs, and Gary Sánchez had a solo drive for New York. Sánchez has an AL-leading 19 homers, one more than the previous mark for Yankees catchers before the All-Star break, set by Yogi Berra in 1956.

"Just one of those days where I didn't quite have the bite on my breaking stuff and wasn't locating my fastball very well," he said.

Angel Hernandez, the plate umpire in Tuesday's series opener, left to join the crew handling the Mets-Giants series in New York, where he replaced Tom Hallion (concussion). Hallion was hit on the mask by a foul ball Tuesday. Ryan Additon joined the crew in Toronto and worked third base.

Toronto used its 32nd round pick in the amateur draft to selectrRHP Braden Halladay, a son of the late Hall of Famer and former Cy Young Award winner Roy Halladay. The elder Halladay wore jersey number 32 with Toronto, which retired the number after his death. The younger Halladay will not sign and plans to attend Penn State.

Yankees: RHP Dellin Betances (right shoulder) felt good after facing hitters for the first time in almost three months, throwing 20 pitches to minor leaguers in a simulated game. He's expected to throw a bullpen session Friday before facing hitters again. ... OF Giancarlo Stanton (left biceps strain, left shoulder) went 1 for 5 in an extended spring training game. Stanton did not run out of the batter's box. ... Boone said OF Aaron Judge (strained left oblique) could return by the time the Yankees face the Boston Red Sox in London on June 29 and 30. ... Boone said INF Troy Tulowitzki has returned home for a "couple of days" as he attempts to recover from a strained left calf. ... Hicks was held out of the starting lineup but came on to play defense in the eighth.