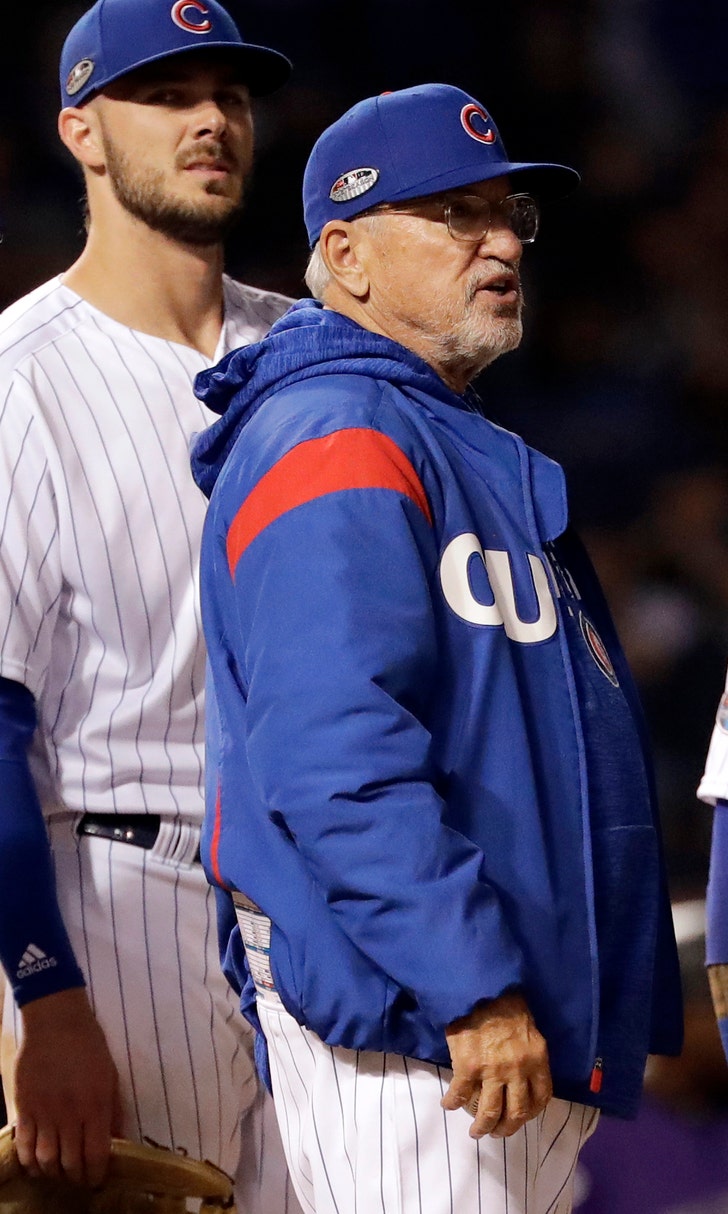 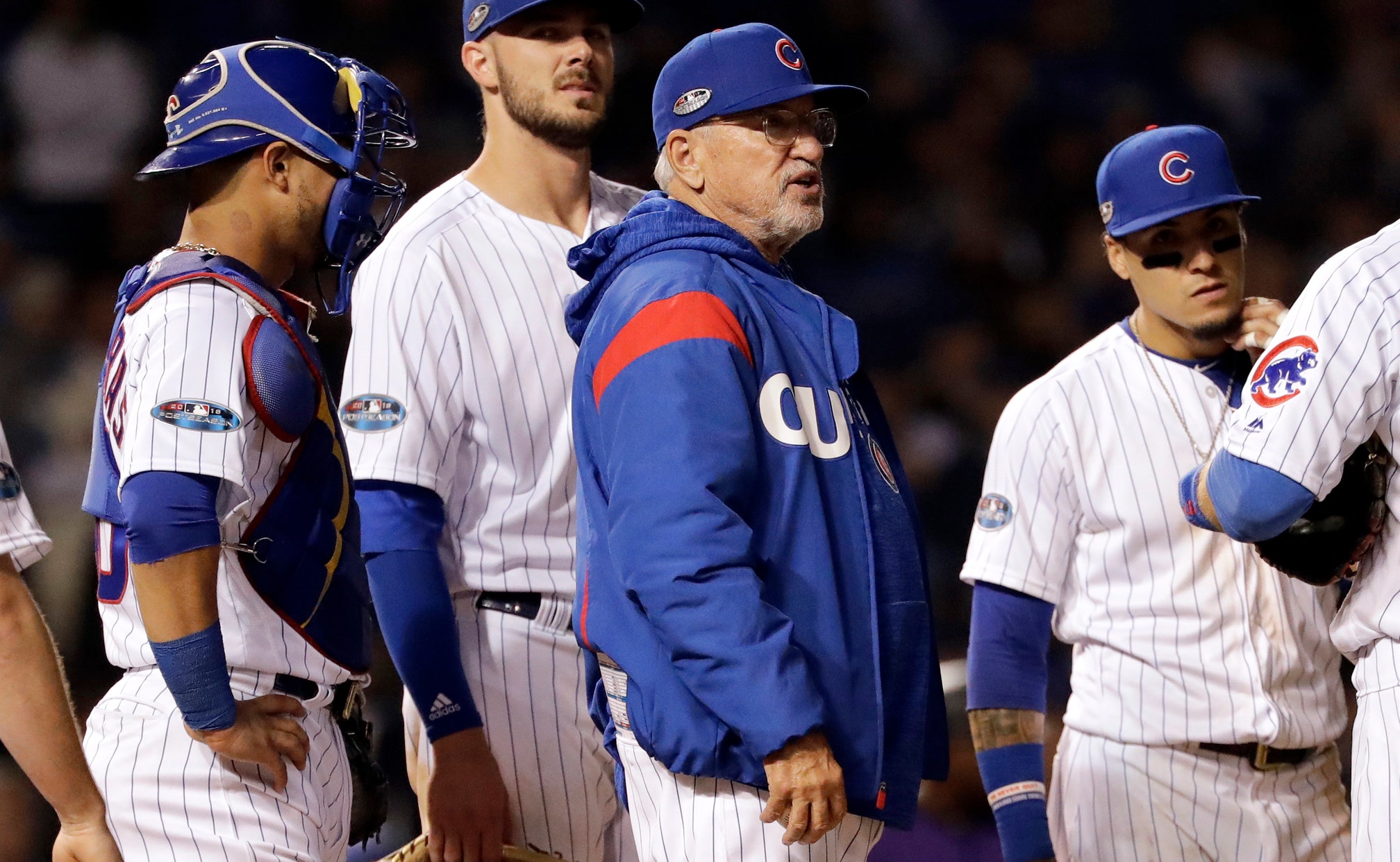 Epstein: Maddon to return for fifth season as Cubs manager

CHICAGO (AP) — The Chicago Cubs expect to make changes after an early playoff exit. Just not in the manager's office.

"He's the manager of this team and I'm very happy about that," Epstein said.

Maddon has one year left on his contract. Though there are no ongoing discussions about an extension, Epstein insisted they have a "terrific" working relationship.

"We don't agree all the time about baseball issues, and that's the way it should be," Epstein said. "I don't want a yes man as the manager."

Maddon has a 387-261-1 record with playoff appearances in each of his four seasons in Chicago. The Cubs have more wins during that span than any other team, with three trips to the NLCS and a World Series championship in 2016 that ended a drought dating to 1908.

Chicago finished 95-68 this season, blowing a five-game lead over Milwaukee in the NL Central before losing a tiebreaker to the Brewers for the division title at Wrigley Field. Chicago was eliminated by Colorado with a 2-1, 13-inning defeat in the NL wild-card game at home Tuesday.

While Maddon appears to be staying on, shortstop Addison Russell might have played his final game for the Cubs.

Russell accepted a 40-game suspension Wednesday for violating Major League Baseball's domestic violence policy after a series of allegations made by his ex-wife. Epstein said he wasn't sure what the odds were of Russell playing another game for Chicago.

As for Maddon, there were some hints during the regular season that he and management might not be on the same page, fueling speculation that he might be on the way out if the Cubs don't make a deep playoff run. Epstein suggested last month that using closer Brandon Morrow in a third straight game June 2 might have led to the bone bruise in his right elbow that ultimately ended his season, and Maddon initially did not read the blog post by Russell's ex-wife accusing the shortstop of domestic violence.

Epstein said the two have not yet discussed a contract extension, meaning there's a chance Maddon goes into next season with an expiring deal.

"It's becoming more common in the game," Epstein said. "I think you've seen it in other places and it hasn't always led to a big distraction. ... The big picture is we haven't made any determination on that yet."

He also said he hasn't gotten any indications that Maddon might be interested in managing a different team with a vacancy. Mike Scioscia stepped down after 19 seasons as manager of the Los Angeles Angels, and Maddon was his bench coach on the 2002 championship team.

"When we get together and communicate, we'll discuss anything and everything," Epstein said.

One big topic figures to be how the Cubs move forward after a difficult and frustrating season. While most teams would consider 95 wins and a franchise-record fourth straight playoff appearance a rousing success, it doesn't quite feel that way for a franchise that for decades was defined by heartache and losing.

"I think it's important for us to be proud of what we've been able to accomplish," Kris Bryant said.

The Cubs managed just two runs over 22 innings in losing the tiebreaker and wild-card games, a weak finish for a team that struggled at the plate for a big chunk of the season. Though Javier Baez emerged as an MVP candidate, too many players did not perform the way they expected. Injuries hit the team hard, too.

The offense, Epstein said, "broke somewhere along the lines." Chicago finished fourth in the National League in runs but was held to one or zero in 39 regular-season games. More than anything, the Cubs didn't have the must-win approach to each game they showed two years ago on the way to the championship.

"You learn from losing," Jon Lester said. "Obviously, that's not what anybody wants to hear, but I feel like this will be good for us moving forward."

Epstein echoed that, adding he doesn't see a "fatal flaw" in the clubhouse.

He wouldn't say if there will be coaching changes. But he did say the Cubs need to fix the offense.

Having a healthy Bryant would help. The 2016 NL MVP set career lows in games played (102), batting average (.272), home runs (13) and RBIs (52) while making two trips to the disabled list because of inflammation of his left shoulder. Epstein does not think he will need surgery.

Epstein also said he "absolutely" wants Cole Hamels back. The Cubs hold a $20 million option on the four-time All-Star who gave the rotation a huge boost following a trade from Texas in late July.