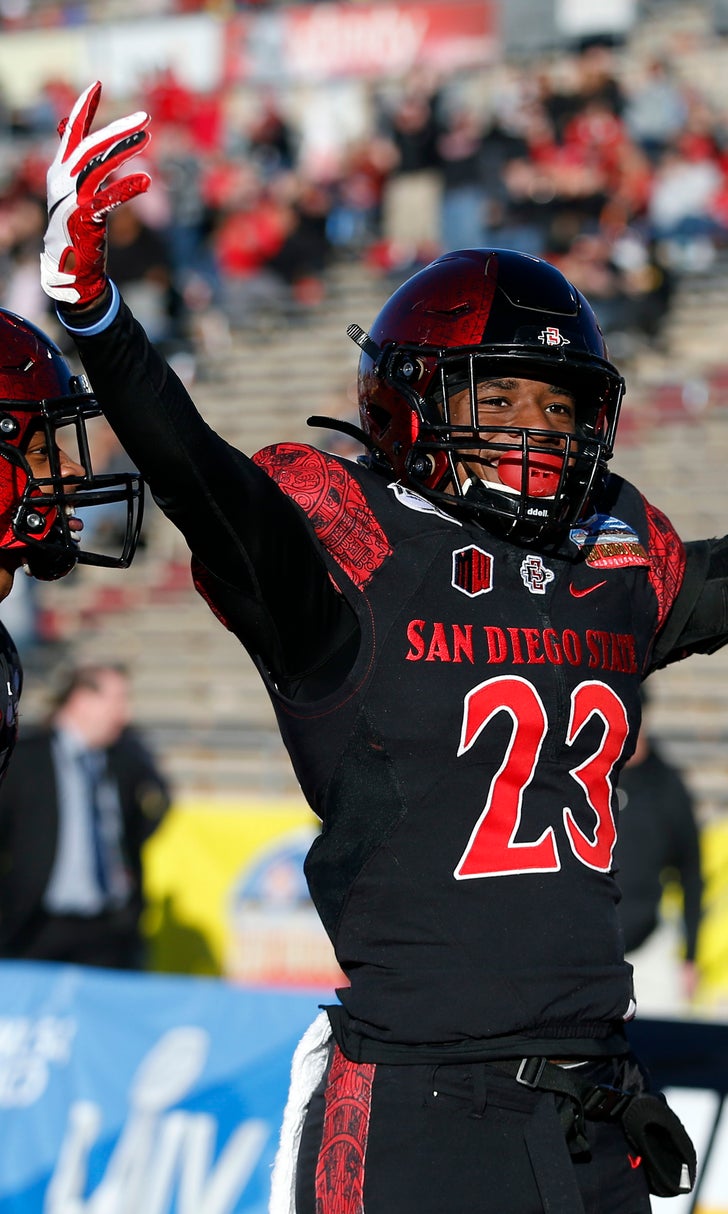 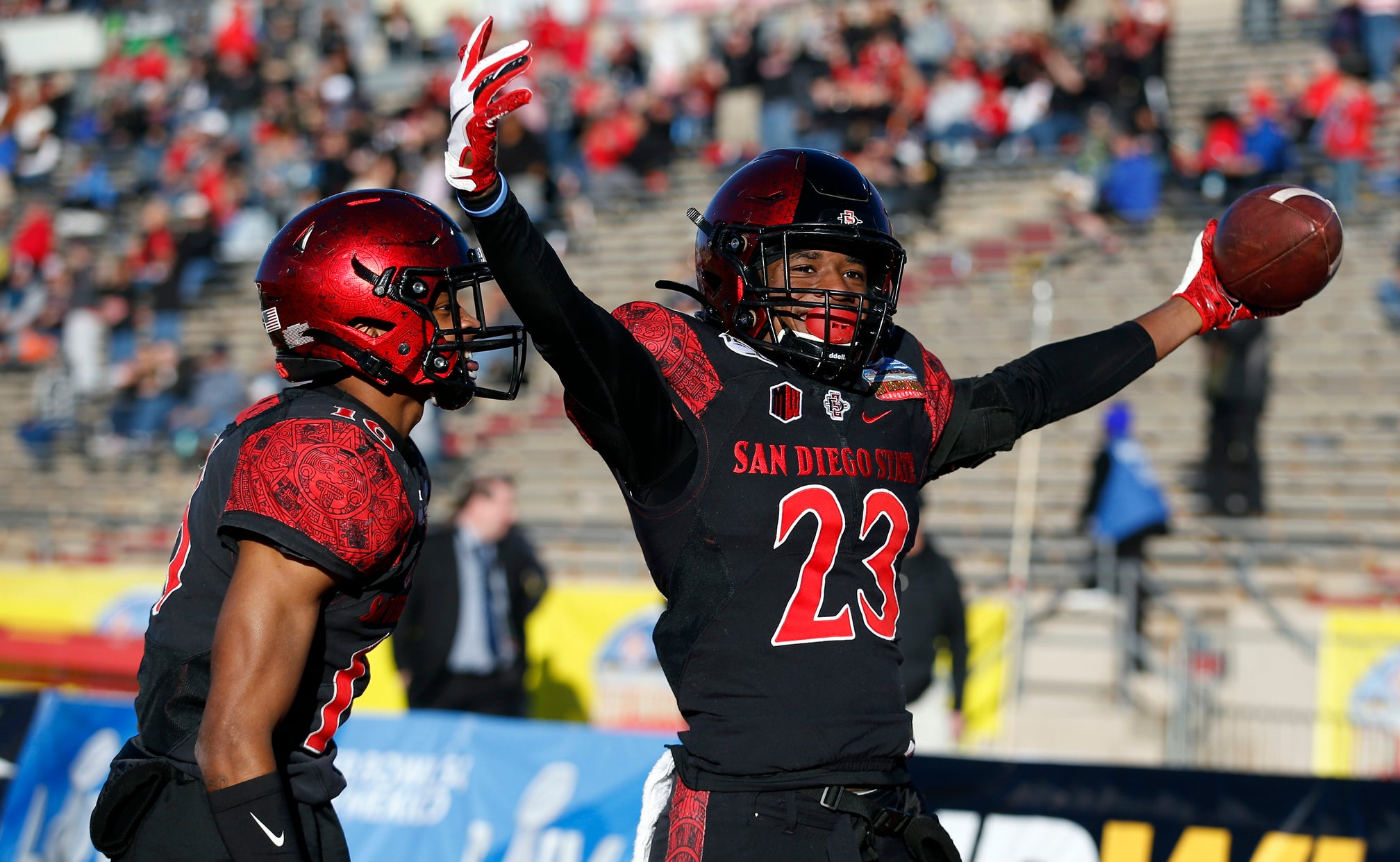 LAS VEGAS (AP) — Jacob Eason threw for 210 yards and a touchdown and Washington sent out coach Chris Petersen with a 38-7 victory over No. 18 Boise State in the Las Vegas Bowl on Saturday night.

Richard Newton rushed for 69 yards with a short touchdown run and threw a touchdown pass for the Huskies (8-5). They capped an erratic season with a dominant finale for Petersen — who left Boise State to coach Washington — after he announced Dec. 2 he was stepping down.

Jaylon Henderson threw for 48 yards and a touchdown for the Broncos (12-2). They lost for the first time in five appearances in the Las Vegas Bowl. Henderson replaced Hank Bachmeier in the second half after the freshman threw his second interception.

Jordan Byrd ran for a career-high 139 yards and a touchdown to help the Aztecs (10-3) cap their 10th straight bowl appearance with a victory. San Diego State opened 7-1 record, then dropped two of its last three conference games to fall out of contention for a Mountain West title game berth

It was a homecoming for San Diego State coach Rocky Long. He last won the New Mexico Bowl in 2007 as New Mexico's coach.

San Diego State prevented Central Michigan (8-6) from sustaining consistent drives, with quarterback Quinten Dormady under pressure and forced to throw into tight coverage. He passed for 164 and threw three interception. Central Michigan's Jonathan Ward, who came into the game with 1,082 yards and 15 touchdowns, was held to 7 rushing yards and 26 yards receiving.

BOCA RATON, Fla. (AP) — Chris Robison passed for 305 yards and two touchdowns and Florida Atlantic scored two touchdowns in a 24-second span late in the first half to take control in the Boca Raton Bowl.

It was FAU’s first game since Lane Kiffin left the Owls to take over at Ole Miss — and the Conference USA champions, playing on their home field, didn’t miss a beat under interim coach Glenn Spencer.

James Charles ran for two touchdowns for FAU (11-3), which tied a school record for wins in a season and improved to 4-0 in bowl games. Rashad Smith ran a fumble back for a score in the third quarter to help FAU blow the game open. Brandon Robison completed 27 of 37 passes for FAU.

MONTGOMERY, Ala. (AP) — Layne Hatcher passed for 393 yards and four touchdowns, including a late 13-yarder to Jonathan Adams, and Arkansas State beat Florida International in the Camellia Bowl.

The Red Wolves (8-5) came back to life offensively for a final big drive, highlighted by All-American and game MVP Omar Bayless's 52-yard catch down to the 12. Then they had two interceptions in the final minutes.

The Panthers (6-7) converted a fourth-and-5 play with a pass to Austin Maloney, who matched the huge game of Bayless. But James Morgan's overthrow on the next play was intercepted by Jeremy Smith, who returned it 21 yards into FIU territory.

Flames coach Hugh Freeze, who began his first season coaching Liberty from a hospital bed in the press box following back surgery Aug. 16, got his 50th career victory. Liberty (8-5) joined Georgia Southern and Appalachian State as the only teams to move from FCS to FBS and win a bowl game in its first season of eligibility. Georgia Southern finished 7-6.

NEW ORLEANS (AP) — Darrynton Evans ran for 157 yards, including a 31-yard touchdown after he scooped up a fourth-down fumble, in Appalachian State’s win over UAB in the New Orleans Bowl.

The Mountaineers (13-1) scored twice in the third quarter on quarterback fumbles.

Johntson, passed for 298 yards and two touchdowns for UAB (9-5) in his first start since injuring his knee Nov. 2 at Tennessee.

The game marked the head coaching debut for Appalachian State's Shawn Clark, who took over after Eli Drinkwitz was hired by Missouri.

Thomas Hennigan caught two touchdown passes and Zac Thomas finished with 142 yards and two TDs passing for the Mountaineers, who were the Sun Belt Conference champions and finished the season on a six-game winning streak.