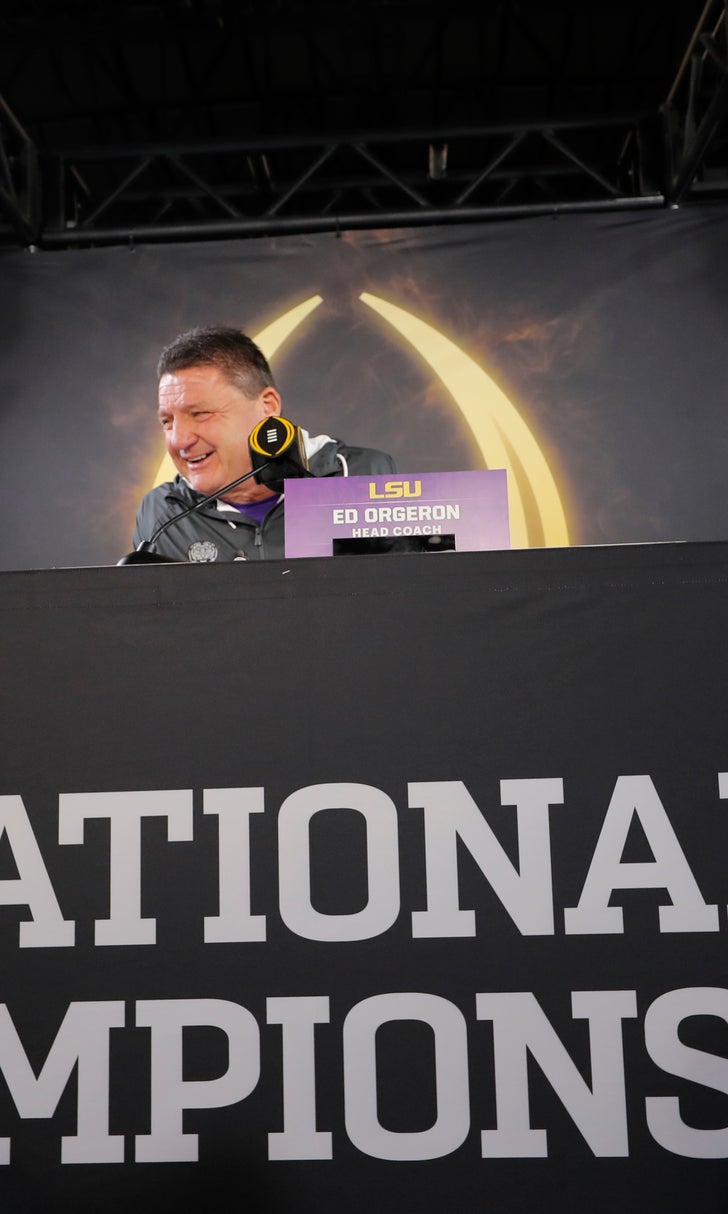 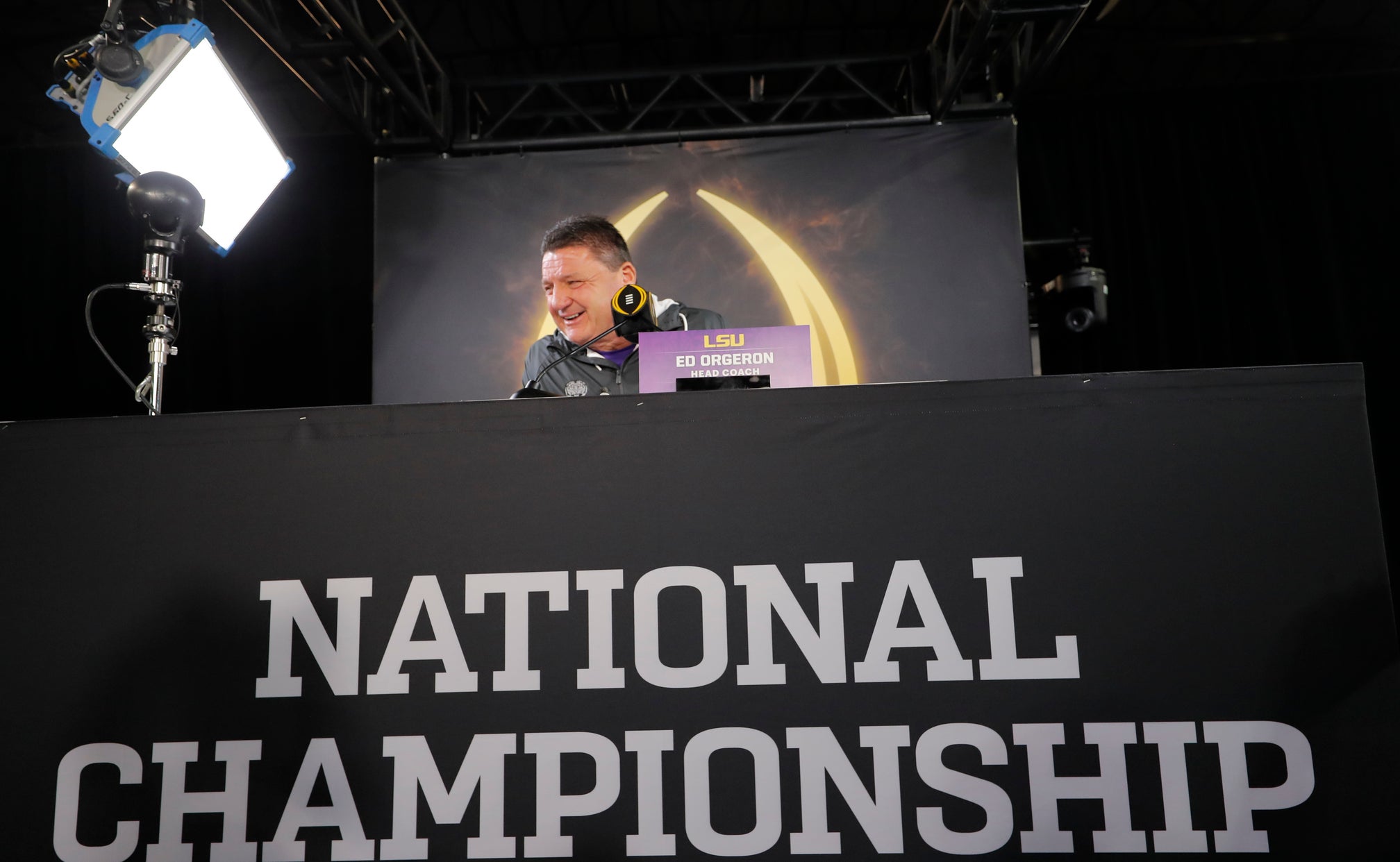 LSU's Brady intends to stay; Orgeron believes he will

NEW ORLEANS (AP) — LSU assistant Joe Brady, credited as the catalyst to the Tigers' offensive transformation, intends to remain at the school and coach Ed Orgeron noted both sides are close to finalizing a plan that will make that happen.

Brady drew a huge crowd of reporters Saturday during LSU's media day session for the College Football Playoff championship game. The 30-year-old passing game coordinator and receivers coach is in his first season at LSU, but is already drawing interest from other schools and NFL teams.

Brady said preparing to face No. 3 Clemson on Monday has kept him too busy to be distracted by any speculation about his future. He has hired an agent to handle questions about what's next for him.

"From my standpoint, whether talks are happening with other people, for me I have no idea," Brady said.

A year ago, Brady was working as an analyst with the New Orleans Saints. Orgeron hired him and paired him with veteran offensive coordinator Steve Ensminger, tasking them with revamping the offense.

The result has been a record-breaking performance by Heisman Trophy winner Joe Burrow and the top-ranked Tigers. Burrow has thrown a Southeastern Conference record 55 touchdown passes.

Brady earns $410,000, but a big raise and title promotion is likely on the horizon regardless of where he is working.

"You want guys coming after your coaches," Orgeron said. "That means you're doing something right. I believe in Joe, I believe in (athletic director) Scott Woodward. Scott put a plan in place a long time ago. I do believe that we're almost finalized with the plan. I do believe that Joe's going to be a factor, but you know in coaching football, anything can happen.

“But I do believe the talks we've had with Joe are very, very positive and he's going to be at LSU.”

Clemson backup quarterback Chase Brice has been getting a lot of questions about his future beyond Monday's championship game against LSU.

“After the game, i'll probably go back to the hotel. I might get some McDonald's. We might deserve some McDonald's after that. And then fly home, and go to class, sadly. That's about it. Get some time with my family during our off time," said Brice, a junior who is set to graduate in May with a degree in sports management.

What people are really interested in is whether Brice will transfer to another school. As a graduate, he would be immediately eligible next season.

“Haven't really thought of that," Brice said. “I know there's been some things leaked out. Speculation and fans and people who have seen me play wanting to explore other options. But as far as that goes, really just focused on graduating. Really focused on that and in the offseason just improving.”

Brice arrived at Clemson in a class with five-star quarterback prospect Hunter Johnson the year before Trevor Lawrence arrived. Clemson also had Kelly Bryant, who was the starter in 2017.

“I was told I was crazy to go to Clemson when I committed after junior season,” Brice said.

Johnson transferred during the spring of 2018 and Bryant left four games into the season when Lawrence won the job.

That made Brice the backup. He has played sparingly, but had one memorable and important moment during the Tigers' 29-game winning streak.

Brice came off the bench against Syracuse in 2018 after Lawrence was knocked out of his first start with a head injury, and rallied the Tigers to a victory.

This season, Brice has only played in mop-up duty this season, completing 58% of his passes for 581 yards and four touchdowns.

Tony Elliott and Jeff Scott have a long history at Clemson. They were fellow receivers with the Tigers before becoming young assistants starting out to now working as co-leaders of one of the country’s most consistent offenses.

Elliott is sure he’ll miss his longtime friend, he’s just trying not to let it be this week.

Scott is leaving Clemson after five seasons sharing the offensive coordinator job with Elliott to become South Florida’s head coach. Elliott and Scott have attempted to keep emotions out of preparations as they get ready to try for a third national title since both were promoted after the 2014 season.

“The future is going to come Monday night after the game," Elliott said. “Right now, we’re focused on doing what we’ve always done to help these young men.”

Scott has counted down the milestones during their two weeks preparing for the game, ending with his final trip from campus Friday with the team leaving for New Orleans. He will head to Tampa after the game to begin his new job with the Bulls.

“It has not been easy,” Scott said. “I’ll catch myself when Coach Swinney shows videos to the team and I’ll have to kind of wipe my eyes watching some of the memories we had.”

Elliott knows there’s an adjustment without Scott as a co-coordinator, but said “the emotion I got for him is joy.”