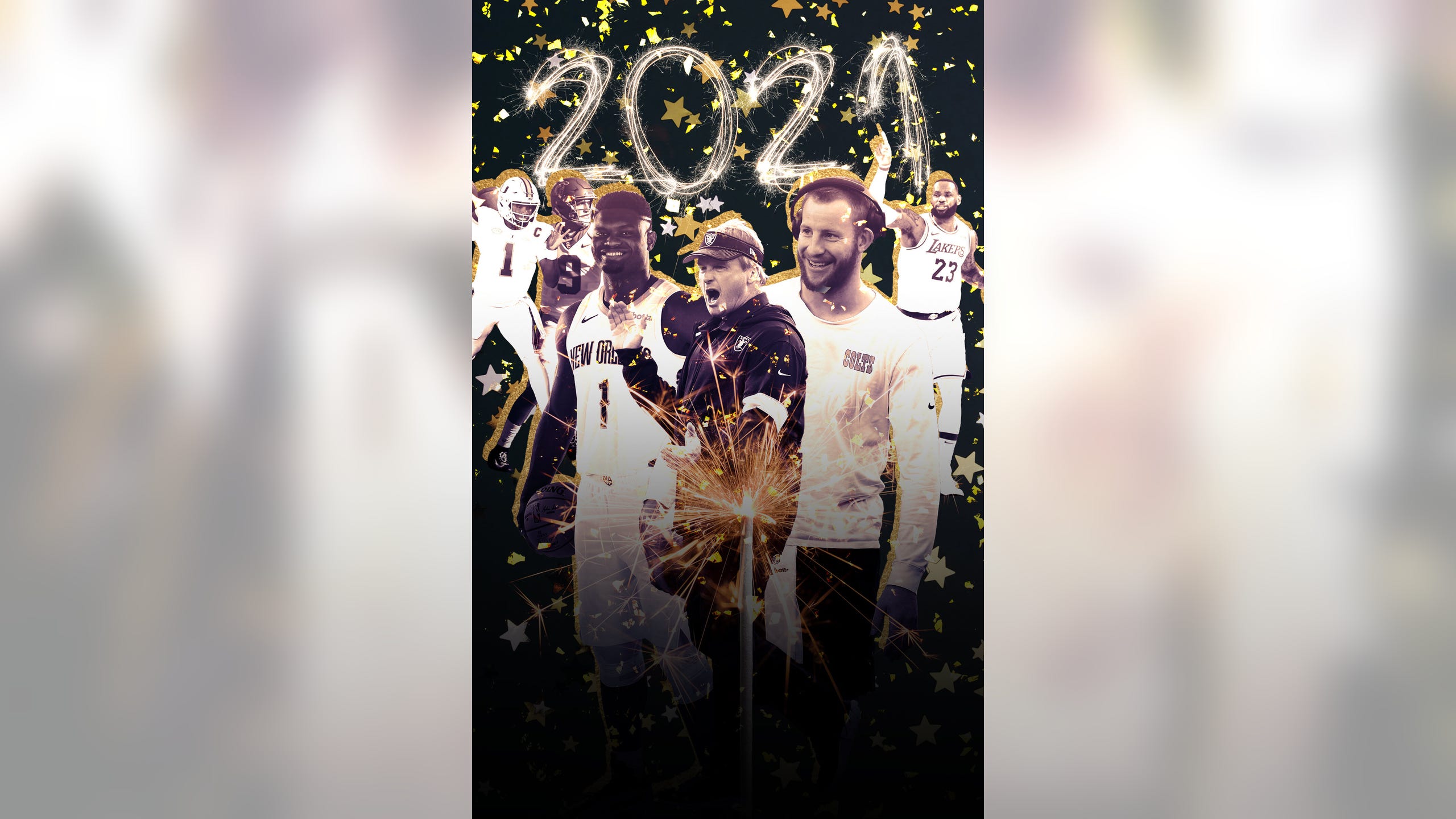 It's been a year unlike any other, both inside and outside the realm of sports. But each New Year brings a spirit of optimism and hope.

As we flip the calendar to 2021, Colin Cowherd looked ahead to some of the biggest storylines he's hoping come to fruition across the sports landscape. 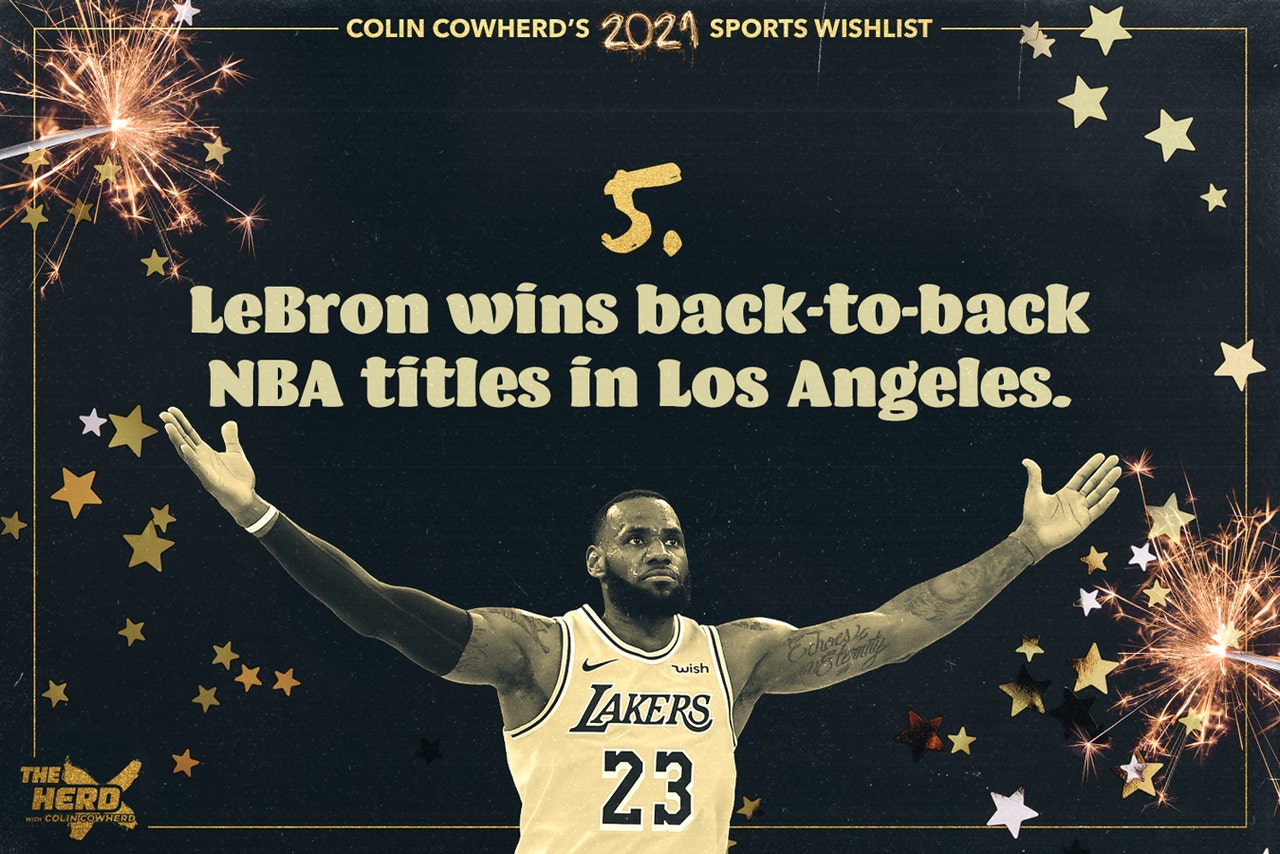 The history: The GOAT debate in NBA circles has essentially narrowed down to Michael Jordan vs. LeBron James. And even if there are other contenders in the mix, LeBron is currently the only candidate that can still add to his legacy.

With one title as a Los Angeles Laker already under his belt, along with a pair as a member of the Miami Heat and a ring won with the Cleveland Cavaliers, how far would back-to-back championships go to bolster LeBron's credentials?

The prospect is a tantalizing one for Cowherd.

Cowherd's thoughts: "Because it's going to force MJ loyalists to acknowledge Michael couldn't win with a second coach or a second team ... If he wins two in Miami, one in Cleveland, two in Los Angeles ⁠— man, even if you love MJ, you're going to have to acknowledge some things I don't think you want to acknowledge." 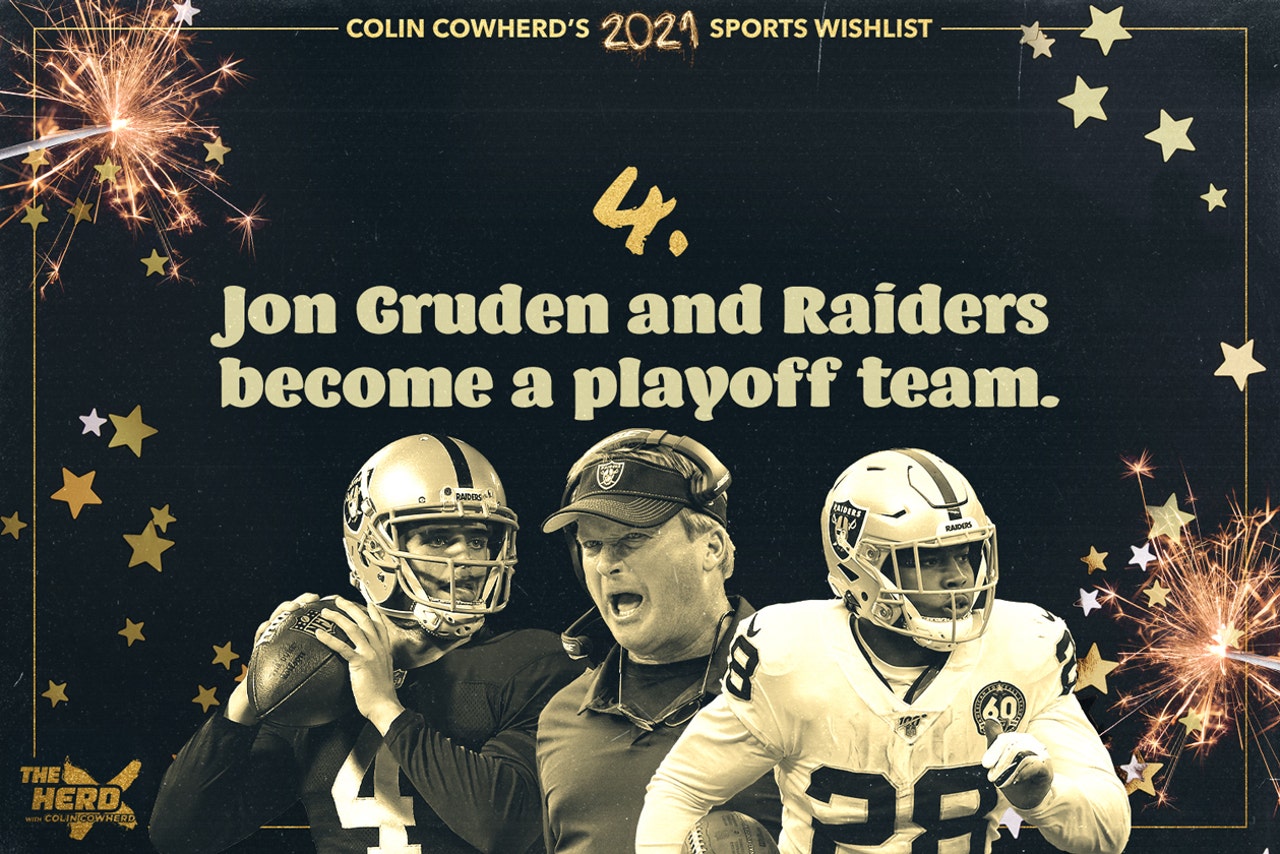 The history: It's been quite a postseason drought for the newly-minted Las Vegas Raiders, who haven't tasted playoff success since their Super Bowl run in 2002 ⁠— which resulted in a loss in the championship. Hopes were high coming into this season, with fresh new digs in a state-of-the-art stadium off the Las Vegas Strip, but the 7-8 Raiders flamed out and were eliminated from postseason contention last week.

In the third year of a 10-year, $100 million contract for Jon Gruden, Cowherd's ready for the Raiders of old to return. 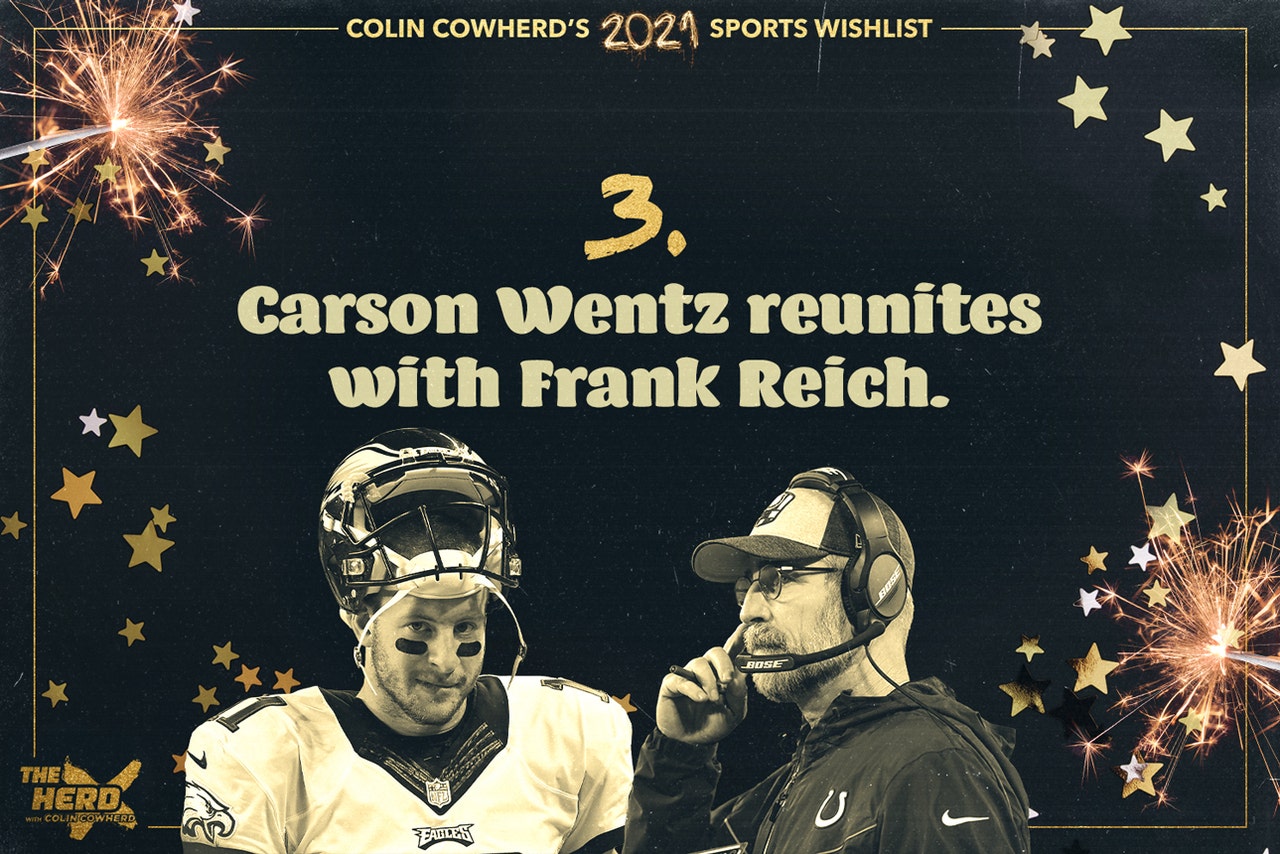 The history: The downfall of Carson Wentz this season with the Philadelphia Eagles has been well-documented. Philly benched him in favor of rookie Jalen Hurts in Week 14, and now the questions about Wentz's future are the talk of the town. In two seasons with Frank Reich, who was Philadelphia's offensive coordinator, Wentz put up a combined 49 touchdowns and 21 interceptions, along with more than 7,000 passing yards. Reich, now the head coach of the Indianapolis Colts, is hoping to get his team over the playoff hump while working with a 39-year-old Philip RIvers on a one-year contract.

Wentz has regressed, no doubt about it. However, a reunion with his former offensive coordinator could be just what the doctor, or at least Cowherd, ordered.

Cowherd's thoughts: "The league's better when big, strong, athletic quarterbacks with big arms are winning. And when they were together, he was an MVP-level player ... He has never been the same since losing Frank Reich." 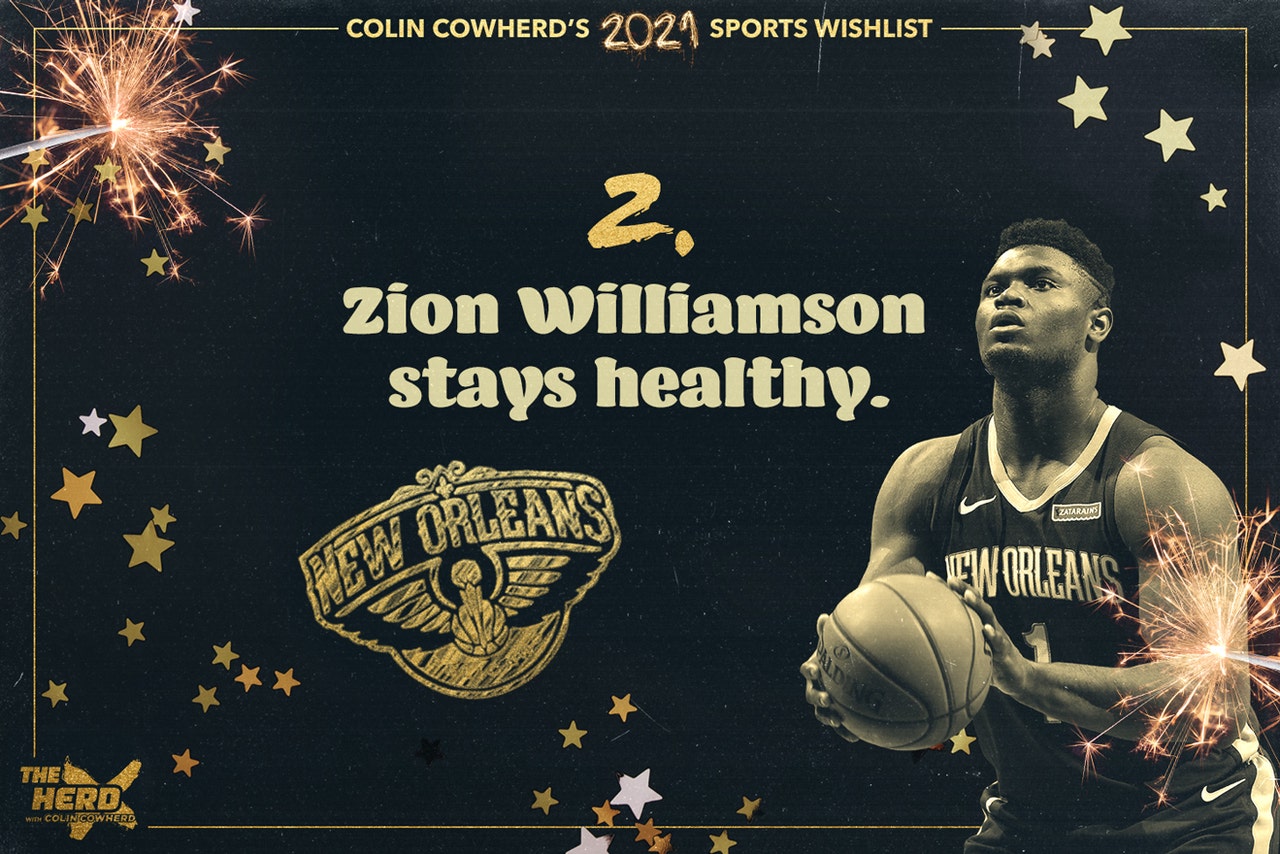 The history: Zion Williamson is an absolute force. At 6'6" and 284 pounds, he's remarkably athletic and it takes nanoseconds to see why the New Orleans Pelicans took him with the No. 1 pick in the 2019 NBA Draft. Unfortunately, injuries have hampered Williamson early in his career, both at the collegiate and professional levels.

But when he's on the floor, he's must-see material, and Cowherd's holding out hope that Williamson stays injury-free in 2021 and beyond.

Cowherd's thoughts: "I can't think of a college basketball player in the last 10 years that made me want to watch the Summer League. I love this kid. I hope he's healthy for a long stretch." 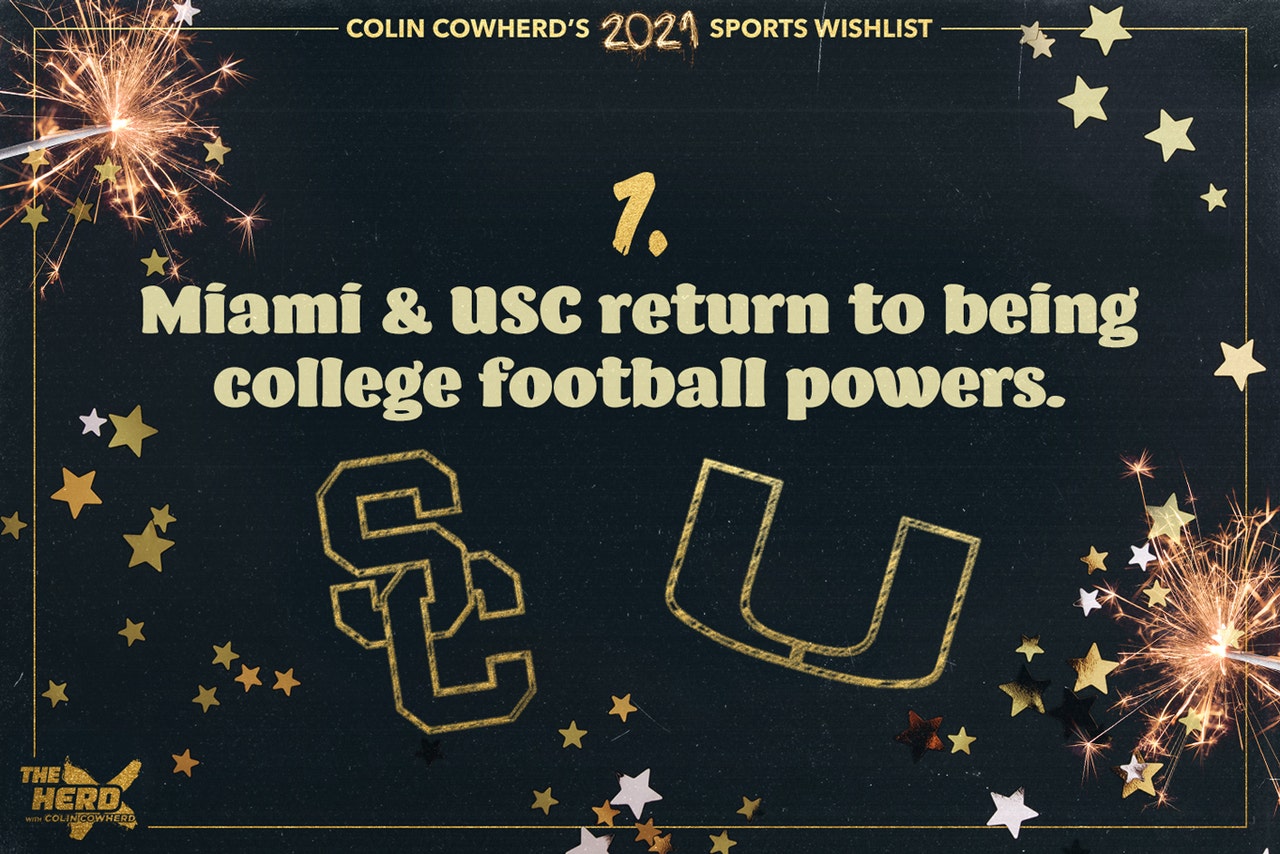 The history: With 16 claimed national titles between the two programs ⁠— five for the Miami Hurricanes and 11 for the USC Trojans ⁠— it's tough to argue with the history of these two teams. Their most recent glory days came all the way back at the beginning of the millennium, though, in 2004 for USC and 2002 for Miami. It's been a longer drought for Miami ⁠— USC still enjoyed success with Pete Carroll in the mid-to-late 2000s ⁠— but neither program has finished in the top two of the AP poll since 2005.

While the charms of Tuscaloosa, Alabama, and Death Valley in Clemson, South Carolina are quaint, Cowherd's ready for some bigger, more cosmopolitan venues like Los Angeles and Miami to join the discussion.

Cowherd's thoughts: "I miss USC and Miami. They were cool ... College football needs a big city or two. And Miami and LA? They're cooler than Tuscaloosa."

Check out Cowherd's full breakdown of his 2021 wishlist below: