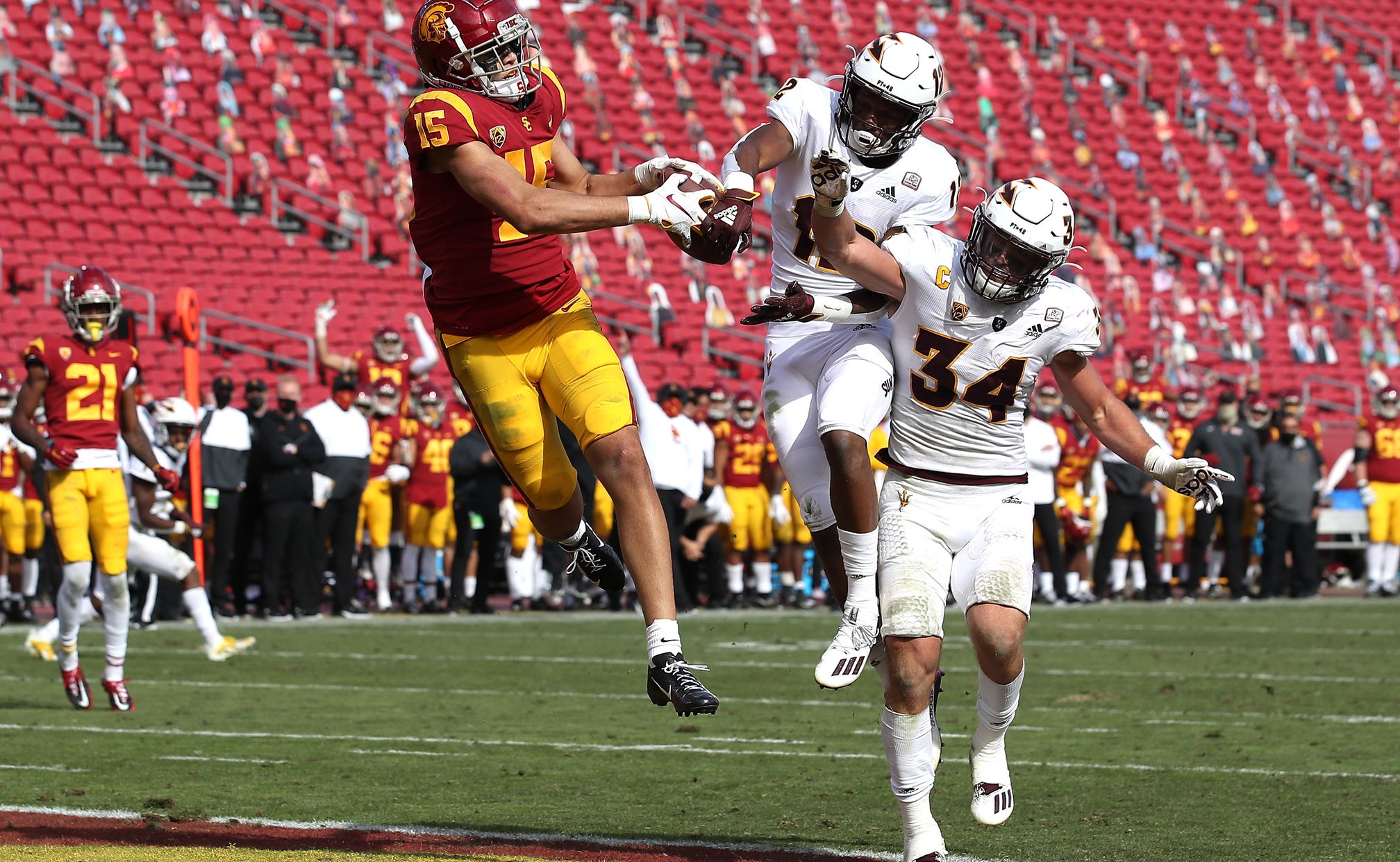 Week 10 featured all Power 5 conferences back in action, with No. 20 USC vs. Arizona State kicking off the Pac-12's return, followed by a big-time ACC matchup between No. 4 Notre Dame and No. 1 Clemson.

Check out the top moments from the biggest Saturday of college football so far this season! (All odds provided by FOX Bet.)

Irish eyes on an upset

Even without Trevor Lawrence in action, Saturday night's bout between the Tigers and Fighting Irish lived up to the hype, as Notre Dame found paydirt in the final minute to force extra time against the top-ranked team in the land.

A Kyren Williams rushing TD in double overtime gave the Irish the win, as Clemson suffered its first regular-season loss since 2017.

D.J. with the deep cuts

While it came in a losing effort, D.J. Uiagalelei was sensational on Saturday, getting the scoring started for Clemson with a 53-yard bomb.

And that was just the start of a record-setting night for the Tigers QB.

It was hard to tell Uiagalelei is a freshman quarterback with how he handled his first true road game in South Bend.

It certainly wasn't enough vs. Justin Fields and Ohio State, but you have to love Rutgers' dedication to the lateral-based trickeration.

Having a Fields day

Speaking of the Buckeyes quarterback, rather than highlight just one play, why not sit back and enjoy a compilation of his monstrous day?

However, USC fumbled the scoring opportunity away – literally – at the goal line.

On the plus side, the Trojans managed to right the ship before things were all said and done vs. ASU.

Indiana quarterback Michael Penix went 7-for-9 on a 60-yard drive down the field, capping it off with a sweet 13-yarder to receiver Miles Marshall for the score.

Cornelius Johnson got his first touchdown of the season via a 37-yard bomb from quarterback Joe Milton to tie it up.

Mr. Robinson is a full-grown man

Texas' Bijan Robinson went 54 yards and pulled out all the stops, including the stiff-arm and savage spin move.

Drake London will not go down

Indiana quarterback Michael Penix launched another rocket for his second touchdown of the day.

Serving pancakes for that 9 a.m. start

Rachaad White turns on the burners

The Sun Devils' Rachaad White used the quick screen to hit the hole, escape traffic, and take it 55 yards to the house.

Javonte Williams is a cheat code

UNC had 42 first half points courtesy of running back Javonte Williams.

Brandon Joseph will take that

Northwestern's Brandon Joseph picked off Nebraska quarterback Adrian Martinez in the end zone, helping maintain the lead over the Cornhuskers.

Texas quarterback Sam Ehlinger put the Longhorns on top with a 33-yard strike to Jake Smith.

The Hooisers defense is no joke

Michigan's Milton picked a bad time to toss his first interception of the season, as Williams intercepted the pass and returned it 36 yards.

Rushing for a 75-yard touchdown on the first drive has to be the best way to start off a rivalry game.

After falling down 14-0, Kyle Trask connects with Justin Shorter for a 14-yard touchdown pass to get Florida on the board.

Showing off the vertical!

It's not quite the same as "you got Moss'd," but Kyle Pitts went up and over the Georgia secondary to haul in this pass.

Eric Stokes turns this interception into a touchdown to put Georgia back on top, 21-14.

If the ball is thrown in Kyle Pitts' area, only he is coming down with it.

The Florida Gators piled up the points on Georgia, taking a 38-21 into halftime behind four first half touchdown passes from Kyle Trask.

After trailing 14-0, Florida dominated the Bulldogs on both sides of the ball.

Rhamondre Stevenson had Oklahoma in control early over Kansas after this 13-yard touchdown run.

Cincinnati running back Gerrid Brooks had a big day on the ground with 98 rushing yards in the first half, but he also showed off his pass-catching ability.

Bryson Smith of Houston pulled off one of the best catches of the day by simply not giving up on the play.

Maryland has dominated on offense and defense against Penn State, now scoring a touchdown off of a forced fumble.

Something is in the water today, with the Oklahoma State Cowboys becoming the latest team to score a defensive touchdown today.

The Baylor Bears had not just one, but two interceptions in the first quarter.

The third time is a charm for the Baylor secondary, recording three interceptions in the first half.

After a rocky first half, Iowa State found its footing in the third quarter, cutting the Baylor lead to one possession after a Brock Purdy touchdown pass.

Iowa State knotted up the game, 24-24, behind a Breece Hall rushing touchdown.

Why use two hands?

You only need one.

Here are a few final scores from Saturday:

Lead Dawgs
Unbeaten Washington looks to keep its lead in the Pac-12 North when Stanford visits Seattle as part of this week's Super 6.
42 mins ago

Ohio State's Championship Conundrum
The Buckeyes could miss the Big Ten title game through no fault of their own. Urban Meyer offers one thing to keep in mind.
23 hours ago

College Football's Top Plays: Week 13 - Saturday
From Trevor Lawrence's return to a historic debut and much more, check out Saturday's best moments.
5 days ago
those were the latest stories
Want to see more?
View All Stories
Fox Sports™ and © 2020 Fox Media LLC and Fox Sports Interactive Media, LLC. All rights reserved. Use of this website (including any and all parts and components) constitutes your acceptance of these Terms of Use and Updated Privacy Policy. Advertising Choices. Do Not Sell my Personal Info