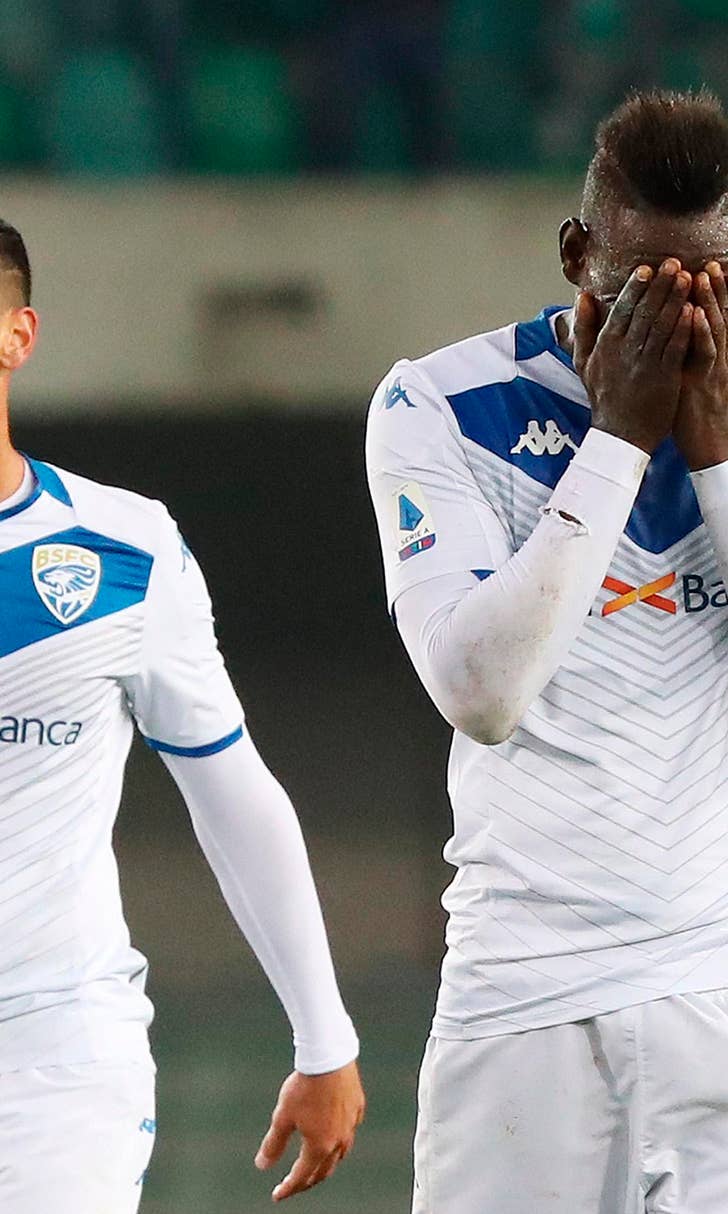 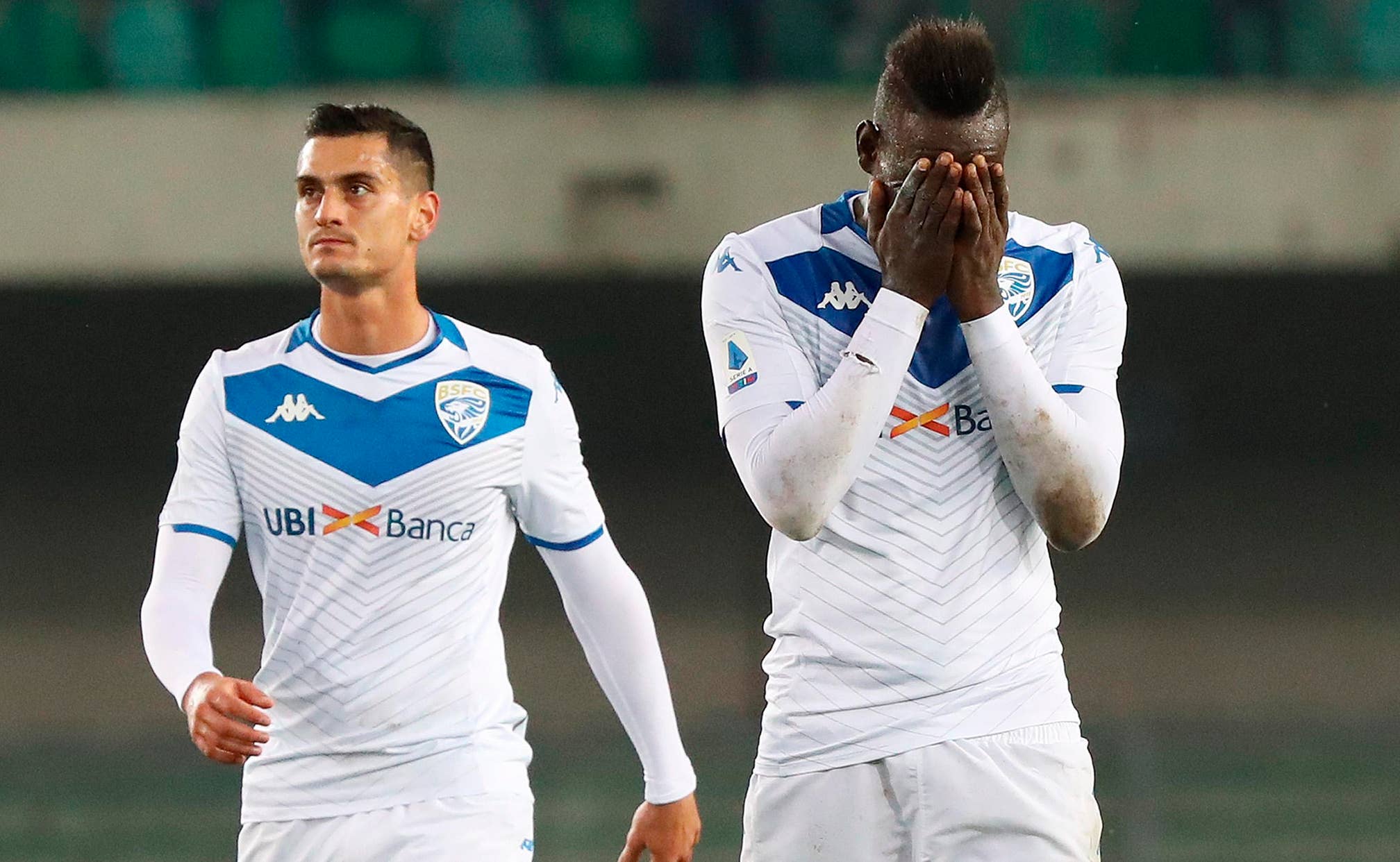 'Shame on you': Balotelli lashes out at fans for racism

ROME (AP) — Mario Balotelli's most important kick on Sunday had nothing to do with the curling shot that he whipped into the top corner of the goal from beyond the box.

Rather, it was the drop-kick the Brescia striker made moments earlier when he booted a ball high into the stands to express his frustration at racist chants from Hellas Verona fans.

Balotelli then attempted to leave the field in the most high-profile incident yet in a Serie A season that has been marred by constant episodes of discrimination.

"Thanks to all the colleagues on and off the field for the solidarity expressed toward me and all of the messages received from you fans," Balotelli wrote later in Italian on Instagram, accompanied by a video from the match . "A heartfelt thanks. You've shown yourself to be real men, not like those who deny the evidence."

It was the second time this weekend that a Serie A game was suspended for offensive chants, after Roma supporters aimed anti-territorial chants at Napoli on Saturday.

Derogatory chants have also been aimed at Romelu Lukaku, Dalbert Henrique, Miralem Pjanic, Ronaldo Vieira and Kalidou Koulibaly in Serie A this season. There was also a case of racist chants aimed by Verona fans at AC Milan midfielder Franck Kessie in September.

Visibly upset as he fought for the ball near the corner flag at the end of the stadium where the monkey chants were emanating from, Balotelli had heard enough. He interrupted the action, picked up the ball with his hands and drop-kicked it into the crowd.

Brescia teammates and Verona players went over to embrace Balotelli and persuaded him to stay as the referee ordered a warning to be read out over the stadium's public address system.

"There was absolutely nothing," Juric said. "There were a lot of whistles every time he had the ball but not racism. I didn't hear a single (chant)."

Brescia coach Eugenio Corini also said he didn't hear the offensive chants but added, "If the referee decided to suspend the match and ask for that announcement to be made something must have happened.

"Honestly, I was far away and I didn't hear anything," Corini said.

Corini was later fired by the club which has struggled this season and is near the bottom of Serie A. No new manager was immediately announced.

The match at the Bentegodi stadium was suspended for several minutes with Verona leading 1-0 at the time before it resumed.

Balotelli, who is black, was born in Italy to Ghanaian immigrants and has represented Italy's national team. He recently returned to Serie A after several seasons in France.

The 29-year-old Balotelli also experienced racism at the beginning of his career in Italy, when he rose to prominence with Inter Milan.

Verona went ahead 2-0 before Balotelli scored for Brescia and the game ended 2-1.

Balotelli, who did not celebrate his goal, also hit the post in the first half of one of his best performances since joining Brescia — his hometown club — in August.

"I apologized to him if someone might have said something," Setti said.

Balotelli did not speak with reporters after the match.

Quietly putting together a season that could be one to remember, Cagliari moved into contention for the Champions League spots with a 2-0 win at 10-man Atalanta.

An own-goal from Mario Pasalic and a goal from Christian Oliva moved Cagliari into sixth place and level on points with fourth-place Lazio and fifth-place Atalanta.

Cagliari has not qualified for European competition in a quarter century since reaching the semifinals of the 1994 UEFA Cup — the competition which has since been renamed the Europa League.

The top four finishers in Serie A qualify for the Champions League, while the fifth- and sixth-place teams enter the Europa League.

After opening the season with two losses, Cagliari is now on a nine-match unbeaten run.

It's Cagliari's best start since winning its only Serie A title in 1970.

What's more, it was the first time this season that Atalanta — which still leads the league with 30 goals scored — failed to score.

Cagliari also won away at Napoli and drew at Roma this season but coach Rolando Maran called this game his club's best performance.

"We decided the best way of approaching it was to force them to defend," Maran said.

AC Milan's struggles continued with a 2-1 loss at home to Lazio that left the Rossoneri in the bottom half of the table.

Ciro Immobile scored his 100th goal for Lazio in all competitions and Joaquin Correa got the winner after an own-goal by Bastos.

Udinese won 3-1 at Genoa under interim coach Luca Gatti, who took over when Igor Tudor was fired Friday after the northeastern club conceded 11 goals in its previous two games.

Also, Fiorentina drew 1-1 with Parma, and Lecce and Sassuolo finished 2-2.

Atalanta
share story
those were the latest stories
Want to see more?
View All Stories
Fox Sports™ and © 2020 Fox Media LLC and Fox Sports Interactive Media, LLC. All rights reserved. Use of this website (including any and all parts and components) constitutes your acceptance of these Terms of Use and Updated Privacy Policy. Advertising Choices. Do Not Sell my Personal Info