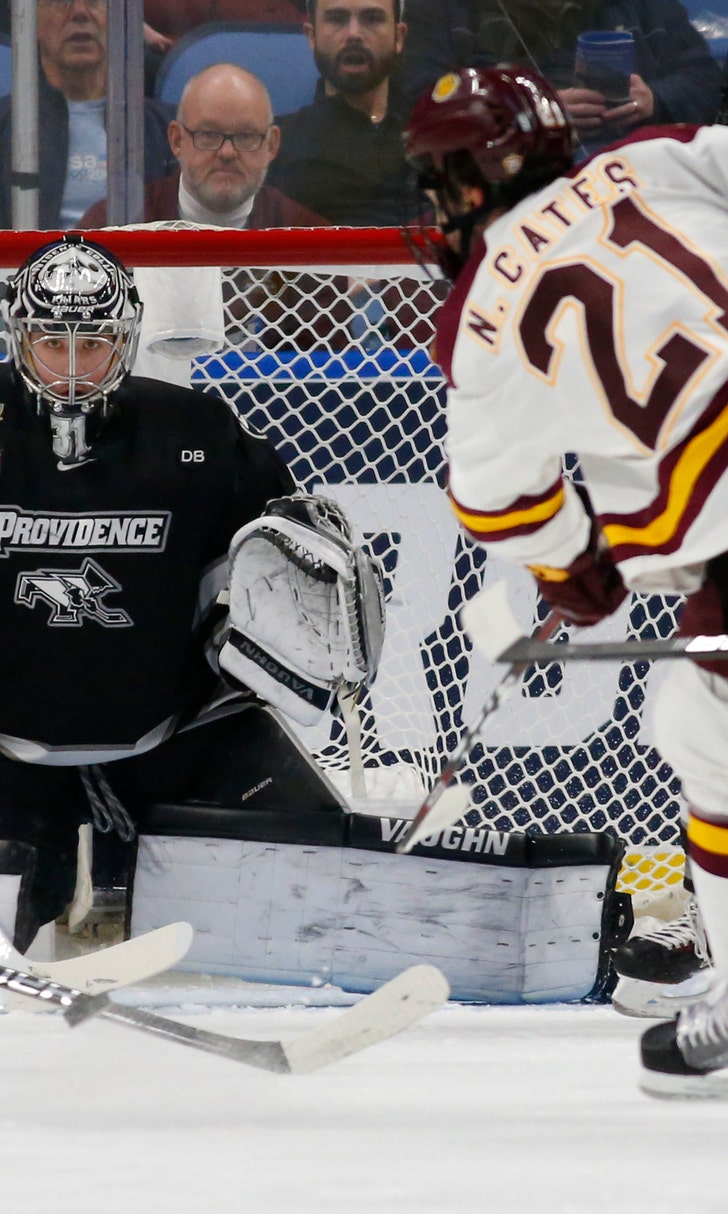 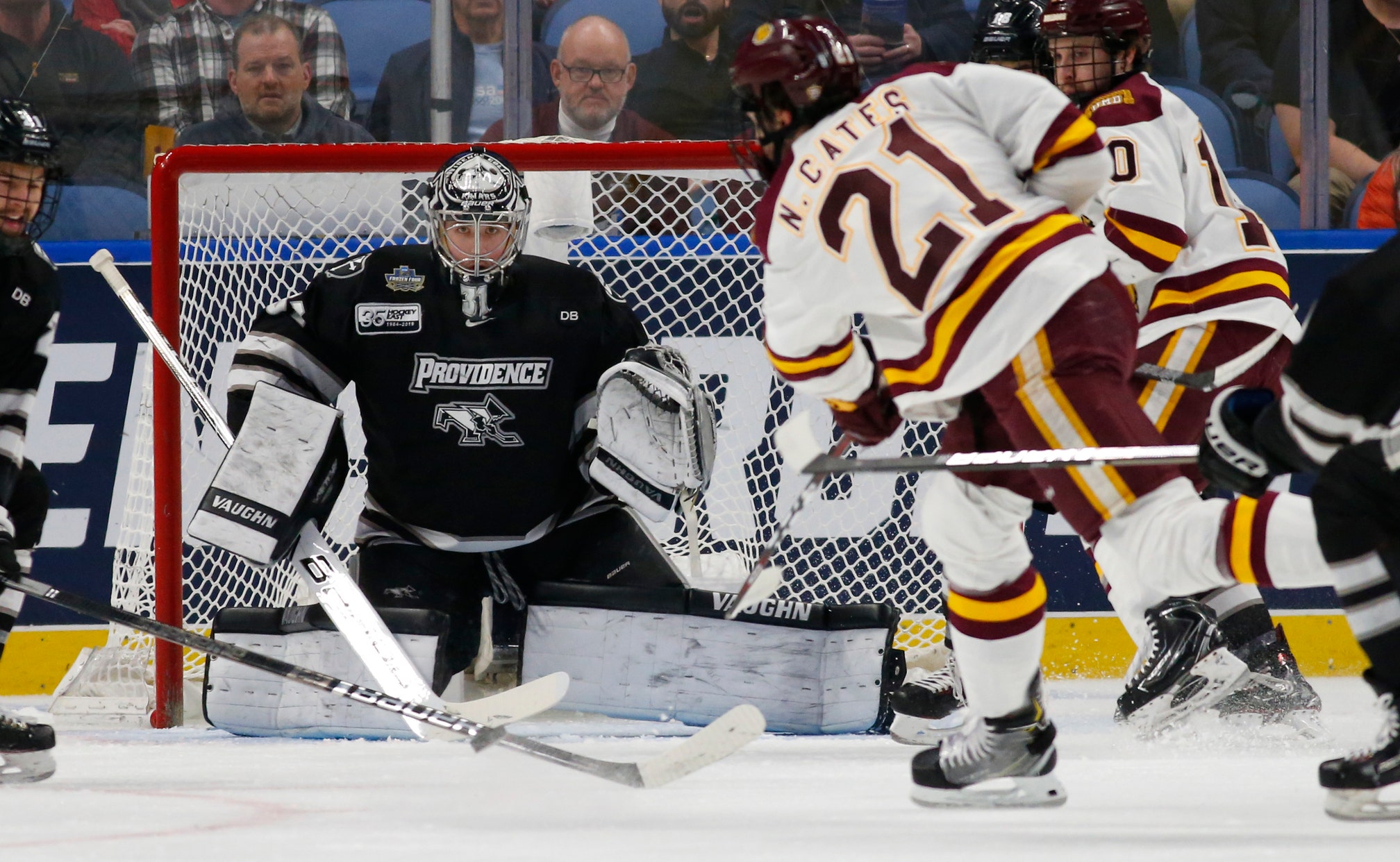 BUFFALO, N.Y. (AP) — Coach Scott Sandelin isn't taking Minnesota Duluth's third consecutive trip to the Frozen Four championship game for granted because of how difficult it is to get there.

It wasn't easy for the Bulldogs once again in pulling out a 4-1 victory over Providence in a tightly contested game they sealed by scoring two empty-net goals in the final 33 seconds Thursday night. They will face Massachusetts in the final. The Minutemen beat Denver 4-3 in overtime in the second semifinal.

Minnesota Duluth (28-11-2) overcame having two goals disallowed in the first period and then killed off the Friars' two-man-advantage in the third period, some three minutes before Billy Exell scored the go-ahead goal with 9:53 left.

"I was nervous as hell when they got the 5-on-3, the way their power play was," Sandelin said. "To be able to do that at that time of the game was a big-time moment. Those are changing, turning points in games. Whether we went on to win that, I was just thrilled to get out of their still tied."

Justin Richards scored twice, including an empty-netter, and Dylan Samberg also scored for Minnesota Duluth. The Bulldogs are attempting to become the first team to win consecutive titles since Denver in 2004-05.

Providence (24-12-6) was denied an opportunity to reach its first championship game since 2015, when the Friars beat Boston University 4-3 to win their first title. Josh Wilkins scored for Providence and Hayden Hawkey stopped 32 shots.

Sandelin credited the Bulldogs for leaning on their past experience playing on a big stage.

"Our group has been in a lot of tough games, they've been in big games. And they've learned how to win some of those games," said Sandelin, who became the ninth coach to reach the championship game four times. "It's never easy. It doesn't always happen right away. This group, sometimes I didn't know if it was there. But they've really proven it here when it's crunch time."

Exell's goal was just the senior's third of the season.

Kobe Roth set up the goal by firing a shot from inside the blue line. Hawkey got his blocker up to stop it, but couldn't control the rebound. Exell was already driving to the net when he chipped a bouncing puck over Hawkey's out-stretched glove.

The goal came after Exell spent some anxious moments in the penalty box with teammate Tanner Laderout during the Friars' 5-on-3 advantage. He picked up the second penalty in breaking up a scoring chance by slashing Providence's Jack Dugan from behind while driving alone to the net. Dugan was unable to get off a shot.

"Definitely, Tanner and I were stressing a little bit," he said. "We were yelling even though they probably couldn't hear us. But yeah, we thought our penalty kill did a great job."

Shepard stopped all four shots during the two power plays, including getting his left shoulder up to foil Scott Conway set up to the right of the net.

"It did swing momentum, I'm not going to lie to you," Friars coach Nate Leaman said.

Added forward Jacob Bryson: "I guess it kind of hurt us a little bit. As a team, we expect to score on those 5-on-3s.

Minnesota Duluth had its first goal disallowed midway through the first period, when officials confirmed the whistle had blown the play dead before Exell poked in his own rebound under goalie Hayden Hawkey, who had appeared to cover up the puck.

Then, with 3:20 left, Cole Koepke had his goal disallowed after officials ruled following a lengthy review that the forward interfered with Hawkey when he swept in the puck from the slot and inside the left post.

NOTES: The Bulldogs featured 14 players with previous Frozen Four experience and, with captain Parker Mackay leading the team in playing his 13th NCAA Tournament game. ... Providence entered the Frozen Four with the most experienced lineup which was made up of six seniors and seven juniors. ... Friars associate head coach Ron Rolston made a homecoming after coaching the Buffalo Sabres spanning the 2012-13 and 2013-14 seasons.