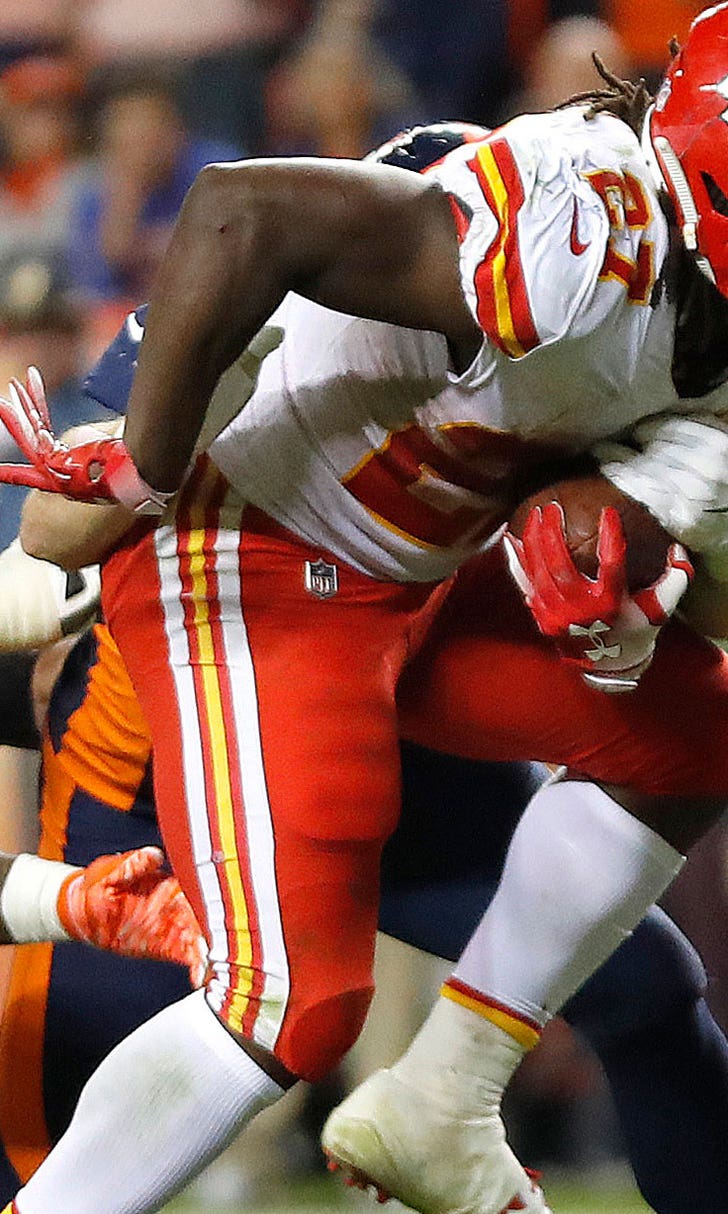 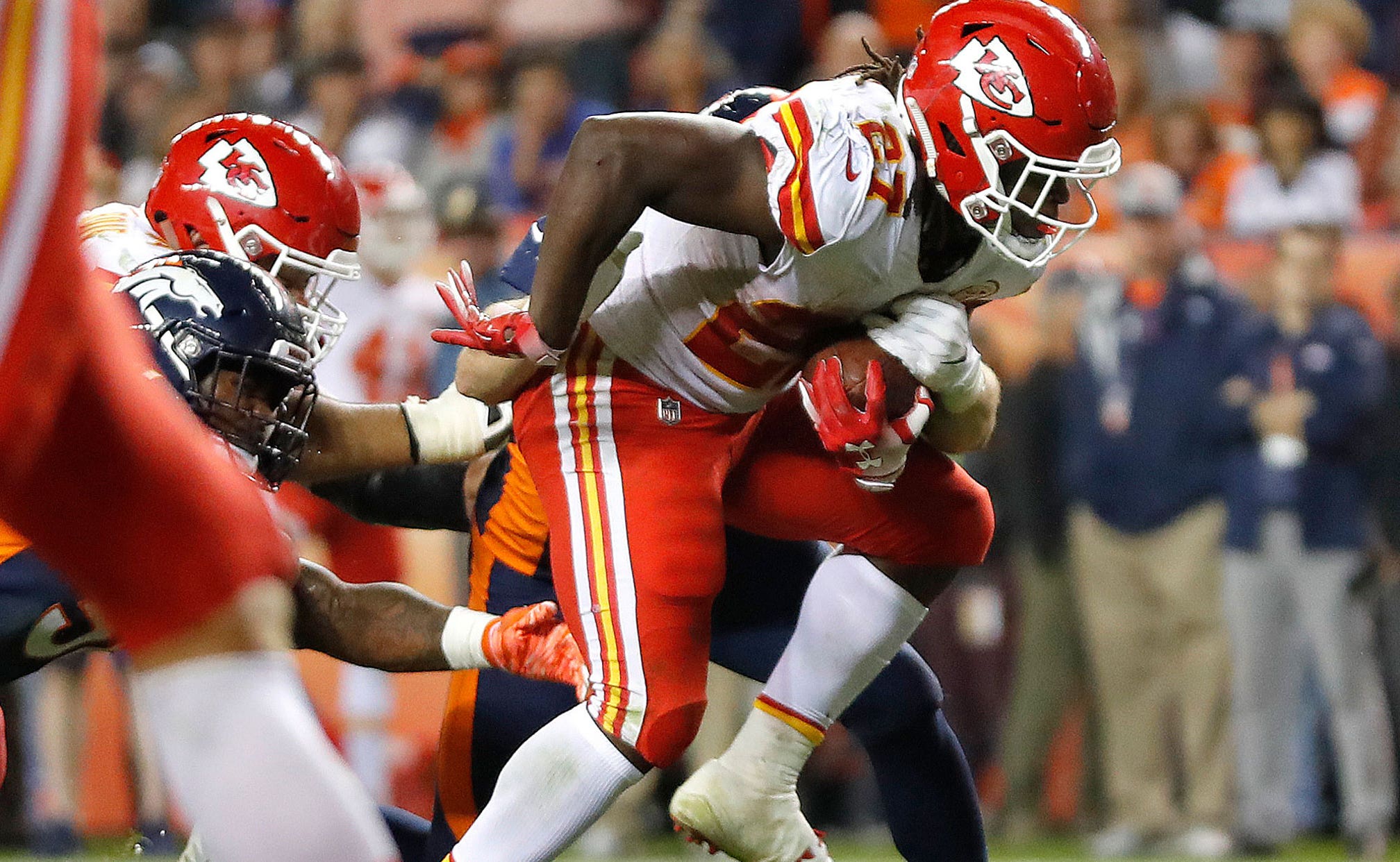 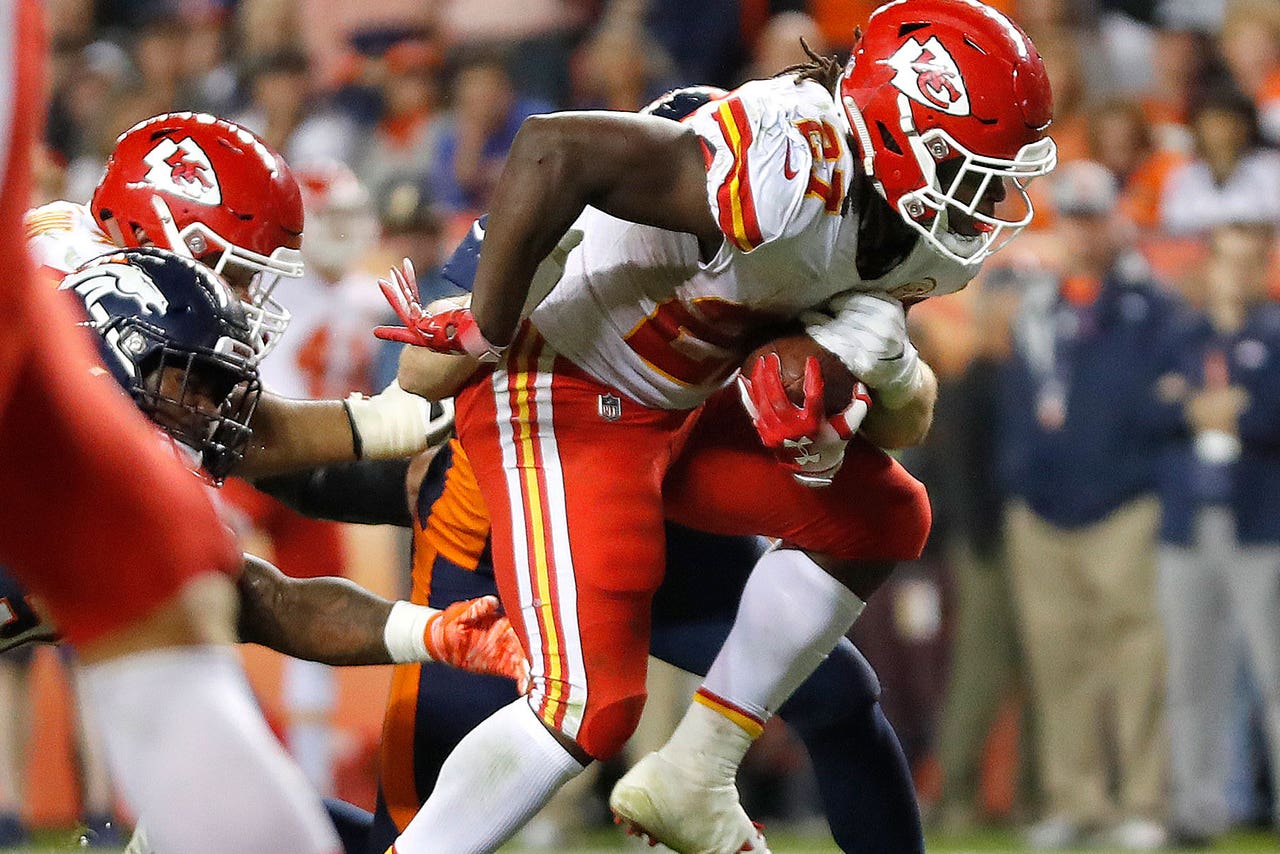 KANSAS CITY, Mo. — Patrick Mahomes finally experienced some adversity Monday night in Denver, when the offense had grown stagnant and the Chiefs trailed by 10 points with about 12 minutes to go.

He answered with a dramatic fourth-quarter comeback.

There was the grinding, 12-play, 75-yard drive that Mahomes capped with a short touchdown toss to Travis Kelce to give Kansas City a chance.

Then there was the audacious left-handed throw while Von Miller was bearing down on him during the go-ahead drive, which Kareem Hunt capped with a touchdown run in the final minutes to give the Chiefs a dramatic 27-23 victory.

"I didn't think at all. I was just kind of scrambling to my left, I felt Von on my back and I knew I couldn't throw it with my right hand," Mahomes said. "I knew we needed a first down, so I kind of shot-putted it to Tyreek (Hill), he got the first down and made a great play."

Sure, his wide receiver made a great play.

But Mahomes had made a spectacular one.

It was the first time he'd truly faced adversity — the Chiefs had jumped out to early leads in each of their first three games, giving Mahomes a certain level of comfort. And while he rallied them to victory in his Week 17 start in Denver a year ago, there was nothing on the line that day.

This was different in several ways.

The Chiefs' dynamic offense had been held in check all night, and wide receiver Sammy Watkins had gone down with a hamstring injury, depriving Mahomes of one of his top options.

Throw in the tough road environment and the fact that the Broncos could have forged a tie atop the AFC West with a victory, and that's some heady stuff for Mahomes to deal with.

"He's a confident kid. He was confident before that," Chiefs coach Andy Reid said. "He's not going to get overconfident from it. I think it tells you, it tells everyone: You're within striking distance, you have the opportunity to make plays. The guys around him made plays, too. This wasn't just Patrick."

But it was Mahomes who was getting most of the credit Tuesday for his late-game heroics.

"He's pretty fast. He'll run all day, buy time and especially to the right, deep," Miller marveled after the game. "I'm talking like, 20 yards deep, and then he'll throw the ball 40 yards. He's a great quarterback. He did a great job tonight."

Mahomes' ability to extend plays while constantly looking downfield may have been the biggest reason the Chiefs managed to rally late.

"He made us cover for a long time. I had to go inside and get an IV. I had to get two IVs and I was just done," Harris said. "Just playing those extra times, he made us scramble in coverage the whole game. We couldn't sack this man. He's a hell of a player. He's a hell of a quarterback. He made plays with his feet, and I can't wait to play him again."

Well, the Jaguars' stingy defense gets that treat next when it visits Arrowhead Stadium on Sunday.

Already, the Chiefs could be facing some adversity when they play just their second home game this season. Kelce got banged up against Denver, and Watkins and pass rusher Dee Ford (groin) did not return to the game after leaving with injuries.

All three have been crucial to the Chiefs' early-season success.

"We just keep on battling, man. NFL football, there's going to be a lot of games that come down to the end," cornerback Kendall Fuller said. "So each drive, you've got to be locked in. Each play, locked in. You've just go to keep on finishing."

NOTES: Reid said during a conference call Tuesday he's confident in Demarcus Robinson filling in should Watkins be unavailable this week. Robinson had two catches for 31 yards against Denver. "D-Rob had a couple nice catches and actually had a chance for another, a touchdown," Reid said.

NFL's Top Plays Of Week 12
It's another wild Sunday in the NFL. Check out the best moments from across the league!
1 hour ago

Our 60-Minute Drill For NFL Bettors
Geoff Schwartz, Jason McIntyre and Clinton Portis answered all your questions in the hour before kickoff on Sunday.
4 hours ago

Tom vs. Mahomes' Time
It's the Patrick Mahomes era. But can Tom Brady possibly turn back the clock Sunday against the Chiefs and his heir apparent?
2 days ago