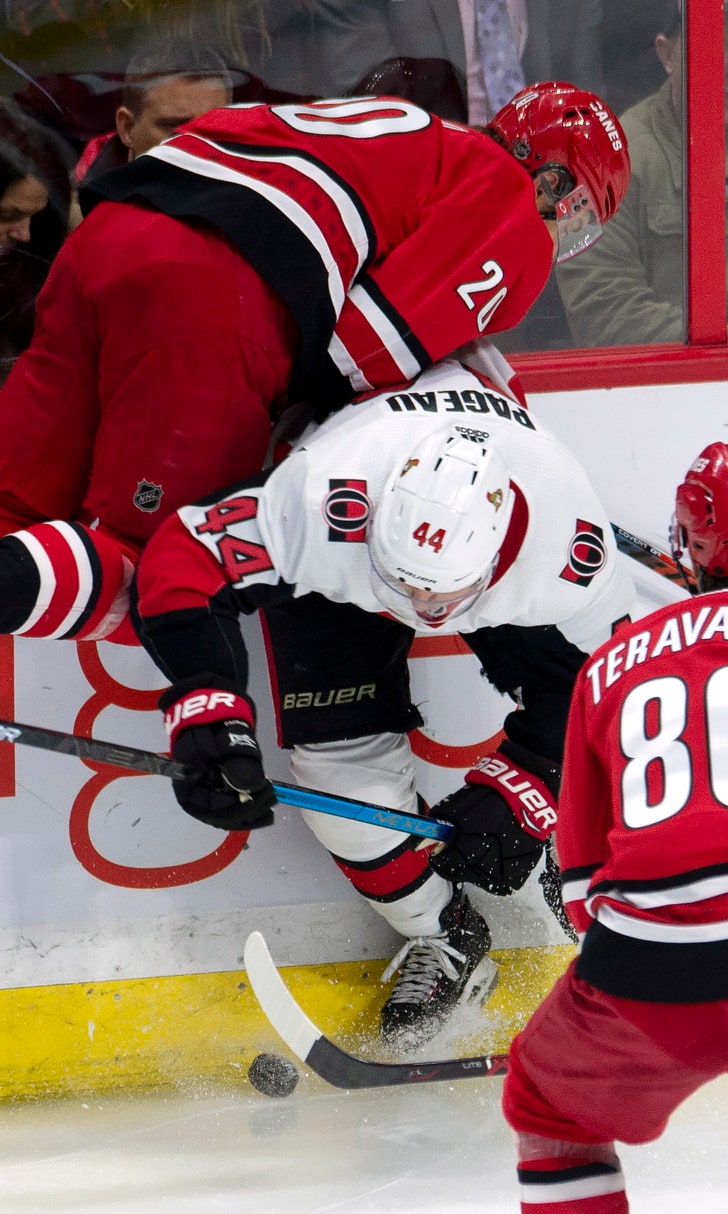 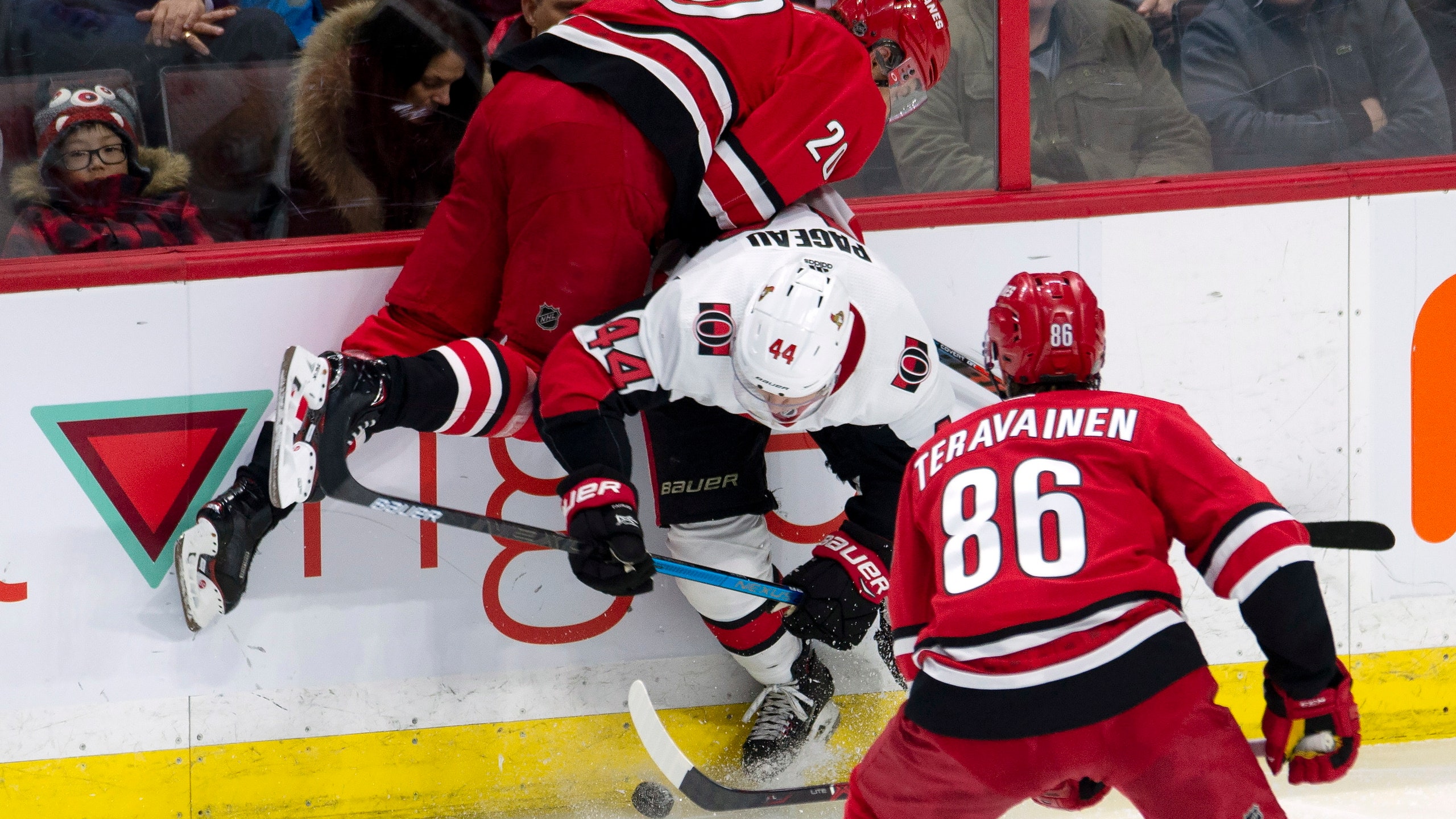 OTTAWA, Ontario (AP) — The Ottawa Senators' penalty kill had been perfect through their last eight games. It fell short against the Carolina Hurricanes.

The Hurricanes scored the winning goal on a two-man advantage and added another on the power play — all in the third period —in a 4-1 win over the Senators on Tuesday.

The final result is disappointing as the Senators got the start they wanted, took the lead and got another solid performance from Anders Nilsson, who was making his third straight start. He stopped 33 shots.

"I thought (Nilsson) did a good job getting us there and probably deserved better from us in the third," Bobby Ryan said. "You take away the 5-on-3 and couple 10-bellers that he had to come up with on the penalty kill and I thought we did a pretty good job keeping them at bay on the secondary chances, but it is disappointing. We came out with an objective in the third and clearly didn't meet it."

Teuvo Teravainen scored two of Carolina's four unanswered goals in the third period as the Hurricanes wrapped up a season-long five game trip.

With the win, the Hurricanes moved within a point of Pittsburgh for the final wild-card spot in the East.

"Being on the road for 10 days, it's always hard and we did great," Calvin de Haan said. "I'd say we did better, maybe, than expected playing in some of these buildings, so it was a good road trip overall."

"It wasn't that pretty from the start, but we got better," Teravainen said. "The power play came up huge and got a couple goals."

Mark Stone scored the lone goal for the Senators, who saw their two-game winning streak come to an end.

Despite trailing 1-0 heading into the third period, the Hurricanes felt confident there was plenty of time for them to get back in the game.

"We've had some good last periods, so we were trying to keep those habits," Teravainen said. "Just need to keep believing in our game. We don't have to do anything special, just the same old and shoot the puck and luckily our power play was good to get the win."

Down 1-0, the Hurricanes tied the game just 16 seconds into the third period when Dougie Hamilton found Ferland at the net for a tap-in.

Soon after, the Senators found themselves in penalty trouble as Thomas Chabot was called for tripping and Cody Ceci took a double-minor for high sticking Nino Niederreiter.

Carolina wasted no time on the two-man advantage as Williams scored and just over one minute later Teravainen made it 3-1 by beating Nilsson with a one-timer.

"That penalty and the 5-on-3 just kind of killed us and we couldn't get the kill when we needed it," Dylan DeMelo said. "Our PK's been really good for a long stretch now, but we just couldn't get that kill."

Teravainen scored his second and 17th of the season late in the period off a turnover as he beat Nilsson high on the short side.

The Senators appeared to take a 2-0 lead at the four-minute mark, but the goal was called back when it was deemed there was a kicking motion when Jean-Gabriel Pageau connected with the puck before it bounced in off McElhinney.

"That was unfortunate," DeMelo said. "If there's no goalie in net that's going into the corner, so obviously he's not trying to kick it in. Sometimes those can go either way and it's tough it didn't go our way, but we still had plenty of looks to get a couple more and just weren't able to get more than that one."

Both teams had a number of good chances in the first, but it was Ottawa that opened the scoring at the 12-minute mark. Stone knocked a puck out of the air and over McElhinney's shoulder to extend his point streak to four games (four goals, two assists).

NOTES: Filip Gustavsson got his first NHL recall and served as the Senators' backup Tuesday as Craig Anderson took a tennis ball to the eye Monday. ... Patrick Brown was a healthy scratch for the Hurricanes. ... A heavy snow storm hit the area and a season-low 10,648 were on hand at the Canadian Tire Centre.

Senators: At Detroit on Thursday.

Teuvo Teravainen
share story
those were the latest stories
Want to see more?
View All Stories
Fox Sports™ and © 2021 Fox Media LLC and Fox Sports Interactive Media, LLC. All rights reserved. Use of this website (including any and all parts and components) constitutes your acceptance of these Terms of Use and Updated Privacy Policy. Advertising Choices. Do Not Sell my Personal Info