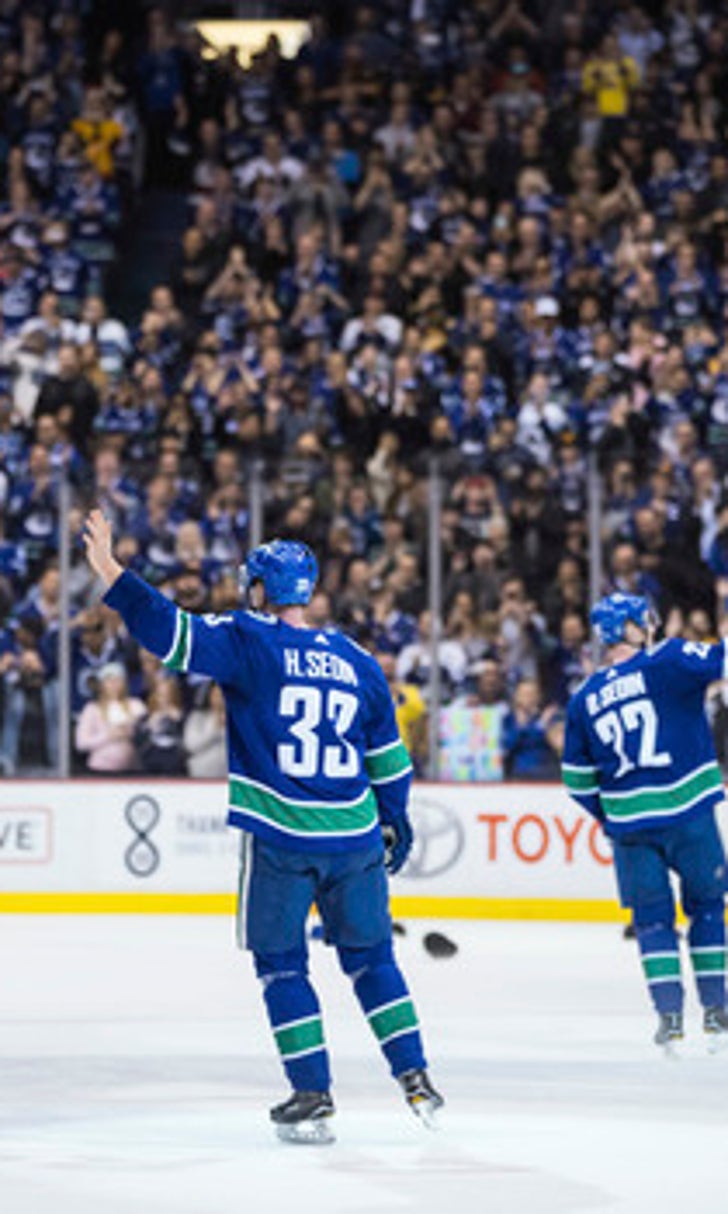 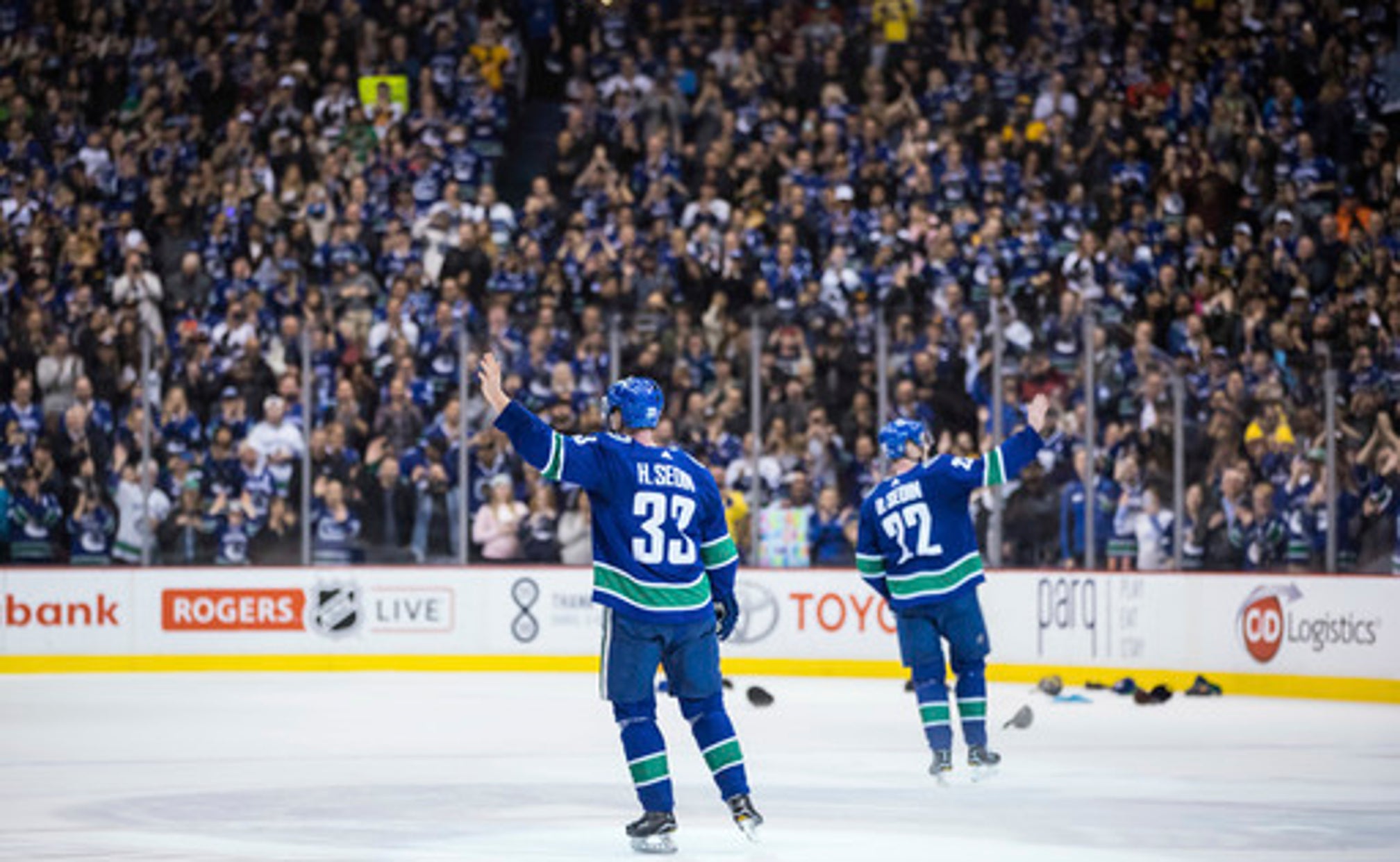 VANCOUVER, British Columbia (AP) It couldn't have been scripted any better.

Daniel and Henrik Sedin said goodbye to the hometown crowd with a memorable farewell.

Daniel scored the winning goal in overtime , off an assist from twin brother Henrik as the Vancouver Canucks defeated the Arizona Coyotes 4-3 Thursday night.

It was the Sedins' final NHL game at Rogers Arena and a step back in time for the crowd of 18,865 who had one more taste of the elegance and skill the brothers brought to the sport.

A blurry-eyed Daniel tried to describe his feelings when he saw the puck go into the net.

''Relief,'' he said. ''I was happy. You couldn't dream of a better ending in this building, the last time we stepped on this ice.

For Henrik, the Canucks' captain and franchise leader in points, it was a perfect ending to an emotional week.

''When I woke up this morning I knew it was going to be a big day,'' said the older brother by six minutes. ''We tried to enjoy every minute of it.''

Daniel finished with two goals. Henrik also assisted on his first goal in the second period which tied the game 1-1.

The 37-year-old twins from Ornskoldsvik, Sweden, announced Monday they are retiring after playing 17 seasons with the Canucks. Drafted second and third overall in 1997, their final game will be Saturday in Edmonton against the Oilers.

The boisterous crowd at Rogers Arena was on its feet for most of the third period and the overtime. Between ovations there were chants of ''Go Sedins Go'' and ''Hall of Fame.''

The anticipation ratcheted up even higher when the Sedins went over the boards after Arizona's Richard Panik was called for hooking at 1:16 of overtime.

The goal came when Henrik passed back to Daniel, who blasted a shot from the blue line.

The Canucks came off the bench to mob the brothers. Hats littered the ice. Coyote players banged their sticks in recognition.

After the celebration Daniel and Henrik slowly skated around the arena, waving and clapping to the fans.

Defenseman Alex Edler said it was the kind of finish the Canucks wanted for their teammates.

''It was special for sure,'' said Edler, who also assisted on both of Daniel's goals. ''We talked before the game it was going to be loud. We just fed off that.

''The twins had a great game. They were on fire. It was a perfect ending.''

The first goal was a throwback to the Sedins' early years.

The play began with Henrik making a move along the boards, then dishing the puck to Edler, who was streaking toward the goal. He passed to Daniel, who shot into an open net.

Both Sedins had season highs of ice time. Henrik logged 21 minutes 36 seconds. Daniel was on for 21:12 and had 10 shots on goal.

Winning the game was just the icing on the cake. Sending the fans home buzzing about a last special performance was the main victory for the Sedins.

''It means something,'' Henrik said. ''The way the crowd showed up, right from the warmup.

''To finish off like we did, they can walk away and remember this. If you lose the game 5-1, it's not fun. It's a better feeling for us.''

Jake Virtanen and Brendan Leipsic got the other goals for the Canucks. Both teams will miss the playoffs.

With Vancouver struggling in the standings, Rogers Arena has often been a quiet building with plenty of empty seats this season. The Sedins' finale produced the energy and enthusiasm of a playoff game.

Even in the warmups, fans lined the boards waving signs and snapping pictures on cell phones. One woman held up a sign which lit up with the words ''Congrats Henrik and Daniel.''

The first standing ovation came when the Sedins skated out for the national anthems. During the game there were loud cheers each time the Sedins stepped on the ice, anticipation whenever they touched the puck.

The fans almost got their wish 18 seconds into the game when Henrik hit the post.

The standing ovations continued after most whistles during the third period. Daniel and Henrik acknowledged with waves.

Prior to the game there was a video tribute. Past Canucks players and coaches talked about the Sedins' history, their contributions on the ice and their work in the community. A tribute mural wall was installed outside the arena for fans to write messages. The lights outside Rogers Arena and in many city buildings glowed Swedish blue and yellow in tribute.

During the game some fans chanted ''one more year.'' Daniel was asked if there was any chance the brothers would reconsider their retirement.

NOTES: Attending the game were the Sedins' parents and two brothers. . The Canucks gave out their team awards with rookie Brock Boeser the most outstanding player, Alex Edler the top defenseman and Derek Dorsett the unsung hero.

Coyotes: Host Anaheim on Saturday in the regular-season finale.

Canucks: Travel to Edmonton on Saturday in the regular-season finale.