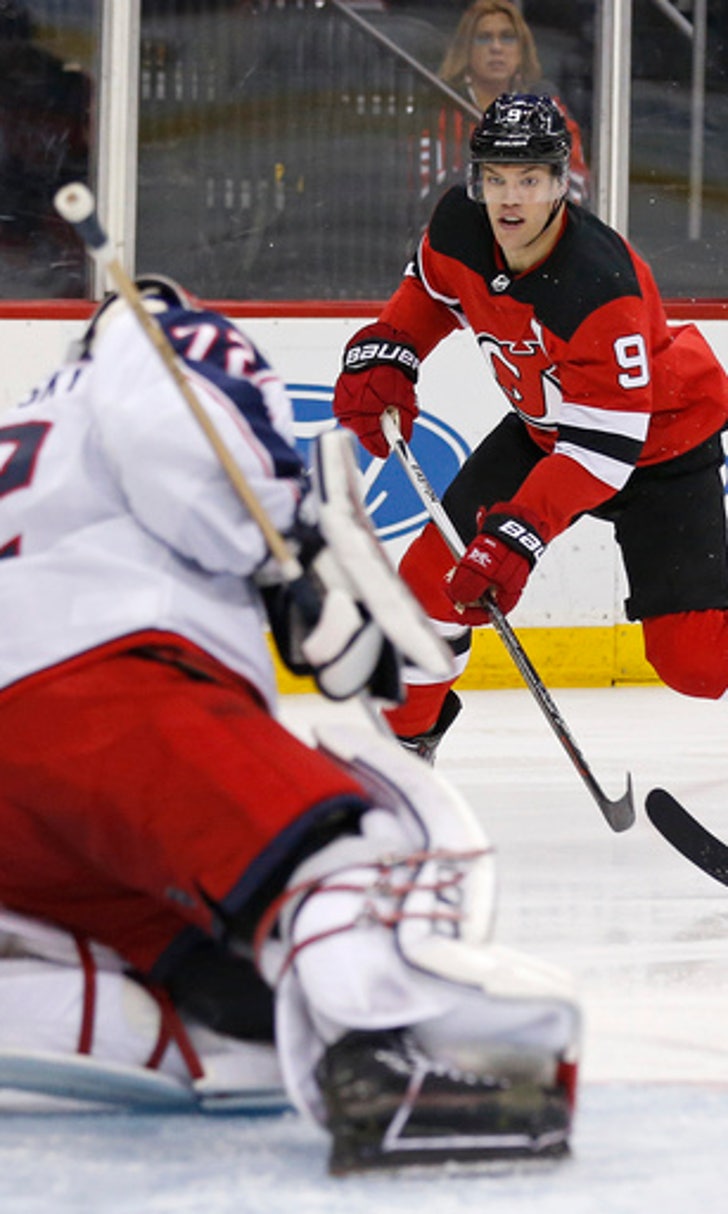 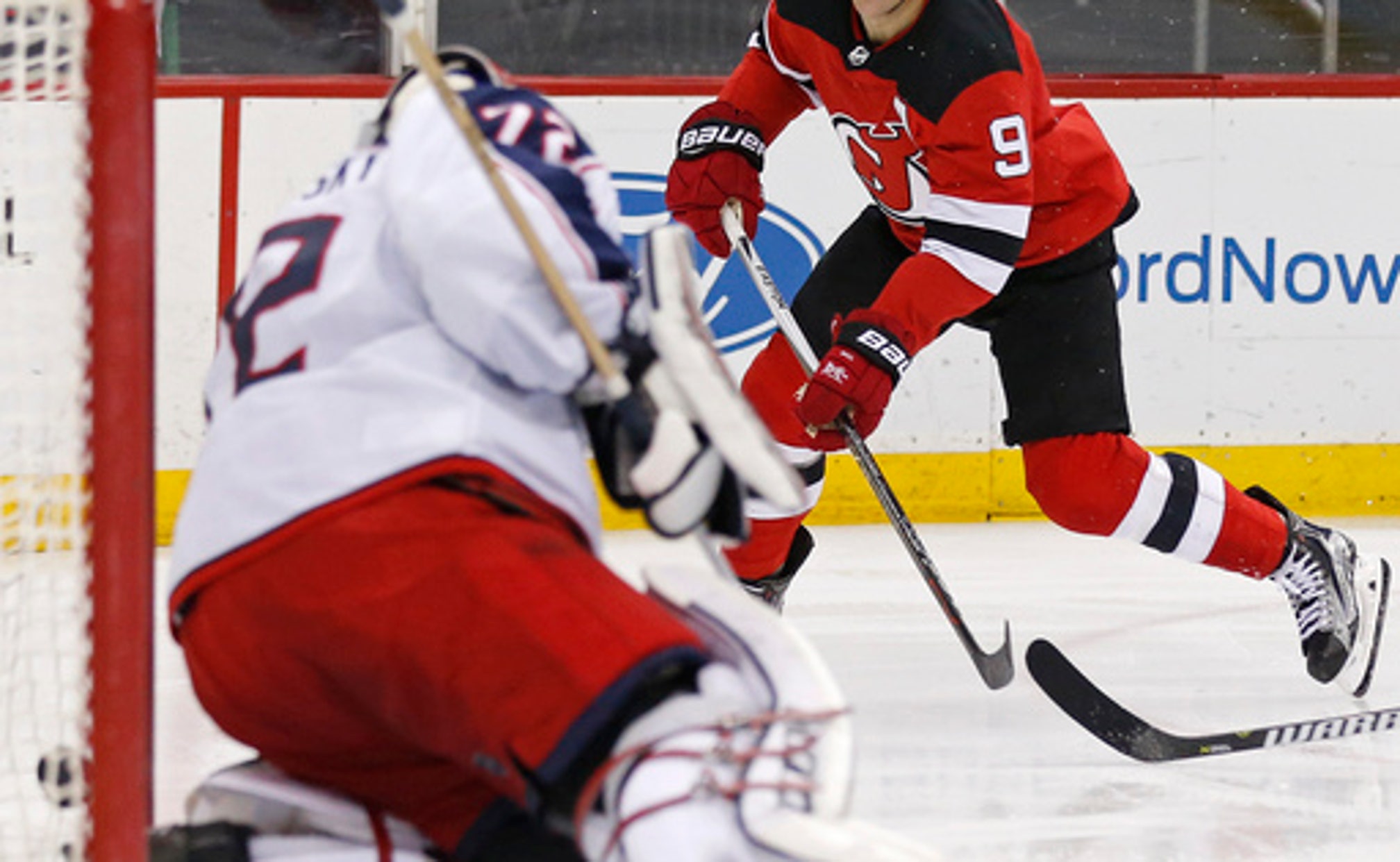 NHL change of power in the NHL in NYC area: Devils are back

NEWARK, N.J. (AP) There has been a power shift in the New York City metropolitan area in the NHL.

After missing the playoffs for the past five seasons and finishing at the bottom of the Eastern Conference last season, the New Jersey Devils seemingly are back.

And that's not all.

The New York Rangers have waved the white flag after a seven-year postseason run that included a trip to the Stanley Cup Final in 2014 and two other trips to the conference championship round. They will be trading assets for prospects as Monday's deadline approaches.

And the Islanders are being the Islanders. They are talented, inconsistent and just on the edge of a playoff berth heading into the final quarter of a season that might be John Tavares' last with the club should he choose free agency.

The surprising story is the Devils. They are young, fast and a pain in the neck to play against. Their 70 points with 22 games left in the season matches their total of last year and it has them in the top wild-card position.

Taylor Hall, the first overall pick in the 2010 draft, has been the catalyst with 25 goals and 38 assists in his bid to make the playoffs for the first time in his eight-year career.

''You don't know when it is going to come again,'' said Hall, who is having a career year. ''I don't know if injuries are going to plague us next year or we get back to this spot in the playoff race, but you really want to take advantage of it. I am trying to do that and have fun but at the same time. I really value how important each shift is in these games.''

New Jersey is not a team of stars. They have contributors, young and old.

Nico Hischier, the first overall pick in June, is centering the top line and has 13 goals and 26 assists. The 19-year-old is also an outstanding defensive player.

Defenseman Will Butcher (two goals, 28 assists) and fellow rookie Jesper Bratt (12 goals, 21 assists) have been a pleasant surprise. Veteran Brian Boyle has provided the emotional spark coming back from cancer to score 11 goals.

Speedy forward Miles Wood has 16 goals in just his second full season, while veteran Kyle Palmieri has added 14 goals and some grit, which is a trademark of the John Hynes-coached team.

To be honest, the Devils still need to finish what they started. They have had good streaks and bad ones, including a recent 18-game skid in which they won five games. They followed that with a four-game winning streak to quell the belief that they were freefalling to the finish.

''That's what winning teams do,'' veteran Drew Stafford said. ''You have your warts and everyone goes through that in down times. It's a matter of learning how to handle the losses and how to handle success.

''There were a couple of times this season we would get on a little run and maybe the foot came off the gas a bit. That's something we are trying to correct, and we did.''

Unlike last year when they were trading players at the deadline, general manager Ray Shero said the Devils will entertain offers.

If they can get someone to help the team, they will deal, but not at the expense of giving away prospects to win right now.

The Rangers, who have seen Chris Kreider (blood clot) and Kevin Shattenkirk (knee) lost to injuries, are another story. They are in last place in the Metropolitan Division, having lost 11 of 14 games.

Earlier this month, management announced it will not try to save this season. It will look to rebuild the franchise that went to the playoffs 11 of 12 years.

Forwards Rick Nash and Michael Grabner are on the trading block and so might defenseman and captain Ryan McDonagh as well as forward Mats Zuccarello.

''Let's face it - we've had a pretty good run for a while,'' general manager Jeff Gorton said earlier this month. ''Many years we've had a team that, at this time of year, we're looking to add players and try to win a Stanley Cup.

''Right now, as we sit last in our division, it's becoming increasingly clear that's not our team right now. That's not where we want to be.''

After making the playoffs the previous two seasons, the Islanders missed the postseason last year.

Breaking down their team is simple. They can score with anyone in the league. They also give up goals just as quickly.

If they are going to make the playoffs, it will be up to general manager Garth Snow to get some help for his defense by Monday.

That may mean parting with a young kid or some draft picks, but making the playoffs might have greater urgency this year if they want to keep Tavares, their All-Star center and leader since being taken with the No. 1 pick in the 2009 draft.

TRADING DEADLINE: Besides Nash and Grabner, here's a quick list of some of the well-known players who might be switching teams before Monday:

The Five Nations tournament, which was won by the U.S., drew a crowd last week in suburban Detroit because it featured many of the world's top players 18 and under.

Every NHL team was represented by at least one scout and more than 10 teams had their general managers attend at least one game.

''It's a good spot to see all the kids,'' Yzerman said. ''This tournament - every year whether it's here or in Europe - has a majority of the top draft-eligible players from five of the best hockey-producing countries in the world.''

The league observers were watching two players in particular: Russian forward Andrei Svechnikov, a candidate to be taken No. 2 this year after Swedish defenseman Rasmus Dahlin. American forward Jack Hughes was also there. He may be the No. 1 selection overall in 2019.

It's got to be the Islanders and Devils on Saturday night in New Jersey. Both teams are fighting for a wild-card berth and the Devils have the added incentive of playing when the team retires the jersey of Patrik Elias, who spent his 20-year career in New Jersey. He retired after last season as the franchise's all-time leader in points, goals and assists, and was a member of the Devils' Stanley Cup-winning teams in 2000 and 2003.