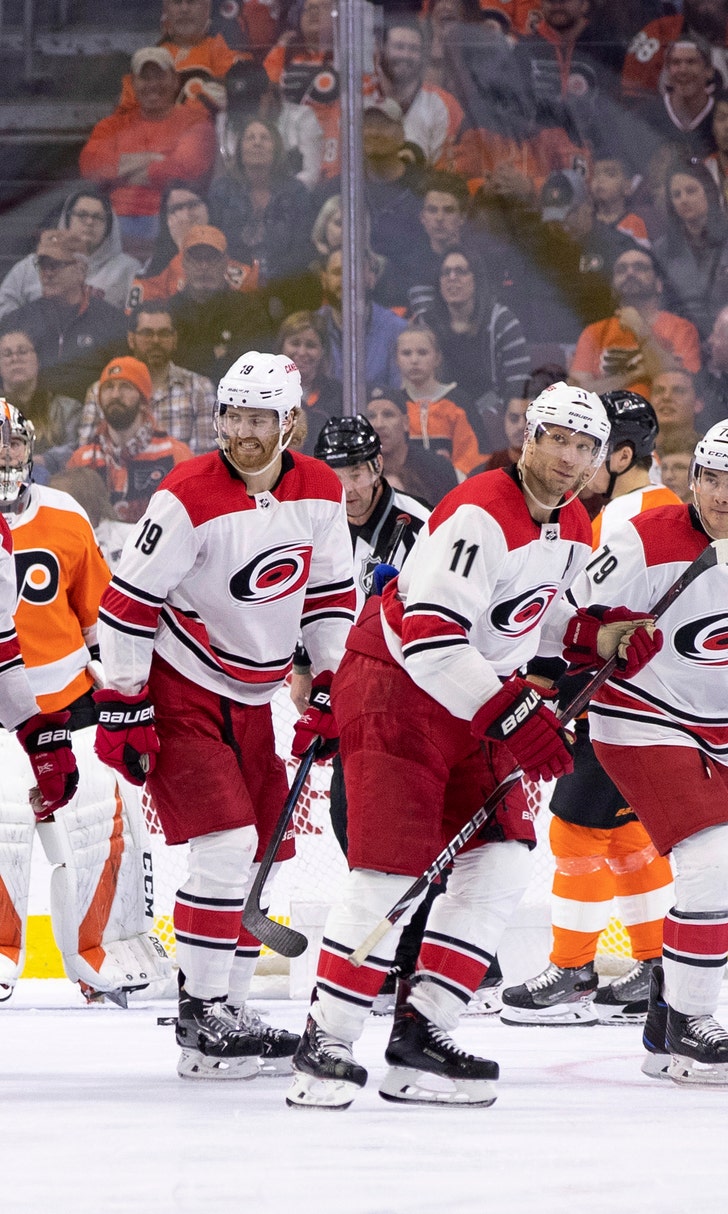 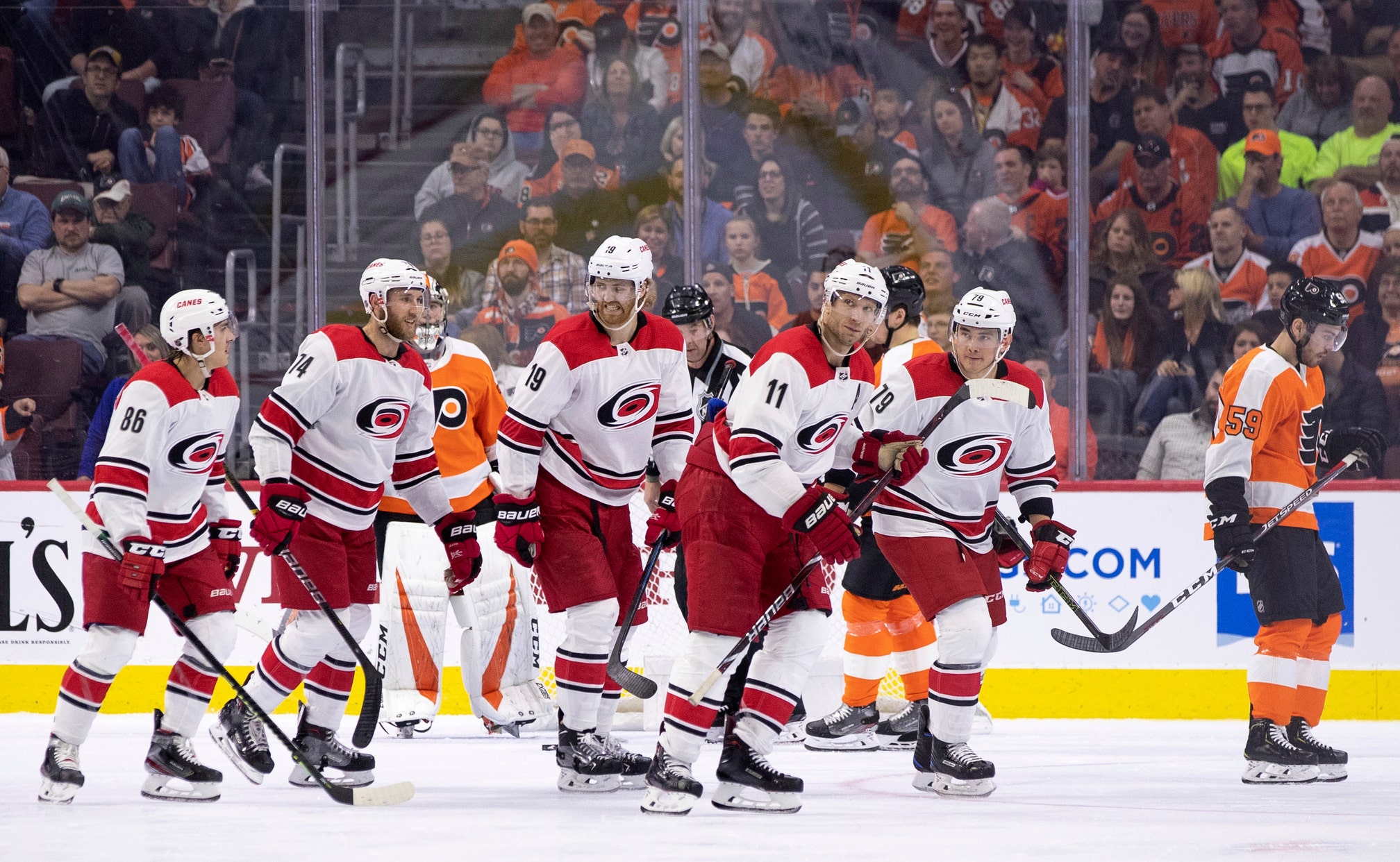 Hurricanes top Flyers 4-3, will face Capitals in 1st round

Game No. 82 for the Hurricanes had some playoff implications. But with a trip to the postseason already guaranteed, their passive play at times was excused by their first-year coach.

Jordan Staal scored the go-ahead goal in the second period and the Hurricanes barely hung on to win 4-3 on Saturday night for their fourth victory in five games.

The Hurricanes finished in the top wild-card spot in the Eastern Conference and will play the defending Stanley Cup champion Washington Capitals in the opening round of the playoffs. Warren Foegele, Justin Faulk and Teuvo Teravainen all scored in the first period for the Hurricanes, who clinched their first postseason berth since 2009 Thursday night with a win over New Jersey.

"You could just feel it," Brind'Amour said. "The guys had pretty much given everything they had all year. They knew we were in the playoffs. Even though there was stuff riding on it, at the end of the day we were basically playing Tampa or Washington. Pick your poison. I think that was in the back of their minds. I still give them credit. They came out and won the game. It certainly wasn't our best, but this group finds ways."

Carolina also set a franchise record with its 22nd road win this season. The Hurricanes went 31-12-2 over their last 45 games, placing them among the top three in the league since the calendar turned to 2019.

Oskar Lindblom, Travis Konecny and Sean Couturier had goals for the Flyers, who missed the playoffs.

The Flyers had a lineup with seven defensemen instead of the standard six — but they still struggled to defend in their own end. Foegele and Faulk were each the beneficiaries of negligent defensive zone coverage from Philadelphia and scored goals separated by 2 minutes, 29 seconds when loose pucks found their sticks in the middle of the ice.

It was the fourth consecutive game the Flyers trailed 2-0 and the 32nd time this year.

Lindblom beat Curtis McElhinney to cut the deficit to 2-1 late in the first period. But Teravainen tallied his 21st when, relatively untouched, he took a pass in the slot from Staal and beat Carter Hart with a wrist shot.

Philadelphia got goals from Konecny and Couturier in the first 6:07 of the second period to tie the game.

But Staal quickly put the Hurricanes up again — and to stay — when he beat Hart from the slot at 7:33

"It was a heck of a pass from Dougie (Hamilton) and it ended up around my skates and I was fortunate enough to get it in," Staal said.

McElhinney stopped all 10 of the Flyers' shots in the third period and finished with 28 saves overall.

"We spent a lot of time in the offensive zone," Flyers coach Scott Gordon said. "We played with energy. We created some offense. We just couldn't get the tying goal."

The Hurricanes registered just one shot on goal in the third period.

"It got away from us a little bit, but I thought we held on nicely at the end," McElhinney said.

Dates and times for the first round of the playoffs will be released Sunday morning. The Hurricanes went 0-3-1 against Washington this year, including two consecutive losses in a home-and-home split March 26 and 28.

"It's going to be a great test for us and a great challenge," Staal said. "I know as a group we're excited to get going and get playing."

NOTES: Carolina beat Philadelphia for the fourth time this season. It's the first time the Flyers failed to earn a point in a season series vs. the Hurricanes. ... Brind'Amour recorded the most wins (46) and points (99) by any Hurricanes or Hartford Whalers coach in their first season behind the bench. ... Philadelphia finished the season as the league's top faceoff team. The Flyers entered Saturday winning nearly 55% of their faceoffs.

Hurricanes: turn their attention to the Alex Ovechkin and the Washington Capitals in the first round of the playoffs.

Flyers: clean out their lockers Sunday and head into their first offseason under new general manager Chuck Fletcher.