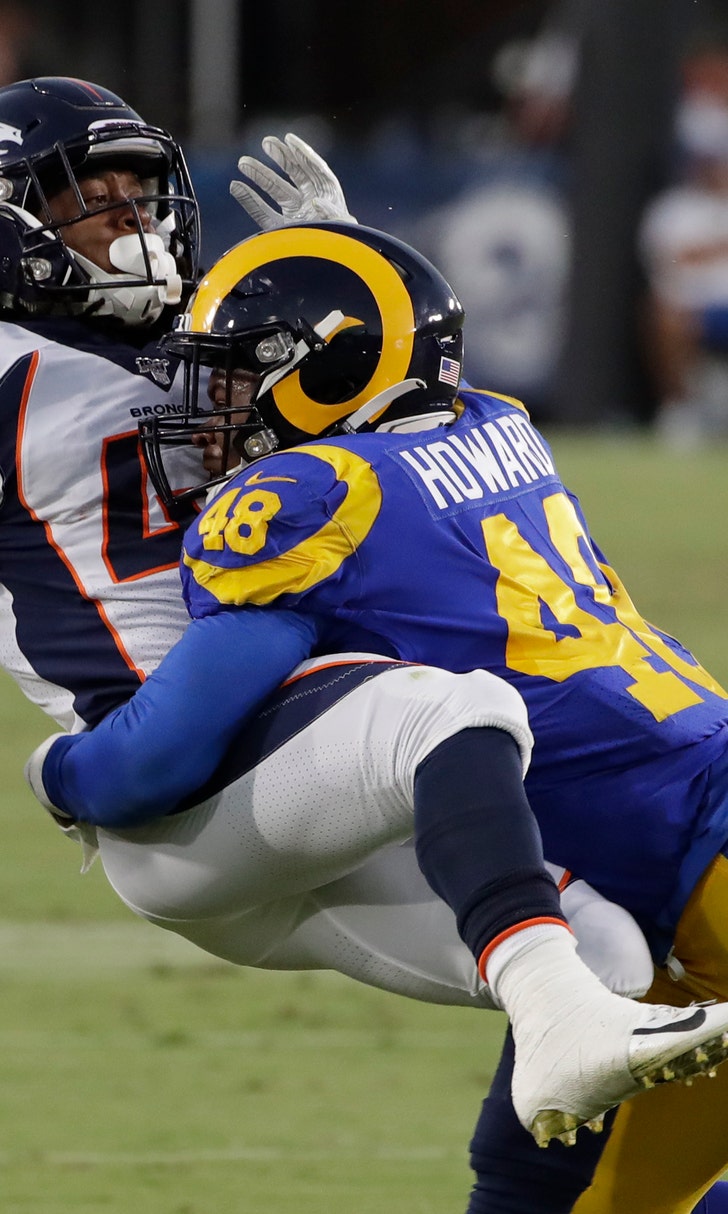 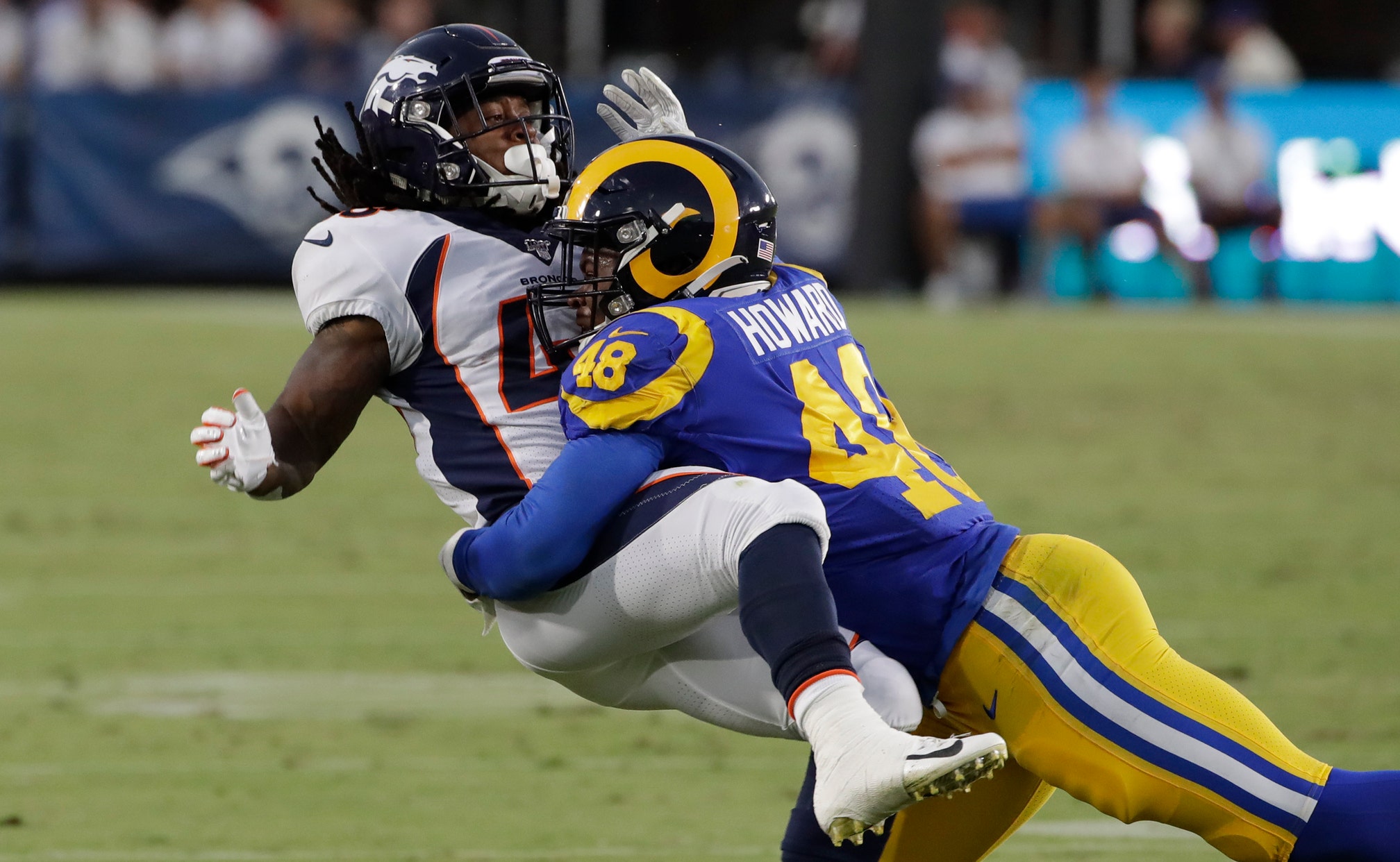 Both were seventh-round picks after playing in the Big 12, with Howard drafted in 2018 after four seasons for TCU and Allen selected this past April after playing three seasons at Texas Tech.

Both have performed well this preseason, having become all the more important to the Rams' depth at inside linebacker after projected starter Micah Kiser sustained a serious pectoral injury in the second preseason game.

But only Allen can say he was a television celebrity before arriving in Hollywood, having appeared on the second season of the Netflix reality series "Last Chance U."

"Honestly, it's kind of weird," Allen said of the recognition from the show, which documented his time at a Mississippi community college following a 2016 burglary charge. "But I'm just here trying to prove myself, prove why I belong, and just trying to get along with all the players, and I feel like I'm doing a pretty good job of doing that so far."

The show left plenty of people rooting for Allen, including Howard. Now they have plenty of Rams fans cheering for both of them following the injury to Kiser, who was expected to start after the release of incumbent Mark Barron in March.

Kiser's extended absence likely elevates five-season veteran Bryce Hager into the lineup, which in turn puts Howard and Allen closer to significant roles for the defending NFC champions. Not only will the Rams need players ready to go on defense behind starter Cory Littleton and Hager, they are also looking for contributors on special teams.

Based on how they played in the third preseason game against Denver, Howard and Allen seem capable of addressing both roles if needed. Howard started as the first-unit defense was held out again and finished with a team-leading eight tackles, while Allen received extensive playing time in the second half against the Broncos, finishing with five tackles, including one tackle for loss, and one pass defensed.

Coach Sean McVay praised both linebackers, giving kudos to Allen for his run defense and Howard for his pass coverage.

Allen "certainly has made his presence felt, and I think you feel what a physical football player he is, the instincts," McVay said.

As for Howard, McVay pointed to a play where he tracked a running back coming out of the backfield as a showcase for "the athleticism, the speed and the ability to go sideline to sideline" he possesses.

However, there are no guarantees that either player will make the final 53-man roster. Howard has been through this uncertainty before, having been placed on injured reserve after the preseason as a rookie.

Howard was later signed to the practice squad, and that experience gives him some perspective on how to approach this week.

Allen is trying to stay upbeat, but acknowledged some nervousness.

"Of course it's a stressful week," Allen said. "But as far as thinking about it, I don't think I give it too much thought, because at the end of the day I'm just going to play my best ball. If it's not good enough, it's not good enough, but knowing you did your best, that's all you can do."

And if Allen's last chance to play for the Rams happens to be at Houston on Thursday in the preseason finale, he is determined to make the most of it.

"Absolutely, I treat it like a regular game every time I step on the field, so I am definitely enjoying myself," Allen said. "And it's sad that it's only one more coming. It's about to come to an end, but I am definitely going to enjoy it while I am out there."

NOTES: McVay said there was no update regarding negotiations for contract extensions with QB Jared Goff and CB Marcus Peters. Goff is starting the fourth year of his rookie deal, while Peters is beginning the fifth-year option of his rookie contract. ... CB Aqib Talib (hamstring) could return to practice this week, McVay said. The Rams have only one more workout before they travel to Houston.

How To Win $100,000 In NFL Week 13
Before he makes his Super 6 picks for this week, Jason McIntyre compares the top teams in the NFL to pop culture.
2 days ago

Herd Hierarchy: Week 13
The Titans and Seahawks are the biggest movers in Colin Cowherd's latest rankings. As for the Chiefs? Not much has changed.
3 days ago

NFL's Top Plays Of Week 12
It's another wild Sunday in the NFL. Check out the best moments from across the league!
5 days ago

Mahomes, Hill Torch Tampa Bay
Also, Denver has a nightmarish day at quarterback, and the Niners sweep the Rams for the second straight season.
5 days ago
those were the latest stories
Want to see more?
View All Stories
Fox Sports™ and © 2020 Fox Media LLC and Fox Sports Interactive Media, LLC. All rights reserved. Use of this website (including any and all parts and components) constitutes your acceptance of these Terms of Use and Updated Privacy Policy. Advertising Choices. Do Not Sell my Personal Info