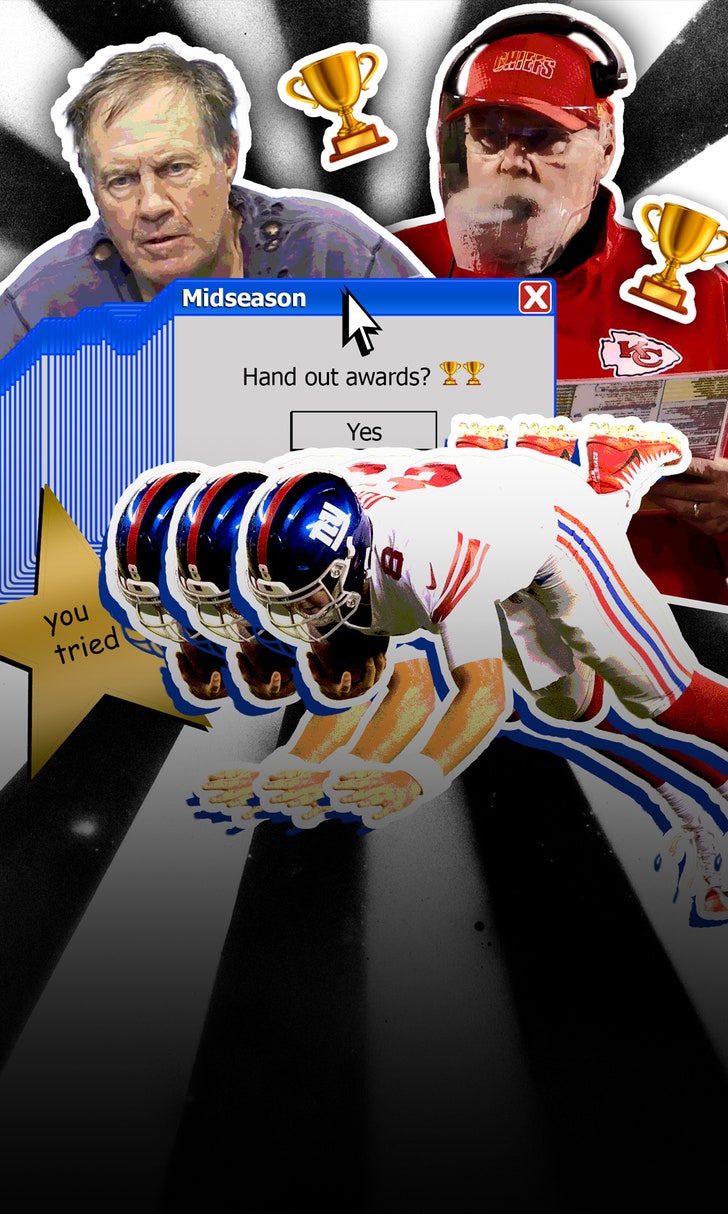 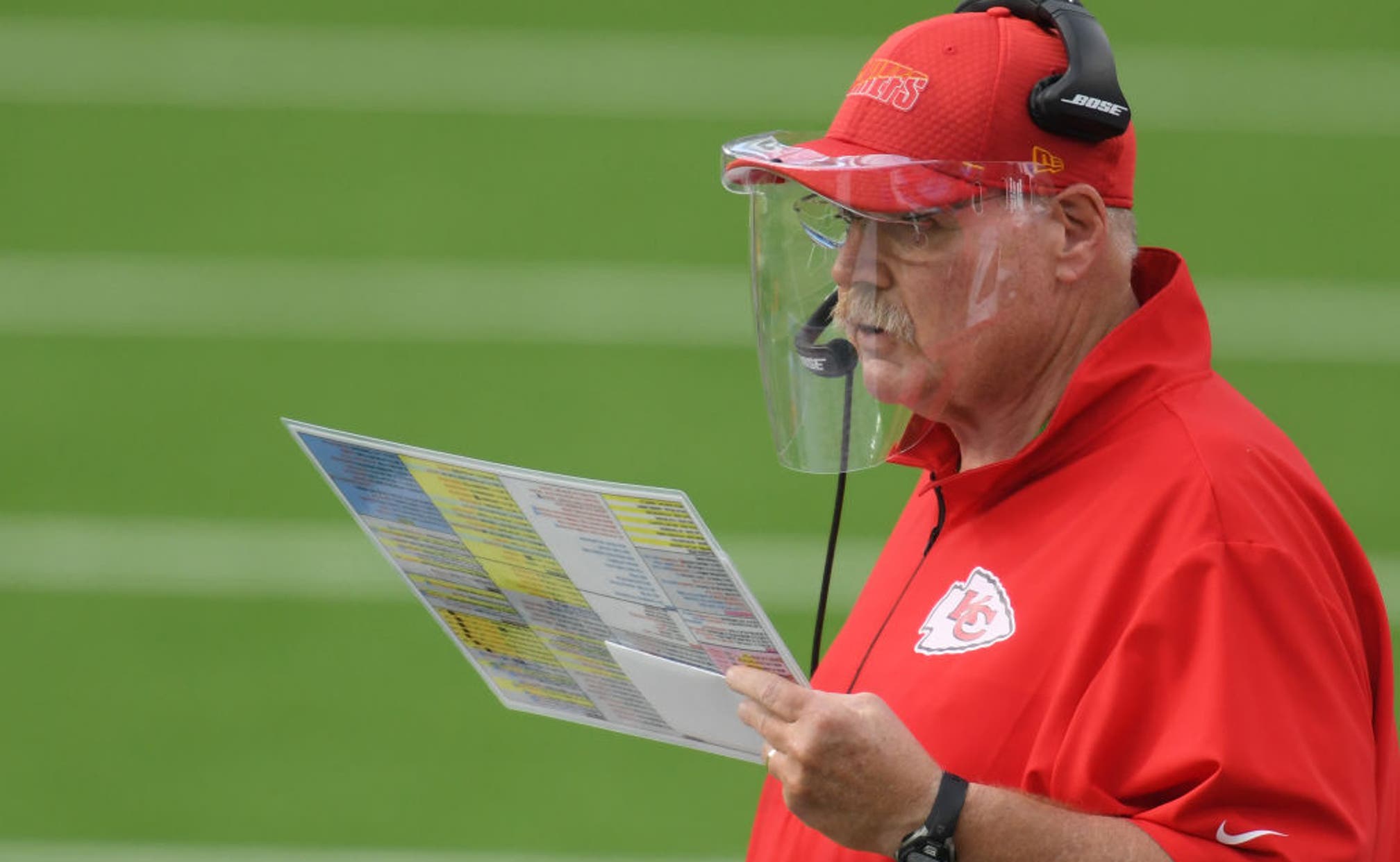 Welcome to The People’s Sports Podcast NFL Midseason Awards. The only awards show you’ll ever need!

Mark Titus and I had a lot of fun giving out very important accolades this week. We mailed Solo cups wrapped in tinfoil to each of the lucky recipients, but because I’m bad at using the post office, most of the trophies will probably never make it to the winners.

Here’s a handy list so you can yell at us on the internet about the choices you disagree with, but please listen to the pod for the full rundown and our very smart reasoning.

NOTE: Because I am the one writing this, I get to make fun of Mark when I tell you who his picks were.

Offensive Player of the Year

Cook is the only reason the Vikings are somewhat coming back to life. He now has had seven straight games with a rushing TD (which is the longest active streak in the NFL), he had a 200-yard game for the first time in his career, and he scored four TDs and did a Lambeau leap against the Packers.

The media has decided Russell WIlson has been overlooked for too long. Mark was afraid he would get yelled at if he didn’t pick Russ. So he picked Russ. Listen to the pod to hear the full rationale behind his reasoning.

Defensive Player of the Year

I’m worried this is too mean, but Gostkowski missed a game-tying field goal for the Titans against the Steelers. He also missed again against the Bengals. And remember when he missed 30 million kicks in the first game against the Broncos in Week 1?

Gostkowski used to be great, but making 61.11% of your kicks ... isn’t. I don’t want to say one player is the reason a team loses, but Gostkowski certainly has helped other teams win more than he has helped his own team.

Mark is a real LA Guy now, so he watches a lot of Rams games, and it has become clear to him Donald isn’t a man — he’s a machine. Hard to think of anyone else who comes close to his defensive prowess.

Coach of the Year

I just don't see how you can give it to anyone else. The Steelers are undefeated! In Tomlin’s 14 seasons as Steelers head coach, Pittsburgh has never finished a season under .500.

Tomlin has only won Coach of the Year once (in 2008), and I think it’s time he’s recognized again.

This man is doing exactly what he needs to do to get Trevor Lawrence. Which is to say, he hasn’t won a single game.

Rookie of the Year

First of all, I just really like the guy.

But the statistics back up my choice: Burrow was 26-for-37 for 249 yards and two TDs in the Bengals' 31-20 victory over the Titans in Week 8. His already bad offensive line was missing four of its starters, but Burrow still managed to scramble his way out of several sacks. He ended up third in passing yards in the entire league after that game, and he’s on pace for a rookie record 4,544 yards passing.

He’s also scared of scary movies, and so am I.

Mark made a great point: Usually someone as successful and cool as Burrow would be annoying by now, but Burrow has managed not to be. That, in and of itself, should mean ROY.

Mahomes had 372 passing yards and four TDs in the Chiefs' victory against the Panthers. His third TD pass of the game made him the fastest player to 100 career touchdowns. He has 25 TDs and only one interception this season, and is the second quarterback since 1950 to have at least 350 passing yards, four passing TDs, and no interceptions in back-to-back games within a season.

He also just makes throws that should be physically impossible.

Mark makes a great point — Joe Buck has called 35 percent of all NFL games this year, and he managed to do so while also calling the World Series. Truly a feat, and we’re not just saying this because we’re co-workers.

Mark’s reasoning is that the NFL.com vote for MVP on Tuesday had 14 votes for Russ, 13 for Mahomes, and 1 vote for Derek Carr cast by ... David Carr.

GM of the Year

Mark gave Bill Belichick the award and sarcastically said, “Can you believe 31 teams passed on Cam???"

It was a personal attack on me, Charlotte Wilder.

Holy S*** Moment of the Year

Daniel Jones’s run where he fell down untouched.

Quote of the Year

“I basically got fired yesterday and my day today consisted of Zoom meetings with the guy who fired me and sitting in a room with the guy who replaced me for four hours." – Ryan Fitzpatrick on being benched for Tua

“That was a real nice play, but unfortunately for me I would never be able to showcase that because Patrick, he never throws interceptions.” – Tyreek Hill on DK Metcalf’s chasedown of Budda Baker

Visual of the Year

Tom Brady holding up four fingers when he forgot what down it was.

Every shot of Jerry Jones in the box this season.

Phillip Rivers falling down as he tried to tackle Chuck Clark.

The Danny Dimes Run. Remember when Daniel Jones’ own two feet were too fast for him?

I loved this, because who among us hasn’t gotten overexcited by success and tripped over our own feet?

The Jets' butt interception. We saw beautiful redemption for the butt fumble when a Ryan Fitzpatrick pass was picked off by Marcus Maye, who made this interception by pinning the ball on his butt.

When I’m excited about not losing to the Jets, you know it’s bad.

Andy Reid’s foggy face shield...Mark and I finally agree on something!

Just adorable. We all need as many hugs as we can get this year.

I was very sad for the Chargers when they celebrated in front of the camera before realizing Justin Herbert’s touchdown was overturned, and they had lost the game.

There you have it, people.

Mark and I will be back in a few months with more awards, I think.